2016 has been a booming year for music events. We’ve had a healthy dose of international acts in both the big stage and in indie circuits; from Fête de la Musique to Paradise to Wanderland, gigs are a plenty where we don’t have to go far. Manila is becoming a spot for big bands to visit, especially to a rising middle class with a lot of expendable dough. We’ve been waiting to hear these acts live, and when the situation presents itself, the only issue is if we have enough money to spend.

And that’s the dilemma: money. How much money are we willing to spend for the experience of a live musical event? How much is a Coldplay ticket again? Between finally watching a band or artist live (with no guarantee of them returning to play ever again) and finally saving some money for once, the youth who are struggling to get some financial stability have a hard choice to make. Almost always, according to the experiences of myself and friends, it’s  gig over tipid. We’re definitely not part of the Save Money club.

Sleeping Boy, however, are having none of it. They made their own gig, with an international act to boost. 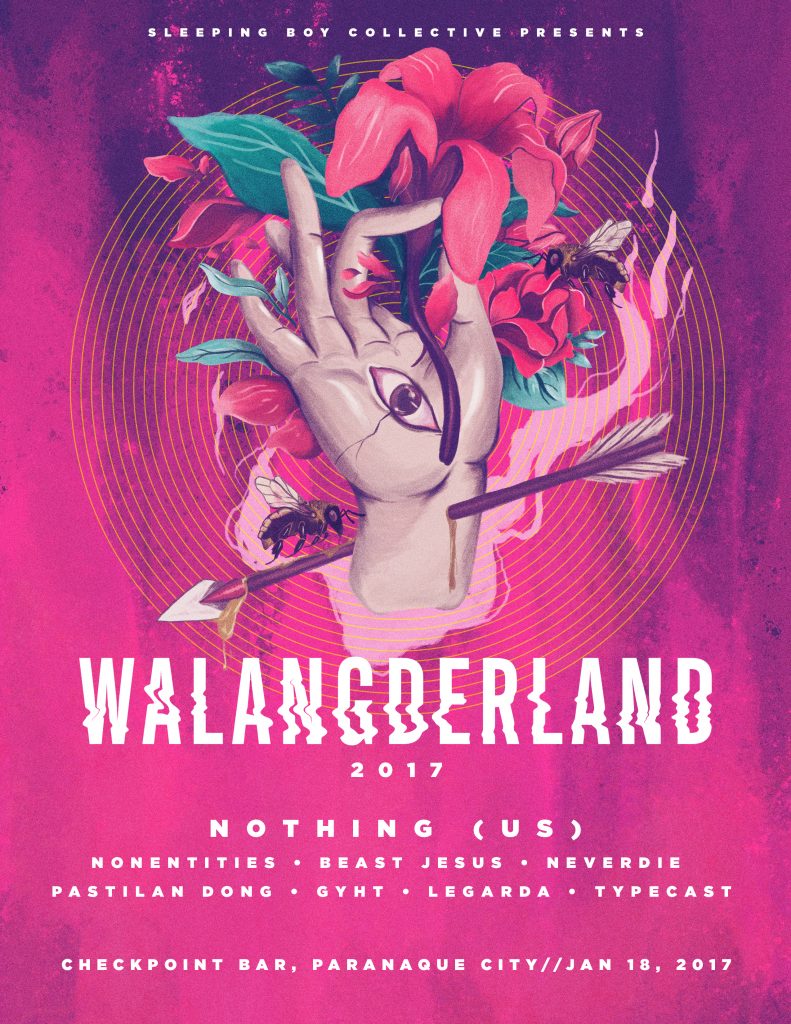 We talk to this semi-anonymous group about how they pulled it off, and what we can expect in Walangderland.

Who are the people behind this?
We are group of fellow-minded individuals sharing the love for all things DIY and and a strong belief in collective action. Most of us are rooted in the local hardcore/punk scene, but are very interconnected with many similar movements/groups here in the country.

How big of a scale is Walangderland? What are your plans? What can we expect?
It’s still a pretty small scale I think. The first one done early this year was made in Saguijo, and was borne out of a running inside joke on how much we usually can’t afford the tickets of the recent local musical events in the Philippines. We’re hoping this show will be an eye-opener for the rest of the folks to know that quality shows, by mixing the right blend of bands and crowds, can be definitely done by one’s own means if pooled together. We’ve been doing shows for touring bands under the DIY circuit for quite some time now, and we hope to further ourselves in what we can achieve in the next few years.

Aside from being a take on Wanderland, why Walangderland?
Kasi for the most part, walang pambili ng ticket. Hahaha. That, and we like to make shows accessible and reasonable by our own terms since it’s what we always wanted to do, that is to make our friends be able to watch shows instead of flying out to the next closest country (looking at you, SG and MY lol). It’s a tough road to be in at the start, pero the more we did it, the more like-minded people got attracted to join our side. Once we announce the ticket price, you’ll see what I mean

[pull_quote]We’re hoping this show will be an eye-opener for the rest of the folks to know that quality shows, by mixing the right blend of bands and crowds, can be definitely done by one’s own means if pooled together.[/pull_quote]

How much would Walangderland cost?
We don’t really think we’re aiming to be cheap. We’re too poor to produce anything less than the standards we’ve set for ourselves. We are aiming for the most reasonable pricing with the best audio quality we can provide (a good chunk of us are really into sound production), as well as an overall great experience for everyone. do keep in mind, crowdsourced siya, so what we give is the best that we got. The range, if you have to insist, will be lower than 1000 pesos.

By crowdsourced, do you mean people will pay first?
we essentially secured the initial funding and resources by reaching out to our own pockets as well as our networks, so everything that needs to be done at the backend is already accounted for. We hope that our future shows can be secured by a true blue crowdsourcing manner, pero for now it’s all about trust and belief by our folks on what we have done and what we will keep on doing.

So there is a chance of losing money, right?
We are a dangerous bunch, we’re only aiming to break even lagi. Which is why we don’t go out of our circle that much, kasi on our own, masaya na kami na nadadala namin yung mga bands na gusto namin mapanood. That potential loss, in essence, is still cheaper than having some of us booking a flight + accommodations to the next closest country that these bands are touring. We just have to keep proving that it’s a worthwhile activity for everyone involved for it to grow and continue.

Given that, are you still willing to branch out to different genres?
As long as malapit sa DIY scene, or their ethos are similar to ours, okay lang.

Check out more about Walangderland and Sleeping Boy here.

SHARE88rising shocked Filipino fans when their latest label arm decided to put down...

This is what a solid night vision is made of