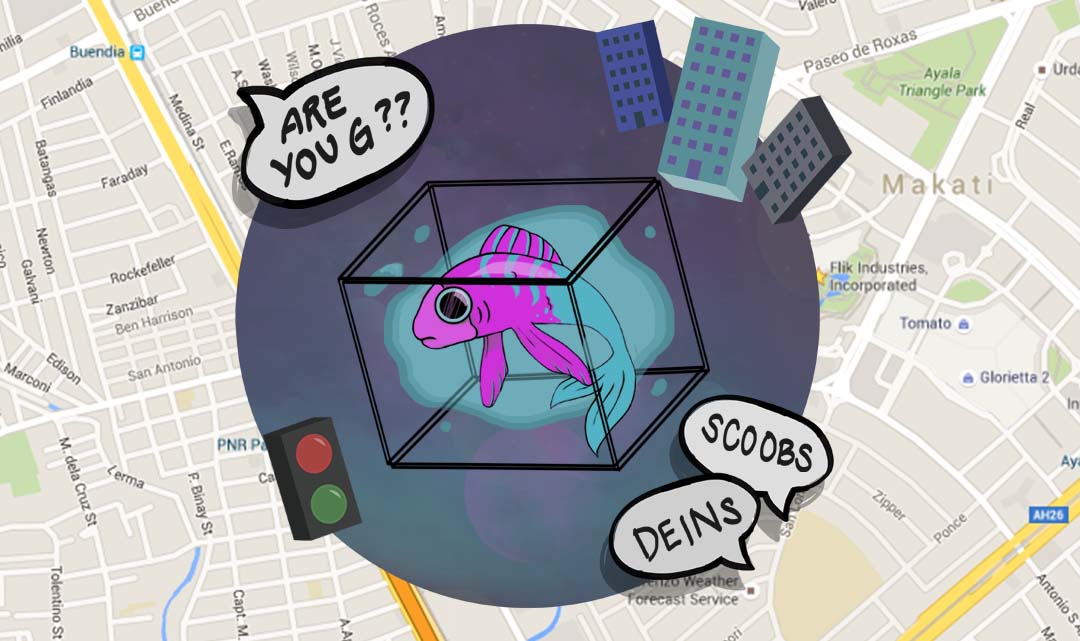 I can still remember the moment when a friend from college said, “Are you G?” and I just stood there, dumbfounded, thinking, “What the hell does ‘G’ mean?”

It was mortifying, not being in the same wavelength with a person who’s about to become your very first friend on your very first day of your very first year in college. Dressed in new clothes and new shoes, I was supposed to feel cool and in control of whatever may happen to me. Too bad I turned out more like a trying-hard rich kid with a noob level in conyo speak.

It wasn’t just the G word that had me stumped. There are more words like “deets” (details), “deins” (no) and now even “scoobs” (from the word “deins” referring to the breed of Scooby Doo, who is a Great Dane). There are even shortcuts to Tagalog words like “medj” (medyo) and “pweds” (puwede), and expression words like “gags” (gago).

It didn’t work too well for me in the beginning. The dialect stands out too much and it’s too intimidating being with rich kids and their conyo speak. Trying hard wasn’t the key to get these type of people to like you, it’s all a matter of first impressions and how willing you are to spend at least three hundred pesos to eat at this fancy restaurant serving burgers and fries. Being like them wouldn’t work either, not when your phone’s a Nokia and lacking a front camera because how else can you upload on Instagram and check if your feed’s aligned with your color motif of the week?

Not everyone’s born with a silver spoon. Not like me who grew up in a place with only two-lane highways, one three-star hotel, and one SM mall that has half of its third floor vacated. We didn’t even have KFC until 2013. I was ignorant of the luxuries of the city with its tall, glass buildings, historical landmarks that we only hear in textbooks and imported goods that we only see on television. Every time my family and I would travel all the way to Manila I would whirl my head around the neatly lined shops and drag my mom to a toy store, amazed by the extravagance that people in Manila get to see and have every day.

As I grew older, going to Manila became a natural leisure experience. The awe was still there, but there was also fear. Fear of catching up to these people nurtured by a more modern and liberating culture that greatly contradicts the conservative upbringing we had in the province. I was a nervous wreck when my first day in college ended. I went home early and talked to no one. Being alone became a common occurrence, and dinners were frequently spent inside my dorm room with Ted, Robin, Barney, Marshall, and Lily keeping me company through seasons one to nine.

It wasn’t the life-changing experience that would drive me to succeed more, but the harsh reality of a small fish trying to swim in a big, deep pond. Nevertheless, the heart and mind of a probinsyano is patient and optimistic. We want to work harder than anyone else.

Probinsyanos will always get lost in the city. We’ll wander and waver and miss the fresh breeze of air untainted by the limitless number of cars clogging the wide highways and lanes. We’ll miss the food that we grew up with and our very own slang speak that only people back home will understand. We’ll miss the safe and clean streets that we can stroll along to until the wee hours of night. We’ll miss being comfortable in our skin and culture, to lose the façade of us being tough and confident and act like someone we’re not. There’s so much to miss but more so if we don’t even try to survive in the city. In the way our generation speaks right now, the struggle is very real.

If there’s one thing I learned in the unforgiving environment of Metro Manila, you have to persevere or endure. Don’t suffer the consequences just because you’re too shy to approach someone and say what you have to say. Strike a conversation and baffle them with your bullshit. But every now and then, the simple life of living in the province is better than trying to fit in a reality you never belonged in.

And it doesn’t even break the bank