It all started with a meme. And we millennials all know this meme’s source material by heart—a somber Derek Ramsay, a thief illegally recording a film showing in a theater, a woman squealing in surprise when the tomatoes she’s holding are knocked out of her hands by the running fugitive. Intense, but laughable and unnecessary drama. Pare, pulis ako. 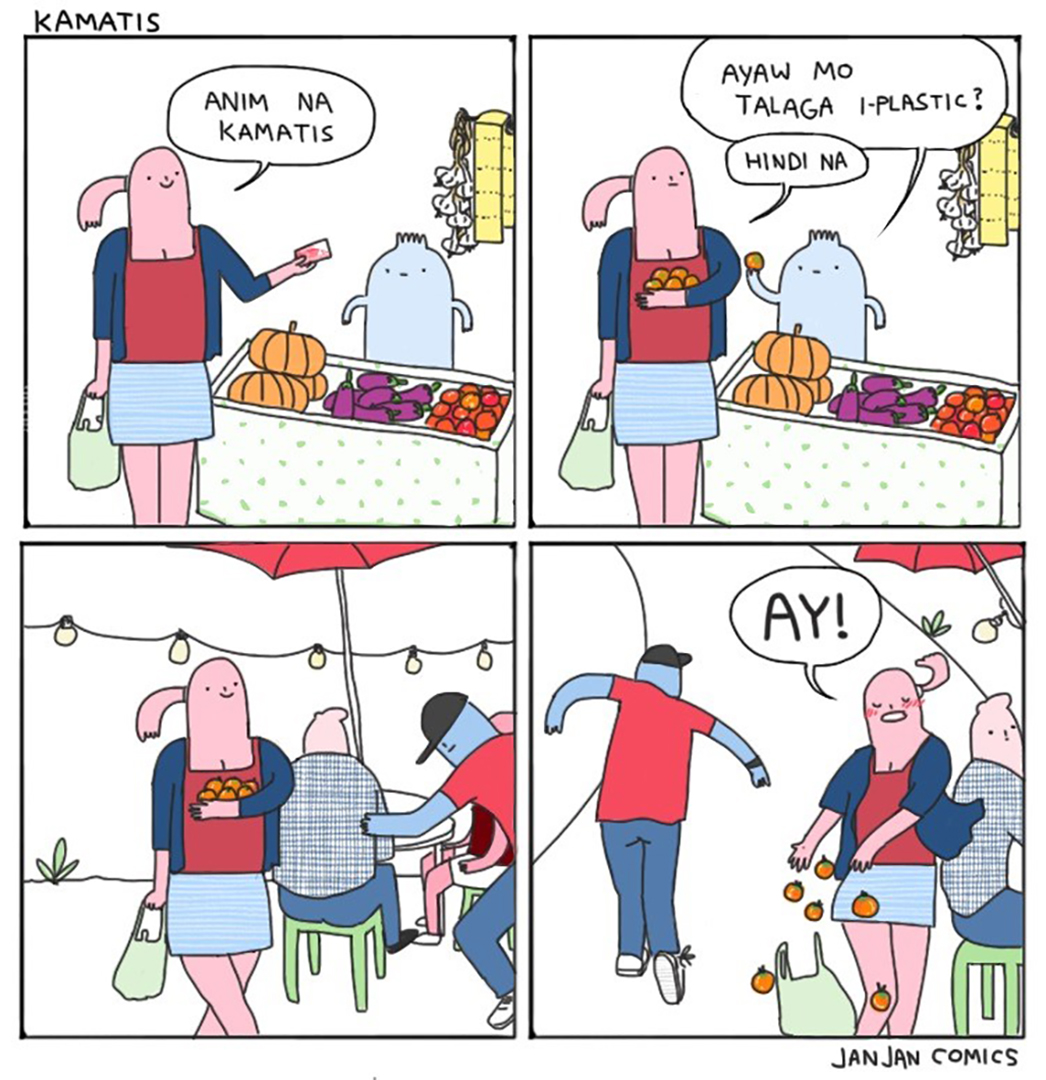 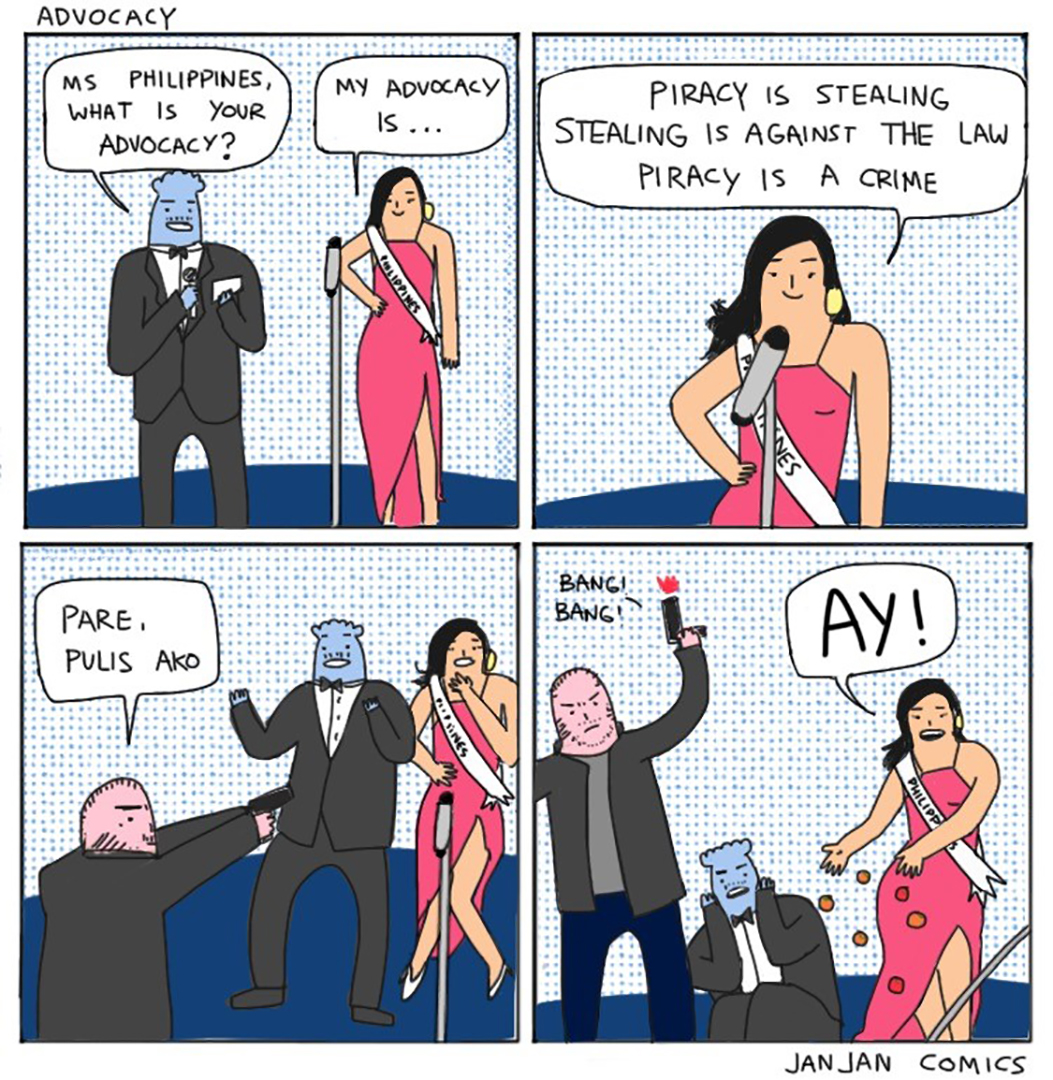 When this local phenomenon of an anti-piracy advertisement began gaining more traction online thanks to multiple Photoshopped memes, artist Juris Go seized the opportunity and cooked up a piece for Janjan Comics, his weekly webcomic series. “Kamatis” is a four-panel comic centered on the woman’s odd lack of a plastic bag for those iconic spilled tomatoes. A few days later, which was around the time the Philippines hosted the Miss Universe pageant, Juris released another comic titled “Advocacy,” which cleverly merged elements of the Derek Ramsay anti-piracy ad with the Miss Universe hype.

Janjan Comics blew up online after that. The series follows the adventures of original character Janjan as he goes through the average Filipino day we’re all too familiar with—taking a full MRT train, facing critical titas during family reunions, getting stuck in EDSA traffic. “I was surprised [after it went viral]. I’m very thankful, because before the “Kamatis” thing happened, I had trouble getting an audience,” Juris says. “I’m glad that there are now people who look forward to my comic and I am more motivated to make them.” 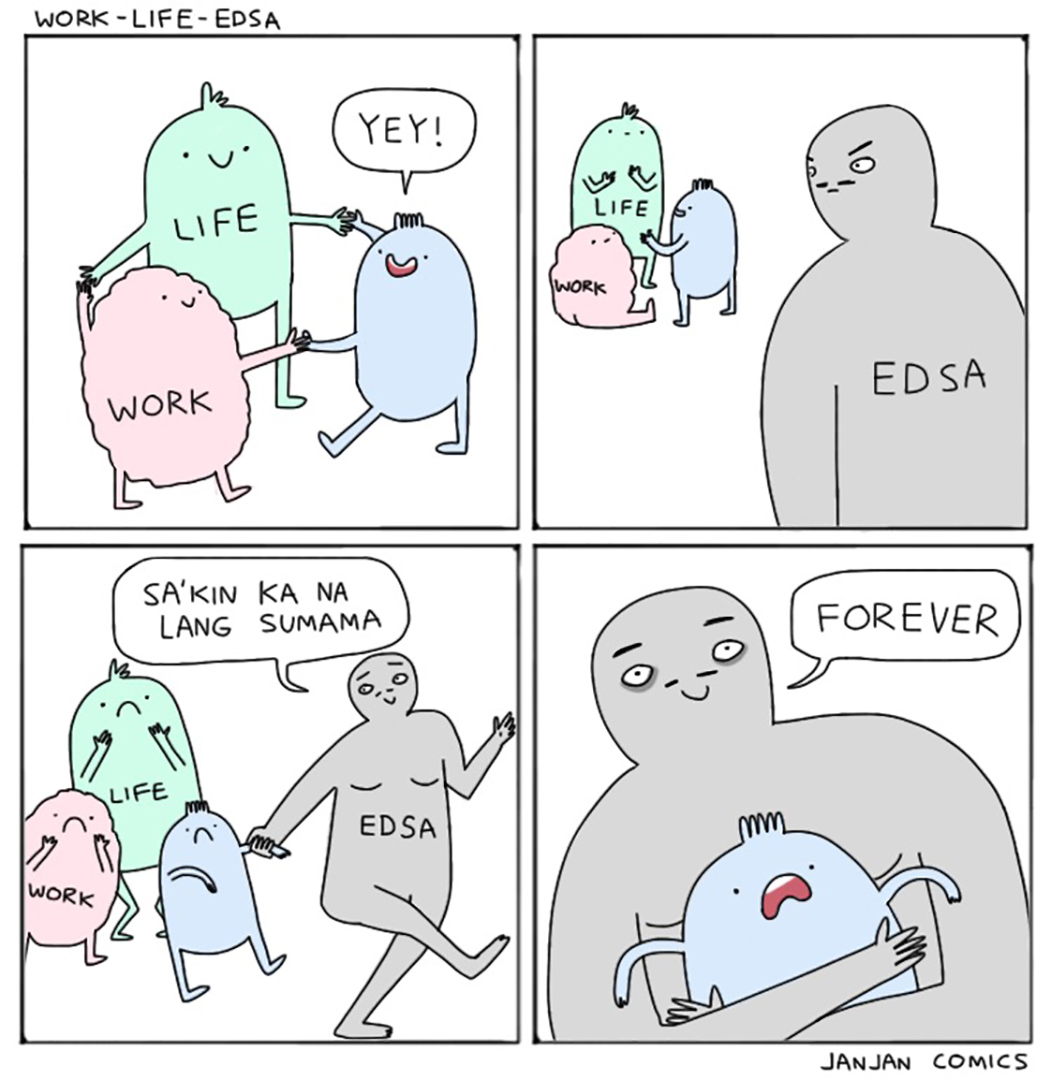 Juris has been drawing since he was five years old. Back in high school, he joined art competitions and continued to hone his talent for drawing up until his days in De La Salle University, where he took part in creative organizations like Malate Literary Folio and Green Media Group. Anime series such as Dragon Ball, Ghost Fighter, and Pokémon influenced him throughout his childhood. Juris was also exposed to the aesthetic and humor of Tumblr, of which he was an active user in college. 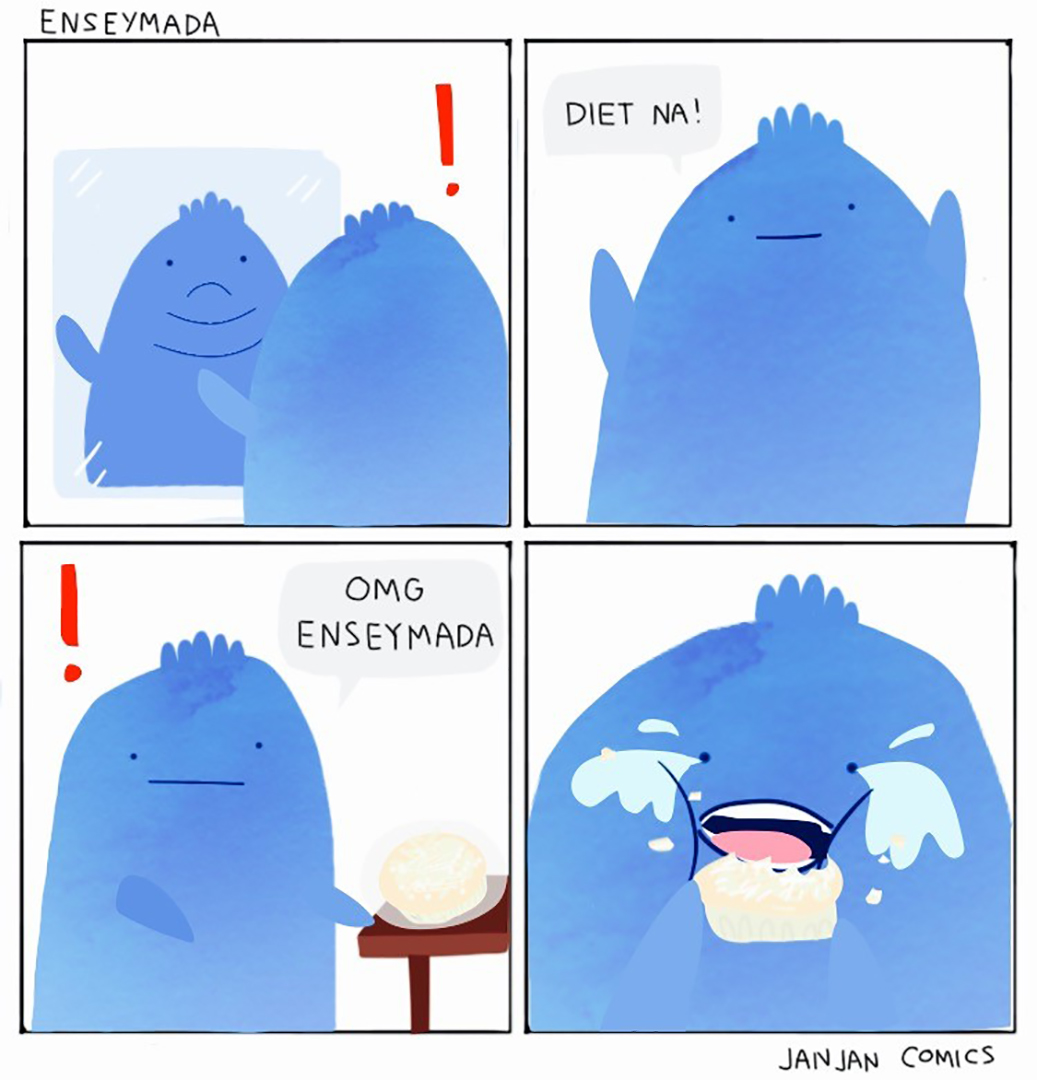 Janjan Comics started in November 2016 after Juris got ahold of a stylus and the Tayasui Sketches app. He eventually decided to go full-on digital. What makes his webcomic so appealing to the Filipino and millennial audience is its relatable local (and sometimes pop) culture references. Juris’s simple, colorful art style and use of language make his comics easy to digest and wildly sharable on social media. The character of Janjan himself—which Juris shares is a reflection of his inner curious, innocent, and honest child—is an adorable protagonist that the average middle-class Filipino can easily identify with.

On his command of Filipino humor, Juris says, “Filipinos are wittier. I think our culture has a higher standard of funny; our humor is so good. I guess that’s what happens when your country’s median age is 22. It’s exploding with jokes everywhere that no other people on Earth could understand. I almost feel sad that they’re not in on the fun we’re having.”

“Filipinos are wittier. I think our culture has a higher standard of funny. I guess that’s what happens when your country’s median age is 22.”

The world of webcomics itself is slowly beginning to expand here in the Philippines, with the likes of artists Rob Cham, Hulyen, and Asshulz creating distinctly Filipino art. Juris has earned himself a top spot in the local scene thanks to his widely spread work. “It’s awesome. There are so many [local comics] now and it makes me happy that we’re creating our own culture. I see a bright future for us,” he says. “I’m actually a fan of Hulyen’s Ugh series. They are so precious, offensive, yet sincere. Before I started making Janjan Comics, I read an issue of Scout about Rob Cham’s success and it gave me the push to make my own comic.”

The heart and soul of Janjan Comics, according to Juris, is actually his own everyday experiences, no matter how average they may seem. One doesn’t need to lead a spectacular life to create extraordinary output. And we see it in Juris’s funny but honest work. His tips to the aspiring cartoonist? Be positive and live in the moment.

“Creativity is a muscle. The more you do it, the better you are at it. Having a regular schedule for Janjan Comics is one of those things that keeps me thinking of stories to share,” says Juris. “[Staying creative] is basically just being in the moment. The more I experience life, the more life there is in my art. That means going out with loved ones, having time for myself, having a healthy work-life balance, and embracing circumstances I’m given.” 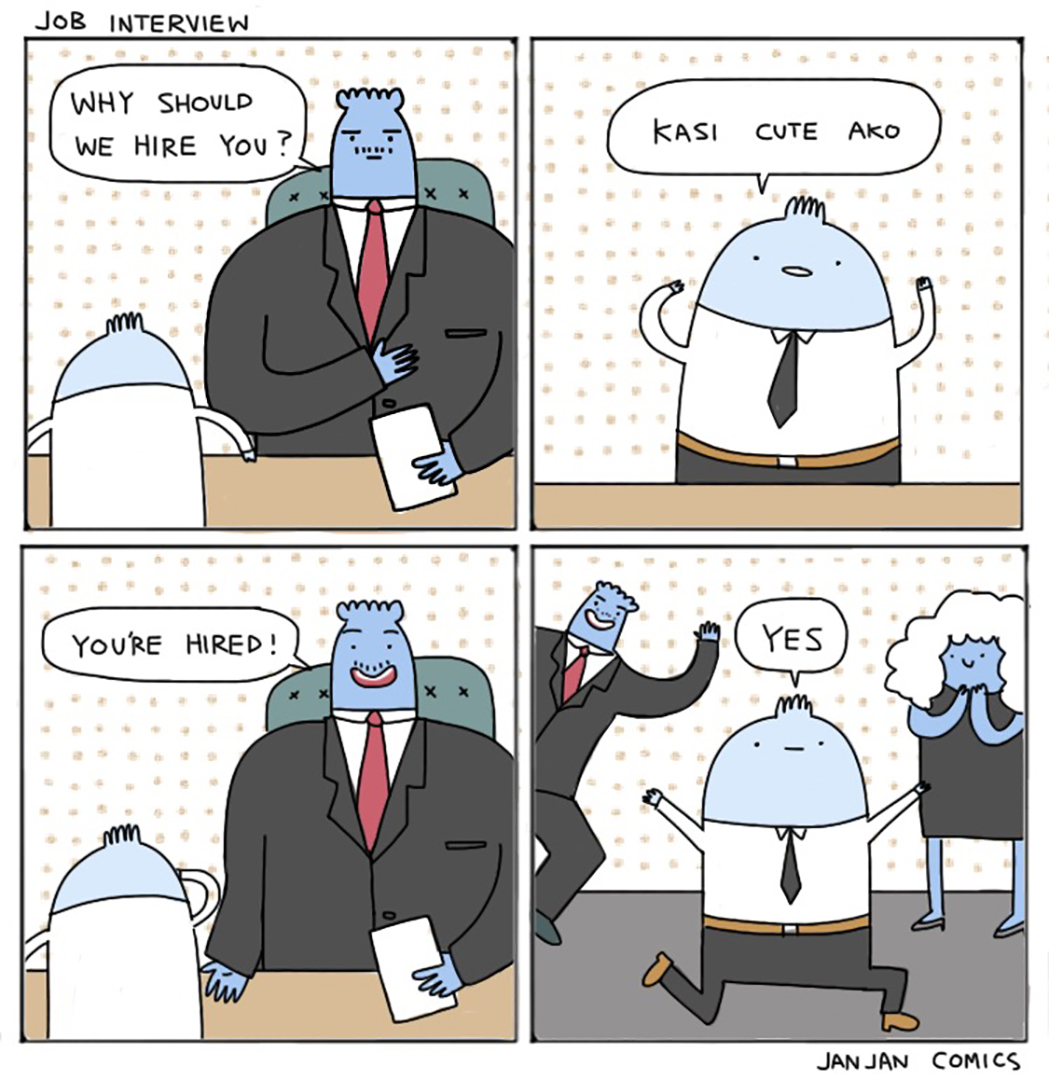 This story has been published in our May-June 2017 issue and has been edited for web. Follow Janjan Comics here, and check out the full issue here.

SHAREAkira is making a huge comeback! Now, we’re not just getting a live-action...