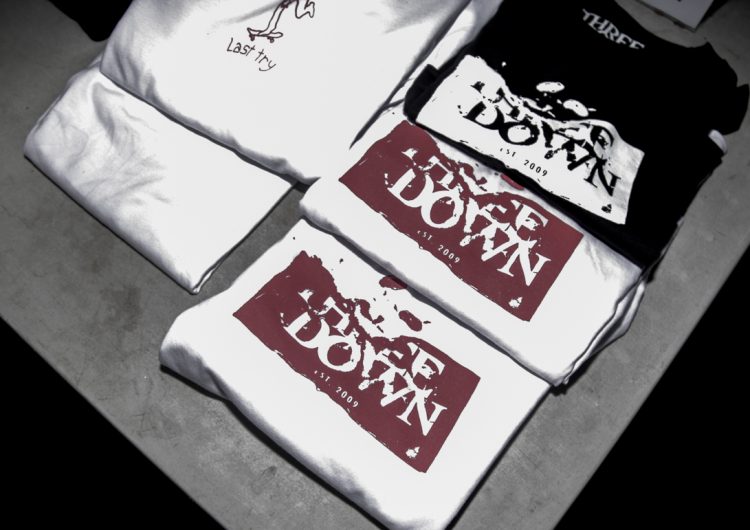 “Last try.” This is what a skater says before he attempts to perform a trick he previously failed . A cry of determination, adamant at achieving his goal. He would say this 50 times over until he lands the trick. A perfect phrase to allude to Threedown’s never-say-die attitude.

Incepted in 2009 by Ken Yamaguchi as a blog, Threedown grew into a clothing brand by 2011. Threedown has been a mainstay in the skate and BMX scene. Their eye for design and lifestyle has amassed this streetwear brand a cult following garnering over 20,000 likes on their Facebook page.

It was evident at their event where the venue had to be shut down mid-event because of the influx of attendees. Every single person inside the venue was asked to leave and people of different styles filled Kamagong street. Loitering and mingling among themselves while waiting to re-enter the venue for the event, I stood in awe as I looked around and witnessed this great spectacle. Threedown definitely has a loyal following.

Their newest collection debuted at the event. A pair of tees, an L/S, and my personal favorite: a beanie with the classic Threedown logo.

The brand also served as a platform for artists of different talents. Showcasing a photo exhibit along with their release. A gallery was put up with works from Vermont Coronel, Erika Yamaguchi, Franco Borromeo, Mong Feliciano, Aly Mananquil, Mhar Udarbe, Joshua Subeldia, and John Crawford. “Masaya. Sobrang saya.” Josh Subeldia, better known as Tofu, shares about his first photo exhibit. A sentiment that was consistent among the photographers I interviewed about their inclusion in the Threedown gallery.

The night started with DJ sets from Zerzac and Butta B. Playing well into the night, creating the atmosphere for the place. You could tell from the crowd’s feverish behavior that they were ready for a great night. Mosh pits matched the beats of the music. Dancing commenced where there was space to dance. You could hear the crowd sing along to the lyrics of the song. A perfect set-up for the night’s performances from a heavily packed line-up of Rjay Ty, Alex Omiunu, Ron Henley, Shanti Dope, Peaceful Gemini, Owfuck, Baryo Berde, Indio, Waiian, and the underground hip-hop movement Rekta sa Kalye.

I wonder if this is the sum of Threedown’s “last try’s” as a brand. An event to show how much they want it. How much love they have for what they do. And how they’re never going to give up. This is the type of fruits you reap from hard labor. Nine years into what they do, they have maintained their identity and left people clamoring for more. Threedown will continue persevering and thriving through whatever that comes at them. They’ll be steadfast and when there’s an obstacle across their path and they fail to overcome it, all they will say is “last try.”

Listen to this: Lego released a seven-track playlist meant to inspire a moment...