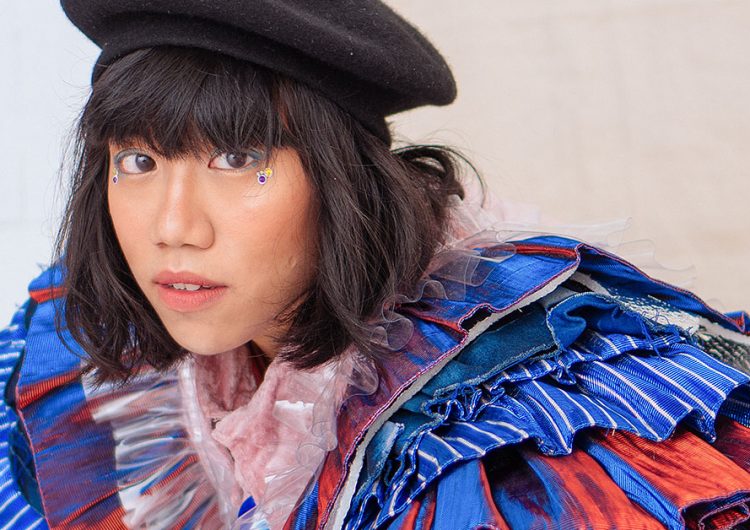 When Joee Mejias isn’t teaching production design at the College of St. Benilde, doing some projection mapping for clients, or collaborating with cohorts on projects like new media festival WSK or art platform HERESY—she’s a co-producer for both—she makes music as Joee and I. It isn’t her alter ego, or an evil twin, or a better half. According to her, it’s a totally different person.

It’s hard to explain Joee and I’s music in the simplest terms. Even the genre that her music is in, “avant-pop,” fails, because what is the first reference that comes to your head when you hear the word “avant-pop”? If it’s Björk, then that’s no bueno, because Björk is not Joee and I and Joee and I is not Björk. Joee and I isn’t an attempt to sound like Björk, or any other artist for that matter.

“Her music is otherworldly and pure, but it has a tendency to challenge your listening sensibilities in a weirdly entertaining way,” says Ian Urrutia of The Rest Is Noise PH. What makes Joee and I stick as a musical project boils down to how fully fleshed out her vision is. Videos of her performances from her personal YouTube channel convey the feeling that a new world is unfolding before your very eyes. The use of music, production design, and a little bit of theater help weave together the world of Joee and I.

What’s the story of “To the End Of the World”?

The album is about a journey of finding something, going to places but you don’t really know where it is. There is a start and an end, but the end is more of an acceptance of the whole cycle.

When you perform, it’s more of an audiovisual performance. How much of it is you? Do you produce everything by yourself, or are there collaborators?

Collaborators are very important to me. Like Jeona Zoleta, she’s a visual artist, so sasabihin ko sa kanya ’yung story, tapos I let her make something. Kunyari “Jeona, I want islands floating” then she’ll come up with her own version of islands. Ganoon siya. And for projection, I get Mvltiverse, or sometimes it’s my projections, and I ask someone to play it. Pati ’yung banda ko, they’re not regulars. Energy is important for me.

’Cause most of the time, my shows are improvised. Minsan lang kami mag-rehearse, parang the day itself lang. So parang this is the song, and my songs are repetitive, so sinasakyan nila ’yung structure. I build the structure and they just do whatever they want with it.

Conventions in the realm of art have been broken, rebuilt, and broken again and again. To intentionally be different in an effort to say something new isn’t really saying much.

That said, the appeal of Joee and I’s music lies not in the fact that it’s not just different from what we usually hear on the radio, Spotify’s Discover Weekly, or YouTube’s recommendations (depending on what you’re initially watching, really), but in how it is different. The music of Joee and I is effortlessly unique—a testament not only of Joee’s artistic background in music and theater but also to a clear reflection of her personal passions.

How would you describe the sound you want to achieve?

I think it’s more of a collage. Usually I start with a sound, because I record sounds.

Yeah, field recordings. Sometimes it starts from there, field recordings that I’m playing with a kalimba, or whatever instrument I pick up whenever I travel. Or I record my friends, and they have riffs that I like. And then I would put them together, so it’s more of a collage of sounds and storytelling.

It’s really on the spot when I write it. That’s the sound I’m looking for that has that story I’m trying to tell, and most especially with the sounds I collect. Then I connect them to something manufactured like electronic beats. I really wanted the song to depend on the story I want to share.

If it’s a dream, it’s that feeling of being in a dream. Or sometimes I want this song to remind me of this place, and the things that I wrote there.

Do you intentionally choose instruments that are uncommon? Especially instruments like the kulintang?

’Yung kulintang I used it for this song called Kidnap. Yeah, it is intentional. When I go to a place, like the palengke, tapos maghanap ako ng instruments nila like bells, and then I would record it and place it on the song. So pwedeng after ko siya i-pla–place. Parang i-record ko lang siya kahit ano, tapos after gagawin ko siyang kanta. Or the other way around. Parang ito na ’yung structure… ay, gusto ko ng ano dito, ng kulintang. It’s more of the sound that I’m after. But for the kulintang it’s a special case. I want that… Wala kasi tayo ’nun eh!

Yeah! Our contemporary music is still very Western. Because with our popular music that’s always been our tradition: to follow the West.

And you want to go against that?

The closest we have is Grace Nono. How do I explain it? It’s not like in Indonesia where the gamelan is used in every genre. May gamit ’yung tradition nila. Or like in South America, even their modern rap, or pop. Meron siyang fusion ng tunog nila. In the Philippines, we have that sound but it’s very Western. I kinda want to incorporate some of that sound that’s coming from here pero in a way na parang ’di siya masyadong thematic.

The music of Joee and I is effortlessly unique—a testament not only of Joee’s artistic background in music and theater but also to a clear reflection of her personal passions.

“To the End of the World” was released February this year, but it is far from done. Some of the songs from the album had been performed years prior, and in some way, are accumulations of her past work dating back from when she started making beats in 2005.

Joee’s experimentation with sound is structured and focused in Joee and I, but “To the End of the World” is not the tipping point but a huge addition to an evolution in sound more than a decade in the making.

Whether the music sounds haunting (White) or bizarrely entertaining (Teknobalat) or soothing (Pebble Beach), in the heart of Joee and I’s music is a knack for storytelling brought by an earnest desire to connect with an audience: an open invitation to be transported to a place that’s familiar but foreign at the same time. It’s a gust of whimsy piercing through you, a dream unfolding right before your very eyes. Listen attentively and you will be rewarded. Keep it in the background and you will be soothed.

What do you want your audience to feel when they “witness” your music?

I don’t care if they say, “Oh, I really liked your track.” I’m not after that. It’s more of… you know, magkukwento sila tungkol sa panaginip nila.

When they can relate.

Some of the people who watched would come up and say, “Oh you know I remember something, I lucid-dreamed.” And they would tell me about their dreams. And they’d say they went to another place.

You mentioned that you wanted to add a couple more tracks or you want to change some other tracks in your current project. How do you know if a song is done?

Do you think your songs are ever finished?

It really takes some time to develop a song so what I do is pag may gig ako tapos meron akong medyo bagong hilaw na tunog, ipipilit ko siya. And then, pag na-per-perform ko na siya, start na ’yun. That’s the start of the development of the song. And it should end in the studio, right? It doesn’t.

SHAREHey, fellow commuters! Our daily grind just got greener and it seems to...