Street art is an unconventional kind of beauty. It isn’t as straightforward as when you line up for an exhibit or see art framed on a gallery wall, but it is in the way street artists, with their aerosols and paints, can turn even the murkiest corners of the city into their canvas.

However, street art wasn’t always this way. In the past, street art was just seen as vandalism or scribbles on a wall by some hooligans. Its lesser known but deeper purpose however has always been anti-establishment—challenging commercialism, capitalism, the government and other societal issues.

Affluent art aficionados and, well, the general public, look down on this medium because of its association with ghetto culture. But over time, street art has evolved, and the craft has now been elevated and widely appreciated.

With the public and disruptive nature of the art form, though, many still ask: Should street art be protected by copyright? What if it was in the backdrop of your photograph—is it your responsibility even if it was just out there?

The debate on legality of street art

The internet has made it easy for anyone to become an artist with an audience. But with this convenience, it becomes just as easy for works to be stolen and reproduced by companies, especially if the infringer is a corporate behemoth preying on a small-time brand, which happens a lot in fast fashion.

More often than not, artists who cry foul against big corporations are ignored or offered a settlement. And so companies carry on in their ivory towers, bad practice after bad practice. In the best case scenario, the story spreads online and the internet public bestows you the title, “Cancelled.”

Case in point is H&M, who took legal action against LA-based street artist Jason Williams after the latter filed a cease and desist order against them for using his work as a backdrop for one of their campaigns. However, instead of taking down the photos, the retail giant had the nerve to file a lawsuit stating that the work should be void of copyright protection because it was painted illegally in New York City. Not surprisingly, this prompted backlash from the street art community by saying that the lawsuit is an attack on artists’ rights and called for a boycott.

Note: H&M got to their senses and eventually withdrew the lawsuit, but the reactions and repercussions weren’t pretty.

On artistic freedom and security

While the H&M vs Jason Williams case happened in the U.S., it can very much happen in the Philippines too. We have talented art collectives like Pilipinas Street Plan, one of the leading forces in the booming local street art industry. Any one of their artists or any Filipino street artist for that matter, could be another Jason Williams. Can you imagine social media influencers —who are paid thousands by PR companies—posing in front of these painted walls for “branded content”? The artists would be lucky to even get a name’s mention beyond the standard and vapid “artsy!” caption. 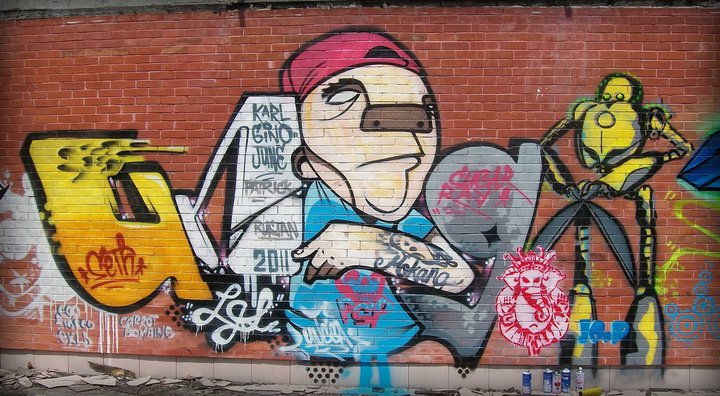 But thankfully, our country’s copyright laws cover street art. For all its shortcomings, at least the Philippine Constitution is doing this one thing right, right?

An awareness of the intellectual property rights and knowing that each artwork is the product of hard work, time and skill should be enough to push these big brands to collaborate with artists instead of stealing their ideas because they have the iron fist to.

In a nutshell, the Intellectual Property Code of the Philippines (RA 8293 for extra reading) states that literary and artistic works are copyright-protected from the moment of their creation, regardless of their content, quality and purpose. The Code provides a list of unprotected works but no mention of graffiti or ‘illegal’ writings.

While it’s good to know that we have laws in favor of artists, brands should take it upon themselves to understand that ideas aren’t free-for-all. There should be respect for the art industry, the art works and most importantly, the artists themselves. An awareness of the intellectual property rights and knowing that each artwork is the product of hard work, time and skill should be enough to push these big brands to collaborate with artists instead of stealing their ideas because they have the iron fist to.

A responsible and mindful consumer base

Things are looking up with more mindful millennial and Gen Z consumers. They’re socially conscious and give a shit about labels like “cruelty-free,” “sustainable,” and “ethically made.” They are willing to invest more in purchases they consider valuable choices—this includes going for brands with integrity.

Because of this increasingly conscious consumer base, it doesn’t take much for brands to be exposed for malpractices and suffer from worldwide backlash and boycott movements. This, of course, includes copyright infringement.

The internet is an unforgiving place —a lesson learned the hard way by Zara, Nasty Gal and many others. It has given artists a voice and a platform to fight for their rights, while gaining allies on the way. It’s about time corporations listen up.

SHAREOne of the hardships of lockdown life are Schrödinger’s stores. What do we...

SHAREEverything about this year’s edition of Fête de la Musique (or World Music...