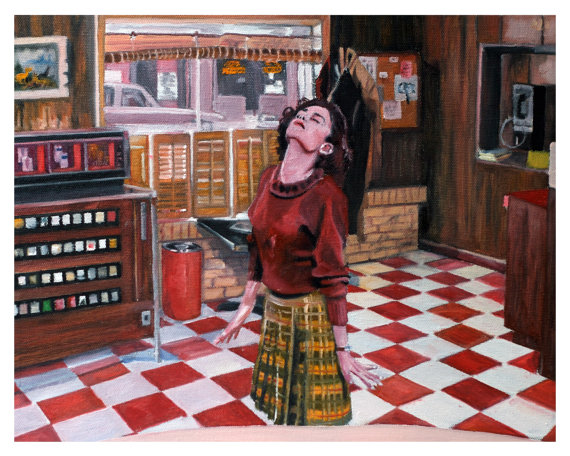 How long does it take you to create an oil painting? For some of the artists I know, the answer can range from “a few weeks” to “when it’s finished,” and it’s usually the latter. Now, this LA based artist wants to throw time out of the window by creating an oil painting a day, for the whole month of June.

According to the AV club, artist Kevyn Schmidt came up with the idea at a Bernie Sanders rally where he was asked to do an oil painting on the spot. Three hours in, he was finished and he thought to himself, “You know, I could probably do a new painting every day,” and so he did.

He then proceeded to buy a month’s supply of canvases and went to work.  You might be wondering, sure he can just put something together Jackson Pollock-style and call it a masterpiece, but it turns out that he had a plan all this time. Focusing on cinema and television, Kevyn painted notable figures from Batman, Game of Thrones, Back to the Future, Fargo, and the Big Lebowski and he promises that more are coming. “I have a huge list of movies and shows I want to paint. It keeps getting longer and longer. I typically know the moment or actor I want to paint immediately, some part or character will just jump out.”

4! I’m still going strong on my goal to paint a new oil painting every day in June. This one took a lot longer than I had hoped but I think it was worth it! Check out the link in my bio if you want to support my effort and get a chance to buy or win one of these! #backtothefuture #30in30 #fanart #oilpainting #oiloncanvas #michaeljfox #hillvalley #martymcfly #mydensity #art #calvinklein

SHAREBy Celene Sakurako Halloween is still seven days away, but if there’s one...

SHAREMore often than not, any syllabus to a literature introductory class will have...

SHAREHelp! Help! Our precious memes are in danger. Thanks to EU’s Article 13,...