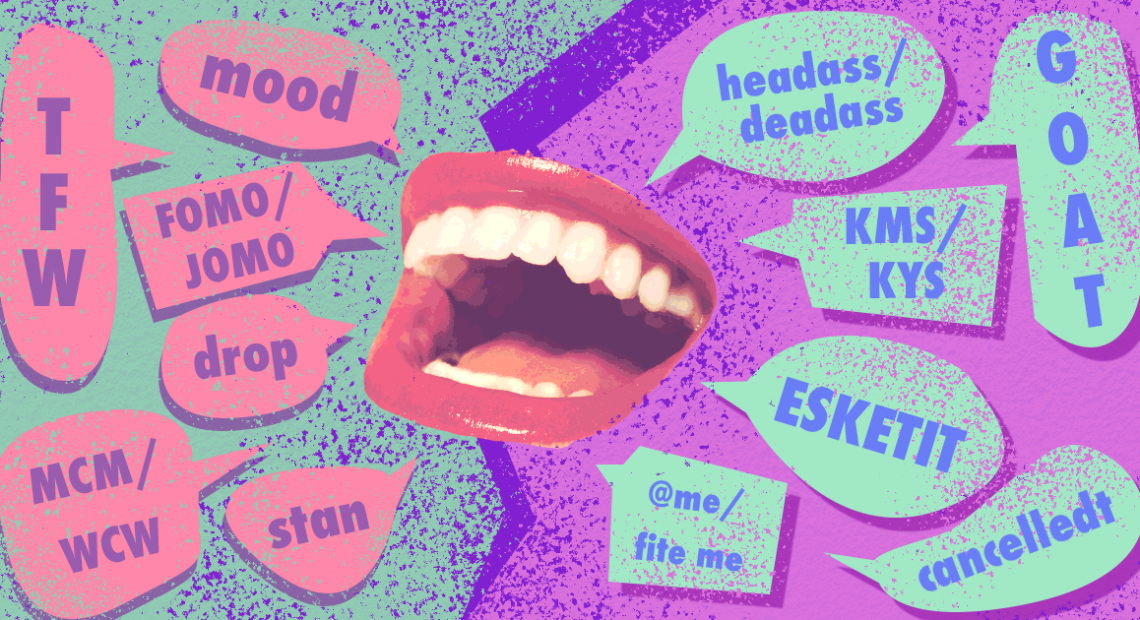 We’ve done it before, and we’re bringing you a new version of Millennial Glossary. As people of the internet, it is within our diligence and constant responsibility to be heedful of our expressions. No, this does not mean you cannot cuss nor do you have to perpetually observe euphemisms. Are you kidding me? In this borderline-anarchic, free digital world? Uhh, we are not your mega-conservative Catholic School. We’ve listed down some words to keep and to trash. Anyway, it’s only halfway through 2018, so your internet vocabulary can still be salvaged.

Words you can keep

It’s an efficient way of summing up what you feel in life. If letters were currency, you’d have saved up a lot of money. It’s like seeing the crying face meme of Kim K on a bad day and saying “mood” since you’re having a shitty day as well. Your friend who’s having a similarly bad day would likely comment, “same.” We say keep this, honestly just because same.

Since the start of fandom era, many fans have created their OTPs (one true pairing) and continuously sailed the ship. As this ship evolved, fans have started to root for their favorite celebrities without the need to pair them with another. Stan, as they call it, means undying love and support for someone. We’d love to keep this word in our vocabularies because it boosts individuality and empowerment. We stan stan.

We’ve been hearing this word a lot since quite a few artists are coming out with new material. This term isn’t exclusive to the music industry as this term is also used when streetwear brands come out with a new line or collection. We say keep this, because who doesn’t love some good drops? Plus, it’s a revolutionary way of burying drop’s relation to the illegal drug.

MCM stands for “Man Crush Monday” while WCW stands for “Woman Crush Wednesday.” This originated from a Twitter trend, where users share photos of their crushes or people they find attractive during the said days. Over time, it’s evolved to a slang that’s independent from Monday and Wednesday. Nowadays, it’s become a catchphrase for memes. For example, “Your mcm listens to future but doesn’t have one.” We say keep this with reservations, because we need to come up with a new term that isn’t gender exclusive.

TFW refers to “that feeling when,” which is usually followed by an elaborate instance and the perfect gif to describe it. We say keep this, because this is the youth’s new way of expressing small truths and sharing experiences. It’s like a concise internet way of storytelling.

FOMO or the “fear of missing out” has been there for quite some time. It happens when there’s anxiety about missing an event, a trend, or a hangout. JOMO or “joy of missing out” however is for our introverted friends, who enjoy solitude and the peace it comes with. We’re for these slangs, simply because everybody gets their fare share of FOMO and JOMO.

“Cancelledt” is usually used after someone is called out for something unpleasant they’ve done or said. While we support all victims who voice out injustices, there are measurable etiquettes to observe in internet call out culture. Do your own research, avoid surfing on the trending opinion, and evaluate before assuming what consequence the person deserves. Let’s stop the culture of shitting on people just because of some clumsy words. Therefore, we say trash the “cancelledt,” because this is too often carelessly dropped.

Deadass is a more aggressive way of saying something is real, while headass is an insult. They are ways of enforcing intensity. We say trash ‘em both because they’re not really necessary. If the former were to express something legit, why is it appropriate in this sentence? “I’m so broke, I would deadass kill someone for a dollar right now.” According to a Reddit user, deadass is something you use when confirming something you absolutely will or will not do. Meanwhile, headass supposedly means stupid, but it’s stupid a word itself. Check out Chrissy Teigen’s tweet.

please help us what is headass

GOAT is an acronym of “greatest of all time,” which is usually used by fans to describe their idols. First, why describe someone as a hardy domesticated ruminant animal that has backward curving horns? Second, it’s just too hard a claim.

KMS stands for “kill myself” while KYS means “kill yourself.” The former is often used after a long tiring day, an episode, or out of embarrassment. Because people drop this word too much, it’s hard to determine which one they’re coming from. We day drop this, because killing oneself shouldn’t be trivialized. The latter is used once people get too burnt out after a long online banter. We say trash it because it also shouldn’t be used as it legitimately can be harmful.

When you “@” someone, then you’re basically just calling their attention. This started from the mention feature on Twitter. It also has another variation of “don’t @ me” which mean you don’t want to be people to go directly to you. Especially when what you’re saying isn’t part of the status quo. We say this is good because it means you’re keeping your integrity behind your words and opinions. However, there’s a fine line between integrity and self-righteousness. We say trash this, and educate instead of “fite.”

Esketit is a slang for “let’s get it,” which originated from rapper Lil Pump. We say trash this simply because we’re pretty sure you have over 2 brain cells. According this video, there are three types of saying ESKETIT. According to us, none of them sound pleasant.

Art by Julia Cruz
You know what’s cool? Newsletters. Get exclusive updates on everything SCOUT through our newsletter. Sign up here.

SHAREFresh from bagging two wins at the American Music Awards—one for Best New...