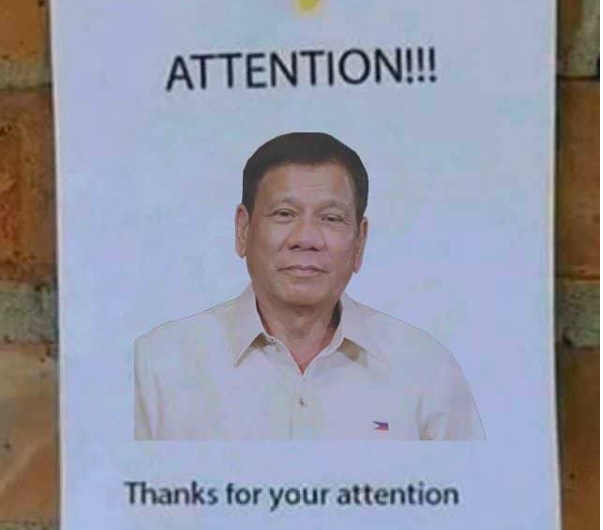 It was a tense day for a lot of people: the president announced that he will be “addressing the nation” in a press conference on Tuesday, three in the afternoon. Suspiciously, not a single reason was given, sparking rumors that he’ll (finally) step down from his post or that he’ll put the country under martial law. It’s the late dictator’s 101st birthday, after all (and 10 days before the anniversary of the martial law declaration).

In 2018’s biggest plot twist so far, the Palace canceled the presser just an hour before its schedule. Instead, the president went down with an hour-long talk show with his chief legal counsel.

The tête-à-tête was… underwhelming, to say the least. He should’ve just canceled it (and himself) completely. It was  literally just his usual rants against communists, Senator Antonio Trillanes, the yellows, the drugs—you name it, he got it. Pretty loaded for something without substance, but hey, here are five things we found out from his talk show:

which is true to an extent. Don’t know why he’s making it like some breaking news story when it’s no secret (and perfectly reasonable) that people would want him out. People are literally chanting “Duterte patalsikin, pasismo biguin!” in the streets during protests, and he’d probably hear it again in the coming protests for the 46th anniversary of the declaration of martial law. If anything, his accusations sound eerily familiar.

Duterte wants to declassify evidence of conspiracy between communists, Magdalo and his other political opponents, accusing them of planning to oust him from power and destabilize the government. Sounds familiar? ???

Also, you can’t destabilize a government that’s already unstable in the first place.

He says he will destroy whoever wants to destroy this country.

This meme is enough to explain our thoughts.

Duterte: If you destroy my country, I will destroy you. I will just return the favor. pic.twitter.com/ACXEeAG7F1

Duterte: You differentiate a dictator from the desire to protect your children.
Also Duterte a few minutes later: Nagpapatay ako, marami.

You shouldn’t care about inflation, because he really doesn’t.

Yup, you’re hungry, overworked, underpaid, and the prices of good are soaring due to inflation—but don’t worry, says the president: “Everybody in this planet Earth is suffering, we all have our problems.”

#PresidentDuterte is not denying the effects of the high inflation rate because “everybody in this planet Earth is suffering, we all have our problems.” He says his economic managers are working on it. Ok, sure.

Everything’s the fault of Trillanes, the drugs, the communists—all except him.

Asked about his supposed illness, the president steered his answer to accusing his critics of conniving to oust him (see item number one). When asked about Scarborough Shoal, he blamed Trillanes and the previous administration for losing them to China. Sure, Jan.

#PresidentDuterte is blaming Sen. Antonio Trillanes and the Aquino admin for losing Scarborough Shoal to China. Can someone get him his jet ski like right now.

And yes, the war of drugs will continue (unfortunately).

It’s not a Duterte speech if he won’t tell that the war on drugs will continue. Anyway, we been knew sis. pic.twitter.com/FNZefLzNa9