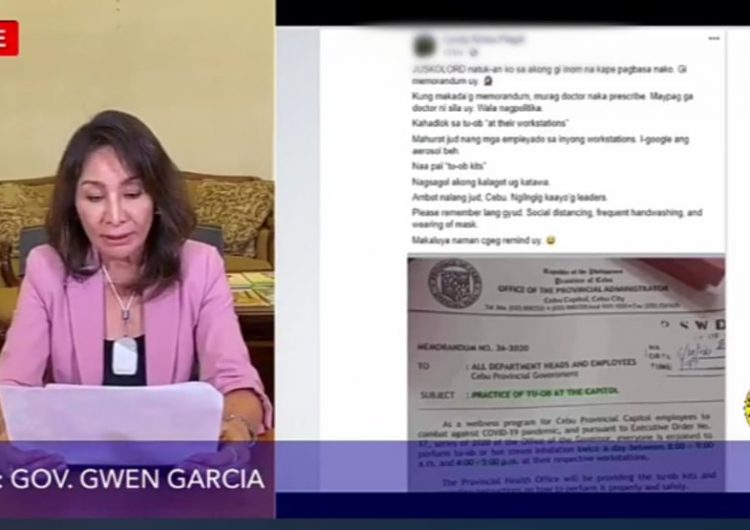 For Cebuanos and other folks of the country, “tuob” is a regular remedy to anyone with a bad cold. Slip in a steaming pot infused with lemon, ginger or eucalyptus hunched under a blanket, and they might find their illness magically dispelled. And, recently, Cebu Governor Gwendolyn Garcia, has even endorsed tuob (as well as other immune-boosting regimens) as a possible option to help asymptomatic patients and those with mild COVID-19 symptoms.

In a memorandum, the provincial government encouraged employees and department heads to perform tuob twice a day at their work stations. Hydrotherapy advocate Dr. Dale Pasco said that steam inhalation “would promote the multiplication of white blood cells, which would result in alleviating a patient’s condition.”

But other medical professionals questioned the method. A docktor expressed her frustration online, saying that this could be dangerous due to possible aerosolization of the virus. During a Facebook Live presser, Garcia revealed that the doctor was a two-year general practitioner in Mandaue City, then questioned their “meddling” in government business.

(“So what? You’ll decide what our policies here in the Capitol? From what I know, you’re a doctor. So why are you meddling with the administration? You’re just a general practitioner. We noticed you have two years of experience, but you already feel so confident in berating us and insulting those who practice steam inhalation.”)

But Twitter was quick to respond, eventually trending the hashtag “#NoToDoctorShaming.”

“I feel deeply hurt from all the criticisms doctors are getting for rectifying misconceptions about steam inhalation or ‘tuob,’” tweets one user. “Please don’t invalidate all our hard work just because you think we only have a ‘two-year’ experience presently. We are not your enemy.”

Other users detailed the years of education one has to endure to become a doctor. 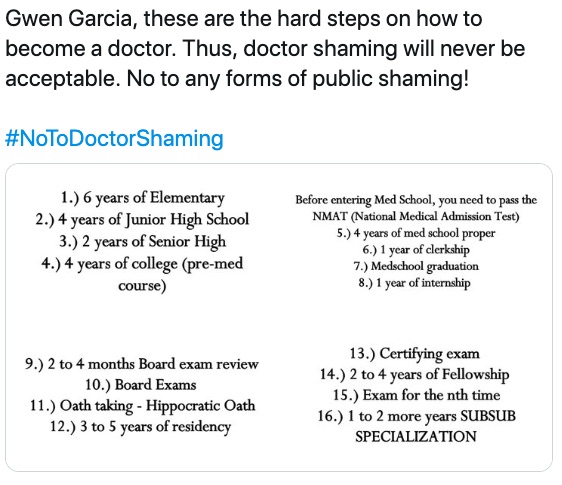 On another note, Garcia also called out another doctor who allegedly posted threats against her due to the memorandum.

(“Maybe she wants to be slapped. I am already tired of risking my life while attending to these positive patients and then there are things like this. Perhaps you want me to set you on fire so you would be cremated.)

Garcia dubbed the post “unethical,” even challenging the doctor to come forward and slap her.

Cebu’s Capitol issued a statement regarding the supposed threats. “They [the doctors] have not only mocked steam inhalation and those who practice it, they also wished ill of Capitol employees, and even threatened to slap the governor. With that, they went beyond their Hippocratic Oath to care and protect.”

OFFICIAL STATEMENT: The Capitol has issued an official statement on the issue on Governor Gwendolyn Garcia's calling out of two doctors, which resulted to trending tweet topics "Gwen Garcia" and #NoToDoctorShaming. pic.twitter.com/6usPeZS9eJ

The statement also clarified that Gov. Garcia did not claim tuob as a COVID-19 cure but only as one of the many preventive measures listed in Executive Order No. 17. In addition, it also indicated that alternative and traditional medicine is not illegal, noting Pres. Ramos’s Traditional and Alternative Medicine Act of 1997.

This however wasn’t the first time that the governor drew flak for disclosing personal information without their consent. In May, Gov. Garcia held a press conference where she presented printed comments of Facebook posts that criticized her and the provincial government’s COVID-19 response. The copies revealed the users’ background information, including their marital and relationship history. The Commission on Human Rights had later reprimanded Garcia.