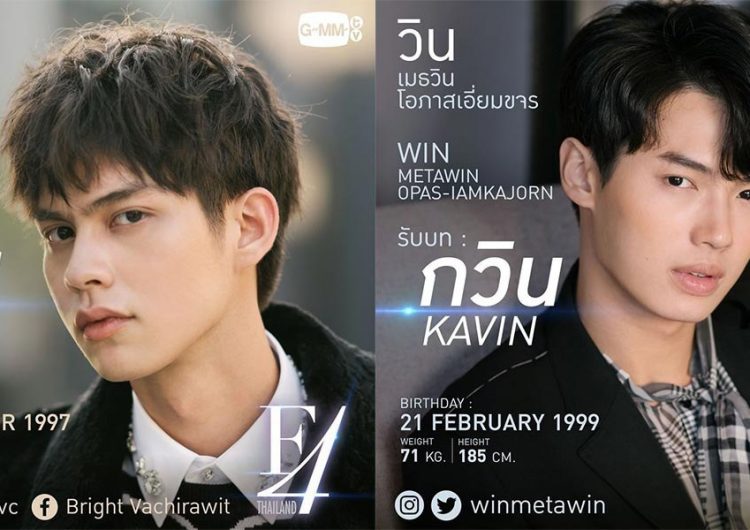 As someone who religiously memorized the confrontation scenes from the OG “Meteor Garden” in 2002, cried over Geum Jan-di’s pool accident in “Boys over Flowers” and stayed for the plot twists of the Chinese “Meteor Garden” reboot in 2018, know that this day is a lot for me. And I guess it’s the same for you.

Today, Sept. 16, Thai production company GMMTV revealed that we might be back on the “MG” train. As the title suggests, a new show called “F4 Thailand” is bringing the classic tale of the four bad boys and one strong girl meeting together in school—for both better or worse. Hold on a sec, I’m starting to hear all OSTs at once.

The news itself is surprising enough. But our peace just got bulldozed knowing that Bright Vachirawit (Thyme) and Win Metawin (Kavin) are part of the F4 gang along with Dew Jirawat Sutivanisak (Ren), Nani Hirunkit Changkham (MJ) and Tu Tontawan Tantivejakul as the iconic Shan Cai, but now renamed Gorya.

To be honest, I initially thought this was a fanfic. Now that I still haven’t moved on from the second season of “2gether The Series,” seeing Bright and Win as completely different people is a reset I wasn’t ready for. Will they be brothers? Rivals? (Betting on this since their photos are placed beside each other) Or two leads who’ll eventually realize their love for each other following this version’s slight plot tweaking? We’ll have to wait, but we’ll have to root for Bright and Win’s individual successes, NGL.

And TBH, even if we’re not the biggest fans of reboots, we’ll take a chance on this. After all, the trailer is exuding a different energy (and we honestly need more things to make us happy). And thanks to that trailer, I stopped thinking that this was just a fanfic.

No release date has been officially announced, but we found a 2021 clue in MyDramaList so there’s that.