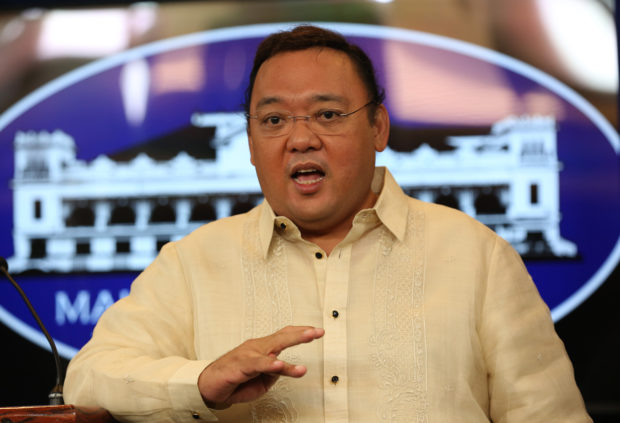 Another day in this year-long dumpster fire, another unanswered question in our rotten pile. Here’s one for today: If presidential spokesperson Harry Roque (or anyone, really) pulled this face in an online class, what could have been the possible consequences?

For context, this classic “belat” expression was witnessed by the internet in News5’s “Deretsahan.” The Luchi Cruz-Valdes-hosted show is grounded in its no-holds-barred ethos, catching interviewees off-guard with speedy, striking questions—which was completely evident in yesterday’s episode. Or was it?

After checking on Sec. Roque’s state of health—although he reported that he already tested negative today, Mar. 25—Cruz-Valdes immediately asked if the spox thought he broke quarantine protocols himself.

(I wasn’t irresponsible. I’m also not blaming the people.)

After several questions on being the subject of memes, defending President Duterte’s often misogynistic remarks and his sudden change in principles (from a lawyer who questions the system to a presidential spokesperson who “contextualizes” the president’s questionable statements), Cruz-Valdes asked whether he’s already lied, given his present position. “I have not lied,” Roque said, as he always obeys the presidential mandate.

Eventually, Cruz-Valdes probed how united the Cabinet members are during their meetings. “Meron talagang napakagagaling,” Roque said sarcastically. He continued, “Of course there are Cabinet members who I absolutely abhor and will not have anything to do with,” to which the host asked, “who?”

(There are really those who are clever.)

“Ayaw,” Roque refused to name. “Ganito na lang, bleh,” he then made a face, laughed and explained that for the sake of authenticity, he doesn’t pretend to vibe with those certain members.

We can’t say we’re surprised at his silly gesture on national TV. After all, we’ve seen him—a.k.a. one of the highest officials in the country—craft a salty PowerPoint deck, point a finger at a journalist and advise us to dance COVID-19 away (not literally, right?), so this is just another expected chapter in his book.

But what if ordinary people did the same? You know, we’re just casually hypothesizing the aftermath, if ever an SHS student makes that face in an online class, or if a full-time employee talks to their boss the way Roque did to Pinky Webb. A warning? It’s probably the lightest consequence.

Professionalism is a tricky term, especially when societal standards contradict what you see on TV. Come to think of it, in a country where ordinary citizens—especially the poor—immediately suffer punishments while the rich are excused, this is just another clone of a scenario. It’s the double standards for me, sis.

SHAREChunky sneakers are cool. That’s a fact. When the trend emerged in early...

Netflix is finally making a film about Philippine mythology