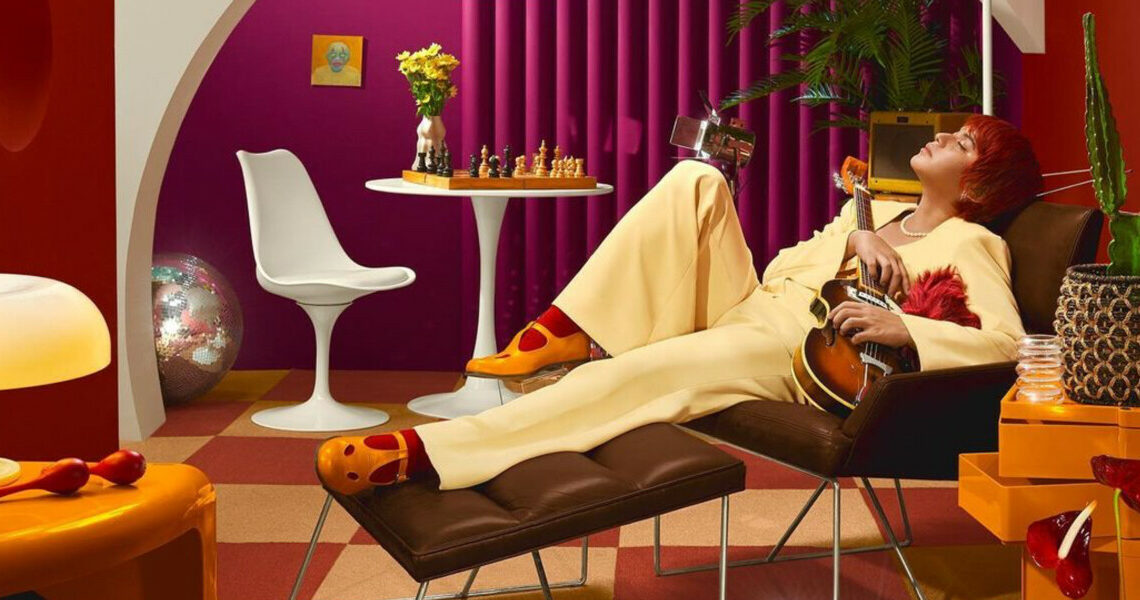 In case you haven’t noticed, the retro aesthetic has us in the palm of its hands. Flashy Y2K styles have re-entered the fashion scene while modern vintage interior design is increasingly becoming popular again. Even film and TV productions are obsessed with deliberate old-fashioned treatments, giving us masterpieces like “Last Night in Soho,” “La La Land,” and “The Lighthouse” among others.

Every creative industry has embraced this decade’s trend—and music is no exception. Many musicians are now trying their hand at bringing back old-school music by incorporating ’80s and ’90s soundscapes and themes into their songs and music videos.

But if I were to name a rising artist who does exceptionally well in producing nostalgia-inducing tracks, I’d have to say Blaster. The 23-year-old singer-songwriter has recently released his debut album “My Kosmik Island Disk,” which straddles a variety of genres that could easily fit disco dance floors, new age music festivals, and—wait for it—cosmic islands.

Aside from the retro elements integrated into each track, Blaster revealed in an exclusive interview with NME that he was also inspired by mecha anime and sci-fi movies.

Introductory track “Armonya” (a.k.a harmony) does a splendid job in setting up the general mood of the album. It starts off as a calm, tropical-ish instrumental before steadily progressing into a heavier sound, infused with pop-rock elements and impressive guitar riffs. I can imagine myself playing it while on the road to some isolated beach, looking for peace of mind.

It smoothly transitions into “O Kay Ganda,” which is originally released ahead of the album. It celebrates the singer-songwriter’s newfound creative freedom and excitement of doing whatever he wants. Space rock elements are particularly apparent in this, giving it that dreamy yet gritty vibe.

The third song off the album “Disko Forever” is an experimental track that merges city pop and Japanese rock music. It’s something you’d see people in the ’90s would groove to while clubbing at a go-to underground spot. And if I were to visualize the song, it’s a washed-out photo of girls dancing in flowy skirts, boys with pompadour haircuts, and DJs spinning records on a platter. (BTW, the song also has a Japanese version if you’re interested.)

“Huwag Mabahala” follows after, which has pulsing basslines and squiggly synth leads meandering through indie rock-influenced melodies. It stays in a similar mood as the previous track but calmer and easier on the ear.

Meanwhile, the fifth track (and pre-release single) “Narararamdaman” is dedicated to people who have developed a fear of missing out and growing old. Production-wise, it’s an easy-to-listen contemporary track with heavy hints of the classic Manila sound.

“Kosmik Dream” plays next, a city pop track riddled with prominent synthwave elements. It’s a cute song as it is, but what makes it extra special is the unexpected Japanese monologue halfway through. It perfectly melds into the song and will make you wonder if it’s a soundbite from an anime. (Or is it just me?)

Serving as an interlude to the following track, “Prelude in Eb Major” features dreamy space rock melodies accompanied by a reverberating synth lead that sounds like a guitar glitch effect.

Penultimate song “Magunaw Man ang Mundo” is my personal fave due to its intricate concept. This epitomizes Blaster’s musical capabilities as he succeeds in communicating emotions not only through the song’s lyrics, but also through its strident instrumental break.

(They say we regret only at the end. But why is that? Why did we start at the end? I hope you won’t dictate my fate. Who are you? Stay silent for now.)

“My Kosmik Island Disk” exemplifies the 23-year-old musician’s eclectic unique sound that makes him stand out from the rest. Not to mention his knack for writing emotionally raw and vulnerable lyrics that lets you peek at his journey to self-discovery.

Overall, it’s a no-skip album. Although it was inspired by Blaster’s personal experiences, making it a bit self-indulgent, the tracks can still resonate with many people, especially the younger generations going through the same thing he went through.

Blaster searches for disco’s remains in the ‘Disko Forever’ MV

SHARERemember your college philosophy class where you discussed the “chair-ness” of a chair,...

SHAREWhile we’re still reeling from the news of 88rising’s Filipino collective and taking...

SHAREAfter the whole IV of Spades commotion, we’re delighted to see that the...