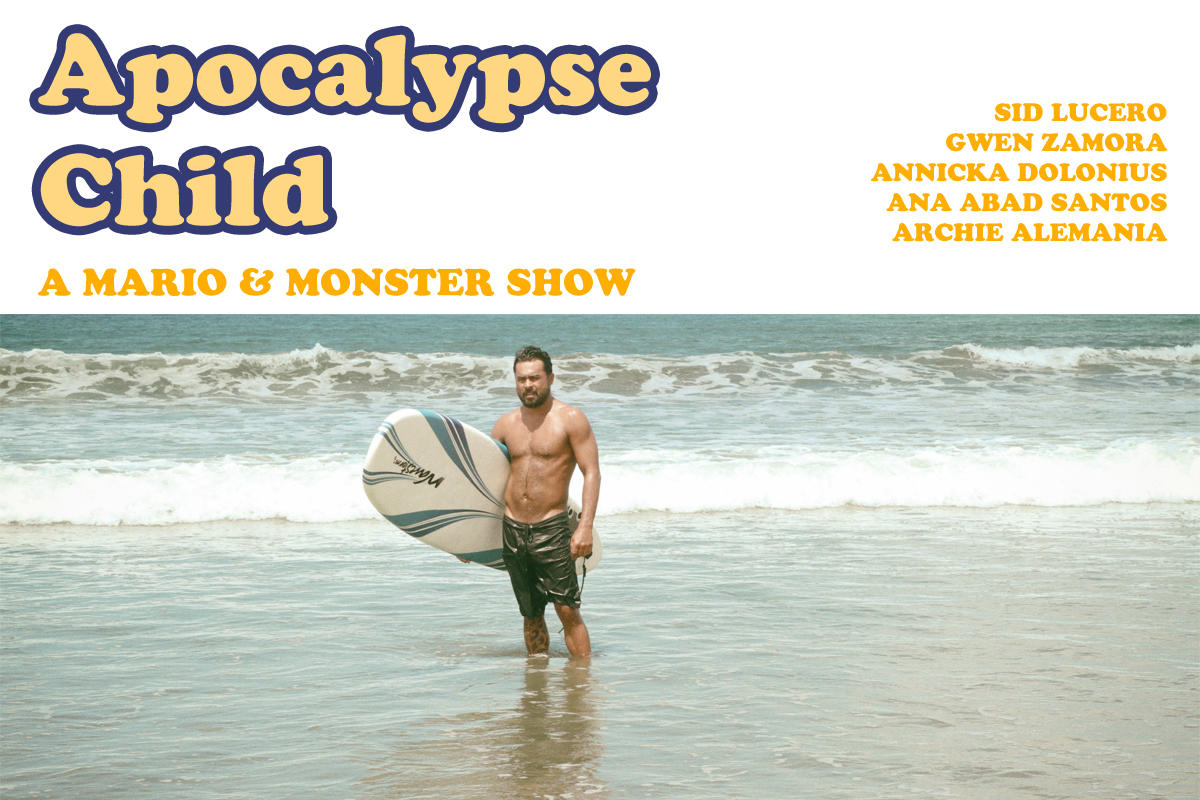 Two weeks back, I wrote about Apocalypse Child‘s commercial release. I wrote about how I was looking forward to the film, how I was eager to find how they pull the myth of a surfboard left behind by the Apocalypse Now set in Baler creating the very first surfing community in the Philippines. It also included a very sparse interview with Monster Jimenez, of whom I wanted to ask more questions, but stopped myself until I watched the film.

On the 18th, I went to a special screening and finally met Monster herself, who served me a glass of wine before the screening. I went to the screening alone and after the film finished, attended the very short Q&A afterwards, then said my goodbyes and walked out alone. I walked for a long while, unpacking the film in my head.

I was supposed to write a review about the film, but I supposed I can’t. Or I shouldn’t. In my online correspondence with Monster she did mention that reviews of the film are plenty; after all, the film has already toured the world, and after the warm reception locally and internationally did the thought of coming home for a nationwide release came to be. Which makes Apocalypse Child‘s premier so important. “We know it will take real grassroots effort for our release to attain a certain measure of success,” says Mario in an interview with Inquirer.net. “But we need to try, anyway.”

Local cinemas can be so ruthless—stories after stories from those who form the circles of the local independent film scene cry afoul or lament local indie flicks being taken down mere days after their commercial release, replaced by the usual suspects of bigger budgeted local romantic-comedies and Hollywood blockbusters.

I walked out of the special screening with more questions than answers. No, this is not an attempt at profundity towards the film; it’s not an experimental avant-garde art house masterpiece. There are a lot of local films that deserve a good commercial run. But it’s not about that. During the Q&A at the special screening, director and producer Mario Cornejo mentioned that the film is a very personal film for the entire team. Lots of revisions here and there, lots of plot points scrapped in favor of what the actors and the director felt. Mario added that making their previous films as the Mario & Monster Show was “like Call Of Duty, going from point A to point B,” but making Apocalypse Child was “like the Sims.” They built a world, and the actors sculpted it.

Apocalypse Child opens Wed. Can you watch early? Like the first day? I know you want to watch Dr. Strange. But that’ll be on for weeks.
?

So back to my dilemma of writing a review. I don’t want to tell you good the dialogue is, how stunning the visuals are, and how I can relate in some way to the characters. All I’m left with after the film are yearnings: a yearning to escape and find refuge in the unfamiliar, a yearning to engage in deeper conversation with familiar faces, and a yearning to immerse myself deeper in the myths that surround my daily life.

Again, I’m not trying to be pa-deep or anything. It’s just that as a millennial in the workforce, Apocalypse Child hits a certain nerve inside me that makes me want to appreciate what’s going in my life, to look at where I am right now with fresh eyes. The film didn’t have to make total sense for me to feel that way, and perhaps that’s the beauty of indie cinema.

But that’s just me. You’ll have to find out what it means to you. So please watch this pretty little film first, and find the reason why after. You might be surprised.

Here are the screenings:

SHAREYou know how when you’re on an out-of-town trip the car is always...

If you’ve been hooking up to your aux in your car stereo all...