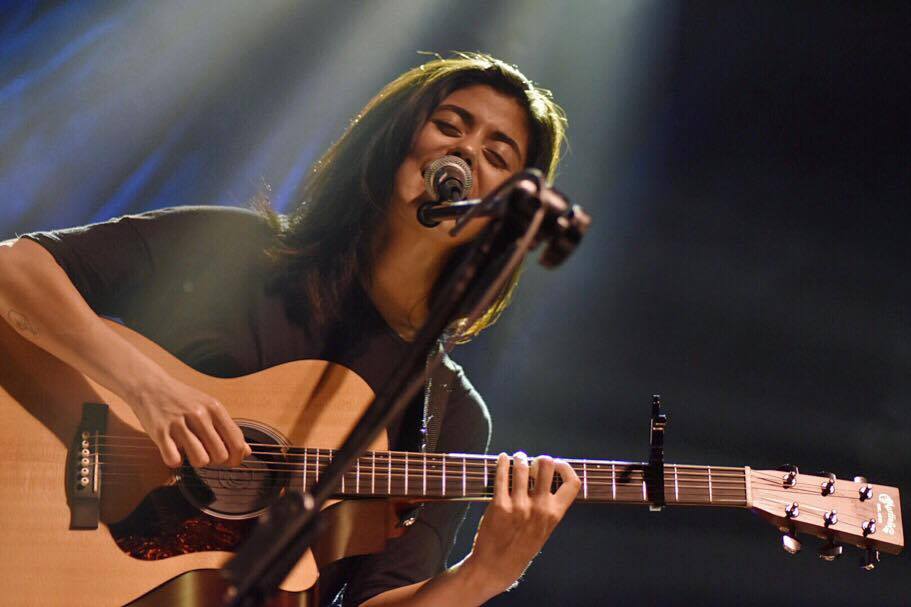 By Anton Chua. Photos by RJ Dimla for Stages Sessions

My first encounter with Daniela Andrade brought me fairly late to the party.

It was 2014, at the height of the popularity of Humans of New York on Facebook, when just about every other share on my news feed was a brand-new story captured by Brandon Stanton. One of the day’s posts highlighted a Filipino med student, Paulo Serapio, as he waxed nostalgic about his YouTube song vid days, talking about a “girl [he] used to collaborate with.” A cover they did together, for old times’ sake, was part of the post. Paulo’s almost-but-not-quite love story brought me to the video, but it was the girl herself who kept me there: Daniela, with her soulful, silky-smooth voice the most appropriate thing in the world for a song titled “Falling Slowly.” I’ve been a fan ever since.

So when Scout offered me the chance to see Daniela live as part of her Shore Tour, I didn’t hesitate. Walking into the iconic Music Museum venue, I was greeted by a remarkable stage backdrop made to look just like a beach, complete with logs, bamboo poles, white sand, and bottles of beer far too large for mere mortals to finish alone. It was a refreshing change of pace from the big-budget light shows at concerts to which I’d grown accustomed.

I’d come just a few minutes after the concert began, so I walked into the middle of a brilliant acoustic opening act by Gio Levy and Keiko Necesario. The duo played barefoot on the sand, invoking a relaxing, chill atmosphere that fit really well with the concert’s theme. After their set was a technically impressive hip-hop set by Skarm and Curtismith, whose booming bass and smooth raps hyped the audience, but felt a little tone-deaf given the chill atmosphere and the kind of music that Daniela typically played.

When it was finally time for Daniela herself to come onstage, it was clear just how much the audience was excited to see her. Her arrival was met with a chorus of screams and declarations of love that threatened to overwhelm the sound system. Even she appeared to be overwhelmed by the response.

[pull_quote]Yet here was Daniela, singing a song she called “Badly Programmed,” about an introvert’s horror story of walking home from a party, asking oneself if they said or did something wrong and awkward, telling her story through a somber piece to which virtually everyone in the audience could relate.[/pull_quote]

Her set was a sample platter of the old and the new—a couple of songs from Shore, including the eponymous “Shore” and “Digital Age,” and some out of Things We’ve Said. She also pulled out a sort of “Greatest Hits” selection of her famous YouTube covers, including “Feel Good Inc” by Gorillaz and “Crazy in Love” by Beyonce. Sorely missing was her amazing cover of “La Vie En Rose,” by far the most-viewed of her videos on her channel, but she did include Radiohead’s “Creep” in the list.

One of the most appealing things about Daniela Andrade is her authenticity, found in the atypical earnestness of her live performances that just works despite her soaring popularity. I attended both Pentatonix concerts when they toured here in 2015 and earlier this year, and while the a cappella group also had their roots in YouTube stardom, their performance was punctuated by a whole lot of big-budget light and sound that, though doubtless incredible, didn’t have quite the same feel as their earlier efforts. Yet here was Daniela, singing a song she called “Badly Programmed,” about an introvert’s horror story of walking home from a party, asking oneself if they said or did something wrong and awkward, telling her story through a somber piece to which virtually everyone in the audience could relate.

Several more songs, audience jokes (“Hi, I’m yours, what’s your name?” cue laughter) and even a prom proposal (“Yes! I never went to prom,” Daniela admitted) later, it was time for the show to end. But a couple of seconds’ worth of audience chanting was all it took to bring her back on stage for three more songs, ending with Pixies’ “Where is My Mind,” which Daniela said was one of her favorite covers by one of her favorite bands.

The success of Daniela Andrade represents what happens when a YouTube star (who could legitimately be anybody these days) stays true to her roots and maintains the image and atmosphere of their early days, sticking by the tastes of their earliest fans even while advancing forward to capture a wider audience’s hearts. Whether you jumped on the bandwagon as I had, or been an avid follower since her channel DanielaSings first started eight years ago with a grainy video of her covering Terra Naomi, she certainly had something for everyone.

SHAREIf our grandparents had whispers of folktales growing up, big city kids have...