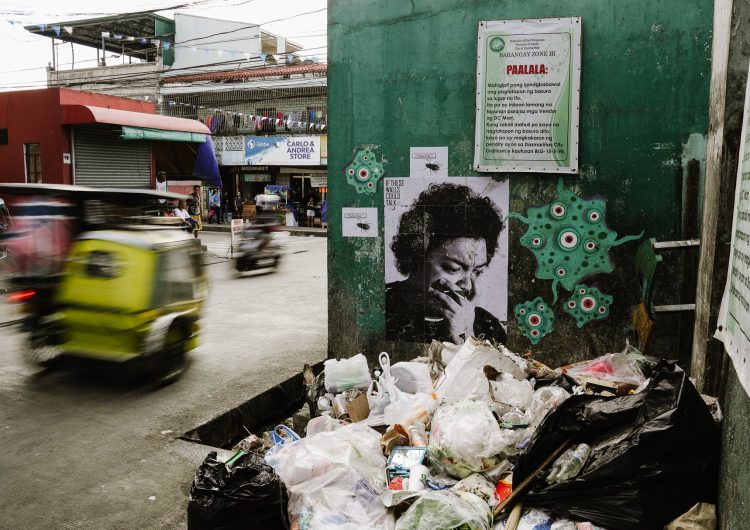 Signs are everywhere. Whether painted, written, or put together from a plethora of unlikely resources, its purpose stays the same: to wake the fuck out of us.

However, it looks like we’ve been sleeping on a lot of warning signs that only want the best for us. We see signs as bullets, and we dodge them like classic know-it-alls. It’s typical to see “Bawal Magtapon ng Basura Dito” beside a garbage mass of candy wrappers, cans, and shampoo sachets. Likewise, places plastered with “Bawal Umihi Dito” signs remain hella stenched. Words don’t seem enough for our waste management problem, and saying them outright doesn’t seem to work, does it?

Our apathy got so sickening that local artist Abes Abian had to do something. “Kung nakakapagsalita lang ang mga piling pader na ‘to, malamang diring-diri na rin sila,” he wrote alongside a Facebook album that has garnered more than 2,500 reactions as of writing. It contains one of the most accessible art forms—guerilla art.

If you live in Cavite or frequent its busy spots like Bacoor and General Trias lately, you might have been a witness to “If These Walls Could Talk,” Abes’ latest passion project under his second Portraiture x Wheatpaste series. As a wakeup call in the streets, he put up monochrome photos of people’s faces expressing disgust: nose covered, eyes repulsed, faces nauseated—all aimed at locations where locals litter. These irked icons are partnered with comic-like bacteria and weeping children, thanks to fellow artists Idea and Puka respectively.

This feat is rooted on national frustrations. He brings his craft into light following the issue of imported waste we get from Canada and South Korea, and also reconnects to how we ourselves treat the environment (“…mga pagbaha na dulot ng maling pamamahala at pagtapon ng basura”).

Last year, we got to talk to Abes Abian about the yawning portraits he made along Aguinaldo Highway in Cavite. In a short interview, he explained, “Yawning for me is like a reminder to ourselves that we should take it easy sometimes.”

Aside from being as striking as its title reference “These Walls“ by Kendrick Lamar, Abian’s “If These Walls Could Talk” works well as proof that art is meant to comfort the disturbed and disturb the comfortable. To hell with our passiveness.

The creative burnout is real in Rhxanders’ “Is It Real?” MV

Looking for something to ease your nerves this week? We got you covered....

There are unusual feelings that come from a four-day break, making you ponder...