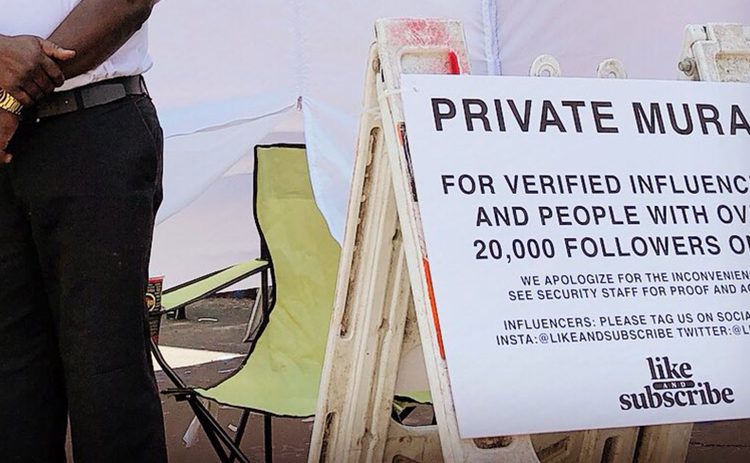 What are the signs of the end times? Let’s recall our favorite dystopian Y.A. novels and sci-fi series to recall. We have questionable government leaders, the FBI/NBI giving us Orwellian realness, and of course, likes and followers slowly replacing our currencies. The last one might be an exaggeration. But with this new exclusive mural installed in Los Angeles today, we’re asking ourselves if we woke up in Black Mirror somehow.

Recently, Like and Subscribe has curated a new mural in the heart of LA’s art scene. Pictures of this weirdly exclusive mural is currently making rounds on Twitter. What makes it so exclusive? It’s for verified influencers and people with over 20,000 followers only. Shield your eyes, digital plebians.

In this era of Instagram and Facebook, social media has truly changed the game in more ways than one. We’re still filled with questions though. What’s in the mural? Is it good? Is it even worth the privacy? Like anything that’s being marketed by social media influencers, it usually isn’t. This is one of the times that it still isn’t. We found the picture of the “private” mural on the curator’s Twitter thread.

There’s a new security-guarded mural in LA that only allows influencers and verifieds to take pics in front of it. pic.twitter.com/PDlLJ9C0DI

We really do hope that this is a social commentary ’cause it’ll be too sad if this is intentional. Although, if it is a commentary, it’s quite clever on provoking.

Social media is a balance of good and evil, frankly speaking. Art that involves cellphones turning us into zombies is played out. We get it. Although, there’s still a need for us to step away from our screens and think it over. The world does revolve around social media, likes and followers are affecting how others see us, and verified influencers are achieving celebrity status. The control it has over us now is frightening and it could get worse.

If anything, this art installation is giving us two things: anxiety about the future and something to make fun of. So you know, the usual.

While you’ve been jamming to your algorithm-curated playlists on Discover Weekly, Spotify took...