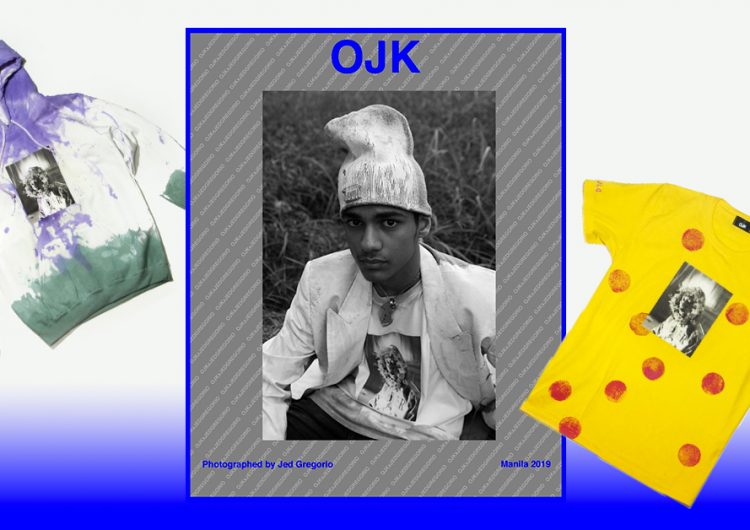 When I interviewed Johan Kyle Ong for the “Leaders of the New Cool” feature from our 32nd issue, he said this when asked about his thoughts on the creative community: “I believe that if you’re going to die and the work you leave on Earth looks like everything else, then what’s the point?” A bold statement coming from a bold designer. His collaboration with artist and former SCOUT editor in chief Jed Gregorio, with whom he has worked with several times in the recent past, doesn’t look like anything on Earth because simply put, it doesn’t come from the Earth. At least not the Earth I know.

The collection employs patterns and prints that aren’t entirely new, but in fashion hardly anything really is, which is why the #OJKxJedGregorio collection employs narrative as its foundation. There’s a lot of thought put into the campaign—the idea of a parallel world and a small God, accessories as “talismans,” the use of these accessories as just for the campaign shoot and not part of the actual collection—ideas that can probably be created only by individuals who are on the same frequency. Most of all, there is confidence; the vision is clear, crisp, and rich.

Based on what I’ve seen so far, the collection seems to revolve on a concept on “The Lover.” How was this idea conceived, and can you tell us more about it?
JED: “The Lover” originally is an artwork consisting of a large-scale photograph and a short story, “The Death of Four Cats (The Story of the Lover)”.Last month I was invited to participate in a group exhibition in District Gallery, and it was one of the works I decided to show. The photograph is a portrait where a character only known as the Lover is wearing one of Johan’s hoodies, which says “Lover” on it.

Last month I was invited to participate in a group exhibition in District Gallery, and it was one of the works I decided to show. The photograph is a portrait where a character only known as the Lover is wearing one of Johan’s hoodies, which says “Lover” on it.

JOHAN: When Jed showed it to me I found the photo so strange and striking. I thought it needed to become some kind of merch! It was so cool to see an OJK piece in an art gallery. So after Jed’s exhibit, we developed that idea. Also, the guy in the photo is Paolo [Crodua], who shot all of my campaigns. That made it all the more special for me, because the three of us have been collaborators since in the beginning, usually with Paolo as the photographer and Jed as stylist.
JED: So this is the first one Paolo didn’t shoot.
JOHAN: Although he’s still very present, but in a different way.
JED: Now he’s model and and muse, and he’s practically my teacher. I think even the way I shot the campaign is still very much his style.

The idea for the accessories was to make these idiosyncratic objects that would seem to have a talismanic function in the world of the Lover.

What pieces can we expect in the collection?
JOHAN: We designed shirts and hoodies. Specifically for the campaign shoot, we also made accessories like a scarf, necklaces, pins, and hats.
JED: The idea for the accessories was to make these idiosyncratic objects that would seem to have a talismanic function in the world of The Lover. Because when you read the story, you get a sense that the Lover’s world is both real and unreal; it’s where God is small and cats have an articulated consciousness.

The idea for the accessories was to make these idiosyncratic objects that would seem to have a talismanic function in the world of The Lover.

JOHAN: That’s why Ev and Chirag, who modeled in the campaign shoot, were dressed like they were from that parallel world where the Lover is like some kind of religious or pop icon, and he’s on T-shirts and hoodies.
JED: Yeah, so in that sense everyone who cops the merch gets to be somehow part of the artwork. I guess it’s also why I did the collab, because it’s not just a diffusion thing where we’ll put an art-image on clothes for its own sake. The whole idea for the collab is conceptually consistent with my motivations for creating “The Lover”. The OJK merch becomes almost like diegetic props or costume in that whole context.
JOHAN: For me it also makes sense for OJK as a fashion and streetwear brand. There’s always a punk vibe to Jed’s art, and I think you also see that in how he styles the OJK campaigns before. He gives zero fucks. Can I say that?
JED: And if you know Johan, the entire OJK is also built on that vibe. So there you go.

Johan and Jed, both of you have worked together in different capacities in the past. What was the conversation that began to have this collaboration take place in items? And what are your individual parts in the collaboration?
JED: We always talk so it’s hard to say where or how things begin.
JOHAN: We pretty much did everything together, from deciding on the color to style variations and embroidery, etc. We also did the experiments together, like with the dye and the paints. When we were making the first prototypes Jed was sick, he was infecting everything. So his DNA is all over all this, figuratively and literally. [laughs]
JED: Didn’t we first meet about the collab after Christmas? I was waiting for him and Johan arrives wearing this fur coat in 30-degree weather. And I was like, okay here we go, this shit’s about to go down.

The collection is already out. Is anything still for sale? Where and how can people purchase?
JOHAN: It’s limited edition but still up for grabs! Just DM me on Instagram (@johan__kyle). Also watch out for an expanded collection and some re-editions. We have a lot more in store.