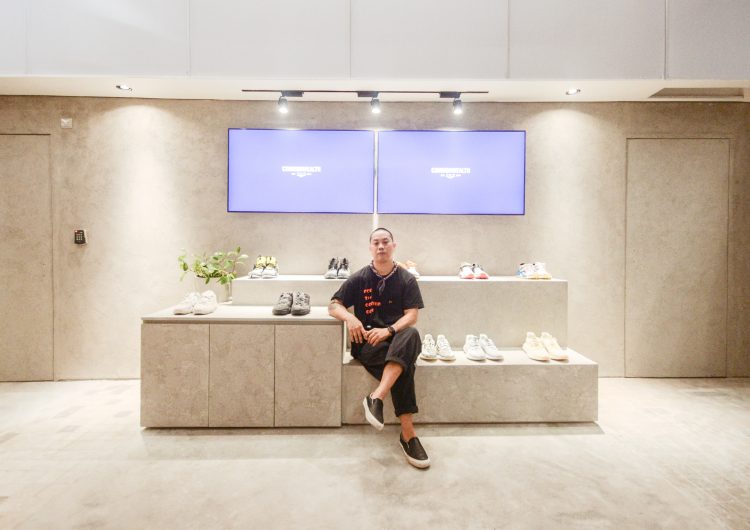 Commonwealth is having a good year. Today marks the launch of their third branch here in the Philippines and in the coveted Power Plant Mall nonetheless. It’s going to be their biggest store yet. Ever since opening up in SM Aura last 2015, Commonwealth’s influence has been recognized. Their stores are one of the few places that carry brands that your hip favorites also wear.

While droves and droves of their loyal customers flock to the store today to purchase exclusive releases and streetwear grails, yesterday the space was barely populated by people. Instead, various members of the Commonwealth team are making sure everything is okay for the release. There was a shoot for products being held on one end while employees frequently go between the front and the back of the store. People are busy.

Commonwealth co-founder Omar Quiambao paces around the store as well, albeit more leisurely. “I’m older now so I’m less brand identity-driven,” he motions while taking a look at the items in the store. The flagship Rockwell branch carries the likes of brands you could only get through a connection overseas or through dicey online purchases before: Cav Empt, Nanamica, Human Made, and Stone Island, among others. “I’m a bit biased, I feel like everything we bring in is pretty good and is worthy of a purchase.” Asked for recommendations, he eventually shares opinions on almost everything for sale in the store. 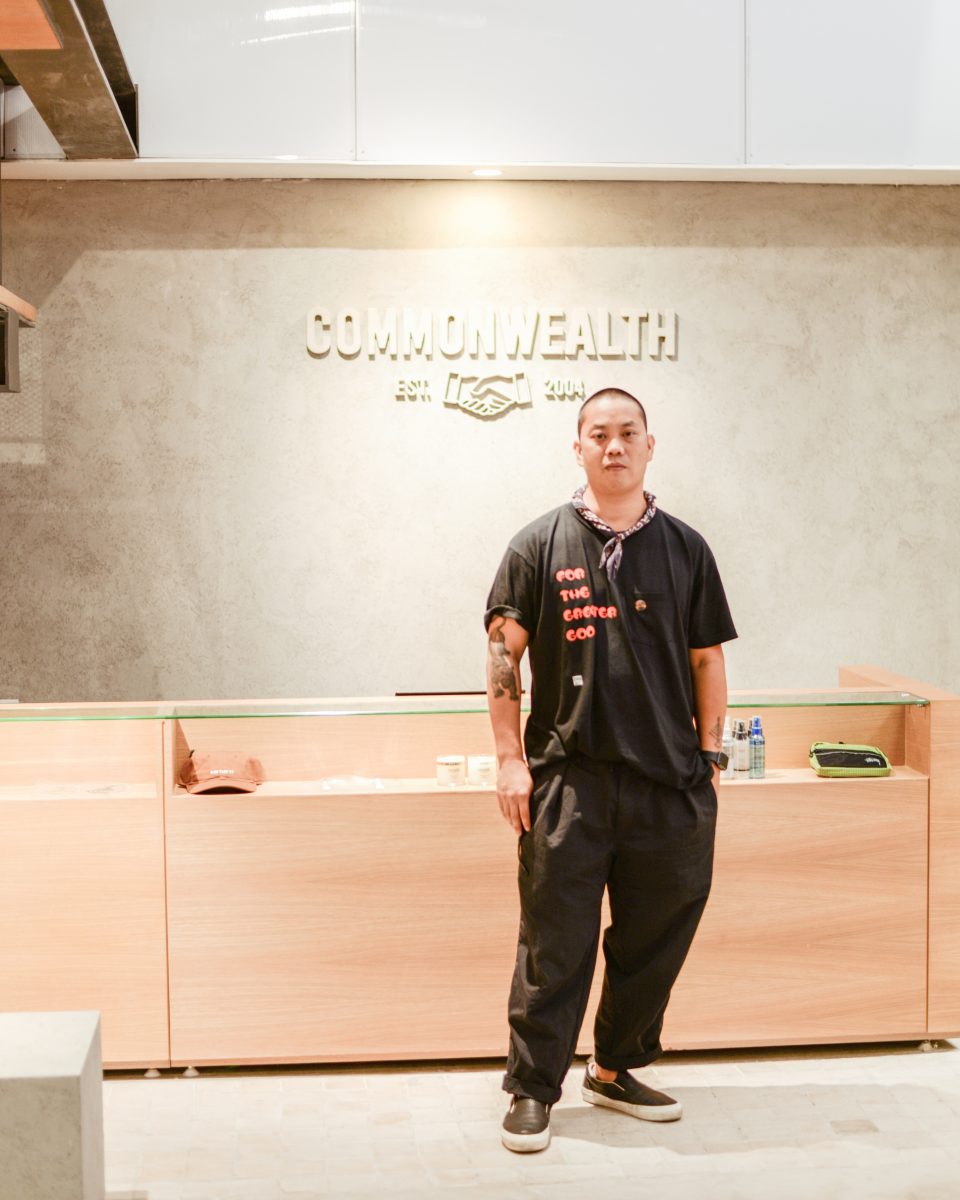 Omar, co-founder Michael Concepcion, and the rest of their collaborators take pride after all, in the careful curation of all the products in store. Being the only Tier 0 Nikelab and Adidas Consortium account (meaning they have access to the really good stuff), Commonwealth stands as the source for many coveted items in the streetwear market.

But more than the hype, Commonwealth’s influence has gathered a community under the lifestyle that these global brands espouse, while at the same time calling the attention of brands around the world to the Philippine market.

We get to have a short Q&A with Omar about the status of their journey so far as a brand, what people can expect in the near future, and if Commonwealth would be ready to carry local brands soon.

Congratulations on the third Commonwealth branch in Manila. Are you looking to expand in other key locations in the country? What informs your choice in where to pick a location?

We have a game plan for expansion. But it’s always step by step .There’s a lot of factors to it. Sometime it’s not in our hands. It has something to do with the brand partners we have. Whether or not there’s enough product to fulfill that demand. So yeah, we have plans. We just have to strategize and work on a lot of factors.

Can I ask what those factors are?

Sure, some of the factors are let’s say like, Adidas, right? The region might allocate a certain number of pairs for all of Southeast Asia. The Philippines is only factored in to get a hundred pairs. We only get a hundred pairs. And we can only fulfill the number of doors we have now. That will open another door, and the fact that we have stock for that door. The plan with Adidas, Mike’s plan, is to allocate more pairs with our partners. It’s probably one of the main factors. 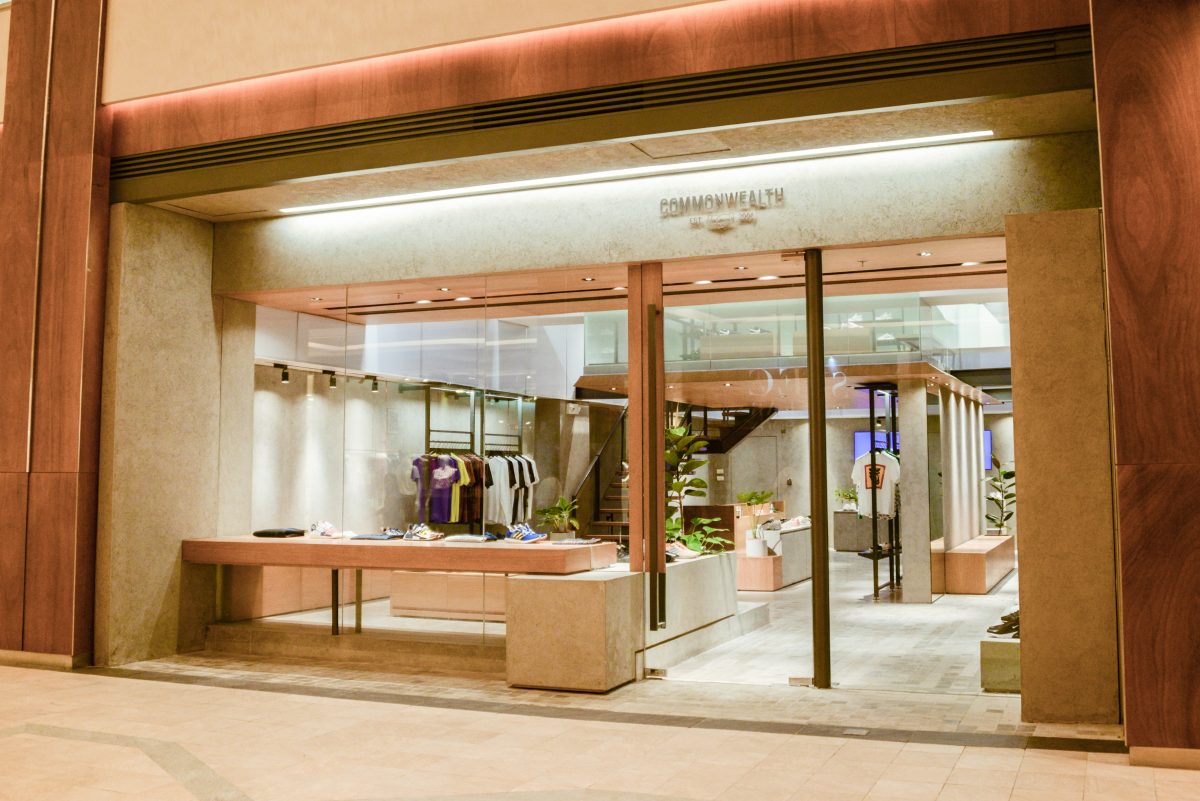 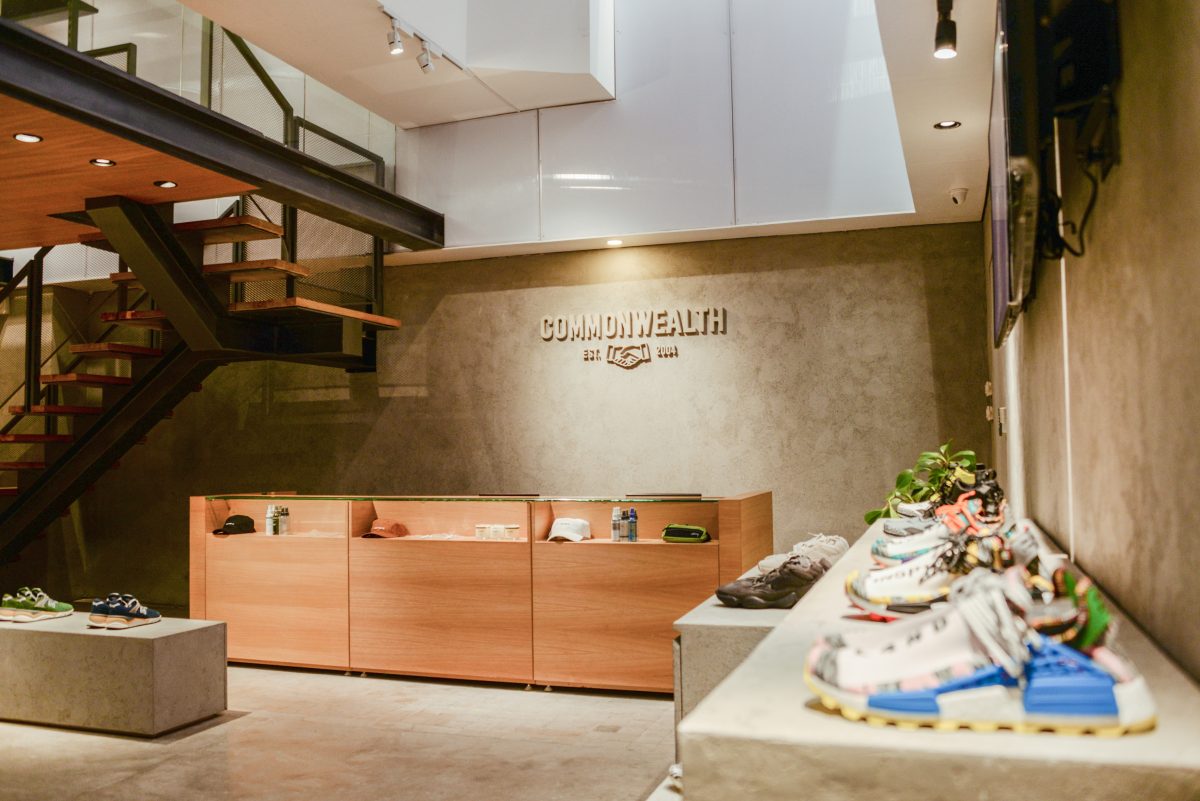 And just available real estate. Is the right space available for us? Like, let’s say here in Rockwell, while it’s been in our lists, we couldn’t open until now until the new wing opened up. We don’t really want to open up in a space that doesn’t fit us too well. We don’t want to force it until it’s just right for us.

This is the first Commonwealth branch with a mezzanine floor. What was the thought process behind the design of the Rockwell branch?

With each Commonwealth store we try to treat everything individually, where we have an overall theme awith the materials and a kind of a certain look and feel. So when it comes to what we want the store to be, each location is determined by the neighborhood they’ve opened up, the type of brands we’ll open in each location, and also how it’s going to progress and do something different than the store we’ve had before.

When you go to each location you’ll have a similar feeling but it’s unique to itself. With this one, we want to push it. It’s the only Commonwealth with a mezzanine floor here in the Philippines and the United States.

You mentioned some brands are handpicked for this branch. Can you mention some of these brands?

We’re excited to introduce a couple new brands here. We have Aries out of Europe as well as Nanamica from Japan. We’re also introducing Polythene Optics. It’s Samuel Ross’s diffusion line, which is different from A Cold Wall. It’s less-runway focused. It may not be as progressive as his mainline. We’re excited to showcase some of those new brands.

What can we expect in the opening of the Rockwell branch?

A lot of releases have been exclusive to Commonwealth. I don’t know the full lineup, but there are some exclusive footwear releasing tomorrow. Also the new lines we’ve been able to bring in here, like Human Made.

What would you say is the ideal customer at Commonwealth?

It’s funny because I don’t think we target a specific consumer. I think that what we do is we try to focus on telling a story and showcasing a brand. Whoever’s attracted to that is kind of a free-for-all. There’s no really like, Hey our customers are male, aged 16 to 35. 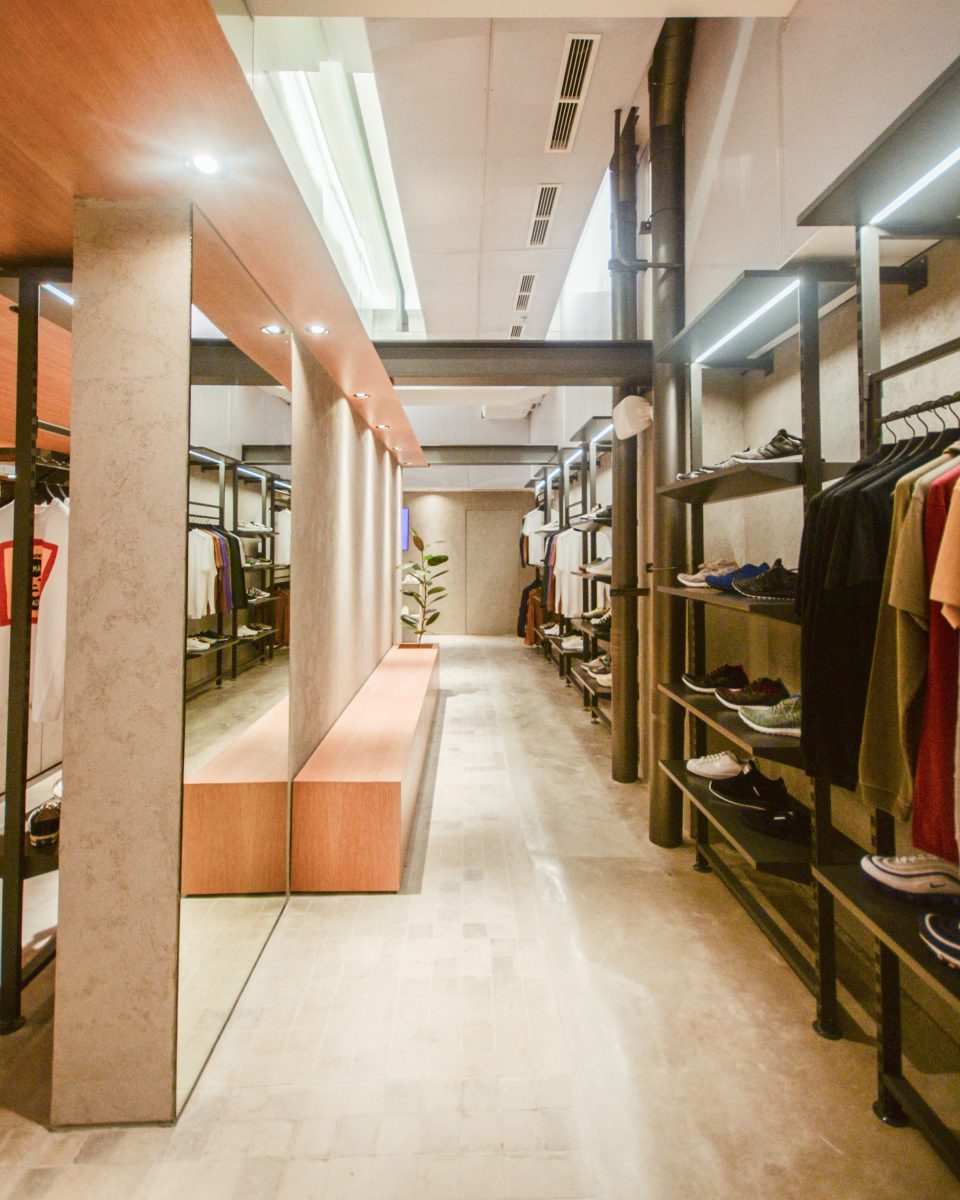 For us, it’s more of hey, this is the story and we hope people like the story. And whoever likes that is who our fanbase is. It’s nothing so strategic as in we want this guy, it’s never been about that. It’s about things we like and we hope they like those things too.

For us, it’s more of hey, this is the story and we hope people like the story. And whoever likes that is who our fanbase is.

But based on what you see, what’s the most usual target market?

It’s pretty widespread. We have a customer base that’s more focused on streetwear and is really into sneakers. There are people that like footwear but are more interested in apparel and the brands that we have. Those are two different mindsets, right? But one thing is that both customers are very discerning and very educated in what they’re looking for: the styles.

What does Commonwealth have lined up for the rest of the year?

We have a pretty big project with Adidas coming out in December. We’re excited to have that trickle out soon.

We have a pretty big project with Adidas coming out in December. We’re excited to have that trickle out soon. We’re releasing our inhouse line of goods. Tomorrow this branch here in Rockwell is the first to release the new line. And we’ll have new deliveries come November and December.

There’s a line of exclusive shirts available here. What was the thought process behind it?

Let’s talk about the world of retail and how Manila’s retail landscape is changing. What are the things you’re paying close attention to right now? What has changed?

With access to information, there’s a global audience that’s aware of in the rest of the world within our niche market. Specifically in Manila, it’s moving pretty fast. What was going on with Commonwealth and in the landscape of what is available three years ago is very different than today. That’s good. That means it’s being accepted and it’s growing. Most of the time we’re paying attention to what’s going on we also pay attention to what we want to do. 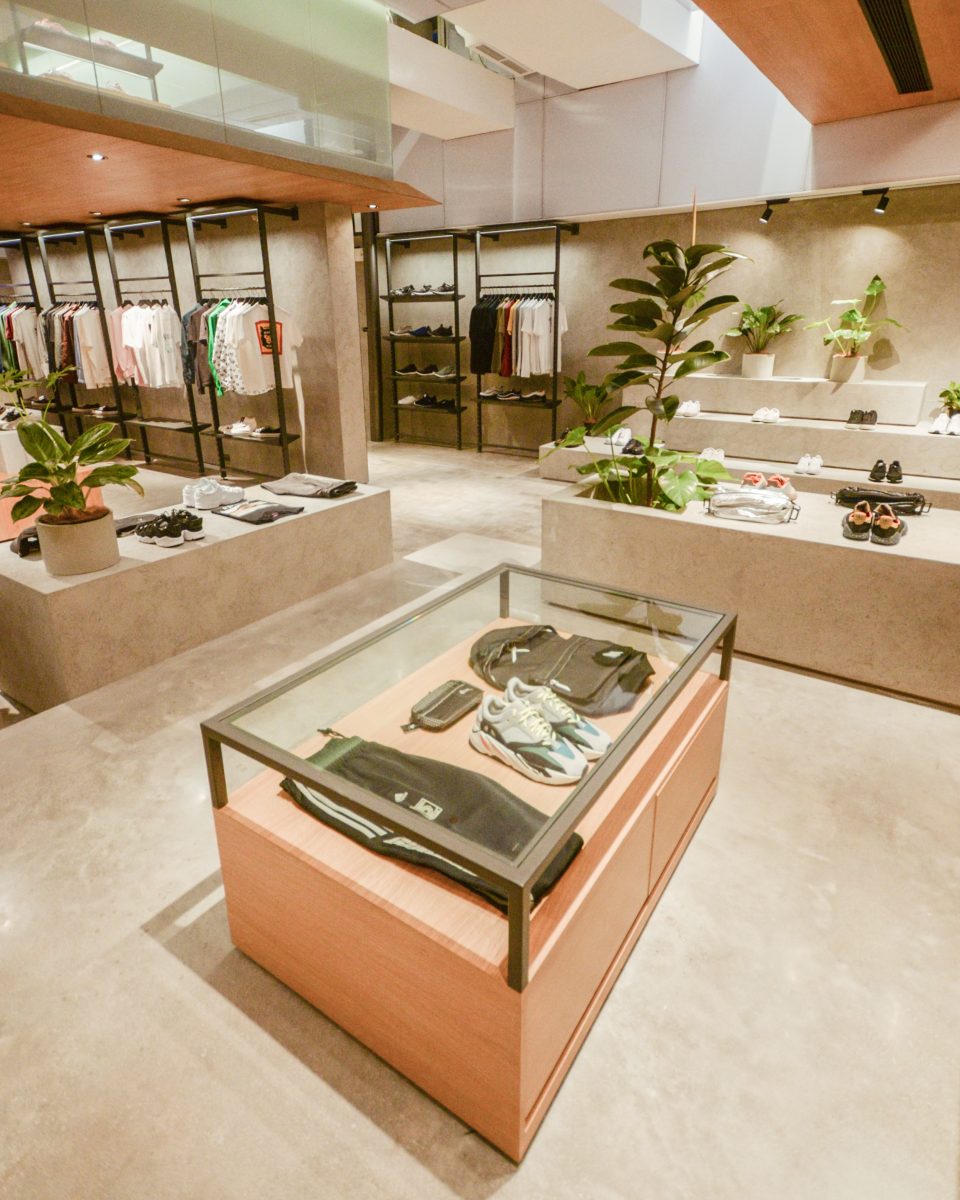 We are aware of other stores coming up and other brands entering the country. We think it’s great. I think it’s just really good for the community at large and for the city,  to have more diversity in opinions and market knowledge.

Do you see Commonwealth as a market leader or as a disruptor? Top dog or underdog?

You know, I think it’s all perspective. I think we’re an underdog in the perspective of against our own goals. Have we achieved what we want to achieve, where we want to be in a certain point of time? We don’t compare ourselves to what other people are doing. In that sense we always want to do more. Everybody wants to better themselves; us too.

We don’t compare ourselves to what other people are doing. In that sense we always want to do more. Everybody wants to better themselves; us too.

In that way we’re always trying to move forward and always trying to grow. While we’re proud of the things we do, I don’t think we’re like hey, we’re in the top of our game. There’s only so much more that we can do.

Have you guys ever thought about carrying local brands?

Absolutely. That’s one of our goals. A couple projects and talks are in the works. We’re trying to establish ourselves first so we can make way for partnerships with local brands. First off, even here in Manila we have a design team. Having that community involved is a first start to understanding what our directions with partnerships with brands will be.We definitely look forward to and we hope to reveal some of the talent that’s already here in the Philippines.

I think people here in the Philippines are ready.

There’s a lot of talent, definitely. I just think that they are sometimes from the outside looking in, and don’t have the experience of being part of the industry worldwide.

There are some factors that to be successful or to have stockists similar to ourselves, there are definitely certain procedural things that need to take place. Like how to contact a buyer, how to present your line, things in that manner

Right. There are some factors that to be successful or to have stockists similar to ourselves, there are definitely certain procedural things that need to take place. Like how to contact a buyer, how to present your line, things in that manner. For us we’re definitely hanging on and we have conversations or relationships with designers and the brands we carry so for us to develop that with brands here in the Philippines is important and forthcoming.

By Carlos Tabunda Gone are the days where memes are unearthed and traded...

Ari Aster is back after the critical success of his directorial debut effort,...