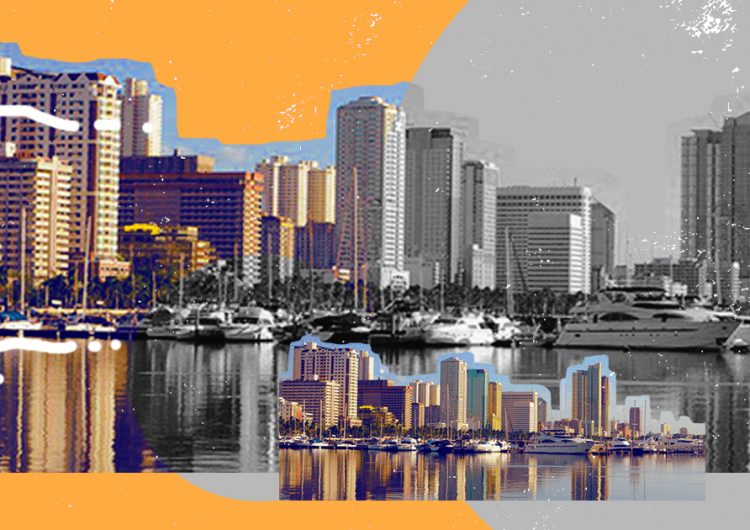 “Where are you from?” is as simple as it can get. However, when you’re not from a certain province but you’re not from Manila, the answer becomes a little bit complicated. There is a gray area that lies in the middle of these places–no, I don’t mean we live in NLEX, SLEX, or the hectares of grass cows graze. It’s just that the definition of “home” completely varies. Is it a feeling or a destination? Perhaps it means safe haven, or does it rely on one’s culture and history? The binaries are enough to put us at our wit’s ends, so we pick a compromised ‘either or’ to avoid the complexity of the discussion. Now we wonder: Where do we belong? Is it normal to feel homesick for both places? Here are some relatable things if you’re one of us who’s neither a strict Manileño or Probinsyano.

Living in a condo

After tossing that academic cap from high school, congratulations, you’re in another circle of hell–except this time, you’re independent. Your parents are very proud of you for bagging your dream school’s acceptance letter. Although this may mean spending more and seeing less of you, they send you to Manila because these schools “bring out the best in you.” Say goodbye to your own room with a queen bed, bookshelves, and a balcony. Say goodbye to a dining table and a sofa. Oh, say goodbye to windows too. This is your new home: a 20 square meter box, metal bunk beds, new pet cockroaches, and a small peep hole–with the view of skyscrapers, at least.

With school taking up most of your time, there is no leeway to cook your own meal, nor learn how to cook. Therefore, your diet is convenience store food: Uncle John’s fried chicken, about 10 cups of yakisoba, and a bulk of 3-in-1 coffee. On good days, you treat yourself to dinner with friends. Feeling like you deserve this for working so hard on that 5-page paper, this dinner becomes everyday until your allowance which was given by the start of the month is gone only after the first week. Now, you’re back to cup noodles! (Or home-cooked delivery, thank god)

People from Manila frustrate you

When you’re settled in Manila and the wonder that once filtered your eyes fades, people from Manila start to frustrate you. Manila itself starts to frustrate you (if you weren’t consumed by it). There are people relying on social status and exclusivity who will unreasonably refuse to talk to probinsyanos. There’s the immensely frustrating traffic, the suffocating pollution, and the power play in school or work. And there’s the worst kind, fuckboys. You start to miss the province’s fresh cool breeze that caresses your face in mornings, the singing of birds, the smell of grass after rain. You miss your family and your pets.

Grasping whether or not to travel

Here it is, you’re dying to get home. Except the amount of workload and events you have to go to are insane. Every week, there’s something that pops up–may it be a dinner with friends, a show with an incentive, or an event you wouldn’t want to miss. Going home is always a compromise, because, as the saying goes “the city never sleeps.”

People from the province frustrate you

When you finally make your trip back, you hear blunt remarks from your relatives that are considered offensive and taboo in the metro: “Ang taba taba mo na,” or “Ang itim mo.” With the “wokeness” of people in Manila, you find it hard to believe that those in your hometown still act unknowing of certain societal norms. Here, you find Duterte supporters, because your relatives still believe in the binary of gender and consider Duterte’s crude remarks as “jokes.” Here you will find a linear way of living: graduate, get a job, have a family, and die without leaving a legacy. Art is frowned upon because it “does not pay well.” Going against the norm is a sin. Questioning your own beliefs is an insult to their religion. You beg to go back to Manila because you feel like you don’t belong in your province, despite the 16 years you spent here.

Where do I leave my clothes?

You pack your bags, ready to brace the hours of bus rides and the big city once again. Being in the province meant wearing old clothes, because you couldn’t give two fucks. Going back to Manila, however, means handpicking all the nice items. “All the nice items” result to about 15 pieces of clothing. You’ll be having laundry days where provincial apparel meets Manila fashion, in a bad way.

Where do I belong?

When it all comes down to answering where you’re really from, the easy way out is to mention your hometown. When they ask where you reside, it’s in the metro. These questions are rather objective. The trickier question would be “Where do you belong?” Although it’s highly improbable someone asks you such, it’s something worth reflecting on. What is the idea of belongingness anyway? If this means sharing culture, subcultures, interests, and opinions, then the answer is easy. If this however means the foundation of your personality which picked to be part of the things mentioned, then it’s worth thinking twice.

At the end of the day, a place remains a place. The people inside them, however, traverse different paths and grounds. The diversity of opinions and traditions condition the mind to question, and encourage it to form new ideas. Maybe the point of leaving one space for another grants the discomfort that allots growth. At the end of the day, hiding in your safe space prevents you from seeing the rest of the world.

By Cedric S. Reyes Mondays typically have a clear trajectory. I wake a...

Whichever love language you use, “Isa Pa, With Feelings” is a film to...

In the middle of disheartening events (and doing the extra tough art of...