In October of this year, Gabbi interrupted her Instagram followers’ regular content viewing by releasing a set of Riverdale-inspired teasers—complete with the whole vintage-themed diner and neon lights shebang—with an objective that was clear and simple: to let everyone know she’s finally dropping her first single.

It’s no secret the girl can sing, what with the number of song covers she’s posted online and all the performances she’s done for her TV guestings and event appearances, so for anyone who’s been keeping an eye on Gabbi, it was only a matter of time before she finally took this sensible step in her career.

Even with her few years of experience, this girl already has her sights set on something  bigger. 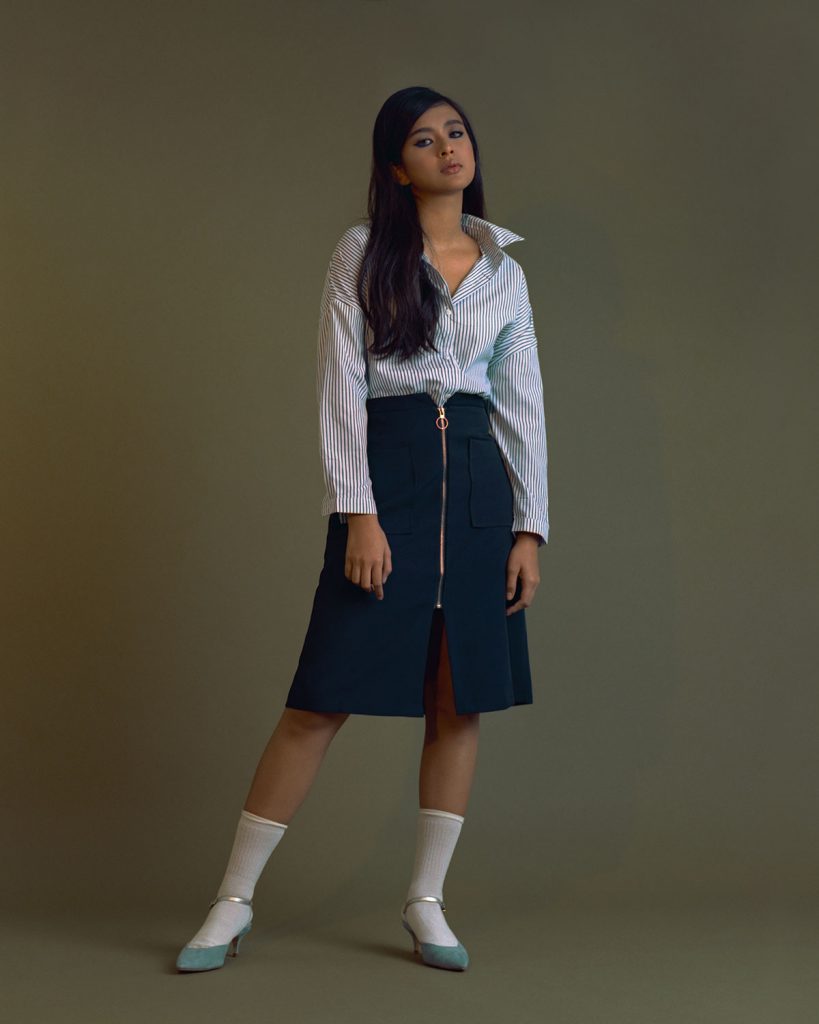 Exhausted from a long day at work—she had just come from taping and had to brave the rainy payday Friday traffic to make it all the way to Makati—but the teen star, comfortably dressed in a loose, turquoise-hued T-shirt and leggings, her hair bunched up in a ponytail, walked in with a shy smile and a sincere apology that did a commendable job at hiding her weariness. “I’m so sorry, guys! I got stuck in traffic! Nakakahiya, sorry,” she exclaimed, making a beeline for the hair and makeup area to waste no more time.

It appears no amount of professionally layered makeup can conceal the real Gabbi Garcia. Propped up comfortably in a chair, she begins to pore over her past and describes how much her childhood dreams have changed, and how much they haven’t, since then. “I really wanted to become a pilot, originally, and then showbiz was just really on the side kasi I loved performing. Ever since I was a kid, I loved singing, dancing… I was really a bibo kid. Like, whenever we’d have Christmas parties in school, I would host [or] I would sing, so it [was] not really that impossible that I could enter showbiz,” she says. 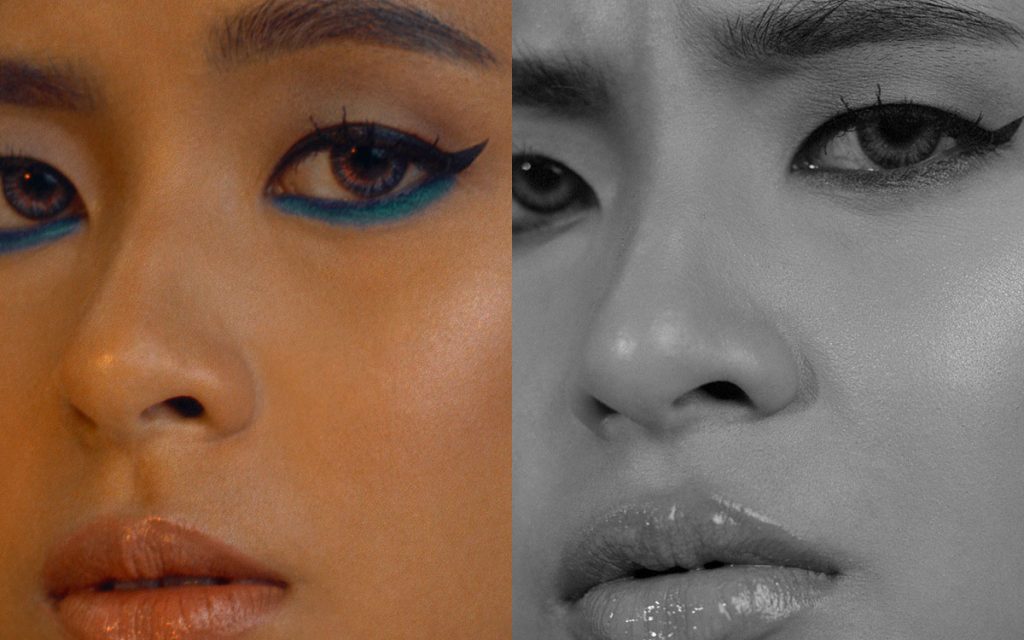 While most people are busy trying to differentiate themselves from everyone else, Gabbi Garcia finds beauty in being—in her own little ways—just like the rest of them. In spite of her blossoming showbiz career, the 18-year-old actress enjoys spending her rare days off being a normal teenager, however out of reach the concept of normality may seem for her. “In my line of work kasi, we barely have time to be normal people. I make sure that I balance everything, that I still get to be Gabbi,” she says.

As it turns out, the TV star has always been immersed in music, only setting it aside to help her establish her footing in the complicated landscape of showbiz. “When I entered showbiz, the first thing that popped into my head was [that] I wanted to enter the music world, but then things didn’t really go as planned. So sabi ko lang, ‘Sige, let’s just go with it.’ The important thing is that I’m in showbiz already and we’ll see what kind of work would get me there in that music industry,” she shares.

Gabbi Garcia’s career began to take off the moment she was packaged as the next generation teenybopper who also stands as one half of a scream-generating, kilig-inducing love team. Today, as she and her onscreen partner and good friend, Ruru Madrid, are transitioning out of their team-up to work on their individual careers, she credits their partnership for the lessons—both professional and personal—that she’s picked up along the way.

“At first talaga, the love team really helped me in my career, and I felt like having a love team is also being collaborative with another artist,” she explains. As it turned out, the experience helped her realize how much more she wants to achieve within her own time in the business.

“When I saw that Ruru and I were slowly taking our own paths, sabi ko I would take this opportunity to really express and show people who Gabbi Garcia is.” This time, she’s no longer Gabbi Garcia, the ka-love team of someone, but Gabbi Garcia, the  artist, as she likes to put it. 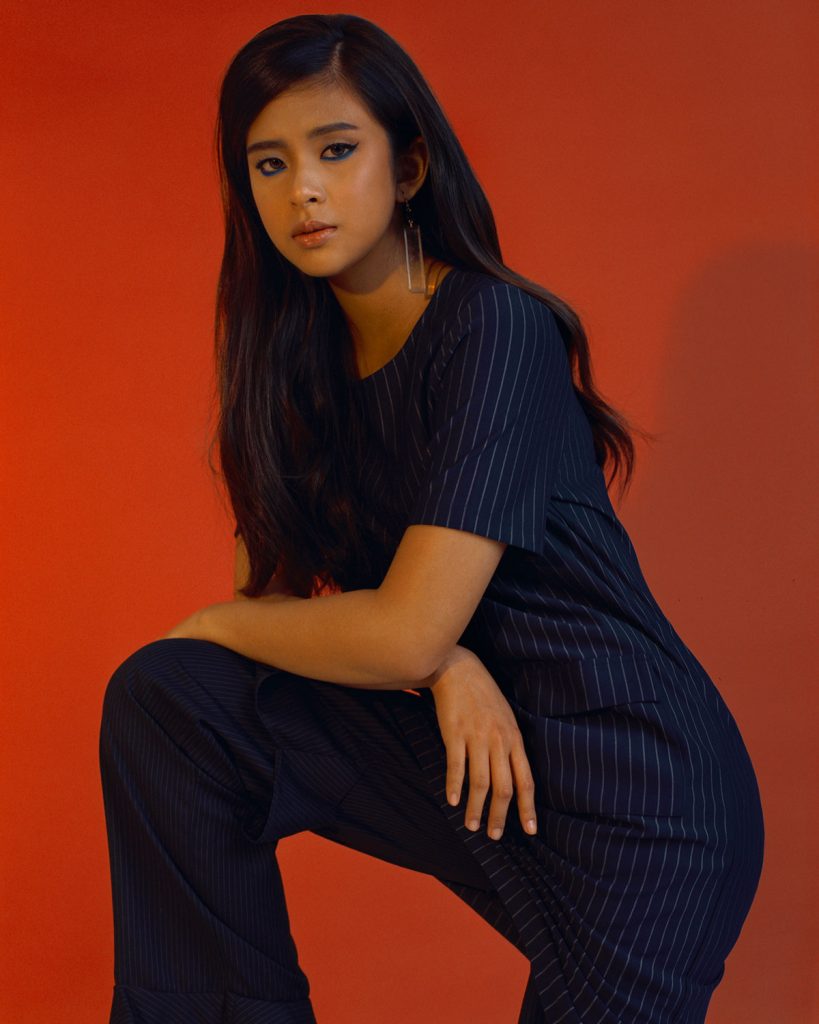 Gabbi recalls she had to take different paths before deciding it was ultimately music that was the most natural fit for her. “When I was in high school, uso ’yung mga bands, and I discovered I had a love for The Script, Maroon 5, ganyan… And then, [my friends and I] started putting up a band and we performed in different gigs,” she recounts.

It was at that point that Gabbi, only 14 years young at the time, became her high school band’s lead vocalist, performing at bars like 19 East and Bagaberde. It was the real deal, as real as performing in the local gig circuit could get.

These days, she’s no longer switching back and forth between her passions, claiming with a quiet confidence that she can—and will—pursue them both.

“Whenever I sing, whenever I perform live, I feel like I’m in the safest place because I express myself through music. With acting, it’s not my comfort zone, because I tend to be more out of the box and more challenged when it comes to [that]. I would say my first love is really music, but then I slowly learned to love acting as well,” shares Gabbi. “You can be a multi-talented artist, so I would not pick [between the two]. I don’t have to.”

Gabbi may be young, but she knows better than to leave her fate in other people’s hands. Or maybe that’s exactly how we know she’s young—because despite what other people might tell her, she still wants to do things her way. 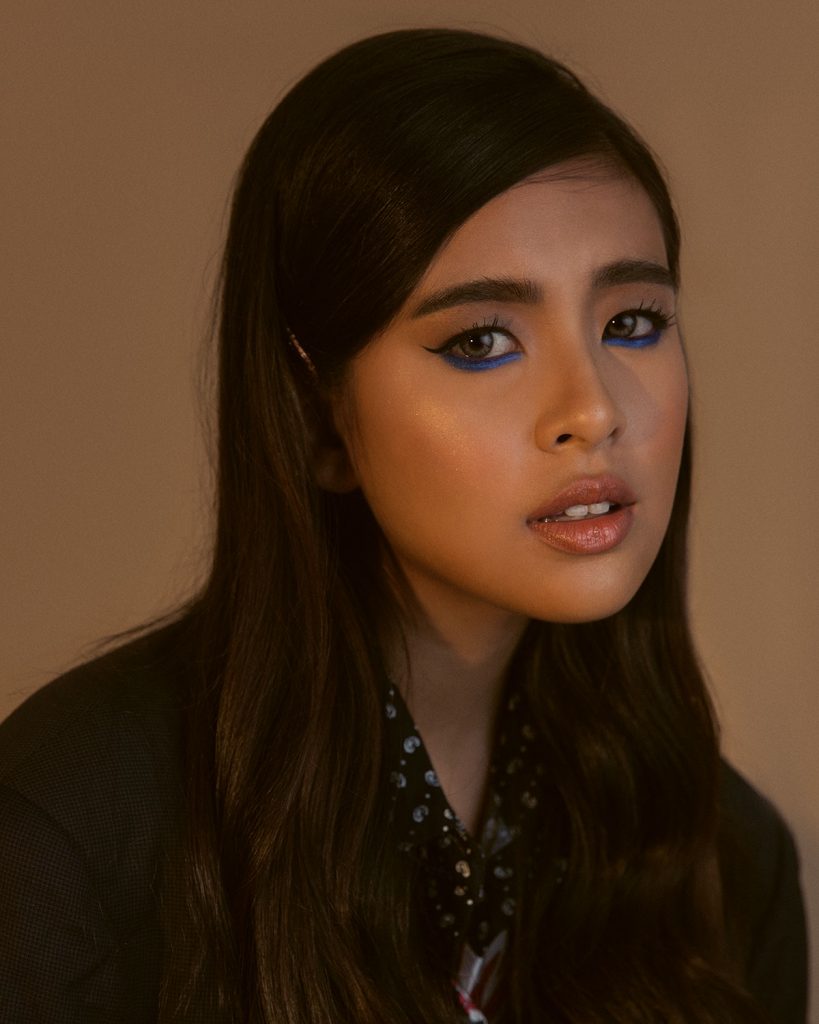 With the release of her first single, All I Need, Gabbi gives everyone something to talk about. What merits recognition though, is not simply the sound of her voice or the way the track was laid down, but the fact that the entire project was self-produced. “It started last year, before Encantadia. A long time ago. Kuya Christian [Bautista] saw me singing in one of the noontime shows of GMA. He heard me, and then he asked me, ‘Bakit wala ka pang album? Why are you not singing in GMA?’ Sabi ko, ‘Well, no doors are opening yet, and wala pang opportunities, so I have to wait.’”

And wait she did. When she and her collaborator, crooner Christian Bautista, were both cast in the remake of the highly successful primetime fantasy series Encantadia (which Gabbi identifies as both her dream role and her biggest break) in the first quarter of 2016, their plans to make music had to take a backseat until the show finally reached its end.

“Mga June or July [of this year], Christian texted me na, ‘Do you want to pursue it?’ [And I said, ‘Okay, tara!’] And then, first he asked me what type of music I want to sing. Sabi ko I want sana R&B, something that my age could relate to, ’cause that’s the biggest market that I have now,” she says.

After writing All I Need with Christian and tapping her sister, Alex, to help with the melody, Gabbi made sure to stay on top of each and every development the track would eventually go through. “We were really all into it. Kada edit nung track, nandoon kami, we were deciding on what to put, how it would [sound], how it would appear,” she  adds.

Gabbi is also working with one of her good friends, young actor (and former SCOUT cover boy) Khalil Ramos, whom she handpicked to direct her breakout music video. She also collaborated creatively with award-winning director Petersen Vargas and his partner Shin Lopez.

It’s easy to package celebrities into two-dimensional figures we could easily remember, compare, and contrast with other two-dimensional figures, but can the same practice be made to the current generation of artists who embrace interdisciplinarity? Today’s up and coming celebrities are not immune to this affinity to be a wunderkind. In fact, they’re the quickest to embrace different levels of artistry without being boxed into any one of their desires; it’s the rest of the industry that needs to catch up.

“I want to make them feel that there are some artistas talaga who really want to try and dive into that artistry, in music.” In the wake of Gabbi’s emergence as one of the local music scene’s latest attractions, she has become even more committed to knocking over any and all stereotypes people seem to have ascribed to the local celebrity.

“I [want to tell them] that I’m more than just a pretty face. I’m speaking on behalf of the artists who really want to explore music but [are] scared. We’re set to have an image, na you’ll [just] be like this, and like this. Now, I want to tell them that no, we could also be [something else].”

With no definite plans for the near future, Gabbi is at least sure of one thing—that it doesn’t matter where the road takes her, because she chose, without a shadow of doubt, the right one. “As a person, I’m really unpredictable. I don’t want it super planned. Not naman [that I just] go with the flow, but I want it to be spontaneous. But five years from now, I’ll probably be in the same industry, but I would be creating more pa. [I’ll be creating] more art, I would be performing more,” she says with  conviction.

Gabbi also hopes that other young dreamers could learn a thing or two from her experience. “Life is really short, and there are so many ways to speak your mind and [to] express yourself. You have to be hungry all the time. Stay hungry. You have to be eager, and you [have to] always think beyond. Think about the future and never, ever settle for [one] level of your dream.”

Afraid she’ll wake up one day no longer feeling the urgency to learn, Gabbi urges everyone to keep exploring. “I feel like millennials and teenagers nowadays should always stay hungry for learning. We’re actually lucky that there are so many means now for us to learn, [so] ’yun lang. Never stop learning,” she says.

Perhaps her own lyrics say it best: Don’t care what you say, I’m gonna do what it takes for me to see that I’m all I need. There will be more dreams for her to dream and even more work for her to put in, but Gabbi Garcia, the go-getter that she is, is poised to take on the challenge head on. And yes, she’s no licensed pilot—at least not yet, who knows—but Gabbi Garcia is certainly in command and in control of her soaring  career.

Life is good. The weather is getting a bit more chilly every day,...