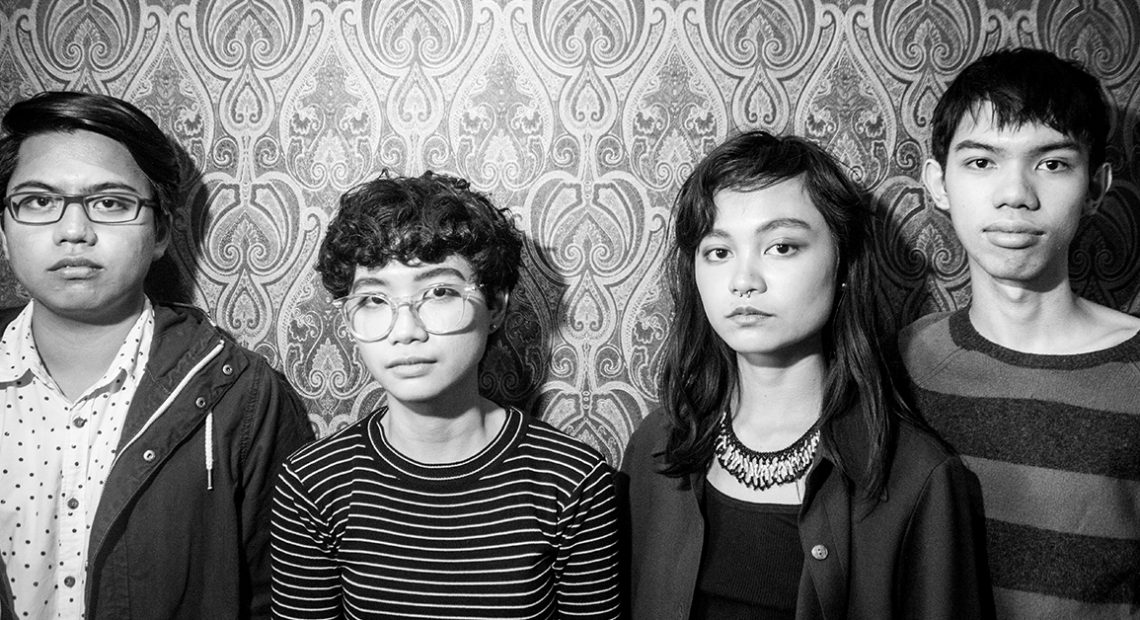 The year was 2011. Before the advent of the K-pop invasion and reign of the primetime TV kings, the local music industry seemed to be taking its last breaths. Bamboo had just concluded their nine-year journey. Sugarfree held a grand farewell concert. Other big names, such as Hale and Rivermaya, were also slowly fading into the background. Even NU107, the leading rock music station in its heyday, had signed off officially. It appeared that many of the main movers of OPM were hanging up their boots. And why wouldn’t they, when major labels only cared about commercial viability, mass appeal, and if your name was Daniel Padilla?

Also read: We can’t wait to listen to Ourselves The Elves‘ debut album ‘Self is Universe’

The circumstances weren’t exactly ideal if you were an aspiring artist mourning your forlorn idols. But for Ourselves the Elves, it couldn’t have been a better time for them to break into the music scene. “When we started out, we had no idea how to do it,” admits frontwoman Aly Cabral. “We were kind of just winging it as we went along—playing gigs for free because we had no idea we were even supposed to be paid.” If that isn’t telling of how passionate they are as musicians, maybe their solid seven-year streak as a band is.

When they met in 2011 at the University of the Philippines, where Aly and fellow founding members Ponch Salvador and Aki Medina were students, the trio hit it off and decided to form a band. “We really just wanted to cover songs from Scott Pilgrim,” laughs guitarist Aki. Their affinity for the graphic novel inspired their name: Herself the Elf is the title of a song by Scott Pilgrim’s fictional band, Sex Bob-omb.

It was only a matter of time before they brought their talent outside of their circles and onto the stage. Soon, they began playing small gigs here and there—from Route 196 and Saguijo back when they weren’t the revered institutions they are yet to other lesser-known dive bars that don’t even exist anymore. “We had to do everything on our own—booking shows, promoting, recording. During the time we came out, there was a lot of respect for new artists. I guess because there was no template for us young, independent bands to follow,” Aly reveals. “New artists nowadays have it much easier, especially with social media. Anyone can put themselves out there and be discovered.”

During the time we came out, there was a lot of respect for new artists. […] There was no template for us young, independent bands to follow.

And true enough, it was through the internet in 2015 that they met their bassist, Paula Castillo. “We didn’t have a permanent bassist. We were thinking of either continuing as a three-piece or looking for someone who fits,” shares Aki. “And then we found her.” “I posted a cover of Beach Fossils,” Paula quips. From there, the rest was history.

Ourselves the Elves’ sound has been dubbed many things—garage folk, indie, country rock, music-for-floating-on-a-cloud, and more. The four members have a palpable musical chemistry that translates sonically in their favor. Their stripped down style fits like a glove with Aly’s delicate singing—evident in their 2013 EP, It’ll Be Alright—and also complements their use of reverb and playful synths. But all things considered, emotion is the band’s smoking gun.

Read also: Teenage Granny creates music out of noise from the Internet

Take their 2015 EP Geography Lessons. The four-track release, which served as the soundtrack for Petersen Vargas’s short film “Lisyun gng Geografia,” transports listeners to a more tranquil space, but only until it proceeds to shatter your heart. In the opening song, “Baby, I Love You So,” Aly sings about surrendering your soul to a person, while the apologetic Longing For laments over a relationship lost.

The same sentiments of yearning and inner conflict are carried over to “Uncertainly,” until finally, “Cincinnati Clocks” draws back the curtains on your mental landscape to reveal a picture of sprawling freeways, stars, and stopping time with your lover. Geography Lessons is a pilgrimage of love, mapped out in four songs that build up and blossom as you listen.

This gradual cultivation is also reflected in the band’s attachment and approach to their art. “With most of our songs, we let them mature and ripen for a few years,” says Aki. While most artists would prefer their own hands at the helm of their creation, the band allows their art to lead them. “We let the songs mature, not just in terms of technical structure but also the context surrounding it. Sometimes, we play something and it feels different when you perform it another time. We learn the song in different ways and in different perspectives,” Aly explains. “Depending on where we are in life, we’ll give it a few months or years and later be like, ‘Oh, I get what the song is trying to say now.’”

“We let the songs mature, not just in terms of technical structure but also the context surrounding it.”

For a band that has been together almost a decade, constant reinvention seems to be key. But how does one give in to evolution while keeping your feet on the ground? “We’ve been playing for a while now, and I guess we just kept going,” recalls Aly. “We never settled for less and made sure we remained honest with ourselves. Authenticity is a struggle many artists go through, but we were lucky enough that people respected and connected with that.” When trends come and go in a New York minute, indeed, planting your feet in the ground becomes an act of rebellion in itself.

Having a solid relationship outside of the band room certainly helps, too. “It’s important to understand that skill isn’t enough to be in a band. You have to work with the right people that you actually like, or else it will be hard to jive together and come up with anything good,” exclaims drummer Ponch. “It’s like a marriage, really. I mean, like we mentioned, we grow with our songs, but we also grow with each other.” In turn, this collective character development plays a part in the grander scheme of community. “When we live in harmony as a band, we can apply that energy to the people around us and live harmoniously within the entire music community,” Aly emphasizes.

This ability to make a positive contribution is just one of their measures for success. While the band has earned multiple plays of its songs online, numerous headlining gigs around the Metro, and proliferating recognition, it all comes second to being able to connect with listeners.

Some artists equate success to popularity, but to us, it matters more when our audience can relate to our songs.

“Some artists equate success to popularity, but to us, it matters more when our audience can relate to our songs,” clarifies Paula. “Quality over quantity. You could get all the ‘likes’ but how many of those are from people who even truly care about your music?”

That said, it’s clear that the band doesn’t aim to please—but that is implied in the best way possible. Incidentally, the band’s ethos is rooted in a quote from fellow artist and filmmaker, Kidlat Tahimik. The saying “Pakinggan ang sarili mong duwende,” which translates to “Listen to your inner elf,” urges one to honor your unique way of seeing the world. This time, their own “elves” are leading them to a new path on their musical journey.

While most of their material has been centered on themes of love, the band affirms that their next releases—particularly their upcoming debut album—will take a slightly different direction. “Right now, we’re working to get out of our comfort zones. It’s a bigger sound,” confirms Aly. “It’s still going to be us, but more driven towards self-reflection rather than being about a person loving another person.” “We definitely have more creative freedom in our album,” Paula adds. “We recorded Geography Lessons as a soundtrack to someone else’s film. Now, we’re just doing it for ourselves, while merging the influences we’ve picked up along the way. We’re certainly not the same people we were seven years ago.”

And to end with an answer to the most important question you might still be asking: no, Ourselves the Elves aren’t actual elves. However, what they lack in the magical creature department they completely make up for with their awe-inspiring talent and unique sound that have propelled them to become one of the most loved local bands of today. That is its own kind of magic.

This story is originally published in our 31st issue and has been edited for web. The digital copy of Scout’s 31st issue is accessible here.

Quarantine has led to creatives working a different sort of magic, and it...