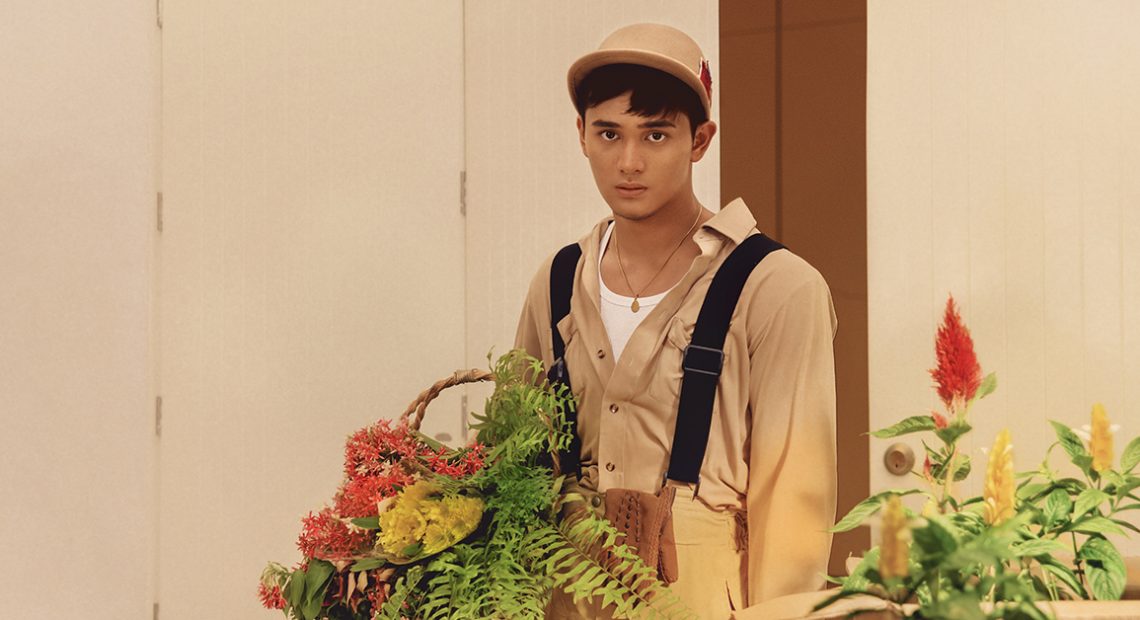 The day I am to interview Ruru Madrid is the day after the Oscars in California, which is about 11,000 kilometers away from our shoot location. It’s a Tuesday in Makati, a bright but fatigued city. Its residents rise early. It is just another weekday.

We’re clearly on the cusp of summer, but the sights suggest fall, a prospect that doesn’t belong to us. It’s 34° with no cloud in sight. On my way to the location, I ascertain it’s not autumn. The loose objects I see swirling above pedestrian’s heads are garbage. I make out a burger wrapper, maybe a cup, among the dry leaves.

On Pasong Tamo, flowers are being arranged, lights erected. I’ve arrived and the SCOUT team is preparing for the shoot. The location is an event space on the burgeoning street, the address of advertising agencies, art galleries, car dealerships. It is very busy. We are in a tall warehouse painted white, and there are ferns, loose kalachuchi, celosias on a table. There is a large print of a desert scene splayed out on the floor.

It’s been an hour since call time, and the food has beat Ruru to set. Burgers are handed out for lunch. There’s chatting while we wait. There’s talk of Ruru coming from a shoot, being exhausted. There’s a text about an accident on Ortigas, allegedly involving a truck. The details are ambiguous, as they are about things that happen often enough.

Ruru arrives, is brought to the entrance by a black vehicle. He’s much taller than I anticipated. To say that he’s of princely stature would not be wholly inaccurate. He’s been cast as royalty before. He was named after a datu from Zamboanga, named Ruru Kiram. Later, Ruru tells me he’s never met his namesake. He has only been to Zamboanga once.He shakes hands with the men on set, touches cheeks with the women. After the necessary niceties, Ruru is whisked away to hair and makeup on the second floor of the location. He’s cordial, patient in his chair. He indulges personal questions. Ruru tells me about 26-hour workdays, family, and what it’s like to be in billboards at 20 years old.

“I wasn’t born in Zamboanga,” he says, clearing the air, finding my misinformation a little funny. In published profiles, Ruru is introduced as a person from Mindanao, born in Zamboanga Sibugay. He tells me this is inaccurate, because he was born in Makati. The news of his false origin must have come from confused press, or perhaps PR gone awry. Ruru broke out onto the local celebrity scene, was “discovered,” when he was just 14, on a GMA Network show called Protégé. Contestants on that show represent cities across the Philippines, a sort of pageant-format contest. The young aspirants compete in teams according to region.

Ruru explains that he was the Zamboanga contingent despite being a Manileño because all the spots in the capital were taken. “Wala nang slots sa Mega Manila,” Ruru recounts. “They asked me kung ano province ng parents ko. My mom is from Zamboanga so sabi [nila], okay, pwede ka naming ilagay doon sa Zamboanga.” Ruru seems aware of the arrangement’s silliness. He can laugh at the fact, six years after his first stroke of luck. He was 14 then, perhaps too young to comprehend the failed attempt at regional diversity. Perhaps he knew it wouldn’t have made much of a difference.

In his mind, he was succeeding on a long-standing dream, one he’s had since he was a child. “Bata pa lang ako gusto ko na maging action star eh. ‘Yun ang pangarap ko,” he confides. Ruru betrays a fascination with fame common to his generation. It’s common to me, my friends, and all the people I meet, whose names I can’t remember.

At an early age, Ruru recognized the need to claim significance, to become something, to go viral. The difference between me and Ruru is the ability to admit it. And perhaps because of his stately appearance, the dimpled smile that launched a thousand “Rurunatics,” Ruru made something of that nagging compulsion and was discovered.

I decide not to ask him about his relationship with Gabbi Garcia, a frequent co-star with a blossoming career at their shared network. He and Gabbi have portrayed each other’s love interests, but recently, the romance has plateaued, and the distance has piqued interest. I’m familiar with the canned response: He’s said in interviews that they were pursuing their own projects, growing as actors. It is nothing personal.

Instead, I ask him about the career he seems particular about advancing, and where he intends to take it. Ruru tells me about vetting roles, engaging with his scripts. He tells me that the only television he watches is his own shows. He tells me he missed the Oscars.

“Nasa taping, eh,” he says, referring to a shoot for the show Sherlock Jr., in which he plays the titular role. The shoot began at seven in the morning Philippine time, the day before our interview. It’s the same shoot he came from before ours, the reason why he was late. Taping for Sherlock Jr. wrapped at 9:00 AM the day of his shoot with SCOUT. I think of the flowers arranged by stylist Mav Bernardo and photographer Cenon Norial III. I am relieved he got a bit of sleep.

“Around-the-clock taping comes with the job. […] Good health appears to be the copious price of becoming somebody.”

One wouldn’t be able to tell by looking at Ruru, who works out three to four times a week. “Sobrang into martial arts ako. I do muay thai, boxing, jiu-jitsu,” he says. He does this in between regular shoots for Sherlock Jr., which occupy three days per week.

Despite the ills of his industry, Ruru seems intent on staying. His long-term goal, his place in the big picture, is the director’s chair. “‘Pag matanda na ako,” Ruru says, “gusto ko gumawa ng pelikula. I’ve always wanted to be a filmmaker, director, scriptwriter.” He attributes the dream to the time he’s spent in the industry. It’s been six years since Protégé. “Dito na ako tumanda eh,” he says, before I comment that he’s nowhere near old at 20. He gamely reconsiders. “Dito ako lumaki.”

Ruru is sent back to the makeup room before the shoot can start. The stylist has requested stubble, perhaps to add dimension to the face, perhaps to make it look a little older. Hair is painted on to his chin. Ruru is still in his jeans and red Henley tee, the clothes he wore to set. He looks young and speaks even younger, all dreams and workout routines.

Among the billboards on Guadalupe, the part of EDSA that runs over the Pasig River, there is a photo of Ruru and Marco Gumabao, his friend and co-actor. They are posing for local clothing brand Bench. Ruru is ecstatic about the billboard. He tells me it’s his first one. In the photo, the setting is a beach, and the two men are walking up the shore, in jeans.

Ruru appears different now, only a few months after. He’s cut his hair shorter. Director’s orders; the cut was necessary for the role. Ruru is finding himself in the lofty position of getting exactly what he wants. He is now earning his keep. He is working into the mornings. He is too busy to make out the trash in the air.

There is magic being assembled around him, but to him, it is just another set. Ruru is present, committed, and a little exhausted. But that matters little for now. There’s another shoot waiting.

A year later, and Beychella still managed to eclipse Coachella and break the...