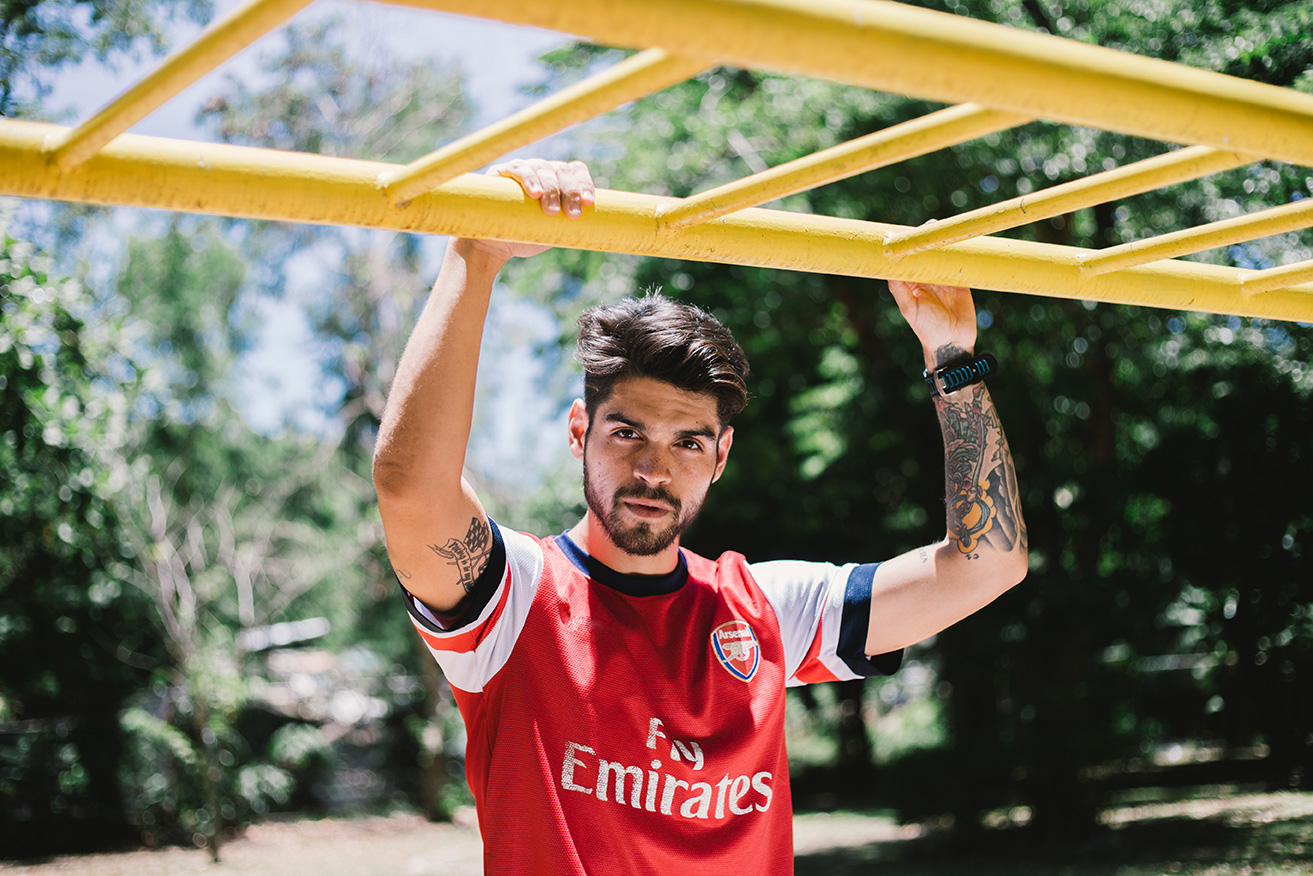 Nowadays, Ivan Carapiet is pretty chill. The Filipino-Armenian Formula One driver-turned-triathlete and actor can casually stroll across a park a little late in the middle of a warm Monday morning for a shoot, and his disarming charm will make everything seem like it’s okay. We’re here to live a little. Even if it’s stuffy, and even if we all have to surrender and scurry back to the office after all this is done.

He, in that familiar South boy way, greets me with a “what’s up, my [n-word]?” and tells me about a huge slab of bison meat he just scored. It’s the leanest beef out there, he says, and I’m free to come over so he can cut me a frozen slice. He’s celebrating his birthday soon at this popular gastropub in the Fort, and we’re all invited. Everything, every little bit he lets go in all of our correspondence so far, tells me that his life is going pretty well right now. Despite all that he has to do, all he’s trying to fight for, and everything he’s trying to fight back, it can be claimed that it is, indeed, all good.

Baron Geisler makes a lot of waves every now and then as this generation’s Mainstream Bad Boy, but if Ivan had been a little more famous at least four years ago, he might have given Baron a serious run for his money. The Ivan Carapiet we see before us now is an Ivan who fought his way out of depression, alcoholism, and addiction. Even though he’s been sober for four years, every day he lives is a personal crusade for redemption, a tightrope he knows he has to walk carefully.

So where did all of this begin?

I grew up in a dysfunctional family. I’m the only child; both my parents would party a lot. They’d drink regularly, go out, so I grew up in that environment. And growing up, my father and my uncle were both professional racecar drivers. So when I was younger, I’d wear his suits, I’d dream about being [a racer].

I saw what it did to my family, all the alcohol and all the partying. They became very irresponsible. So I always promised myself I’d never do it. I’d stay sober. I wouldn’t follow in their footsteps.

I started racing, fortunately. I had a good five-year career. When I got to the end, my sponsor pulled out. Financial difficulties and whatnot. Then I got really depressed, so I started drinking. I started doing all sorts of stuff. Basically, I was so angry and so frustrated that I could not pursue my dreams because of money. I was so immature that I let it out through numbing the pain, through alcohol and other things.

You promised yourself you wouldn’t follow their path. How did you think when you were already in that?

When I was in there, I was numb. When you’re on heavy alcohol and other bad things, it just numbs you out. You don’t even think of that. Whenever I’d drink, right away, my problems, my frustration, all my depression in life would go away in that moment. But when the high would run out, man, the world would come down on me. Flashes of my life. When I start feeling that shit, I’ll make sure right away to get intoxicated again, so I could erase and put it under my bed.

That went on for a while, for four years. My family saw that I was self-destructing. I wouldn’t do any work; I’ve had offers to act, offers to work in a company, all these opportunities, and I just said, “Fuck it.” My lifestyle was rock and roll.

When was the moment you decided to get your shit together?

There’s a lot, man. I’ve been to rehab three times. First one, I was sent to a rehab facility in Batangas. It’s military-based; you do 150 push-ups and sit-ups in the morning, you scrub the floor with toothbrushes. It put me back to reality, but when they did that to me, they were just scaring me. I didn’t want to change. So it took me like five years to really figure out if I wanted to change.

I’ve been clean from alcohol, I’m happy to say, for four years and three months.

This is how sick my mind is: the last time they put me into treatment, in my head, in my sick little mind, I’m like, “I’m still gonna do it once a week when I get out.”

Then when I was in treatment, I received a phone call. My father has that lifestyle also, and he passed away. He OD’ed at 50 years old. So when that happened, that was a sign from all the gods in the universe. When that phone call came, that was it, man. It’s a sign from God and from [my father]: “Ivan, it’s time to end it. You don’t want to follow your father and be stupid.”

I was in Cebu, and Cebu changed my life. Cebu has the best facility for alcoholism and other things.

After that phone call, how easy was it to get back on track?

Of course it took me a while. I mourned for a bit. Like I said, I draw power from all my negativity. That’s where I get it, until now. That’s no bullshit.

What’s the main thing keeping you in line?

First of all, I’m not lying to myself anymore, like I used to every day. When I’d be fucked up, this is what I’d do: I had a room filled with my trophies, all my championships from racing. I’d get so fucked up, I’d sit in it and say, “I’m gonna come back to it. I’m gonna do it.” But I’d never do it. It was all bullshit. It was all in my mind.

Now, what I say, I do. I walk my talk. Triathlon has saved me. I found my racing there. I push myself. When I push myself, I find myself more. And I’d been longing for that. I get lost in my longing to compete. And it’s a big thing for me; I think I’m a born racer.

But you also have acting.

What would you do if that ever happens?

I don’t know, dude. When people would ask me, I use the tools of the facility. It’s so cheesy, but I live one day at a time. I never promised anybody I’d stay sober forever. You can’t say that. I can’t say that. I can’t see the future. It’s so cheesy, but it’s kept me sober. Today I’m gonna be sober. When I get urges, I wake up in the middle of the night. I taste what I used to do. I’ll wake up at 2 a.m. from vivid dreams of me doing the crazy shit.

When you wake up from that, how do you deal with it?

Who are the people keeping you in line right now?

Of course, my mother. My mother’s there for me. My family. My friends are like my brothers. I’m an only child. My best friend Matteo Guidicelli, he got me into triathlon. I race with him, he keeps me in line. He’s younger, but he’s the more responsible one, because I’m still a bit crazy. I’m sober, but crazy. I have my other friend Marlon [Stockinger], all my friends, they understand my situation. When we’re out, they don’t offer me drinks. They know I don’t drink; they just give me Coke Zero or coffee, and I’m happy with that.

It’s good that they don’t enable you.

No. A big important thing I would fall back on is whenever I’d get out of the facility before, two times before this, I’d hang out with my old friends. As much as I loved them, I had to let them go.

[pull_quote]I never promised anybody I’d stay sober forever. I can’t say that. I can’t see the future. It’s so cheesy, but it’s kept me sober.[/pull_quote]

Do you think how the world is right now enables people’s depressions and, subsequently, their addictions?

That’s the best excuse. That was my excuse. You have hardships, you find a substance to block it out. That’s so common already. But no, other people are going through 10 times what I’m going through, but they don’t mask it with alcohol and partying. It was just my immaturity.

How long did it take you to acknowledge your own weakness?

Well, a while. I’m very hard-headed and prideful, so it took a while. It takes a while for me. Until four years ago.

How do you deal with your depression through acting?

It’s also my outlet. Acting lets me fucking express myself. I’m not an artsy person, but when I go on camera and I portray somebody else with a sad, deep emotion, it feels good. I take all that negativity and use it to make me the character.

How do you deal with an industry that is much more likely to enable your vices?

In my industry, it’s very dirty. It’s a common thing. When I work—and I know the people that partake in it—I don’t hang out with them. I’ll be respectful, but when the time ends, I won’t go where they go.

What would you have to say to people going through what you went through?

You can always force someone and lock them up, and put them in the basement, but at the end of the day, at least 10 percent has to come from you. If there’s no willingness to change, you’re not gonna change. Maybe you’ll be scared, six months you’ll stay sober, but you’re gonna go back if you don’t wanna change. It has to come from within.

Other people won’t change unless there are life-threatening situations. I was like that.

What do you have to say to people who have to deal with someone who’s going through the same?

It’s very hard for a spouse to have a loved one that has that problem. I suggest that you seek help. You can’t do it on your own. Locking him up or taking his money, he’ll find ways. Trust me. We have many professionals already here in Manila for counseling and rehabilitation.

Online beauty shopping can be addicting as hell, but picking the right products...

ICYMI, Twitter will do some spring cleaning this December by deleting inactive accounts....