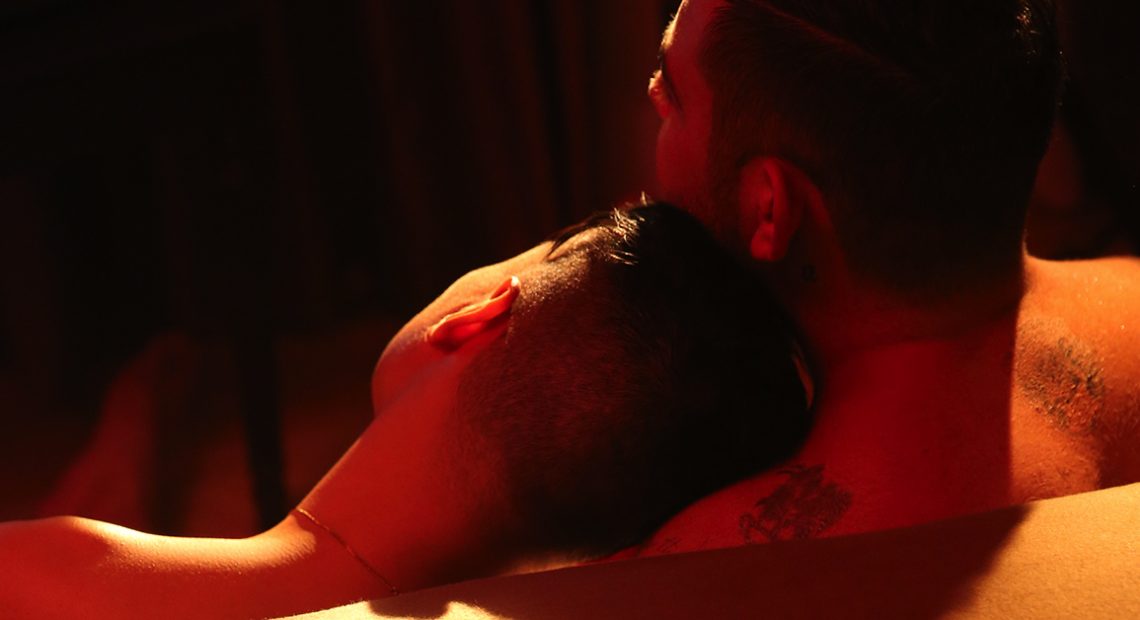 Beyond the controversy that followed the film last week, there is so much more about this film. Featuring Ricky Davao, Meryll Soriano, Jasmine Curtis-Smith, and Albee Saspa, Never Tear Us Apart is a tale about an aging spy, his delusional wife, and their promiscuous son. “Never Tear Us Apart is an iteration of intertwining stories of a family under siege, examined through their bedroom personas and their social image via technology,” writes in a statement.

In the film, Whammy gives us an intimate glimpse of their lives. To shoe this, he decidedly shot on iPhone in vertical orientation as if imitating the seamless and never ending flow of images on social media today. It’s pretty much like a cinematic Snap (do people still use Snapchat?) or Instagram story. What a concept!

Before we see the film on the big screen tomorrow, we talk to the director about the film and what it’s like shooting with iPhones.

When I first saw the trailer, I thought the orientation was just designed to fit IGTV (where I first saw it). But later on, I learned that the whole film is actually shot on an iPhone X. It’s interesting. I feel like it might be a new idea to the Filipino audience, but at the same time, we’ve been consuming media with this mobile orientation and shot through smartphones every day. What’s the intention behind it?

We post a photo with a quote on Facebook. We upload a story on Instagram. We send our friends gifs and stickers. This height of modern visual communication as practiced via social media is what drives the intention of using a phone as a camera. It is a form of visual language we practice everyday. Never Tear Us Apart is a translation study of this contemporary storytelling language into the cinematic medium.

We post a photo with a quote on Facebook. We upload a story on Instagram. We send our friends gifs and stickers. This height of modern visual communication as practiced via social media is what drives the intention of using a phone as a camera.

Can you take us to the time when you decided to do this film? How did you conceive the idea for the film?

I’ve always wanted to make a spy film. I wanted to have a film with a dubious villain, cheeky dialogue, and excessive explosions. Spies live double lives and I feel that’s how we live through our phones—a carefully crafted image for the public to consume. We create a secret life for our loved ones and an even more secret life where we are most intimate.

I wanted to use the language of the phone to frame the story of my spy. I have always loved the playfulness made possible in communicating using gifs, stickers, and stories. It’s all there—the treachery of the internet, the funny banter via a pastiche of mediums, and explosions in the many ways the word may connote. Ka-blaam!

Take us behind the scenes. How many iPhones did you use to shot the film? And how is it different from using the usual cameras?

We shot the film using three iPhone Xs. What was most difficult about the process were the restrictions that we had placed upon ourselves. We shot the film vertically to properly emulate the phone as a screen. We did not use any lenses in shooting the film. It was quite different from shooting with a normal film camera. As we learned from the process, we couldn’t cheat our way into making things beautiful or cinematic. Production design had to be on point nearing complete authenticity. Light registered differently on the phone. We lacked the depth that using lenses would have provided.

It is not uncommon to shoot a film using a phone. Most popular examples of these films are Tangerine and Unsane. But, given our intent and the themes of the film, we wanted to retain the spirit of a phone camera image. We made a game out of it. We wanted to do something new with the medium. It was undoubtedly difficult. But we didn’t take it too seriously. We had fun.

I didn’t do the production design of my film this time around. From my experience in the past it is very hard to concentrate on directing while doing something else. After all filmmaking is a team effort. A lot is grounded on trust.

I also saw that you collaborated with designers like Carl Jan Cruz in dressing the characters. Who are the other designers you tapped for this film? And for you, what’s the importance of fashion in this film?

Styling and production design are aspects of Philippine Cinema that I feel are taken for granted. The visual aesthetic is greatly important to me because it is my background as a production designer for film and advertising. It is the cinematic language I am most comfortable with and feel most strongly about.

[The fashion designers we tapped for the film are] Ziggy Savella, CJ Cruz, Josanna, Maco Custodio, Proudrace, and Tropa Store.

The title is in itself a joke. One cannot deny that there is an underlying thought of provocation. But this is in itself the point. The perception of the term as taboo in the context of it as a title echoes the theme of the film. It is the confrontation of something we would not necessarily need to or want to. It is the spy in the spy film. He is who he says he pretends to be but so much more.

There is so much more behind the mask—of what we post on Instagram, what we say we believe in on our facebook feeds, our true intentions behind the complex cat GIFs we send our friends. Some things are limited to the extent of what we choose to see.

But other than the title change, nothing will change in the story or the film itself?

Everything remains as it was meant to be more than any of my other films.

What makes a beautiful film?

I guess in the relation to everything that has happened, it is best to say that a beautiful film is truly defined by not only the filmmakers but as well as the intended audience. As a mainstream film would target the general masses and bring to them a kind of pleasure that they demand, one must understand that some films cater to a niche market. There should be no judgment towards either party. Entertainment and in itself pleasure is defined by the singular audience. To each his own. As clichés are called clichés for the truth that they state, beauty is in the eyes of the beholder.

By Coleen Ramos You’ve probably heard about this by now, but just to...

The chunky sneaker trend is not dead yet. While it’s still thriving in...