Heart Of A Lion 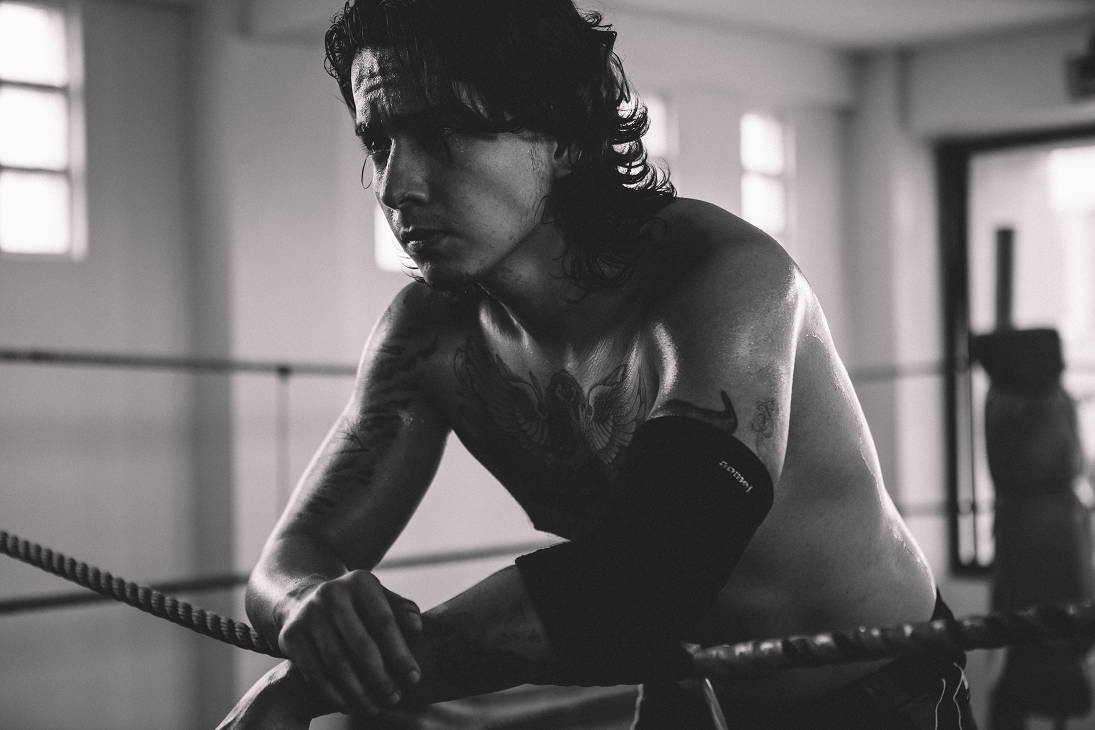 Ask any young, impressionable boy around the ages nine to 12, or maybe a little girl who hangs out with boys a lot, what they want to be when they grow up, and chances are they’re not going to say “professional wrestler.”

Ask him or her if they’ve ever seen any wrestling on TV. Ask them if they’ve ever tried the moves at home after seeing them, especially right after they specifically warn you not to try it at home. Maybe no one wants to seriously consider it as a profession when they’ve grown bigger and faster and more muscular, but everyone has seen how majestic and pompous and amazing and awesome the whole act is. So they try it. They try it, it’s a little cool, then it hurts, then they grow out of it. They grow up to become doctors, lawyers, engineers, businessmen, finding all sorts of nobler pursuits.

But not some people, and certainly not Chris Panzer.

You see, there is a group of crazy boys and girls around these parts who have decided to do something about the lack of professional wrestling here in the Philippines. We haven’t had any since the early ‘90s, when RJ Jacinto—the RJ Jacinto—put up a local ripoff of what was then the WWF; cartoony, campy, and rather hard to take seriously. Realizing that no respectable wrestling trainer from the United States, Japan, or Europe, places where the sport blossomed from, would see the Philippines on the map and think of it as a hotbed of able bodies to train, they decided to jumpstart a scene themselves.

And Chris Panzer, a moderately tall, dashing, and athletic young Filipino-American who’s billed from Detroit, is but one of the passionate souls who are part of the fledgling young wrestling company.

“Before I even heard of PWR, I and [former PWR wrestler] Mayhem Brannigan already had a plan of getting into pro wrestling,” Panzer said. He’s suiting up for this shoot, lacing up his boots for a quick match he and a fellow wrestler are putting on just for our camera. We are at this gym in Bicutan, a humble three-storey building where everyone trains every weekend. It is home to a boxing ring battered by the slams and falls and watered by the sweat, tears, and occasional blood of both the athletes and the hopefuls of PWR alike.

“The problem was where? Our original plan was to go to the US and get trained there, which was a long shot,” he continued. He speaks softly and quietly, but with a deep, easygoing voice. Wrestlers are supposed to be loud and energetic by nature, but he’s not that “on” right now. “But there was no holding us back; we were all set to chase the dream. Luckily, we were browsing through Facebook and found this group called PWR. Then that group decided to train for the first time. So we excitedly came up with our ring names, and the rest is history.”

That first group trained for months and months under the tutelage of those who knew what they were doing and had chanced upon the group, including one of its current standard-bearers, Bombay Suarez. After deciding they were ready—regardless of whether some of them actually, objectively were—they ran their first official show September last year at the old Makati Cinema Square, because it was cheap and had a boxing ring where people trained boxing (surprise), muay thai, and karate.

And that first show was a modest success, drawing in around a hundred people, which is better than they expected—many small wrestling shows in the States would be lucky to draw half that. On that show, Panzer lost his first-ever match to the guy who would become his biggest rival so far, Ken Warren, who played a millennial that lived his life almost completely on social media. (Warren’s finishing move was called the “Wi-Fi,” shorthand for “Winning Finish.” Panzer would get his win back on the next show later that December.)

The rundown mall, home to watch repair shops, ukay-ukays, and pirated DVD hawkers gave the show a gritty, underground fight club feel that nobody really minded. In fact, they embraced it; Filipino wrestling fans were just glad to see live wrestling with their own two eyes. All they had to go on before was TV and the occasional live show by the WWE, the world’s biggest wrestling company, when they were in the area, and even that had stopped for a while.

“The PWR fans really spoil us because starting from the first match, from the very first move we make, until the main event, they are electric,” says Panzer, emphasizing the word electric. “And they don’t fade there, you’ll see them all over PWR’s social media accounts including the pages of the PWR wrestlers themselves!”

[pull_quote]The rundown mall, home to watch repair shops, ukay-ukays, and pirated DVD hawkers gave the show a gritty, underground fight club feel that nobody really minded. In fact, they embraced it; Filipino wrestling fans were just glad to see live wrestling with their own two eyes.[/pull_quote]

What drives a man, however, to actively beat himself up for a sport that’s all scripted and predetermined? (There’s no point in trying to hide the truth. We know you know what the deal is.)

“I would say the adrenaline rush of performing in front of a very lively, pumped up audience and living the dream,” Panzer explains when I ask him. “Also, going to training and seeing all the guys bust their asses off, and eventually seeing their hard work pay off! I have never seen this much determination on a dream that isn’t chased by many. That gives me a lot of hope, and just being in that ring won’t compare to any other feeling. You’ll just keep coming back for more!”

And there’s a reason why not a lot of people chase this dream. People will have that dream, usually as soon as they see one of their favorite wrestlers jump off the top rope and land on their opponent, but few will chase it. As mentioned earlier, there aren’t that many opportunities around here. And it also hurts pretty bad. Wrestlers get injured pretty often; it’s hard not to when you put your body through so much physical punishment for a living. (WWE wrestlers usually perform three to five nights a week every week with no offseason—you only take a break when you’re injured.) All of them report lingering body pain even after retirement.

That means there is a lot of sacrifice involved, and Panzer—as well as everyone who signs up for this shit, not just him and the guys in PWR—is fully aware of those risks.

“It really takes a toll on our body,” he says. “As early as now, we feel those injuries and some of them don’t heal 100% anymore. It doesn’t get any realer than that! You will have a very hard time getting out of bed in the morning. There are things that I thought I’ll never be able to do, such as jumping off the top turnbuckle. And I’m still aiming to top that. All I can say is I’ll put my body on the line.”

And the sacrifice is not just physical—it can be mental too. Relationships and families have historically been destroyed by a wrestler’s dedication to his craft, and this isn’t any different. Even if the Filipino culture places the highest of importance on family, second only to God and a step higher from videoke.

“Here’s the deal, when you decide to pursue pro wrestling, understand that when you’re starting out, you have to invest everything. [One sacrifice is that you won’t live] the normal life of going to a normal job,” Panzer explains. He works gigs from time to time as a commercial model, and you can spot him on a number of TV ads. He used to hold down a real job, but the hours got too exhausting for him to focus on wrestling. “The training to be a pro wrestler itself already takes a lot of time and effort. You need to be consistent and persistent because the gap of you making it is very small, which is another gamble. From start to finish, you need to be all in. You’ll burn a lot of money, miss a lot of birthday celebrations (maybe your own), you’ll beat your body up from hitting the gym and training in the ring.

“This never ending cycle will burn the shit out of you physically, mentally, and even emotionally. Unless you’re on crack, you can’t do all those things all at once. That is the life. I have a lot to lose, but that is the ultimate sacrifice for the dream.”

If that sounds a little too much just for a childhood dream, you’re right. It is. People have irreparably damaged themselves doing this, and a few have even died either from wrestling itself, or from the effects it has on the body. Someone did once say, and I paraphrase, that you have to have a screw loose to really want to be a pro wrestler. (Not that it’s always a bad thing.)

The childhood dream is based on glory. Wrestlers get a high not only from the physical exertion in the ring, but also from when the whole thing just comes together perfectly. You can see it in the climax of a wrestling match, in moments such as when Panzer hits his finishing move—a badass jumping kick to the face called the Panzerschreck—on today’s dance partner for the camera. That alone is worth the pain and exhaustion.

[pull_quote]“This never ending cycle will burn the shit out of you physically, mentally, and even emotionally. Unless you’re on crack, you can’t do all those things all at once. That is the life. I have a lot to lose, but that is the ultimate sacrifice for the dream.”[/pull_quote]

What if the childhood dream doesn’t work out? Panzer has studied the lives and careers of those who’ve come before him, and he understands that not everyone who takes up the boots becomes a huge superstar. What if all this sacrifice, this pain, this slow, gradual suicide doesn’t result in fame and wealth and success?

“There’s always a job out there. Wrestling is the main priority here. I’ll have plenty of chances for a job, and only one shot for wrestling.”

We take the last shot and finish. Panzer finally gets to relax. He’s sweaty and shiny all over, and his muscles and bones are crying out in agony. He checks out all the photos we took and becomes happier when he sees how awesome they look. He was already enthralled by the whole idea of this, and now he’s happier, despite everything. Despite the compromises he must make in his life.

And why not? After all, who wouldn’t be happy with a little immortality?

This article originally appeared on the August 2015 issue.

“Patay na ba siya?” my blockmate and I asked with our masked mouths....

Heads up, liberal arts majors with a penchant for edgy journalism and Jack...