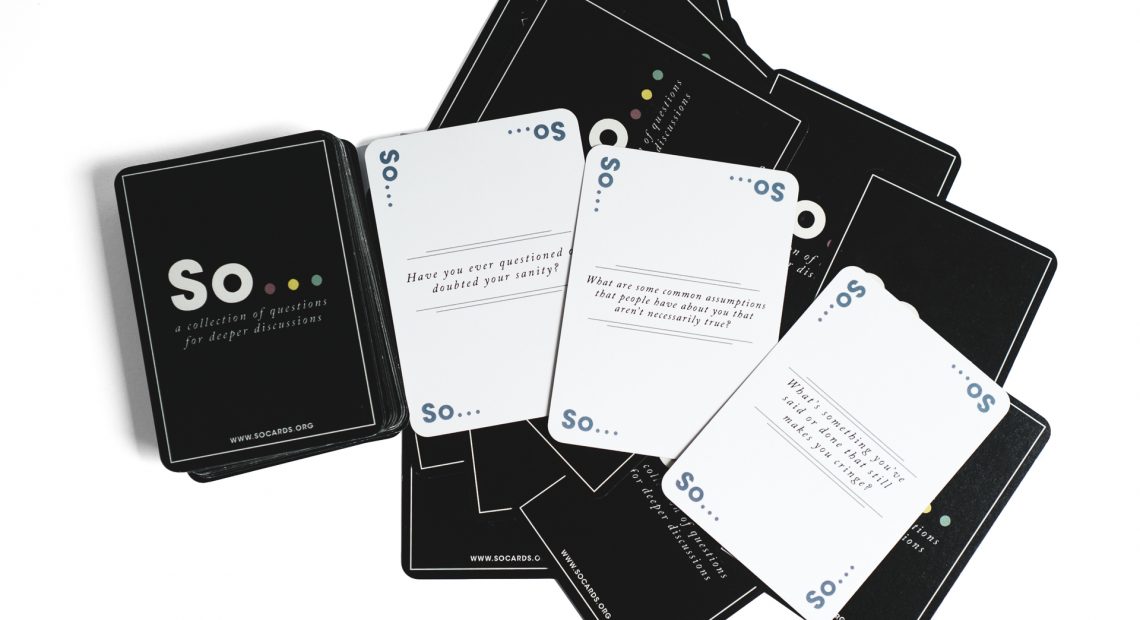 We’re living in a world that the cynics are often applauded. It’s hard not to be cynical in this day and age. Evil’s abundance right now makes being bitter the sane solution to living. This philosophy gave birth to Cards Against Humanity, a board game that releases and applauds the worst in us all. It’s a great release of tension and all. But does anyone miss the good part of humanity in a form of a card game? If you do, you would love So Cards.

This Kickstarter campaign launched early this July and so far, it’s halfway to reaching its goal. “So Cards” is the brainchild of Miguel Luis Calayan. He’s a Manila-born filmmaker, photographer, and writer. Add his “abhorrence to shallow conversations” to his special skills and his CV is complete. He created the game for that reason alone. The result? A card game that is Cards FOR Humanity. It encourages conversations that have weight in it. This card game pushes people to think deep, like really deep for a moment. That is a trait that is lost to us at times.

“What matters is to be open, curious, and present – whether it’s with strangers, friends, or family.”

“What matters is to be open, curious, and present – whether it’s with strangers, friends, or family. These are the cards not against but for humanity, and more importantly, human connection,” the creator explained through the “So Cards” FAQ page.

Watching the video for this campaign will show you people asking intimate questions. It could be as simple as your exes’ common trait to people’s common assumptions of you. Now, we know what you competitive bunch are thinking. How do you win? It’s simple.

“If you connect with one another, if you find out something entirely about a person, if you find out something entirely new about yourself, if you end up going on an endless series of tangents, get lost in the conversation, and suddenly realize it’s 2 am and you’ve bonded over all sorts of topics, then you win,” the creators of the game stated in their Kickstarter page. There are 52 cards in the deck. From the first card to the last, it won’t fail a crowd on having a great conversation.

Sometimes, we need to step back from the toxic, dark b.s. we often digest. Everyone loves a good edgy meme once in a while. But what’s worthwhile in whatever generation is connecting with other people through great conversations. So Cards is what the Trump-Duterte bounded world needs right now.

Photo from So Cards Kickstarter page

Most of you may know Ralph Gonzalez as the guitarist and back-up vocalist...

“Huwag Ka Sanang Magagalit” is my introversion penned and sang by a virtual...

It’s the question that’s been on our minds since 2005. We took countless...