The word “adulting” is a little weird, but “adulting” as in the act of it is really, really hard. This is what Antoinette Jadaone’s latest film Alone/Together shows us. That our dreams when we were younger might take the back seat because of the grim reality we only get to understand after a certain period of our youth.

I’ve seen the film twice. The first was solely for enjoyment, while the second was to ruminate more about the film for an article. It’s a good film, but it’s not something that you’d want to watch over and over again. I guess it’s because of how it slaps you with reality. But really, I didn’t find myself crying in the cinema. I cried after—in moments when I listen to Armi Millare’s “Kapit” and recall who I was and the dreams I made and ask what my dreams are now.

Films borrow heavily from reality. And while we live the reality, sometimes it’s only through films that we realize things we cannot see in our messy lives. So, if Alone/Together made you ponder about adulthood, maybe you should consider watching these films.

Directed by Antoinette Jadaone, Never Not Love You is James Reid and Nadine Lustre’s maturation film. Here, freelance graphic designer Gio (James Reid) pursues the determined career woman Joanna (Nadine Lustre). They get into an intense relationship until their career opportunities change the way they were. 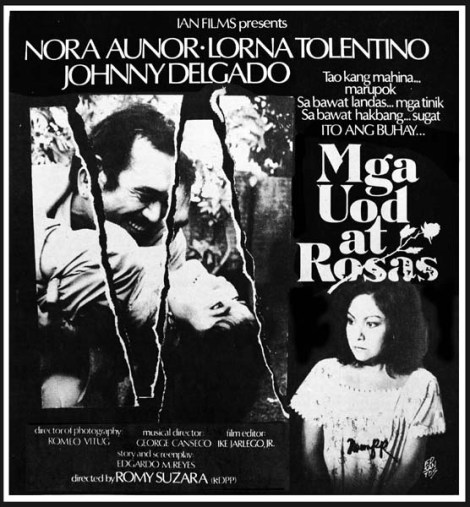 Mga Uod at Rosas is the film adaptation of Edgardo M. Reyes’ novel of the same name. Here, Nora Aunor’s Socorro is in love with their tenant, the struggling artist Ding (Johnny Delgado) who can’t even pay rent on time. As Ding finds his way into the art world, he impregnates Socorro. The problem is: Ding isn’t in love with her. She has to share her time with his art and the woman he truly loves, Nina (Lorna Tolentino).

Don’t watch the film for its romance aspect. Watch it for its commentary on the art world. It’s hard to be an artist, especially when you don’t have the money. And it’s even more difficult to thrive as an artist because there are people who dictate what or who an artist is. In one scene where Ding drinks with his artist friends, a fellow artist says, “Kung tutuusin, tayo lang naman ang nagmamahal sa trabaho natin.” Later, another artist refutes him. “Napag-usapan namin na pwede pang itama ang mali. Iwan mo ang painting,” the latter tells the former. “Sa madaling salita, hindi ka artist pero ikaw ang pinakaseryoso sa art. Pero you’re not artist.”

Kung Mangarap Ka’t Magising is Mike De Leon’s take on a romantic movie. The film follows Joey (Christopher De Leon), an easygoing student who falls in love with a married woman Anna (Hilda Koronel). Set in Baguio, the film delves into issues of career path and love. Joey is musically inclined, but he pursues a course he doesn’t really like just to please his dad. Anna, on the other hand, isn’t happy with her marriage. In Anna’s brief stay in Baguio, the two find solace in each other.

Dagitab is Giancarlo’s debut film which premiered at Cinemalaya in 2013. The film tells the story of married UP Diliman professors Jimmy (Nonie Buencamino) and Issey (Eula Valdez). Their nonchalant relationship is often outweighed by their professions—Jimmy searches for a mystical sword, while Issey is occupied with her work as a literary professor. But their relationship is put to a test after Issey is involved in an alleged sexual relationship with her godson and student Gab (Martin del Rosario).

Although the film is a reminiscence from a middle-aged couple’s perspective, Dagitab ponders on how life should be lived. Was it right that they focused on the academe? What would have happened if their love is like others’? As Jimmy says, “Maybe we’re the failures. We failed because we dropped out of life.”

Stream it on iFlix

How To Be Yours
Dir. Dan Villegas

In How To Be Yours, Gerald Anderson’s Niño and Bea Alonzo’s Anj are caught up between their priorities: love and career. Anj is a driven self-taught cook who dreams of having her own restaurant one day, while Niño is a salesman who motivates her. When Anj becomes a chef, Niño struggles with his career. The film carefully looks at how the passionate relationship between the two breaks apart because of their dreams. It’s an essay on the choices you have to make to build yourself: Is it love or career?

Sleepless tells the story of Gem (Glaiza de Castro) and Barry (Dominic Roque) as two BPO agents. With good performance, Gem is assigned to train the newbie Barry. While it shows us the budding romance between the two, the film is ultimately an exploration of the industry that often lives while the city is asleep. The film also touches on the choices we make to advance our careers and our lives.

Call up your local independent cinemas to screen this film