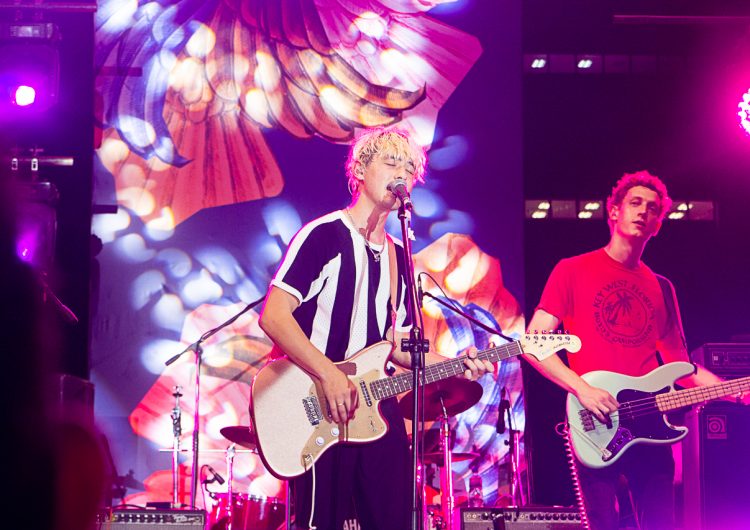 Read more: Our favorite moments from All of the Noise 2018

Luckily, we got to experience one hyperreal playlist at The Rest Is Noise’s Summer Noise 2019. On May 18, acts from all over the world performed their best hits at Greenfield District in Mandaluyong, keeping us fixated on multiple auditory landscapes that, despite divergent sonic categories, jived with each other. It was everything we wanted in a playlist.

If you were at Summer Noise and this collaborative performance didn’t make you dance, I wonder what you were doing. As dream pop group Subsonic Eye started their set, people began bopping their heads without question. Digital synths of “Sun Kissed Skin” oddly made the place cooler for a bit. And it’s true when Subsonic Eye said we’d feel a sense of longing in their music. The show was still far from over, but we already felt the longing for that same night.

Then, striking, sugary, and shuddering beats and vocals started pouring in when Sobs came onstage. When their 2017 hazy and glittery track “Girl” started playing, people jumped a bit higher, swayed a little livelier, or, for the non-movers, stared at the stage a little longer. Well, how could you not? The Subsonic Eye and Sobs combination was quite a sight.

Philippines represent! Okay, we know a lot of equally great UDD songs that have snatched our hearts after “Tadhana” came, but we’ll always find ourselves going back to a classic. Seven years after its release, “Tadhana” is still that song you’d drop everything for just to be able to immerse in the inescapable draw of, well, fate. The crowd didn’t dance, bop their heads, or sway in sync with strangers because they all sang. Every single line.

Although Jakob Ogawa experienced some technical glitches at the start of his set, he didn’t let the emotional connection break. As the audience waited patiently for things to fall into place, Jakob assured the crowd—and the fans responded with a cheer. The artist from Norway proved the epitome of his lo-fi bedroom pop prowess in “You Might Be Sleeping.” Suddenly, the guests were all in their little worlds. If my eyes served me right, there was even a pair who committed to (and slow danced!) to the loping rhythms.

Indie rock, pop punk, and even dream pop. The members of Turnover have always been generous with the music they create, and it was evident in their Summer Noise set. This American outfit might have gotten the most genuine woohs of the night—an indication of their Filipino fans’ thrill to see them again after two years. If the previous performances made us move a little, the introspective nature of “Hello, Euphoria,” made us want to chug down our cups of whiskey with a friend.

Another band that made their memorable return is Australian indie rock group Last Dinosaurs. Of course we missed them, but the period between their first and latest show in Manila didn’t feel that long because their sound has always been ephemeral to a fault. Last Dinosaurs gave us a different kind of high despite our shaking legs and sweat-soaked necks. It was nearing midnight, but we squished ourselves into the undistracted crowd to get closer to the foursome. “Cause I know you’re the one and only,” Sean Caskey sang off the bolting track “Eleven,” and suddenly we’re not too tired to head bang.

Read more: When I grow up, I want to be Japanese Breakfast

“Everybody Wants to Love You”

Okay, we have to give the best stage-stealer award to Michelle Zauner of Japanese Breakfast. Not to be cheesy or anything but watching her set was like witnessing a movie. Michelle was all over the stage, her signature tempos and sticky vocals winning the audience over. Suddenly, everything felt like a conversation between Jbrekkie and the audience in the emotionally-charged, multilayered “Everybody Wants to Love You.” Just when we thought things couldn’t get any better, we were confronted by her iconic cover of The Cranberries’ “Dreams.” Tingling. Chills.

It was honestly difficult picking Phum Viphurit’s strongest song at Summer Noise 2019, especially if you’ll base it on the crowd’s reception. I love yous and squeals were thrown at every single neo soul track, from a more dynamic version of “”Paper Throne” to a slow-paced “Lover Boy.” Watching Phum’s set felt like starting the event all over again because of the renewed wild energy—a perfect match with the Thai artist’s jumps and suave strums. He continued spitting his sunshine music like the young pro he is with almost everyone raising their phones and makeshift tarps, clapping their hands, and singing out loud as if it were a once in a lifetime tryst. He ended his closing song “Long Gone” with ecstatic screams and a slight dive into the crowd. “Thank you for staying late to catch us,” he said. We’re glad we did.

I’m not the most religious person. Hell, I haven’t picked up the Bible...

If you’ve been on the weird side of the internet lately—i.e. Reddit—you may...

By Camille Fernandez If you’re that somebody that tells people that documentaries are...