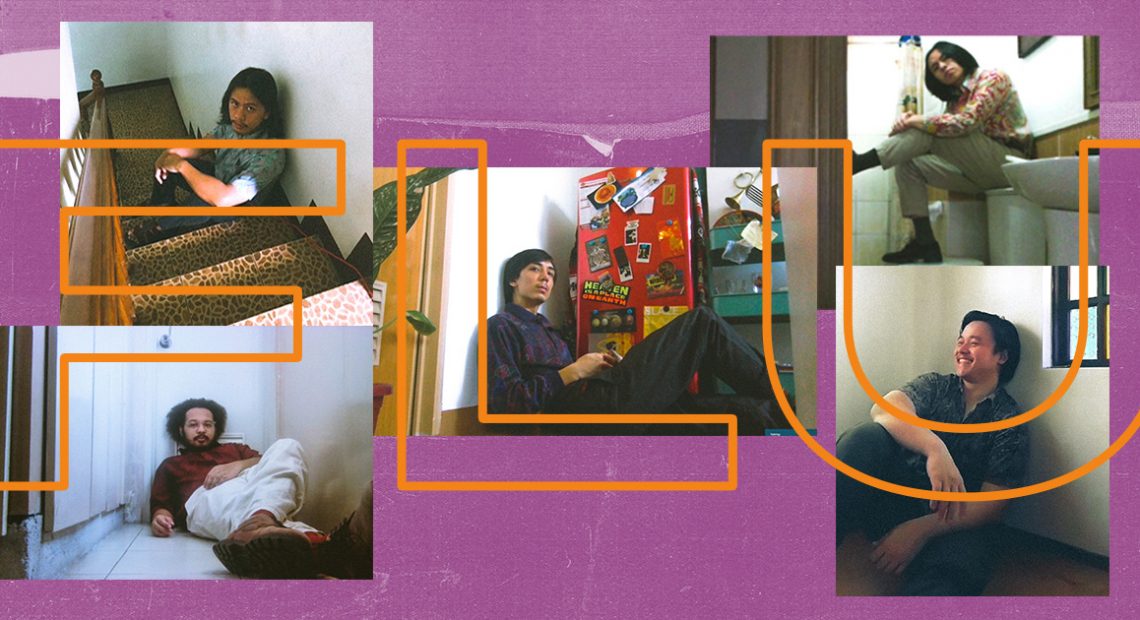 I met funk band Flu where I meet my friends this quarantine: Zoom. Feeling like a fly on the wall in their own friend group, the first thing I thought of asking was their origins.

Here’s the premise: For most of us, a thesis is just a requirement. But to the band, it’s the start of their pact.

Vocalist Deus Vergel de Dios and guitarist Luigi Aganinta have been friends since high school, but it was only in De La Salle-College of Saint Benilde where the band came together. “I became bandmates with everyone, except Deus at some point in college,” bassist Dieter Bautista reveals. “During the term before our thesis, around August to December 2018, I decided to start writing songs for our thesis.”

Dieter later asked drummer Randall Enriquez to pair up with him, also opening an opportunity for Luigi to complete the trio—but they didn’t really jam until the end of the year. “Randall and I weren’t sure yet if we wanted the project to be instrumental or not.”

But thank the universe for that jamming session, really, as it made them discover their Venn diagram. “We just jammed too much Earth, Wind and Fire, D’Angelo, Stevie Wonder and Marvin Gaye so we ended up aiming for vocal music,” Dieter says. A springboard to their formation, Dieter’s goal of forming a Motown band saw the light when they pulled in guitarist John Rae Rebano who was also working on his thesis. “We immediately jumped into a writing sesh after John Rae agreed to join and tried to finish a demo, which eventually became our first single, “Fine Day,”” Dieter narrates.

Anyone who doesn’t like “Fine Day” could be lying. Its soulful, laid-back take on the uneventful passage of time feels like a big event in itself. It welcomes what funk could be aside from a late-night body mover or a vintage club’s go-to sound. And that is a warm, introspective and confessional experience on a hot afternoon. Well, it still is very much a body mover—one that can work even if you don’t know the steps.

Though one of the biggest impressions of funk is typically associated with the ’70s or Manila Sound—with VST & Company, The Boyfriends and Hotdog to name a few—Flu religiously reinvents the soundscape. Also, who doesn’t love a successful passion project?

Their collaborative mindset was evident even in this Zoom shoot, the gateway of our getting-to-know stage. Outfitted in what amounts of green, purple and red, Dieter, Deus, John Rae, Randall and Luigi developed our prompts, vibed with some makeshifts and fucking pulled it off. They know themselves to a tee, and it’s about time we do, too.

In this interview, we see how Flu gives a glimpse of funk’s direction this decade (and why we’re glad to ride with it).

When you were younger, did you dream of pursuing a music career?
Randall: Sort of. Music was already part of the household ever since I can remember. I just realized that I wanted to take it more seriously when I finished high school.
Luigi: I was around 20when I realized I wanted to pursue a career in music. But I had other plans when I was younger.
John Rae: Yeah, I’ve always seen myself playing music, but I wasn’t entirely sure if it would push through. So, everything that’s happening to us now (gigs, interviews, etc.) is still kind of surreal.

Dieter: I started playing bass in high school but never thought of it as a career path at that time. But then I knew I wanted toa career where work would never feel like work. And music was something I can just do over and over and not run out of inspiration and motivation.
Deus: I have always felt that my strength was on the creative side, so I eventually pursued studies on industrial designs, but I also knew then that my [creativity] goes beyond creating things as I discovered early on that I was able to carry a tune. So the plan was to eventually become an industrial designer and be a professional singer on a part-time basis.

If you would make a playlist of Flu’s influences, who would we find there?
Flu: Stevie Wonder, Marvin Gaye, Earth, Wind & Fire, Bill Withers, James Brown, Prince, and many other great artists whose roots came from these legends.

How do you go about your creative process?
Dieter: We haven’t had the luxury of sitting down together and writing tunes from scratch yet. Since we started as a thesis band, I just wrote as [many] demos as I could and had everyone choose three songs that we could work on ‘cause we were kinda pressed for time. Then after thesis, we were able to team up with Funky Records almost right away and start recording our album. So we went back to the demos and came up with a few newer ones along the way. We look forward to the day we can all write a whole song together from scratch.

Were all of you big fans of funk already back then? Or was this something you all decided to explore together?
John Rae: Growing up, I was leaning more on the noisier side. Although, I’ve already been hearing “tito music” since my dad listens to it, but I didn’t mind it. Little did I know, I would end up appreciating it (songwriting, arrangement, technicalities), and later on, playing the latter genre with the band.
Randall: I can’t really tell if I’m a fan of funk but I grew up listening to different types of music mostly because of my dad’s CDs and old cassette tapes. I didn’t know “genres” back then and I’d just listen to whatever feels good.
Luigi: Not necessarily funk, but I was already influenced by old music because of my dad’s music taste when I was growing up.
Dieter: I picked up the bass ‘cause of the funk haha.
Deus: I think all of us were fans of good music but my appreciation of funk music was limited to a few known artists like of Michael Jackson, Prince, The Jackson, Earth, Wind & Fire or Red Hot Chili Peppers. I would say that my appreciation for it intensified because of the influence of my bandmates who I think were really into it.

How does the quarantine affect your productivity and creativity right now?
Flu: Well it paused the progress of our album. But that’s okay because we’re able to do online episodes of our songs and some covers. It kinda sucks not having live gigs but the production process of online content isn’t so bad either. So we consider ourselves lucky that we can still continue Flu amid the pandemic.

If you could describe your band’s personality in movies, which would you pick?
Luigi: “Roll Bounce.”
Randall: “Get On Up.”
Dieter: “Guardians of the Galaxy.”
Deus: “The Usual Suspects.”
John Rae: “The Hangover 9.”

Are there new things you’ve learned or discovered from the time you’ve spent with the band?
John Rae: When it comes to music technicalities, we mostly learned it from college. But being together as a band, we’ve learned how to blend with each other’s core sound, and how one member complements the other member’s “karakas.”
Luigi: Yes, lots of new things, mostly having a camera focused on me instead of a crowd and learning how to edit because of an unexpected number of online content during the lockdown period.
Deus: There are a lot of things I learned from our band, but the most important one was the need to constantly work on craft to push the quality of our music.
Randall: I learned a lot from the group. From songwriting, production, arrangements, and also some music business.
Dieter: I usually initiate or start things with the band so a lot of times my parts are created first. But I learned to leave enough space for everyone to contribute and make the song mature further. I also got to listen to a lot of great music recommendations from them.

I know that events are pretty bleak right now, but we can always hope for the better. What are your post-quarantine wishes for the band?
Flu: Number one wish is that we don’t lose anyone, haha. We had a bad record during our studio days where someone gets sick almost every week. Joking aside, it’s probably to finish the album and have a beer together. We have a few competitions within the band as well like darts, mini golf and basketball. So that’s kinda fun too. But we’ll figure out what to do when this is all done.

What’s a “Fine Day” for you?
Luigi: Beer, beach, sashimi
Dieter: Probably waking up to no alarms and sleeping anytime I want.
Randall: Coffee at 3 p.m.
John Rae: Thinking of what to do when you have nothing to do.
Deus: Listening to Tamia’s “Officially Missing You” and playing Sims while drinking hot Swiss Miss with marshmallows on a rainy day.

Yolanda Moon’s first track of 2019 is a heavy one. Released last Friday,...