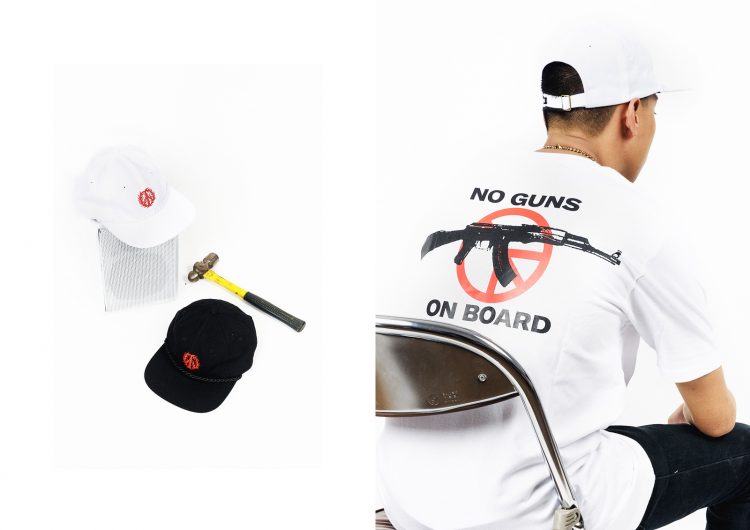 Revere’s “War Against” collection calls attention to the eye for its striking graphics and straightforward imagery. The juxtaposition of elements (the Grim Reaper bracketed by the phrase “To Serve And Protect,” an automatic rifle laid over the peace sign) makes the collection have intentions that are easy to understand and the intentions clearer than most.  War against self. War against violence. War against peace.

If you notice, a lot of the pieces are a reference to film and TV crime characters. French shares that somehow, these characters reflected the illustrations they were named after. “They did not inspire the collection, but when I see the designs, I get reminded of these characters.”

Revere brought in several designers to complete their newest collection entitled “War Against,” released during their recent 4-venue tour. The collection features a Ralph Espiritu designed cap in Black and white colorway, same illustration for their Cult shirt in Red and Black, the Murphy in Yellow and Black still by Ralph Espiritu, The Gustavo in Black and white and Montana illustrated by Cebu based Nikko Cabatas and a canvas Tote bag by Cebu-based Street artist, Soika.

The first part of the trip was at Pursuit Fair last June 16 at Century City Mall, followed by former Cubao Expo neighbor The Twelfth House on the 19th for the Cubao release. The final stage in Manila was at Black Market simultaneous to their collaboration with Bad Decisions Wednesday. Finally, bringing the collection home to Davao City last June 22 at Suazo Bar.

The central concept was to express the relationship between peace and violence and the toxicity of both within one’s self.

French Andico, Revere’s Creative Director shares that it took months to complete the collection, with most of the time spent on piecing together which illustrations to include. The central concept was to express the relationship between peace and violence and the toxicity of both within one’s self. Peace and violence, in a way, holds power; good or bad. Hence, individually we must acknowledge our role; to choose to preserve peace or act in violence.

Is this a collection a reflection on the “signs of the times?” We bet yes.

Playing the first franchise of episodic adventure game Life Is Strange was quite...