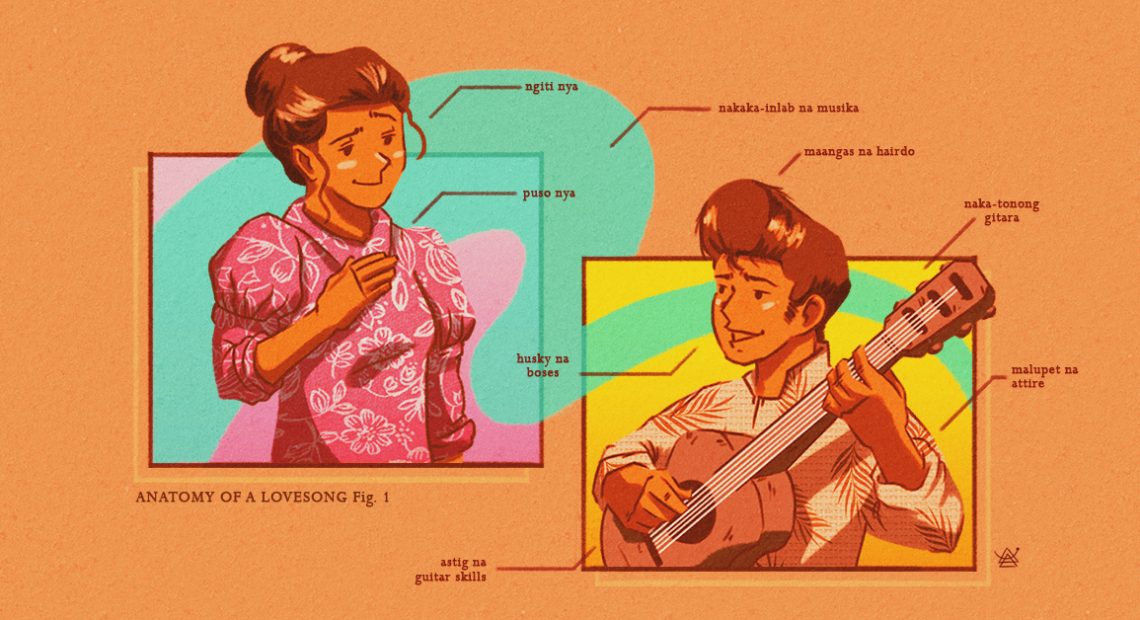 The opening lines of the Parokya ni Edgar song betrays where the serenade stands in the modern age. The harana seems silly, outdated. Gimmicky, even. “Sino ba ’tong mukhang gago?” frontman Chito Miranda sings, and one could already imagine a scene playing out: A nerve-wracked man looking up at an expectant Maria Clara-type woman, occasionally fidgeting with his ill-fitting barong Tagalog as his singing echoes through an empty street, his voice full of heartfelt sincerity, if quite off-key.

Filipinos are so enamored with expressions of love that we see traces of our romantic nature peppered throughout our culture. Manifestations like the harana are straightforward, but romance is also found in the minutia of our vocabulary, with words like “torpe” or “kilig”—feelings that have no equivalent in the English language but are so commonplace they are seared into our collective consciousness and experiences. Our predilection for romance spills out far beyond the confines of Tagalog and into the hundreds of local dialects and languages. “Pag-irog” is pamalsinta in Pampanga, gugma in Cebu, amor in Zamboanga, pagkamoot in Bicol, and chadaw in Batanes. Even though geography separates us, love still is our common denominator.

So what makes a certain love song a lightning rod for a generation’s zeitgeist?

The kundiman was a cultural phenomenon that encapsulated the infatuation people felt back then—the kind of love that was grand and sweeping, one that moved you to tears. “Kung sakali ma’t salat / sa yama’t pangarap / may isang sumpang wagas / ang aking paglingap,” sang Sylvia la Torre in a 1952 rendition of “Pakiusap.” It is a desperate, pleading song about a person’s willingness to throw entire lifetimes away for the chance of holding the hand of their beloved. “Pakiusap ko sa’yo / kaawaan mo ako.” The music swells with violins as the singer climbs to a powerful B flat. It feels almost theatrical, like an opera singer cueing the red velvet curtains to close and the applause to ring it out. It’s a slow and painfully doting submission to love, brimming with a do-or-die energy.

Following this was the iconic era of Manila Sound that planted the fundamental roots of Filipino pop as we now know it. It was pioneered by the likes of Ryan Cayabyab and Rey Valera, and was dominated by a more down-to-earth and progressively playful approach to romance. Archaic Tagalog words gave way to more casual slang, and pop culture references found a niche within the traditionalist form of ballads.

Rey Valera’s “Ako si Superman” is a rising proclamation of devotion. He feels almost superhuman, he sings, when he is with his love. Its recognizable hook is kept in time with a hi-hat against its 4/4 beat, while harmonies patterned after American Motown influences nestled in Valera’s vocals. Cinderella’s “T.L. Ako Sa’yo.” features colloquial abbreviations such “T.L.,” which stands for “true love.” The record’s standout element is Cinderella’s airy vocals that elicit a gentle wistfulness—a complete 180-degree turn from the heavy, operatic singing style that prevailed in the previous era of kundiman.

The era of Manila Sound was a catalyst for experimentation with foreign styles and novelty subjects. In turn, it also became the breeding ground of formulaic songwriting. In an interview with The Guidon, APO Hiking Society’s Jim Paredes talked about the strong influence of American music: “Everybody wanted to be called ‘The Elvis of the Philippines,’ because [it was easy to] sound like Elvis,” he said. The members of Manila Sound seem to have figured out the secret sauce, because their songwriting worked—and with tremendous success. Bands like APO Hiking Society and Hotdog went on to become a mainstay in the OPM hall of fame, and their creations comprised the roster of classics in Filipino music.

Today, the key to a hit love song isn’t the same as an Elvis Presley hit. We’re living in entirely different contexts, and we can choose what to make out of the experiences we have. This freedom, brought about by increasingly accessible tools and a boundless amount of inspiration, keeps birthing new pockets in genre faster than we can label them. The internet age brings with it an infinite landscape of music, the post-somethings of the love song formulas that can before it.

If we throw the formulas of the past out the window, what, then, makes the love songs of today tick?

To dissect and deconstruct the anatomy of a modern love song is to understand its songwriter, which might be why we’re so drawn to understand their stories.

The musicians who might know the answer are the music artisans of today—the ones who understand that achieving longevity will require a more thoughtful approach in the new-age renaissance of the love song. “Mastery is important,” says Armi Millare. The UDD frontwoman, arguably on top of the list where contemporary pop is concerned, has penned songs for the lovelorn (“Oo,” “Sana,” “Tadhana”), and UDD’s singles continue to find their way to listeners’ playlists for more than a decade already—no small feat, given that tons upon tons of new content is fed to the 21st century audience. “If we get that stuff right, then one song could pretty much define the zeitgeist of a generation, and that’s a great contribution to society that nobody can take away from a craftsman,” she says.

Contemporary pop love songs are given more space to be fluid, and so the writer is allowed to be. In this age, rules are just a guideline. “I spend more time in refining the form and arrangement. Structure is always a challenge for me,” says Coeli. Maybe that’s why her music works. She, as a writer, may wrestle with a certain mold, but it continues to come out unbridled and unapologetically her.

“My emotions are amplified a hundred times within myself. There’s always a need for me to let it out.

UDD’s writing style often steps out of the familiar Manila Sound formulation as well, and so it’s interesting to note how their music is so well-received in the mainstream. “Paalis at pabalik / May baong yakap at suklian ng halik / Magpapaalam at magsisisi / Habang papiglas ka ako sa‘yo ay tatabi,” goes their 2006 song “Indak.” Its lyrics flow continuously, breaking free from the verse-chorus alternation that fits the mold of a garden-variety pop song. Sonically, the song registers like a push and pull, much like its narrative. The instrumental’s rhythm is almost tangible, the ebb and flow urging its listener to move in sync with its palpable inertia. It feels almost as if UDD writes from their own world, but instead of abandoning their songs’ intricacies for simpler tunes, people follow suit like orbits.

UDD is one of the music groups that sounded the foghorn for a new pop landscape. As they had shown, there was no more need to pander to factory-like standards to gain a following. In turn, one could also assume that it is the listeners who have evolved to be more accepting of something that’s a little different.

Different, in contrast to the two extremes of the dramatics of kundiman and the gimmicks of Manila Sound, can be something as simple as sincerity—but at a gut-wrenching level, of course. Diary-confessional songwriting first found its audience with the mainstream in the 2000s. In its first decade, the pop charts of local music channel Myx was saturated with records from the likes of Kitchie Nadal and Hale. Looking back at songs like “Same Ground” and “The Day You Said Good Night,” the given structure of a pop song was there, but the words carried with it a severe dose of heartache.

“The most difficult songs to write about are situations I cannot personally relate to, or songs I can relate to too much.”

This transparent vulnerability has carried onto current music. “My music is raw and honest,” says Coeli when asked to describe her sound. “My emotions are amplified a hundred times within myself. There’s always a need for me to let it out.” This kind of soul-baring seems to mark the recent crop of indie folk acts: Ethereal yet intimate, but never abrasive—like a fresh, green pocket of humanity that is protected from, or maybe stays curiously naive about, the harsher realities in the world.

Argee Guerrero, the mind behind solo folk project I Belong To The Zoo, has himself reached sincerity to a breaking point. “It was hard for me to finish the songs because I ended up breaking down during the songwriting and the recording for the demos,” he says about his experience writing “Pity Party” and “Before You.” “I just find it exhausting sometimes because of my emotions,” says Coeli. Vulnerability seems to be a price paid by today’s songwriters.

It’s a delicate balance to strike, honesty and impersonality. Armi says, “The most difficult songs to write about are situations I cannot personally relate to, or songs I can relate to too much.” Honed by years of experience, she has the skill of a veteran.

Younger songwriters like Coeli are still on their way to acquiring this. “I’m currently learning to know when to step into [being in touch with my emotions] and when to step out. It’s not healthy to always be out of control.” Argee’s tactic is to detach his lyrics from particular details. “The hardest part about songwriting,” he muses, “is trying to hide certain specifics [like street names, locations, etc.] so as not to disclose whom I’m writing about.”

Sincerity, to the point of pushing personal boundaries, reveals itself as the common thread. Anything less than the god-honest truth can evidently be sniffed out. “’Yung ibang mga ‘hugot’ parang wala namang pinaghuhugutan,” observes Shirebound and Busking’s Iego Tan, who writes the way a poet would write a confessional in his journal. Iego’s music banks on the power of its words, in true poetic fashion. “Alamat lang ba ang pahinga ng dalawang puyat sa / Pira-pirasong mga bugtong, nagtatanong / Sagot ay ’di mahalaga / sapat na sa ’king nariyan ka.” The melody cradles each verse as Iego performs the song with the help of a lone piano. “Paumanhin, paumanhin, salat sa kasanayang linawin.” The lyrics sound almost like a secret whispered to a lover under the sheets, and yet here it is, out in the open for all to hear. And we eat it all up.

To dissect and deconstruct the anatomy of a modern love song is to understand its songwriter, which might be why we’re so drawn to understand their stories.

Maybe in a climate where the truth is so often sanitized, selectively presented through filters and screens, we crave sincerity. Technology can be so devoid of soul at times. These screens feel cold to the touch, and so we long for a raw piece of humanity. To dissect and deconstruct the anatomy of a modern love song is to understand its songwriter, which might be why we’re so drawn to understand their stories.

It is an elusive authenticity, one that allows us to navigate our own internal turmoil. No wonder then, that while we clutch closely our unsorted feelings, we willingly sway to these songs in time.

By Mica Magsanoc Grammy-winning musician, St. Vincent a.k.a. Annie Clark, will be directing...