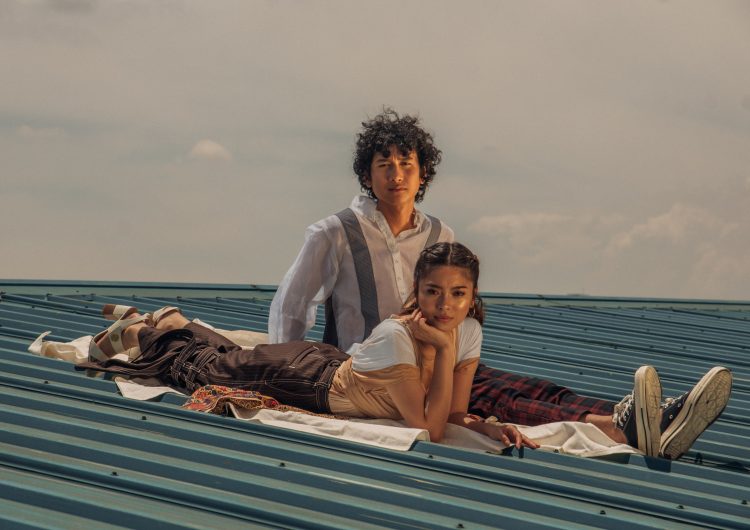 At 12 in the afternoon on an offensively hot summer day, Jigo Viriña and Mariamaria found themselves dolled up and sweating on a Makati building rooftop. The mood for the shoot was to look nonchalant, graceful, blissfully unaware of the near 40-degree temperature assaulting everyone’s skin⁠—and they were pulling it off. A casual rooftop picnic on searing galvanized steel. What the camera didn’t catch was the pooling perspiration on the backs of Jigo and Mariamaria’s ecru tops. “Next layout?” we called out. They raised their thumbs with a smile and marched towards the glam team. You wouldn’t have caught them complaining. 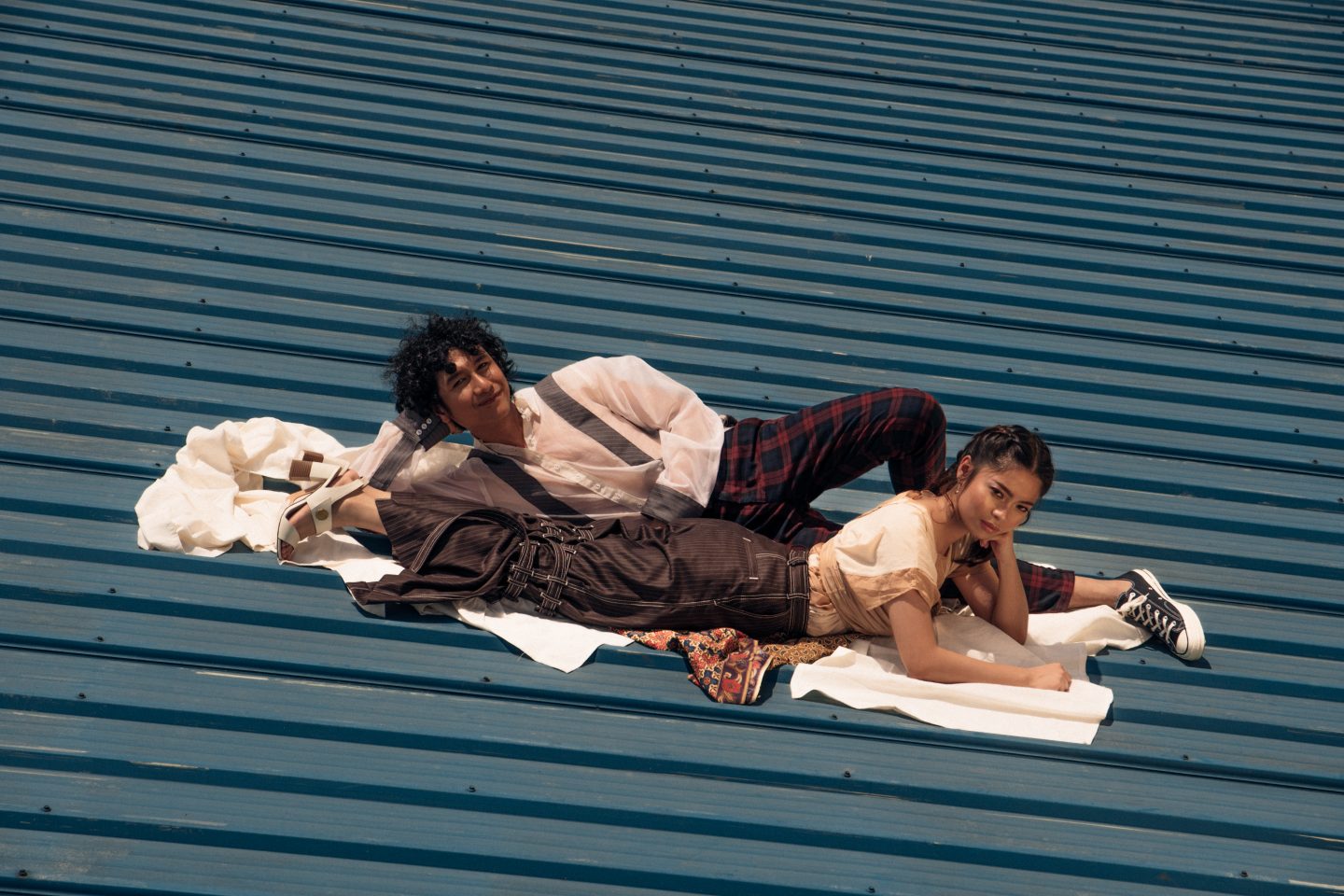 Resilience is one of the first things that came to mind when I met Jigo Viriña. The 24-year-old musician arrived 20 minutes earlier than the call time, telling us about his travel from QC to our office in Makati⁠—always a grueling task, what with the atrocity that is Metro Manila traffic.

I became convinced he had the characteristic when I learned about the background of his first EP, Goody Vibes. The record was made to help out his father, who suffered a stroke. Goody Vibes was created with the intention of letting people know that positivity is what can get people through tough times, and it’s what helped Jigo and his family get through the ordeal. Jigo sings about empathy and optimism in the face of bleak situations. It must be why he managed to smile through the two-hour travel time, or pose on a hot roof later on. 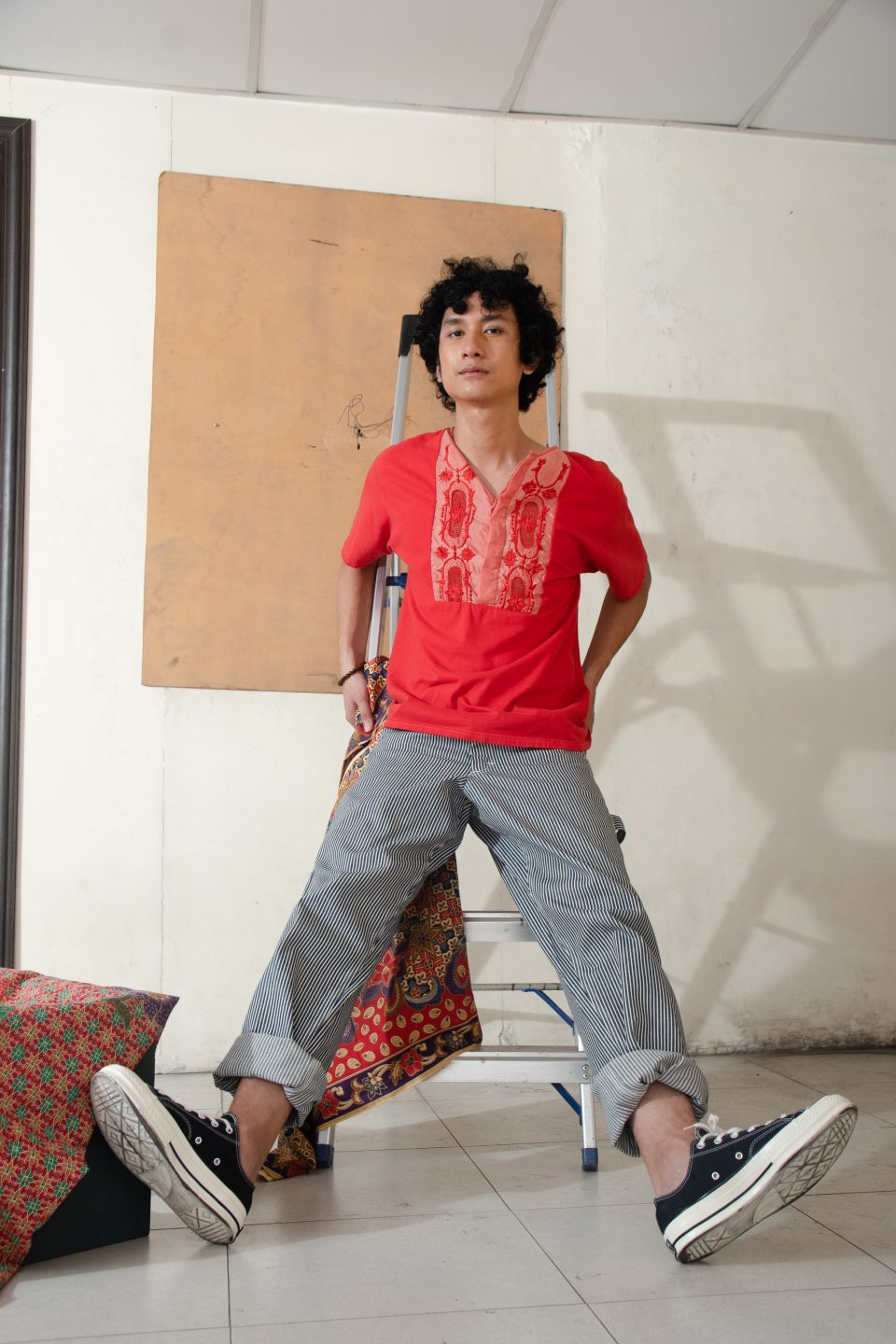 A cup of barako later, Jigo then announced the arrival of Mariamaria. A dainty brunette appeared from behind the door, and after friendly greetings with the team, she and Jigo launched into a lively conversation of catch-up. Did they not see each other often? I wondered how their dynamic worked.

Teresa Maria Melo is Teta to her friends, Tetaturtle to Jigo, and Mariamaria to her listeners. She sings about sad experiences, like getting ghosted, or, like in “Figure It Out,” a blooming romance that was squashed because of uncertainty. When I asked her why she wrote about these topics, she said it’s an opportunity to make the memory a little happier. 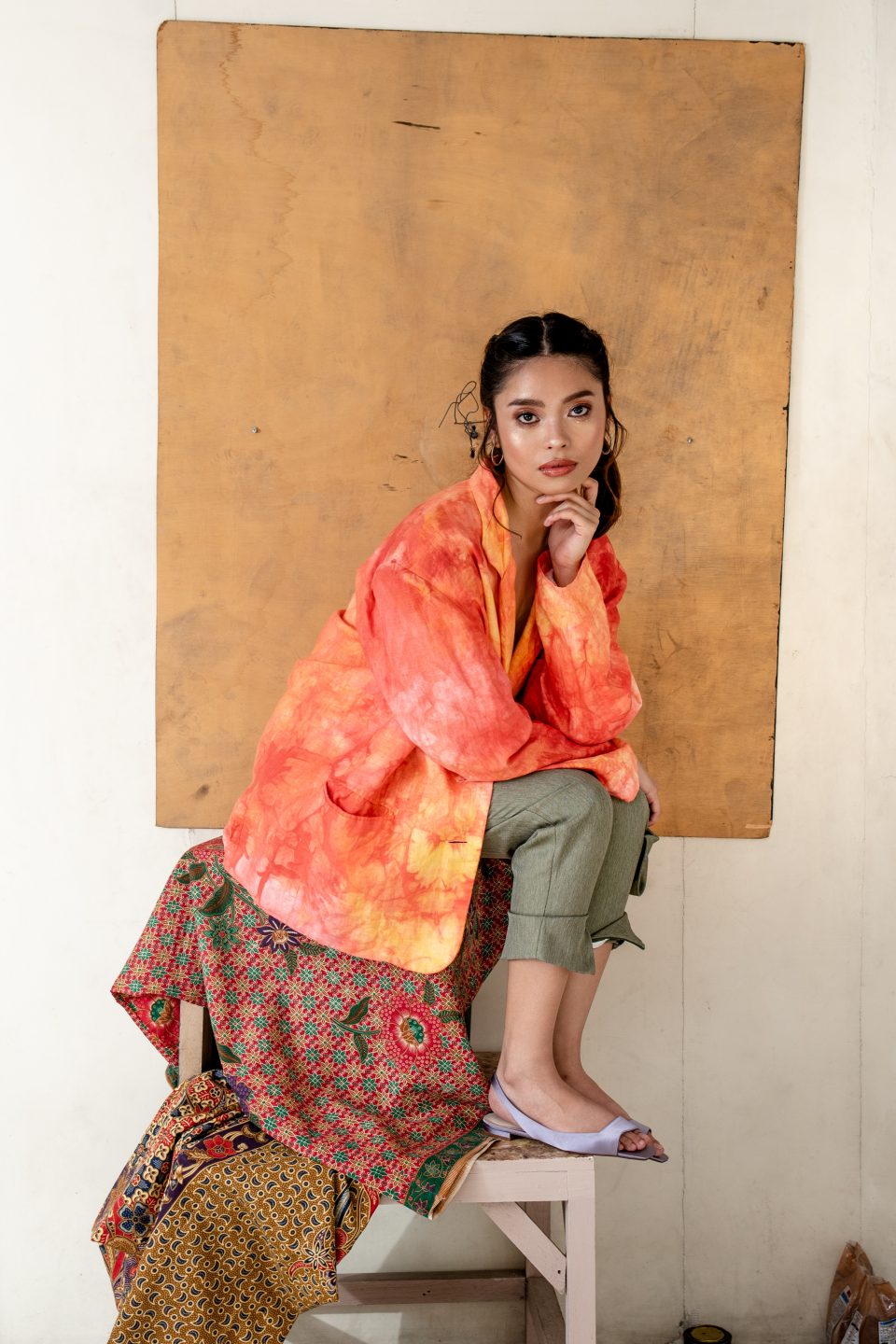 When the two operate as a duo, the music has an infectious energy that can make even the most stoic person tap their foot. Bright and bold synths intertwine with Jigo and Mariamaria’s suave, buttery harmonies. To paint a picture, think of warm sunset oranges and pinks tinting the sky on a breezy ocean shore.

Happy. Water. Colorful. Those are Jigo’s answers when I asked him what words would describe their music. I’d say that the words are spot on. Songs like their first ever collab track “We Used To” are best enjoyed on a beach at sunset, with a cold beer in hand. They’re also best enjoyed when you’re someone trying to make the most of a bad situation. Jigo and Mariamaria, two twenty somethings who are at the starting line of navigating their art, career, and lives in general, know the power of a good dance-cry song. 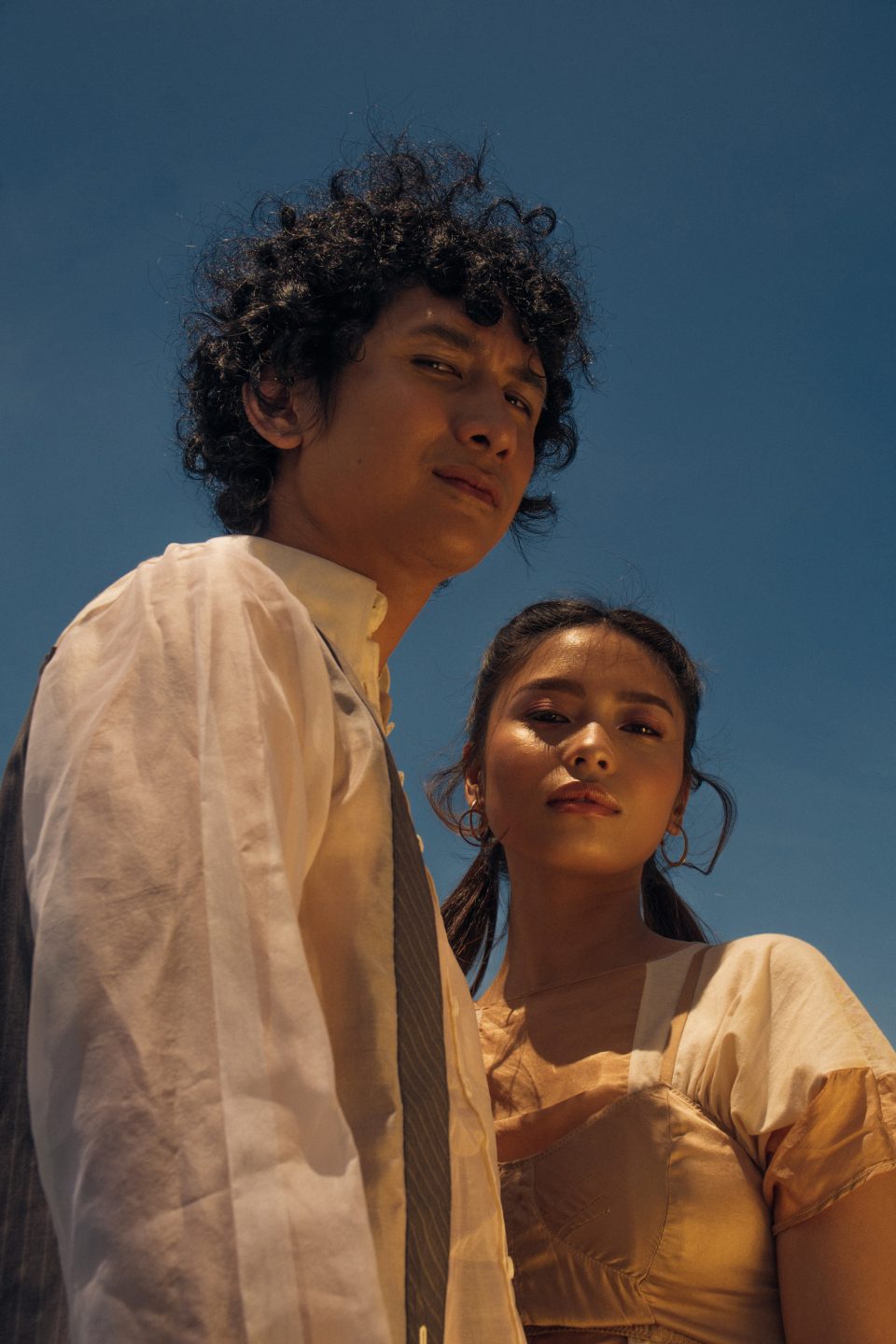 ON JIGO: top from STEPH VERANO; On Mariamaria: Dress and bralette from EAIRTH (available in TROPA)

We sat down with Jigo and Mariamaria to have a conversation about being new in the music scene, the pressures of the Internet age, and figuring out life. No tears involved, of course. Only good vibes.

Before anything else, we’re curious. Your real name is Teta, so where does Mariamaria come from?

M: I really didn’t wanna use my real name, kumbaga. Kasi, wala lang, para maiba lang. So my second name’s Maria, and that’s where my mom, my sister and I thought of Mariamaria.

How did you guys know about each other’s music?

M: I used to post on Soundcloud, and Jigo, who’s also a singer-songwriter extravaganza extraordinaire (laughs), he messaged me and asked me to collab.

J: Actually, it was pretty funny. I think it was like a few years back?

J: Yeah, kasi her sister would share with me her music before.

When did you guys start collaborating?

M: I think it was last year. We first collaborated on “We Used To,” the first single on Spotify that we released as a team.

Do you have a favorite track that the both of you worked on?

J: Hmm. That’s hard. (laughs) Well, “We Used To” was the first track, and I kinda like it. It’s like the starting point of everything.

M: It’s very close to our hearts. (laughs) Also, because Jigo was able to put an excerpt of Audrey Hepburn’s speech at the Oscars. So cool.

How do you guys work together? Does someone do the lyrics while someone does the melody, or is everything collaborative?

J: It’s both. Well, ‘cause for “We Used To”,  I laid down the tracks, the melodies. Teta wrote the lyrics first, and then something clicked. And our future songs, she has input din on the melody and producing too.

So when you guys write, minsan you don’t see each other? 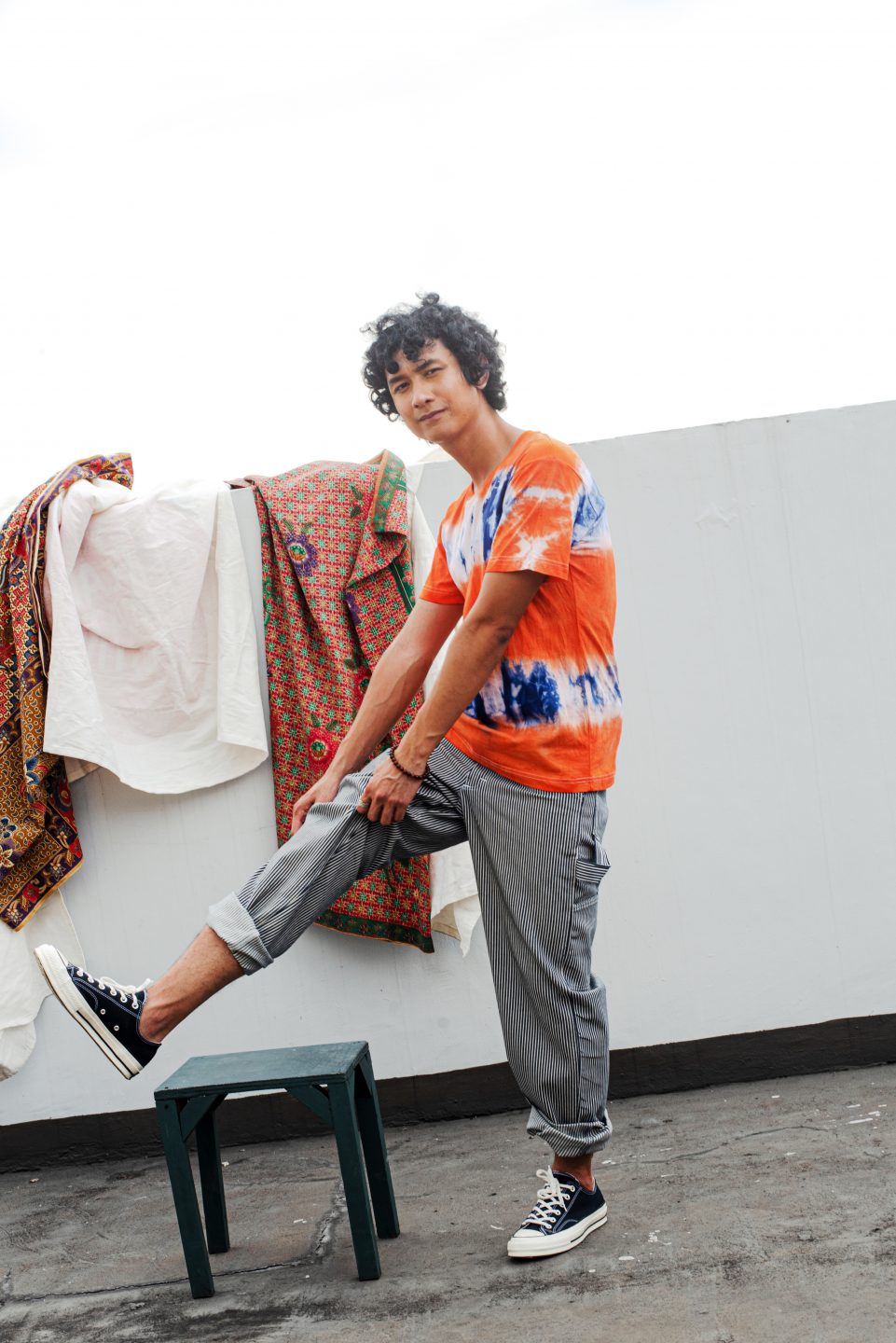 How do you go about your creative process?

J: I do exercises. At least once a week, I have to come up with something. But what we end up doing is parang something on the fly. It’s just like an exercise that may or may not affect what we make in the future. It’s like on the spot.

M: Usually, I get inspiration for my songs from my friends. My life’s pretty… pretty normal. (laughs) So my friends’ stories, I empathize with their emotions and what happened to them, so I get to write about their stories.

Do you guys have a dream collaboration?

M: SZA! SZA is so… she’s a goddess. I heard she has hard drives with unreleased songs. Someone should steal it and publish it. (laughs)

J: Tom Misch or Jordan Rakei. Those dudes. If local, Reese [Lansangan]. She’s a family friend, but we don’t see each other that much. Please collab with me [Reese]. (laughs)

M: For sure, SZA would be number one. SZA, Jorja Smith, Billie Eilish, and I really like Chance [The Rapper] because he’s so happy. You feel uplifted while he performs.

J: Well, Tom Misch for one. And Dr. Dre. I love his way of producing. And Kanye. Oh! And Kendrick Lamar.

What’s the hard part about being new musicians in the local scene?

J: Well in the music scene, there’s the established acts. They’re people who are always in the lineup, they have spots in the scene na. The struggle siguro is bringing in your own thing. It’s good that sometimes you get to perform with these acts, it’s great. But eventually, in your own time and pace, you have to find your own niche. The scene has to recognize you for who you are and what your music is. Sometimes when you make music, people will say oh, you sound like so and so. Eventually, you have to make your own name for yourself.

M: Medyo sabaw lang, but the transpo part. (laughs) Getting a taxi or booking a car is so expensive. When you have to subtract the transpo [costs] from the talent fee, kung to and fro, halos wala nang matitira.

Aw, I feel the struggle. But what about your favorite thing about it?

J: You get new grounds for creativity. At least you’ve heard the music of now, and you can see what you can do that’s different. There’s more space for experimentation. Also new ways to tell your story.

M: I think it’s when you find out that people you don’t know listen to your music. It’s very uplifting. You get inspired to write more songs kasi they got to know you through your music, so that’s something. 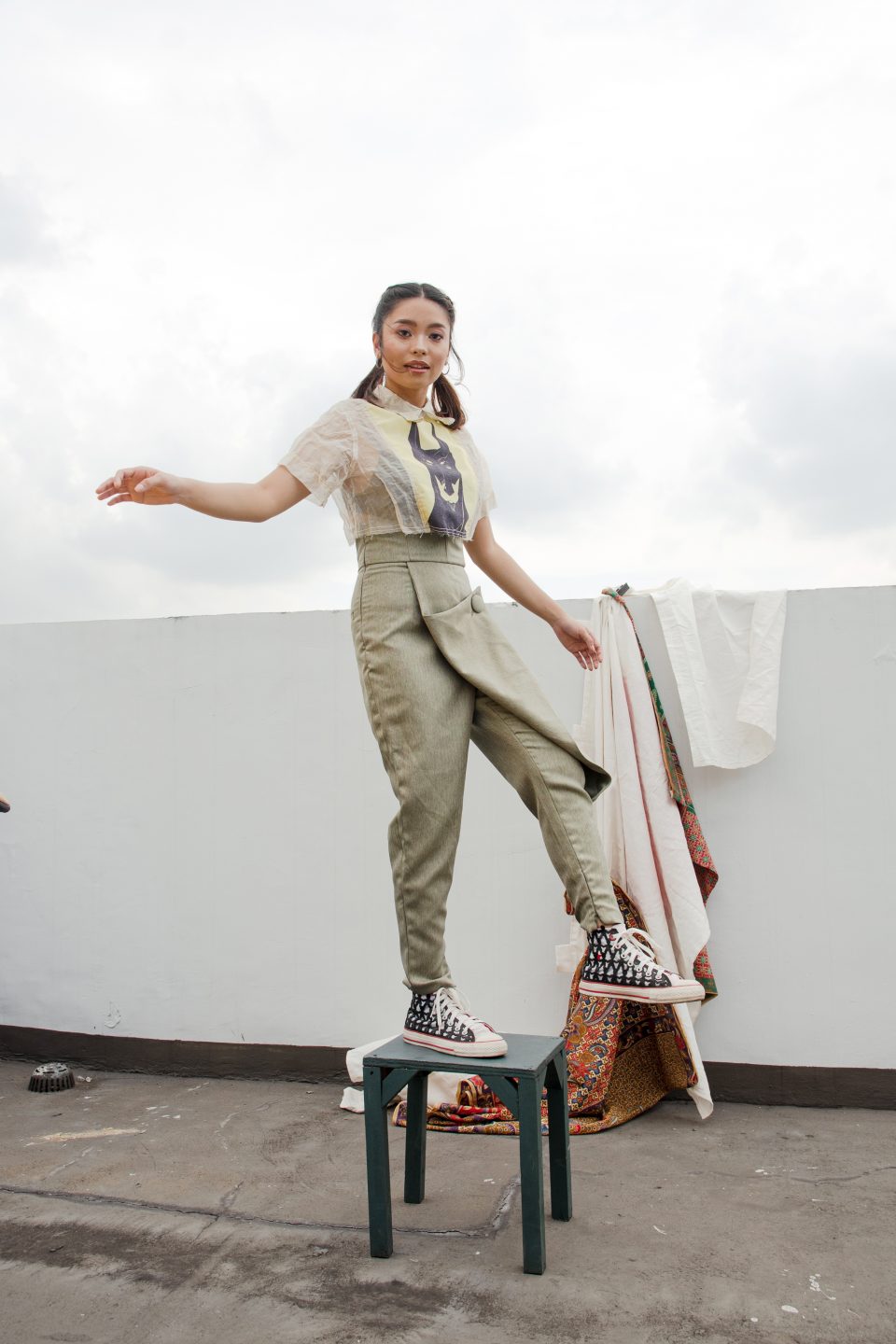 Top and bottom from STEPH VERANO, shoes are Mariamaria’s own

Do you try to project a certain image when you make your music, then? Or are you the kind that puts your heart on your sleeve?

M: I’d say I’m kind of like an onion. (laughs) My songs now are just one side of me, but there are more things I’d like to share.

Is it kind of like a therapeutic experience for you?

M: Yeah, because I get to make slightly sad experiences more happy.

Nowadays, sharing your art is so easy with the Internet. We’ve also been seeing a lot of underground talent sprouting from it. What is it like to be creatives in the internet age?

J: Well for me there’s the feeling of, yeah, there’s so many talented people out there. I felt kind of insecure at first. Later on, I realized that music is more therapeutic talaga. You do it because you really love it. That drives me more than the competition.

M: I think, generally, there’s a lot of talent to share. I don’t think we or the world would be tired of seeing more and more talents popping up, so I just see them as blessings. 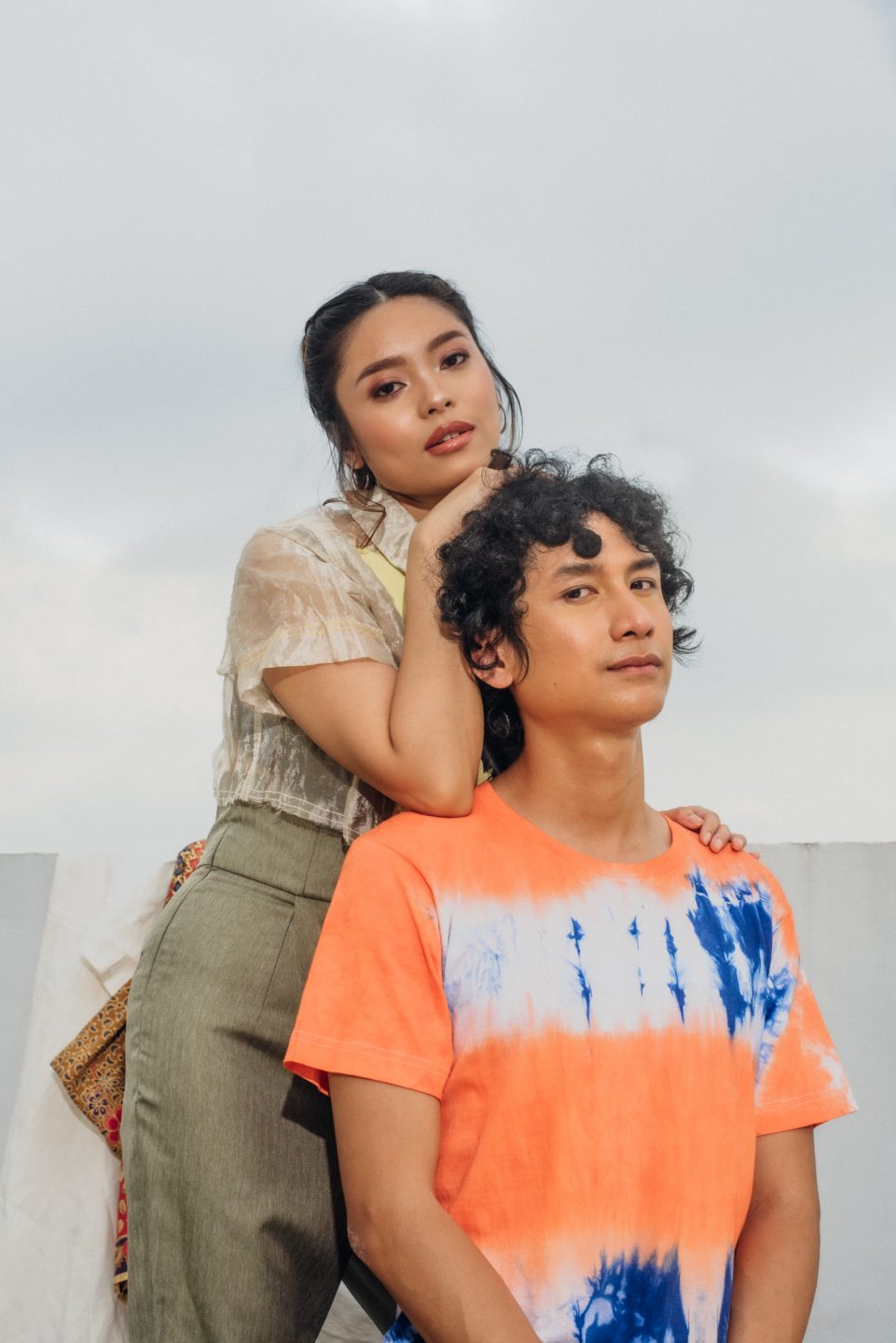 ON TETA: top and bottom from STEPH VERANO; ON JIGO: top from TIEDIET

Speaking of talent, now we’d love to hear your new collab EP soon! Any word on a date?

Can you clue us in about the vibe of your upcoming EP?

M: The July or August EP will actually be a Mariamaria EP. But Jigo’s producing the tracks, so it’s kind of like Jigo and Mariamaria. The vibe is kind of… self-reflective. When I would think of the songs, I would just think of them on a bus going home. And I’d just be writing songs on my phone or on my notes, just thinking about what happened. The overall message is about keeping good relationships, friendships, and knowing when a relationship isn’t good for you.

Lastly, we just want to know if you have any advice for fellow young musicians.

M: I think that was me before. (laughs) I didn’t have all the fancy software. My advice for young people would be that they should work with what they have. Working with what you have will get you somewhere. Because you’re familiar with the things you know already, so for me it was Garageband. It worked well for me.

J: Same, work with what you have. And don’t compare yourself. Because whatever your output is, or your creativity is, that’s your work. So yeah, just keep working with it. And even if you don’t have the fancy software or the fancy tools, they’re just tools. You can still make your songs without them.

Listen to their single “Nothing to Fear” here:

I first discovered Lady Gaga on the cusp of adolescence in 2008. Back...

College life is undeniably the best years of our lives. This is the...