Filipino music’s current landscape is no longer a one-trick pony. In a vast array of established or upcoming singer-songwriters and four-piece bands, our sound no longer belongs to one umbrella genre like OPM. And that’s a good thing. Our hip-hop’s resurgence sprouts more cyphers than ever, singer-songwriters are modernizing our lovelorn kundimans, and electronic artists continue to push boundaries with beats and synths.

“Maybe some artists like to create to push their name sa frontline. Pero sa akin, mas prefer ko that you play for the sake of playing.”

Our lovable yet rare synth-pop artists are also making waves within their scene by making homages to the past. For young musicians like singer-songwriter Ena Mori, pop star Pikoy, and music producer Heinrich Bernabe a.k.a Headroom, their love for the ’80s till Y2K goes beyond simple fascination. Nostalgia fuels their artistry; from their songwriting process to their visual aesthetic choices. 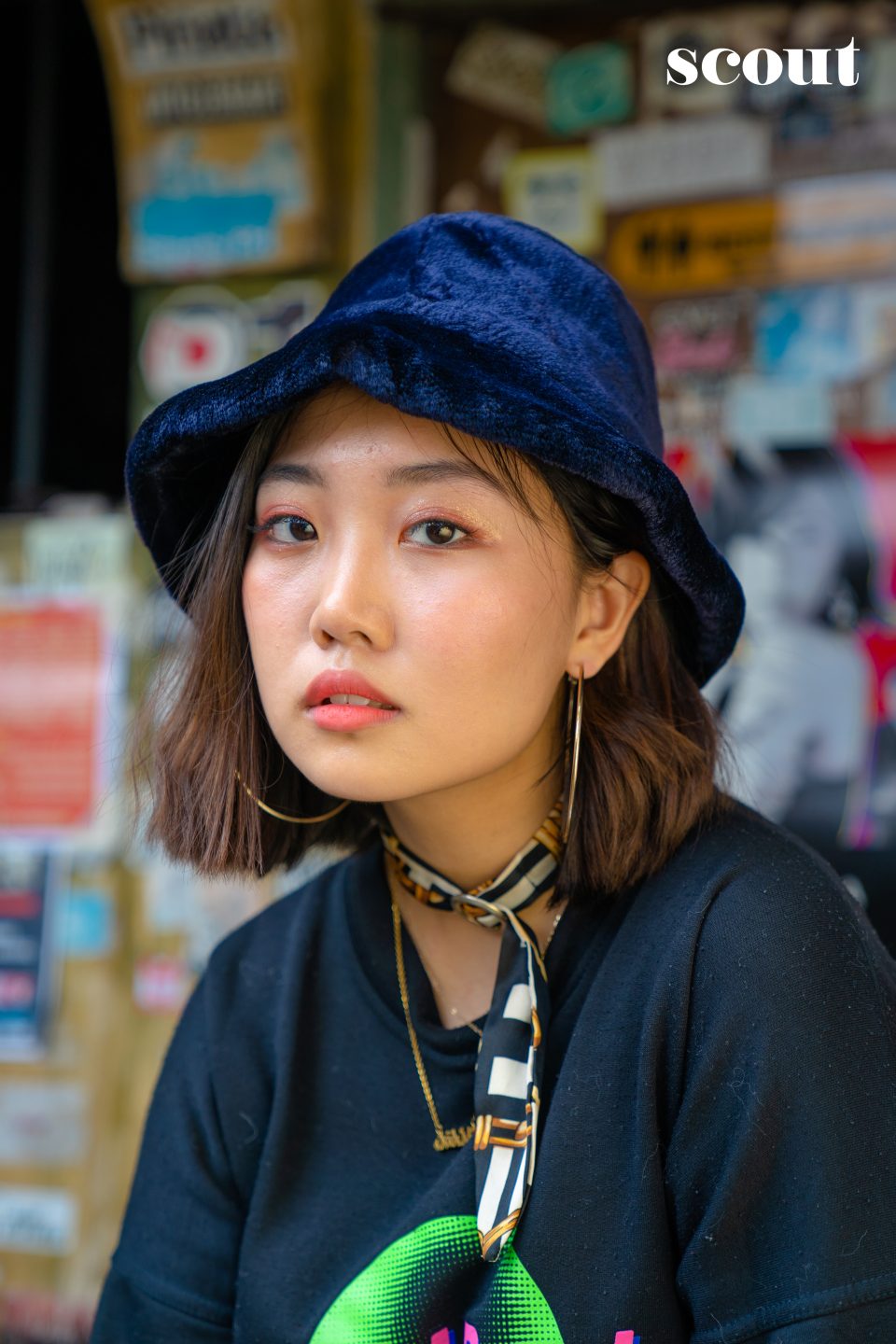 Growing up as a classical pianist, yet her music palate never stayed in Mozart’s realms. There’s her love affair with ’80s and ’90s pop from childhood road trips, her Japanese pop phase, and Hollywood soundtracks. “Everything’s mix-and-match. I think how I grew up made my sound pop-ish, kinda experimental.”

Read more: The Ravelos’ ‘Sindikato’ is our post-election rage personified
It didn’t only make her pop music experimental; it also gave birth to a nostalgic yet futuristic sound. Her songs feel like your go-tos spontaneous late-night drives, dancing in a low-key gig in Saguijo, and dealing with 2 a.m. feelings. Ena’s taking over—from gig haunts in Katipunan to the streets of Busan—and we can only be ready. 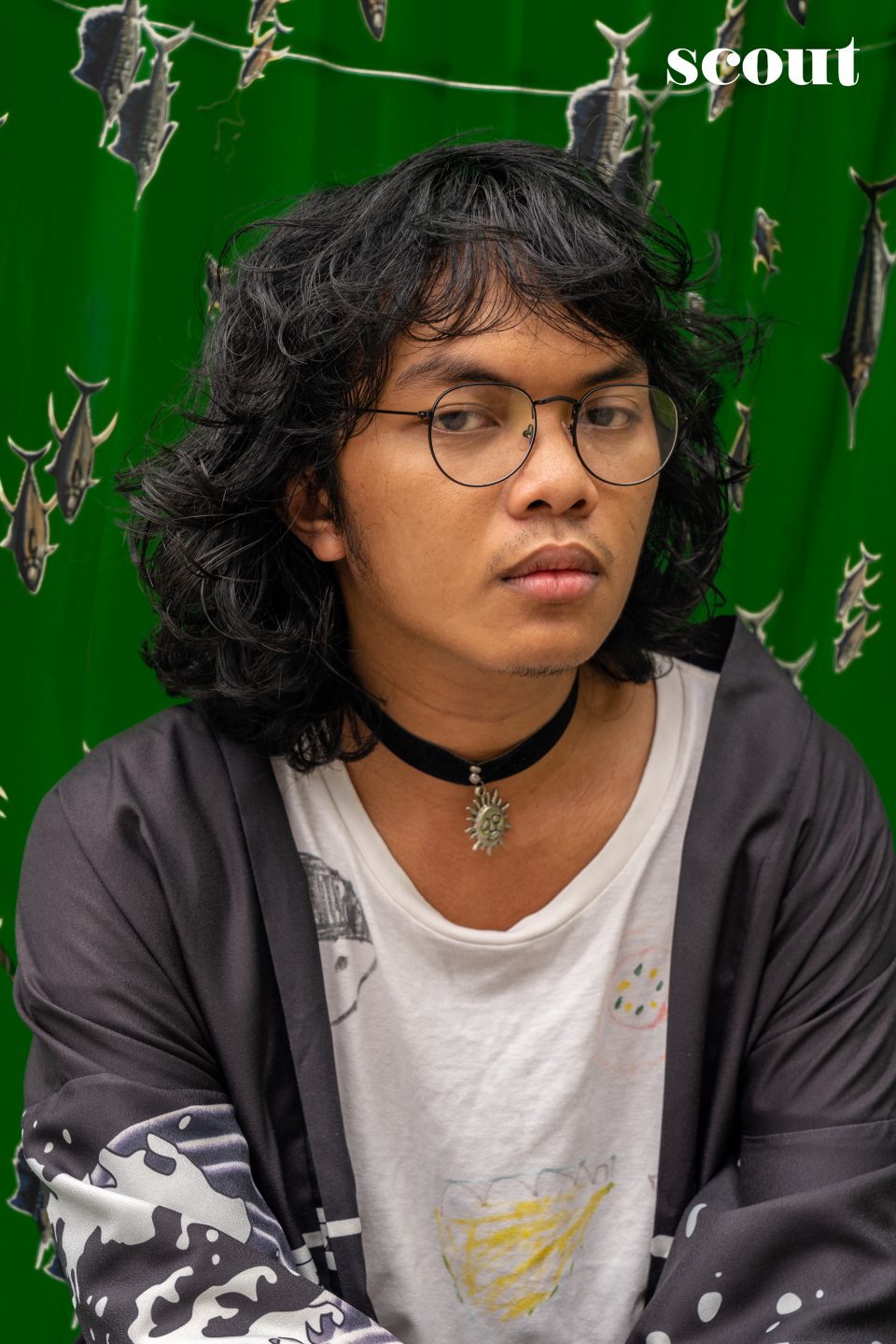 “The sound of tomorrow and the music of today” is the introduction of Daft Punk’s debut studio album Homework. It’s also the best phrase to describe this Pampanga-based music producer. Inspired by an iconic AI character back in the ’80s, Headroom became more than a stage name for him. “How do I give justice sa pangalan ko, kasi kinuha ko ’yung Headroom kay Max Headroom, ’yung pinaka-popular na meme nung ’80s? Nag-stick sa akin na I need to bring nostalgia back to life,” he says on his origin story.

He gets the authenticity of new wave bands like Depeche Mode, Human League, Joy Division, and New Order to recreate their sound as his own. Through analog hardware’s rawness and dark synths, this young producer plans to take Filipino synthwave to new heights. 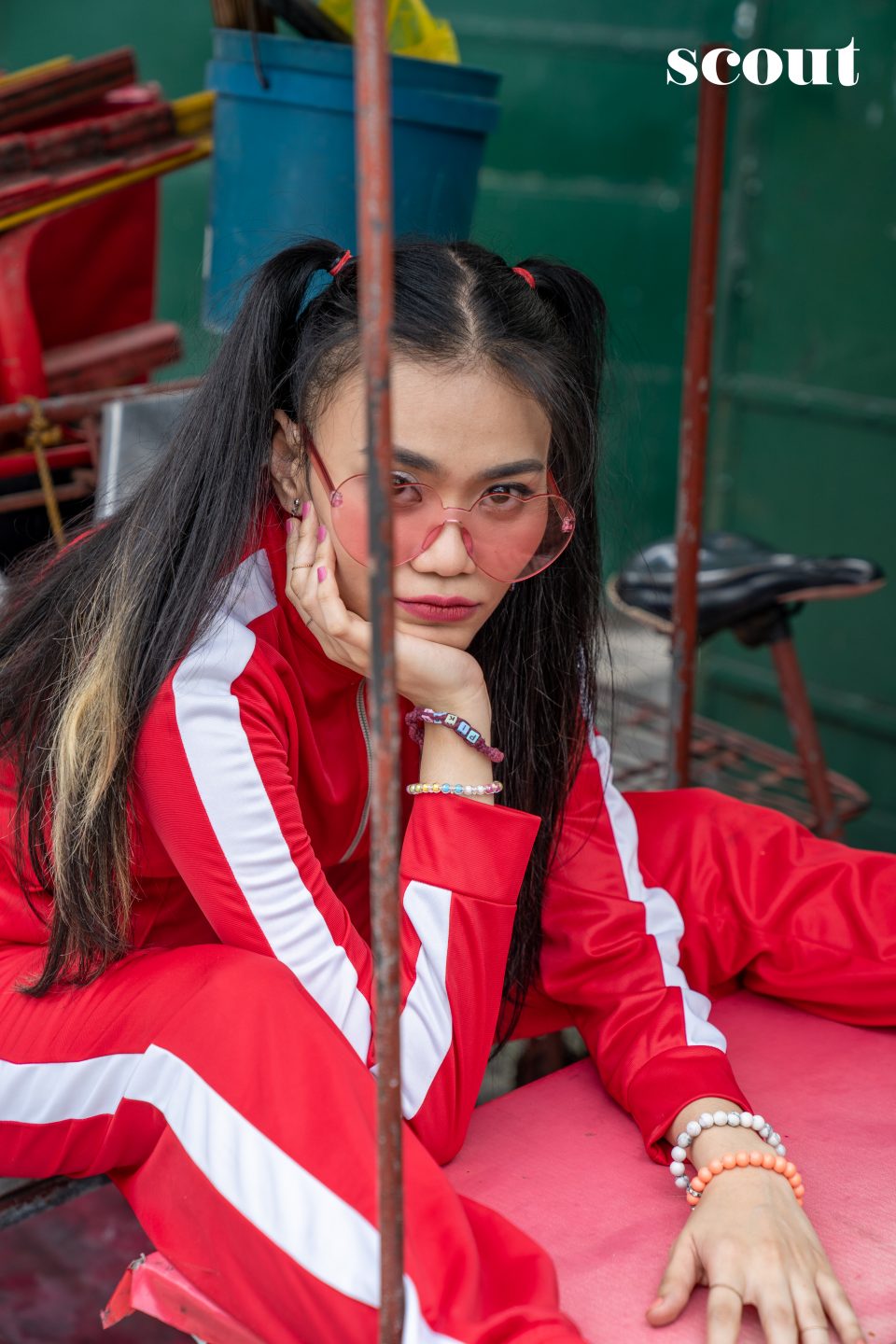 Pikoy usually describes herself as a self-produced singer/songwriter with a visual arts background. “Self-produced kasi sa music. Ako din lahat sa visuals and performance,” she explains. In a Venn diagram, she’s smack-dab in the middle of Grimes and Sheena Ringo. “Number one na idol ko ngayon si Sheena Ringo, and her band Tokyo Jihen. Sa kanya ‘rin ako na i-inspire to produce my own sound,” she tells us. While, people associate her with Western artists, she confesses Japanese pop stars are her main influence for her style and sound.

J-pop never sounds the same. Like her influence, the only thing constant about Pikoy’s sound is the way she pushes her limits every time. Her tracks never sound similar, yet they fit together when grouped in one album. She’s one of the Philippines’ best pop stars—but not everyone knows that yet.

These three met for the first time when we gathered them during one afternoon. As they hint on starting a band together (hopefully they’re serious), muse on their style preferences, and share their fear of mid-performance spiels, we get to know the faces behind Filipino synth-pop’s future and where they plan to take it.

“Nag-stick sa akin na I need to bring nostalgia back to life.”

Is there a recurring theme in your songs?
Ena: One common thing people write about is relationships. I try my best to put myself in another perspective, and I’m not always the one who’s heartbroken. I will sometimes be the heartbreaker. I try to do creative thinking, even though I’m not in that place right now, if I was in that place, what would I actually feel? 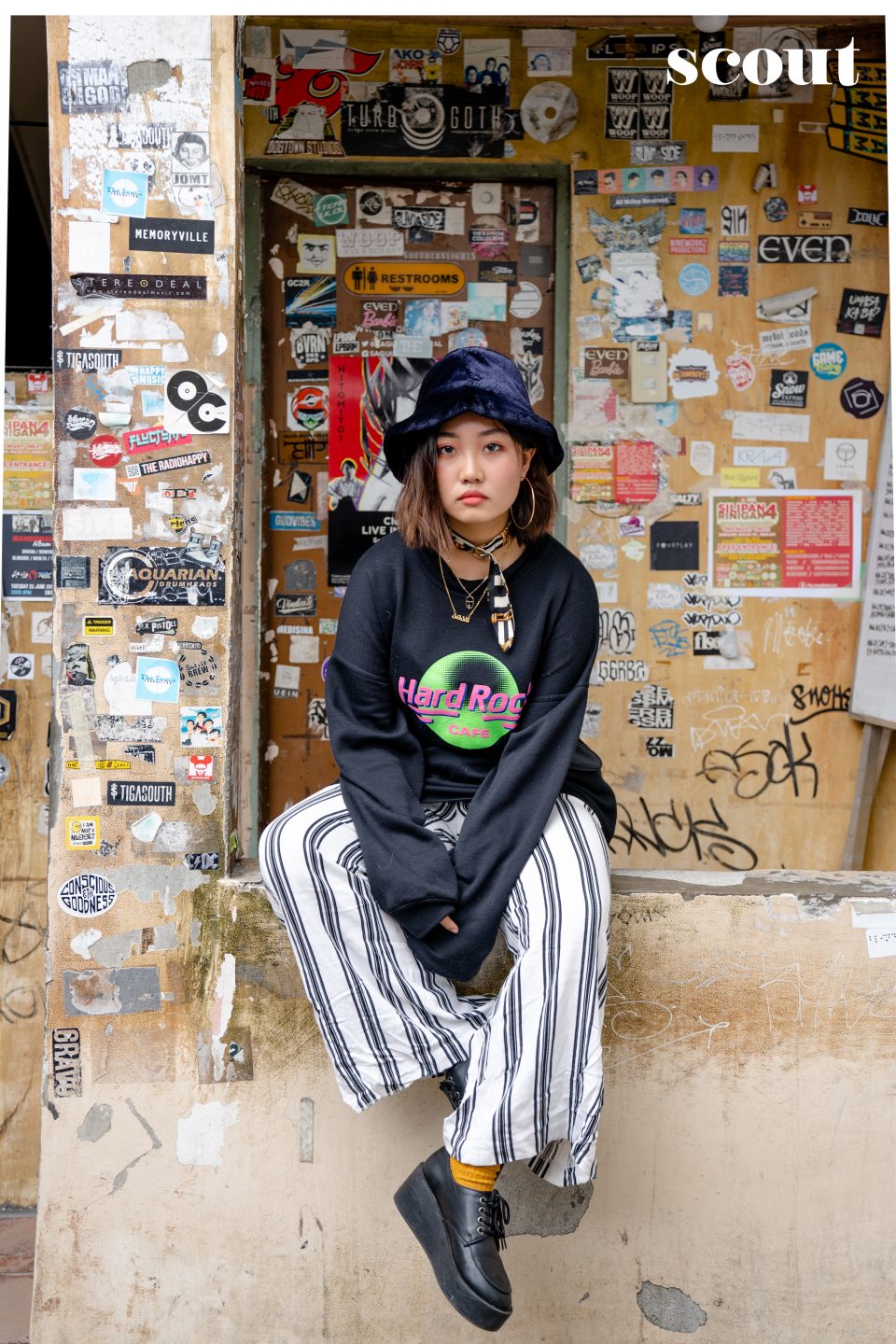 “I really believe that even though there’ll be small crowds lang, it’s worth performing for them as long as your music resonates with them.”

What is your creative process? Do you wait for that eureka moment, or do you set some sort of deadline?
Ena: Dude, I’m like the messiest artist. I write songs that I want to write, not what I’m experiencing. I don’t want to wait for someone to break my heart [laughs]. I’m not like Taylor Swift.
One of my singles “Walk Away” is about this girl and a stalker. You could relate to the feeling, but you don’t do it, so I research. I write the catchy melody first, and then now what? I don’t organize in a way that I have a goal. 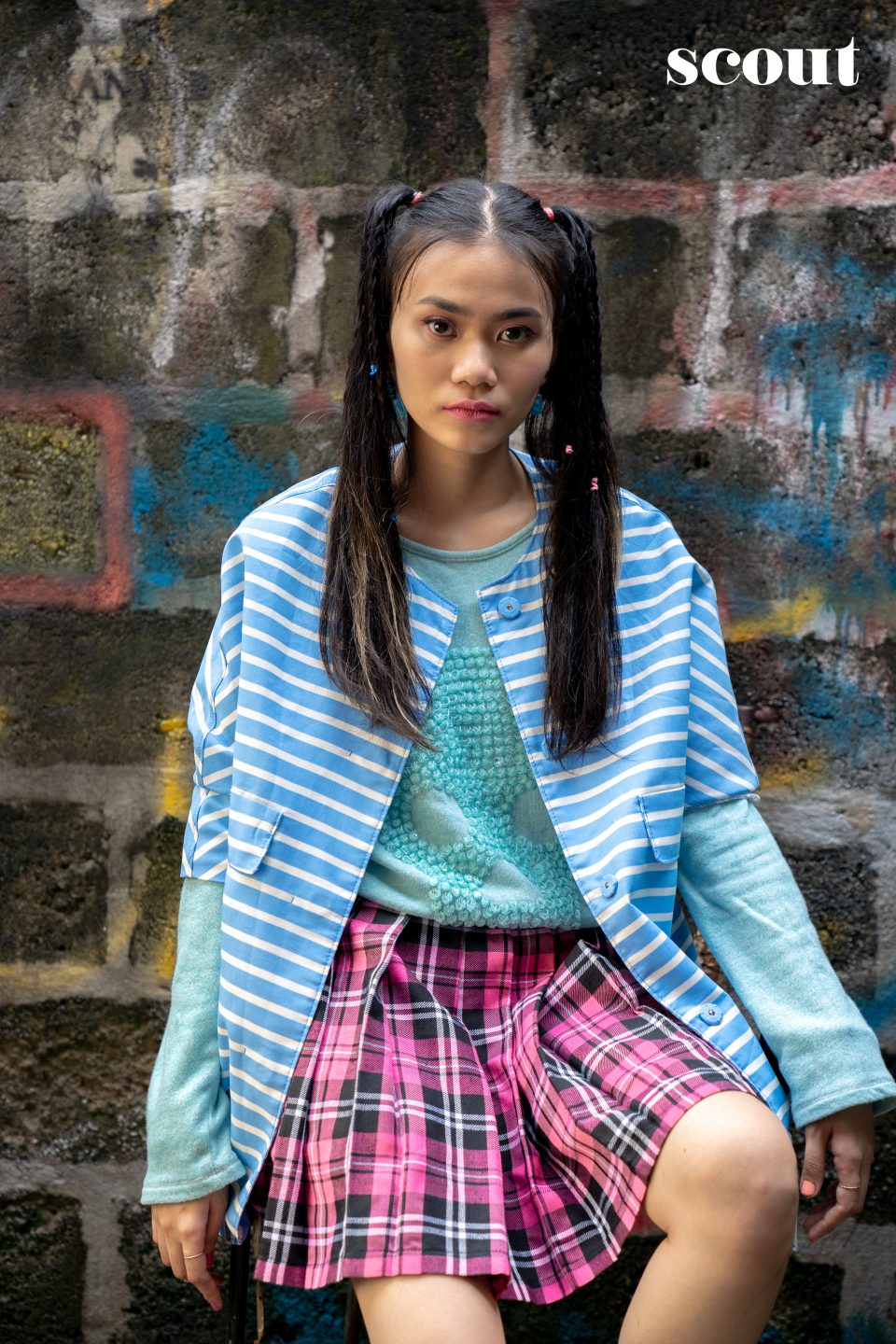 Ena: For fashion, it’s Reese Blutstein. She’s my ultimate coolness, fashion favorite. Also, my other inspo is Kiko Mizuhara. I really like her style as well. [Pikoy] and I were talking about Amiaya earlier, too. They’re twins who are always together. Sobrang cool ng fashion nila. 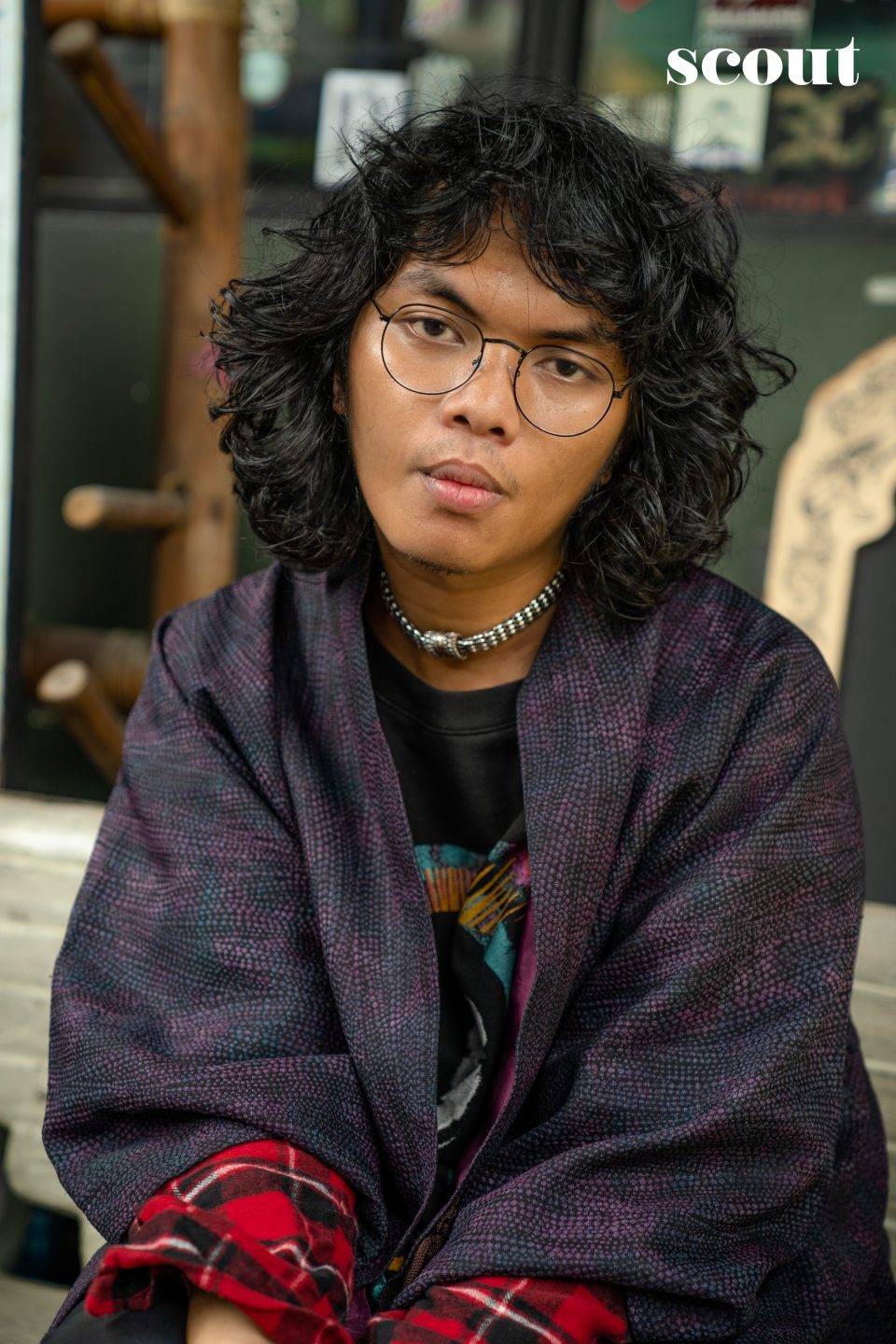 Ena: That’s like one of the hardest things for an artist, like what do you want me to say?

Local music is so vast right now. With a sea of audiences, is there a pressure to conform to audience’s standards or does your art always come first?
Headroom: ’Yun nga sinabi sa akin ng iba, they’ve known my project through word of mouth. Sa simula’t sapul, self talaga ako. Ngayon lang na may tumulong sa akin. It gets even harder to find an audience sometimes. Maybe some artists like to create to push their name sa frontline. Pero sa akin, mas prefer ko that you play for the sake of playing. It’s just what you like to do. 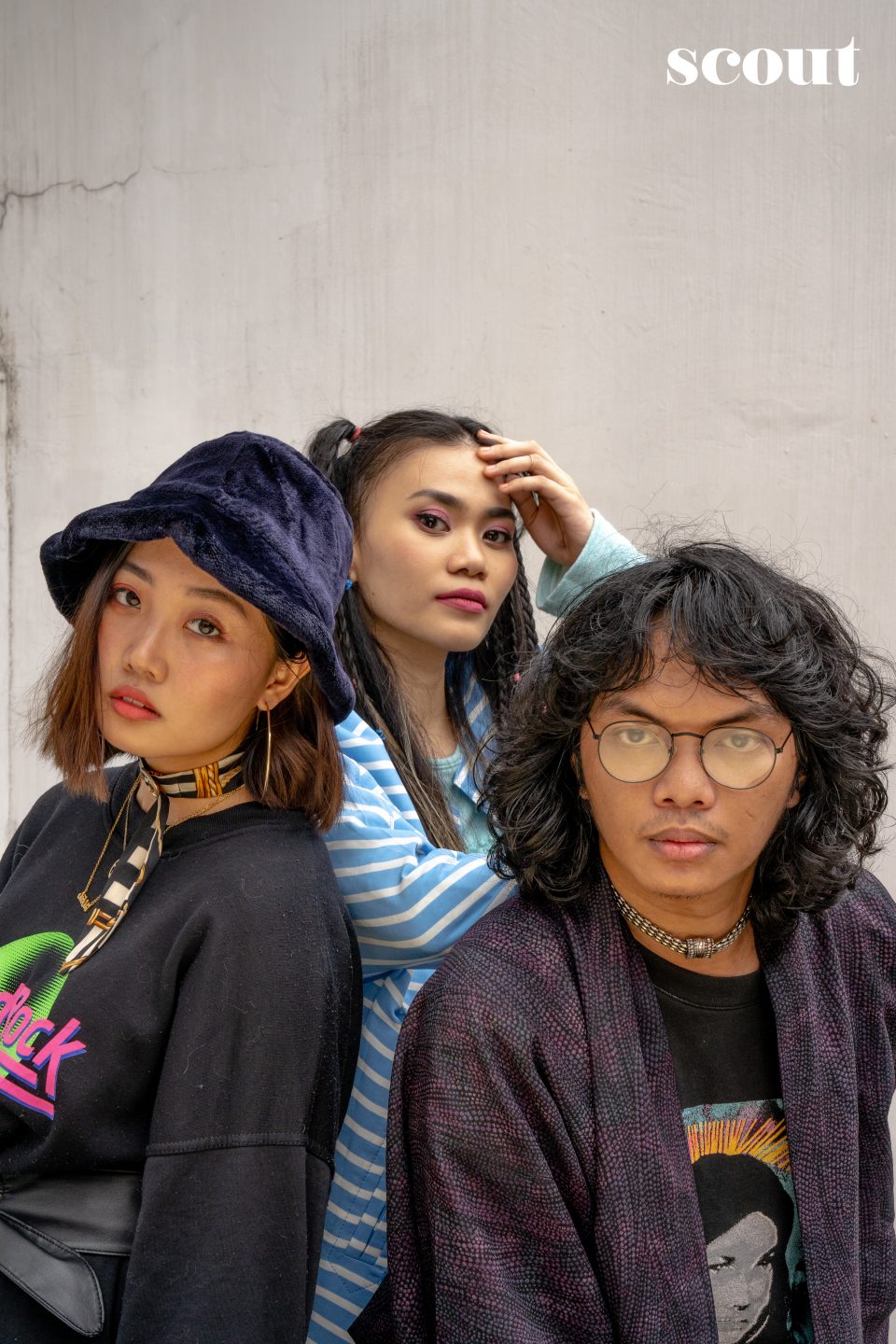 Headroom: May perks din. They’re starving artists, and na-inspire mo sila through your music. That’s one of the things that keep me going in the scene.

“You do whatever purpose you have in your life—and you just do it.”

Ena: I could say the same thing. Sometimes, I think to myself if I should start playing the guitar and just sing, you know what I’m saying? For me, it’s not worth doing if it’s not what you want to do. Your art is supposed to be exposed and inspiring, I really believe that even though there’ll be small crowds lang, it’s worth performing for them as long as your music resonates with them.

Read more: Stray Mullets talk jumping off the bandwagon and hanging out with Manikween

What do you think of musicians and the pressure of getting exposure?
Ena: When it comes to more people and more exposure, people crave for that and people give up on their sound. They change sounds with the wave of the music industry, and I totally get that.
As indie musicians, it’s hard to survive. I just don’t like pressuring myself by looking at someone who’s very famous and making money. That doesn’t really define my music.

Headroom: That’s not the whole purpose of making music. There’s a little bit of marketing, pero you’re not marketing because you need money. You’re marketing yourself to the people as a person and as an artist.

Where do you see yourself in five years?
Headroom: We should make a band [laughs].

Ena: So we’re forming a band [laughs]. I think every artist deserves a big dream. If I’m 25, I hope I’m touring, I hope that I’m making more records that will inspire more people, maybe a bigger audience and hear more stories that they’re inspired with my music.

Headroom: Five years. Sana more gigs at naka-ipon na ako for more gear. That’s what I’ve been missing, I’m limited only to my midi controller na maliit. Five-year goal, hopefully maka-collab ko sina Pikoy at Ena, negosyo, get married, ganyan. Kidding aside, hopefully my sound will evolve more into a much more friendly approach sa tao. You do whatever purpose you have in your life—and you just do it.