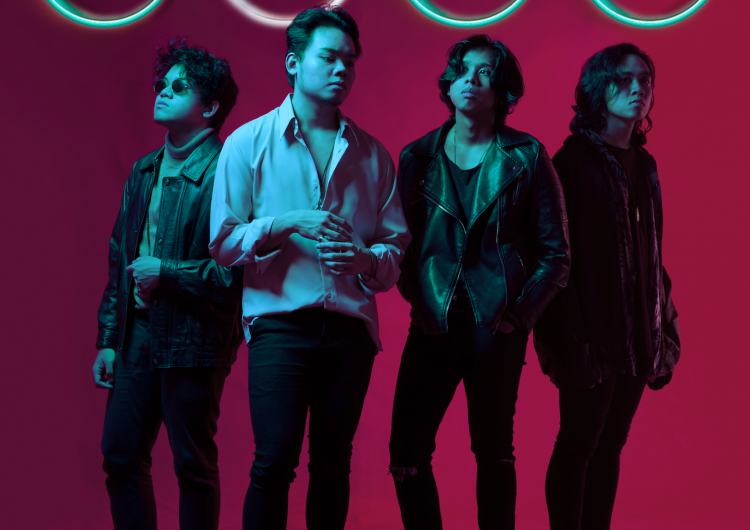 By Denise Fernandez
Photos courtesy of One Click Straight

If you don’t know yet, indie pop rock band One Click Straight has been under our radar for some time now. After recently releasing their music video for their song “Listen,” the group is ready to make waves in the local scene once again thanks to their new visual rebrand as well as a freshly released track.

Bands nowadays are subscribing to not just a solid sound, but a solid image that allows their audiences to visualize the music they’re playing (shoutout to IV OF SPADES, who follows this same mindset). The band has always been influenced and intrigued by photographs, paintings, movies, and anything within the scope of visual art. One Click Straight believes art comes as a package and that music and visual art should compliment each other, thus releasing new group photos, involving dark, mood lighting and contrasting colors.

When asked about their rebrand and what the four circles mean, drummer Tim Marquez states, “Just like a painting or any visual art form, it could mean something else for someone else and I don’t want to box it to just being about the band. I want it to be something more than that or something else for others.”

With the new band vision comes a new single called “Small Talk,” a synth pop rock song that’s one of the first tracks they’ve written since their previous EP release.

“‘Small Talk’ is about the frequent situation you find yourself in when you’re talking to the person you want to get to know. It’s depicts the desperation a person is willing to go through for a glimpse of something more,” the band says about the track.

With Metro Manila under modified enhanced community quarantine (MECQ) till Aug. 18, the...

Gather ’round, one and all, because Scout is back, back again with another...