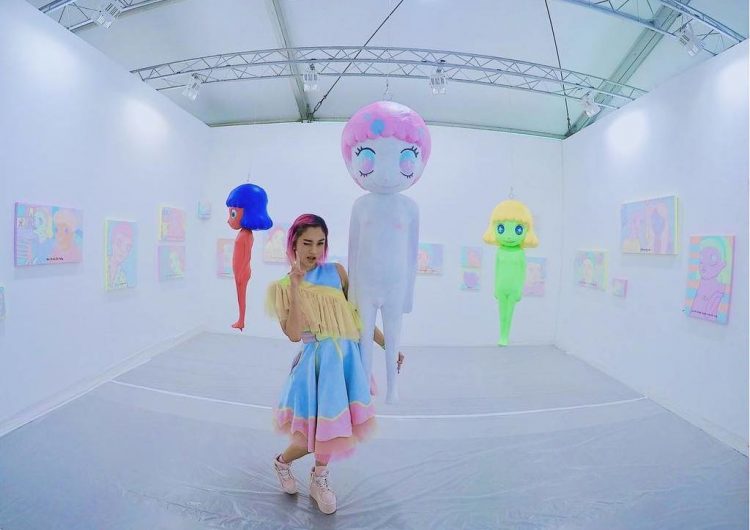 At the recent Art Fair Philippines, there’s a really, really long line found at the seventh floor of The Link in Makati. The queue in question is for Yeo Kaa’s I Don’t Know, Baby. Decorated like a bathroom with neon lights, Yeo Kaa made sculptures and tiles with the signature female character of her work.

If you didn’t get the chance to view her work at Art Fair because of long lines, you have a chance to see more of Yeo Kaa at Art in the Park on March 17 from 10 a.m. to 10 p.m. at Jaime Velasquez Park in Salcedo Village.

3 tips for art fair newbies to have fun like the pros – click the link in bio to find out. #igsg #sgevents #singapore #visitsingapore #sgartweek

Yeo Kaa is exhibiting a huge inflatable figure of her signature wide-eyed subject hugging a goat titled “Alone But Not Lonely” from her recent exhibition Yavuz Gallery in Singapore. According to her, she conceived the idea for the work after going through a breakup where she realized that we can be alone without being lonely. The goat is also inspired by her own stuffed goat.

Also read: Young, broke, and ambitious: How to start your art collection in your 20s

Then, she will also install sculptures from the “Wud ya do it?” show. These sculptures were originally made as piñatas, which she broke in a performance at the same show.

Five years ago, Yeo Kaa and other members of Studio 1616 were regular exhibitors at Art in the Park. In fact, the event, also organized by the same people behind Art Fair Philippines, is made for both young artists and young art enthusiasts.

With 56 exhibitors comprised of galleries, art collectives, and art schools, Art in the Park is the perfect place for young art collectors. That’s because the organizers have placed a cap of P50,000 for works on sale. And Yeo Kaa fans are also in for a treat. She told us that a new set of tiles similar to what she exhibited at Art Fair will be up for sale with a starting price of P1,500.

Aside from Yeo Kaa, expect Leeroy New’s Aliens of Manila installation. There will also be an interesting scent installation by perfumer Oscar Mejia through a machine that will release scented bubbles. And don’t worry about getting hungry; Art in the Park has partnered with chef Justin Golangco of Bucky’s and Sidechick.

If you’re planning to visit Art in the Park to start your growing art collection, here’s a tip: Go as early as you can to make sure that you have more options.