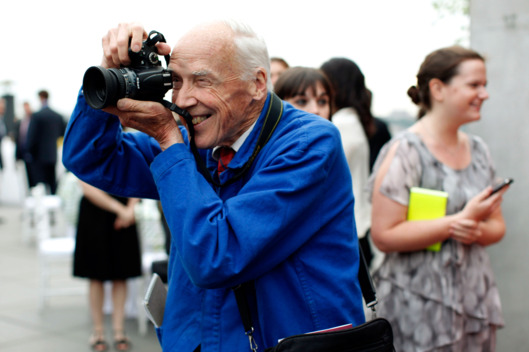 Being photographed by Cunningham was a pleasure and honor no matter who you are. In the 2011 documentary Bill Cunningham New York, Vogue Editor-in-chief Anna Wintour mentioned that, “We all dress for Bill.” As a photographer he didn’t care about who you are or if you were famous or how much money you made; he photographed people who had a little more fun dressing up that day. He did this almost every day without fail.

In the same documentary, the Designer Oscar de la Renta said of Bill, “More than anyone else in the city, he has the whole visual history of the last 40 or 50 years of New York. It’s the total scope of fashion in the life of New York.” This film documented Bill shooting all day on the streets, in his now iconic blue workers outfit, before heading over to the New York Times office to develop his pictures. He then would curate his pictures into a photo series that has been running in the New York Times since the 70’s. Then he would retire to his tiny apartment surrounded by filing cabinets filled with his film negatives.

The image that stuck with me was that no matter where he was, or who he was interacting with, Bill would always sport that unmistakable smile of his. This is a man who seems always delighted. He also invented an occupation that he has done better than anyone else has, and now, after his passing, everyone in the fashion world is starting to feel the effects of that loss. Alessandra Codinha, the fashion news editor for Vogue.com, tweeted this after Bill’s passing.

RIP Bill Cunningham, a true gentleman and irreplaceable talent. Who will we dress for, now? https://t.co/51yuO6ckr3

It doesn’t matter if you don’t care about fashion or photography. Here was a good and honest artist who led a life that was perfect for him, and how many people can we say achieved that? Hope you’re at peace now Mr. Cunningham. We will all continue dressing up for you.

Below are five favorite spreads from his “On The Street” Series.

The usual young adult novels are about romance, dystopia, and coming-of-age. But Randy...