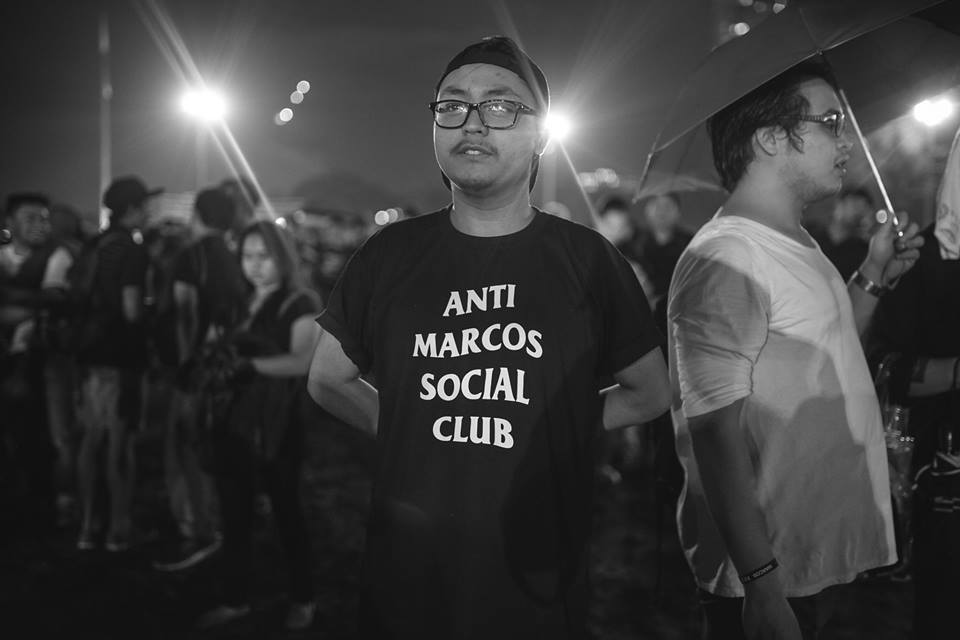 The statement shirt has a long and colorful history of sparking political discussion. People around the world have been doing this since waaaaay back. US Presidential Candidates several decades back have done it. Vivienne Westwood did it.  Not only have statement shirts been widespread, but they have also been effective.NBA players did with their “I can’t breathe” shirt worn during practice. A simple phrase or sentence printed on a piece of clothing has the capacity to draw attention, and more importantly, spark a discussion.

Someone can argue that an article of clothing has no place in political or social discourse, but we should remember that he way we dress has always been reflective of the society that we live in. Our personal choices and experiences is informed by our political and social environment. The personal is also the political.

Hypepeace, a clothing brand based in London, launched shirt designs that rips off the Palace Tri-ferg logo.

S/O ? @hype.peace ?for making these to support the Sharek youth forum #hypepeace ?

“Everyone likes a good parody, especially Palace and Supreme fans. We deeply respect these brands and where they come from, but we’ve always found it astonishing how devoted some of their audience are,” says the anonymous founders of Hypepeace in an interview with FADER. “Imagine how empowering it would be if people would hype things like justice, peace, and equality as proudly as some people flaunt their brands.”

They make a good point. Why can’t we hype peace? Hype, a term thrown around various places from clothing to video games to films, has been the foundation of a number of phenomena, such as pre-order culture and resell culture. Crowdsourced projects like those in Kickstarter rely on hype to generate awareness and hopefully, revenue to complete the project. Long lines are common in hyped-up releases of brands such as Supreme and A Bathing Ape.

But hype has never been a reliable way of promotion, nor has it been a consistent indicator of success. Video games like No Man’s Sky and Dead Island are getting flak for not delivering on its promises made before they were launched. Many projects fail to deliver on the expectations brought on by the hype. And when it comes to clothing with political undertones, people wouldn’t wear it because of the hype. As people are more concerned about what the brand represents, I assume that people who wear a statement shirt agree with what’s displayed on their back or their chest. Yeah, it looks cool. But I personally would not wear it if it doesn’t add to who I am as a person.

So what is interesting about statement shirts today? Another aspect that HypePeace touched on was the power of a good parody. A free design ripping off Anti Social Social Club’s logo has surfaced in light of the Anti-Marcos protests. “Anti Marcos Social Club” follows the same method of HypePeace where a hyped up clothing brand has been co-opted to talk about current issues surrounding us today. The beauty of it is that the resulting image of draws in a wider audience towards a message. 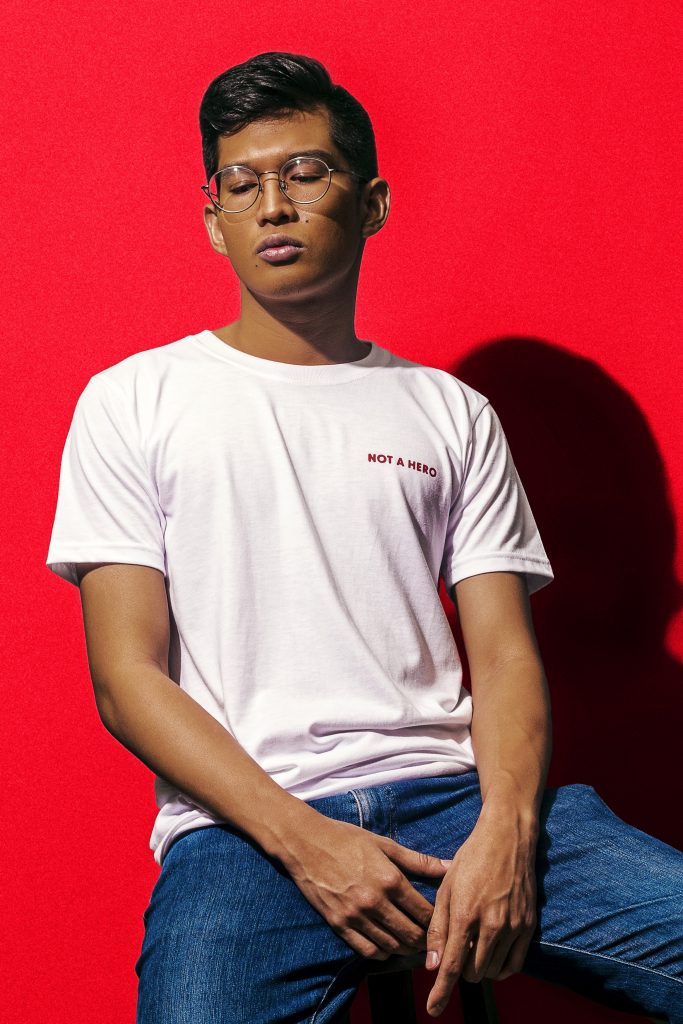 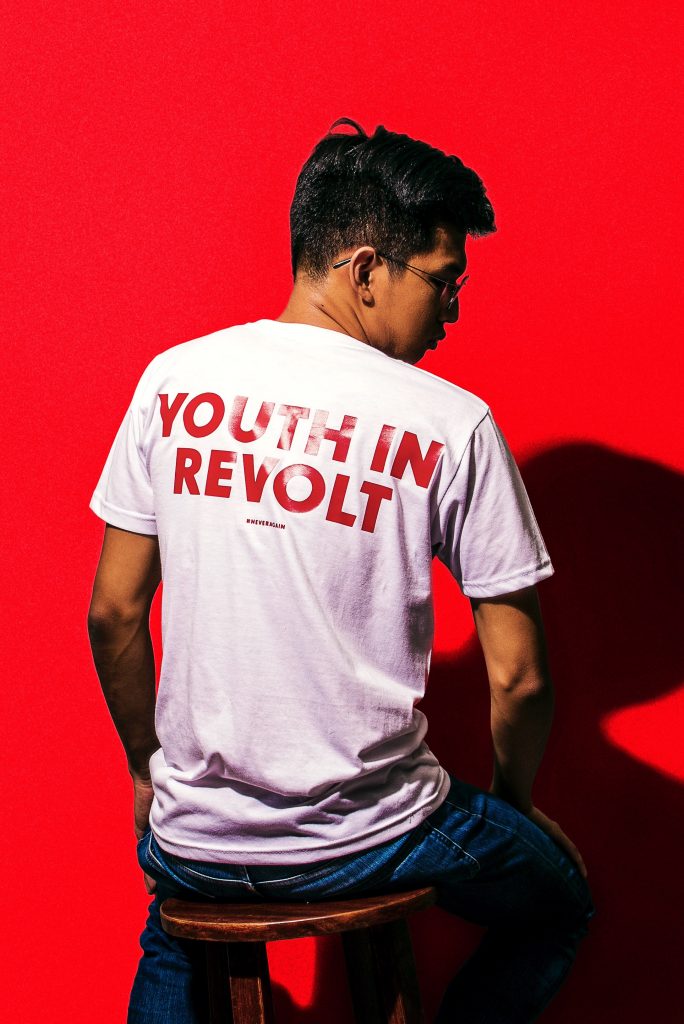 “As part of a younger generation, one can’t help but feel impotent and unimportant in times like these; I wanted to take our feelings of disappointment and anger and turn them into a concrete plan of action and sustainable channel for support,” says Monica Magsanoc, who designed the Youth In Revolt statement shirt with her sister. “My younger sister Mica and I decided to create and sell a simple shirt expressing our indignation towards the issue, with all proceeds heading to the victims of Martial Law.”

The print reads “Not A HERO” on the front and “YOUTH IN REVOLT” prominently on the back, with a smaller print of “#NeverAgain” on the back. “My late grandmother, Letty Jimenez-Magsanoc, was a journalist during the Martial Law era. She used only pen and paper to expose the injustice of the Marcos regime, and begin the movement of press freedom against his dictatorship. With [the burial of Ferdinand Marcos at the Libingan ng Mga Bayani], I was compelled to keep fighting for the battle she already thought was won. Every inch of the project is dedicated to her.”

With a big red print in bold on a white shirt, the design is far from tacky. More than a novelty, the designs of Hypepeace and the Magsanocs have caught the attention of many people online. Since opening up the shirts for purchase, more than a thousand people have ordered according to Monica. Hypepeace designs are sold out as well. People who have printed the Anti Marcos Social Club design have also surfaced online to a resounding number of more than a hundred orders, according to the sellers.

The best thing about these shirts is that proceeds go to a good cause. ” All proceeds of [the Youth In Revolt project] will head to the victims of Martial Law, coursed through RockEd Philippines,” Monica says. “We will either zone in on a particular family, or partner with another organization called FIND (Families of Victims of Involuntary Disappearance).” Meanwhile, money from Hypepeace will go to the Sharek Youth Forum, which helps Palestinians in terms of employment.

The takeaway then, is that there are these efforts to voice an opinon or idea out to the public sphere without being intrusive. The draw with the designs mentioned is that they capture the same hype generated as popular clothings brands, and subvert that hype towards something substantial.  As imagery, the prints engage whoever sees them. The more people who sees these clothes, the more chances for a discussion to be prompted. It’s a subtle and effective way to raise awareness about issues, and if a discussion is made by these clothes, however toxic they may be, then good. We all have something to get out of our chest anyway.

By Danice Abril Photos from Al Gentrix and Sirch Toffee Millennials seem to...