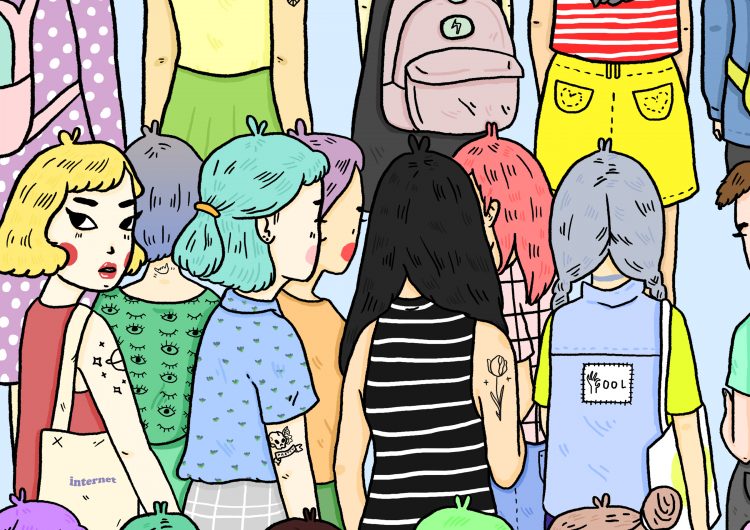 Raise your hand if you’re one of those people who always somehow manage to fuck up in one way or another in social settings, and have humbly accepted the truth that not everybody is a born charmer. At the very foundation of your being, you are socially awkward, maybe just a hair’s width away from the threshold of being full blown inept, treading the waters of adulthood handicapped—which, frankly, sucks. Because navigating through the adult world is tricky enough at it is without having to think about the politics of human nature.

For the socially awkward, few things can offer as much satisfaction as a steady internet connection or a gift card to Amazon. Not to say that they’re complete recluses, but a chance to distance themselves from the company of other people is always a welcome thing, as well as the chance to vicariously live and learn through other people’s experiences instead of actual participation. According to a study by Joshua W. Clegg, Assistant Professor of Psychology at John Jay College of Criminal Justice, on the phenomenon of socially awkward situations, awkwardness comes in many forms but is primarily characterized by “a sense of moral or social transgression”—a complicated display of subjectivity at its finest. Being hungry and broke are things that can be dealt with on a basic level in a formulaic sort of way (i.e. job + effort = money for resources). The trouble of having to deal with elements such as emotions, opinions, cultural, political and religious differences, and just the general idea that people are social beings by nature is another entity all together. It’s a mind versus body predicament we all have to go through every day, and it’s something that can’t be avoided. People will always need other people.

The terrain of the adult world is vast and complex, one of the most difficult to trek being the transition phase from teen to grown up. Most notions of it are usually proven wrong by reality, especially with the sudden shift in quality of life brought on by the Internet. “For some people, being in your twenties is a time of exploration and sex and going on millions of dates and having your parents pay for shit,” Alida Nugent writes in the introduction of her book Don’t Worry, It Gets Worse: One Twentysomething’s (Mostly Failed) Attempts at Adulthood. She then follows with an admission that for her, it’s “a time of rolling around and watching my life moments get devoured by the Internet, all while hoping I eventually figure out[…]my future,” a sentiment that echoes the thoughts of many millennials who have quickly lost their bearings once faced with the unstructured reality of life post the educational system.

Sometimes I find myself scrolling through my Facebook timeline for a good hour, unintentionally fixated on updates on other people’s lives while simultaneously setting myself up for comparison and disappointment. Classmates from high school get engaged, get married, have children; I sit on my ass in my ratty PE shirt with no plans on a Friday night. A former colleague posts a status giving thanks to Him for a successful first year after quitting corporate life #blessed; my current account gives me a big “fuck you” and forces me to touch my savings account.

A girl six years my junior uploads snippets of her life taking on her dream job in beautiful single sole stilettos; I stumble around in sneakers and get mistaken for a toddler. Things like this, as shallow as they may be to the well adjusted, can seriously take a toll on the socially awkward, making it easy to forget that dilemmas like this aren’t at all uncommon. Before catching her big break with The Office, Mindy Kaling struggled to make ends meet despite being a Dartmouth alumna. In her book Is Everyone Hanging Out Without Me? (And Other Concerns), she humorously recollects her misadventures post-graduation, from babysitter with an Ivy League degree to stalker intern on Late Night with Conan O’Brien to production assistant for a TV psychic with a still very unutilized Ivy League degree.

For the socially awkward, few things can offer as much satisfaction as a steady internet connection or a gift card to Amazon. Not to say that they’re complete recluses, but a chance to distance themselves from the company of other people is always a welcome thing, as well as the chance to vicariously live and learn through other people’s experiences instead of actual participation.

But sometimes it isn’t even about the pressure of being on the same level of success as your peers. Simply not being able to keep up with the times and having the same mindset as everybody else can make a highly sensitive person feel out of place. Take the resurgence of online dating and the rise of Tinder for example. I once downloaded the app only to delete it after about 20 swipes to the left. “It makes me cry because it means that fewer and fewer people are believing it’s cool to want what I want, which is to be married and have kids and love each other in a monogamous, long-lasting relationship,” Mindy Kaling writes in relation to her romantic misadventures. Hook-up culture is something that I will never understand either, and it somehow makes me feel alienated around friends who excitedly exchange stories of their online shenanigans.

Then there are those whose social awkwardness stem from an underlying cause. A study by the World Health Organization back in 2011 identified the Philippines as the South East Asian country with the highest incidence of depression, while the Anxiety and Depression Association of America has found that over 15 million American adults are affected by social anxiety disorder. Though depression and anxiety are not the same condition, they often share many symptoms that affect people’s social skills, like extreme nervousness and heightened paranoia over making mistakes, being criticized and being embarrassed in public. It’s also hard to deny that until now, mental illnesses are still treated as a stigma, something to be ashamed of and not acknowledged.

Sometimes I find myself thinking that maybe one of the reasons why it’s so hard for me to connect with people is because of the things about me that I feel like I’m not allowed to talk about. Having a mental illness is nothing like being physically ill. I can’t just go telling people I suffer from clinical depression and mild anxiety disorder and expect acceptance the same way some people can easily admit to having diabetes. Everybody has his or her own battles to fight, of course. It’s just difficult to feel like you have to hide a big part of who you are as a person to get by. It can make you feel like a fraud, like a liar by omission, so you’d rather just keep people at arm’s length. But as complicated as it is, sometimes there are moments of clarity when this hurdle feels like a gift.

“There’s something about depression that allows you (or sometimes forces you) to explore depths of emotion that most “normal” people could never conceive,” writes Jenny Lawson in Furiously Happy: A Funny Book About Horrible Things, and you know what? It’s the same way with social awkwardness. While it purely looks like a major roadblock at face value, there are still a few good things that come from it. In her essay The Science of Awkwardness, Anna Medaris Miller, a multimedia health writer and Health and Wellness reporter at US News, points out that most feelings of awkwardness, while unsettling, help people be extra aware of social expectations and boundaries, and help us avoid making the same mistake twice.

If you raised your hand earlier, put it down and give yourself a pat on the back because there’s nothing wrong with being socially awkward. The only fault in it is when you give in to self-sabotage. Yes, things rarely ever come into focus easily, but it is important to remember that the choice to soldier on will always be there and that being thrust into awkward situations should always be treated as something to learn from and shouldn’t deter us from experiencing the fullness of life. Everybody gets bent out of shape every once in a while—some more than others, unfortunately—but if you’ve somehow managed to not let yourself be crippled by the many mistakes and experiences that haunt you, then raise your hand one last time and give me a high five.