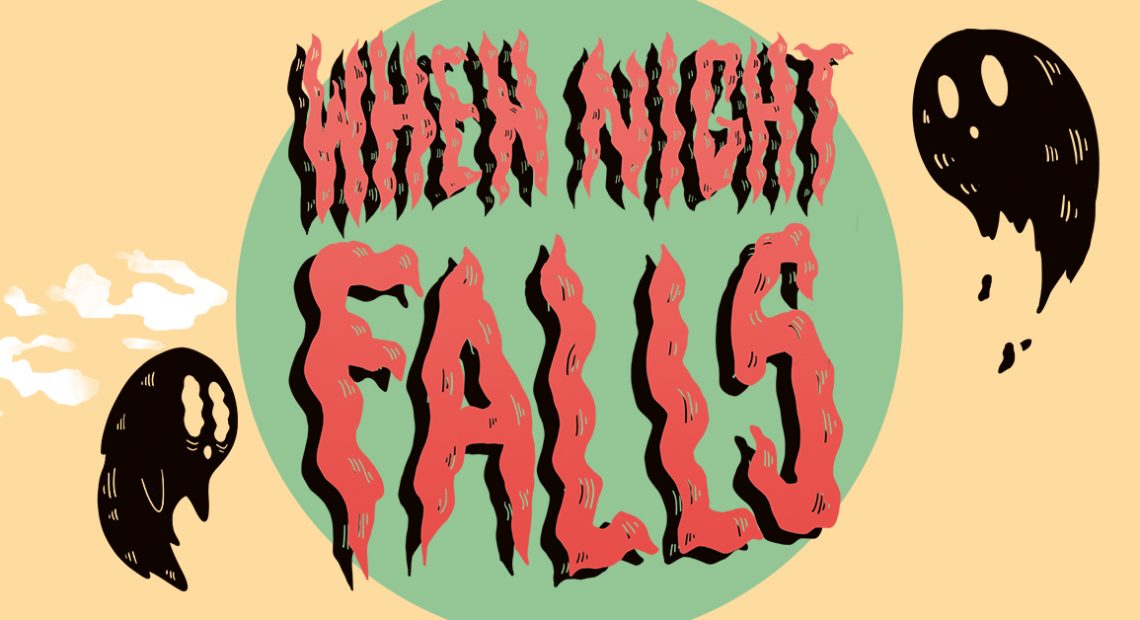 Writers tend to find magic in the most unlikely places, but in these non-fiction pieces, the supernatural pays the authors unexpected visits by their own accord. And not all encounters are so friendly.

While You Were Sleeping
By Denise Fernandez 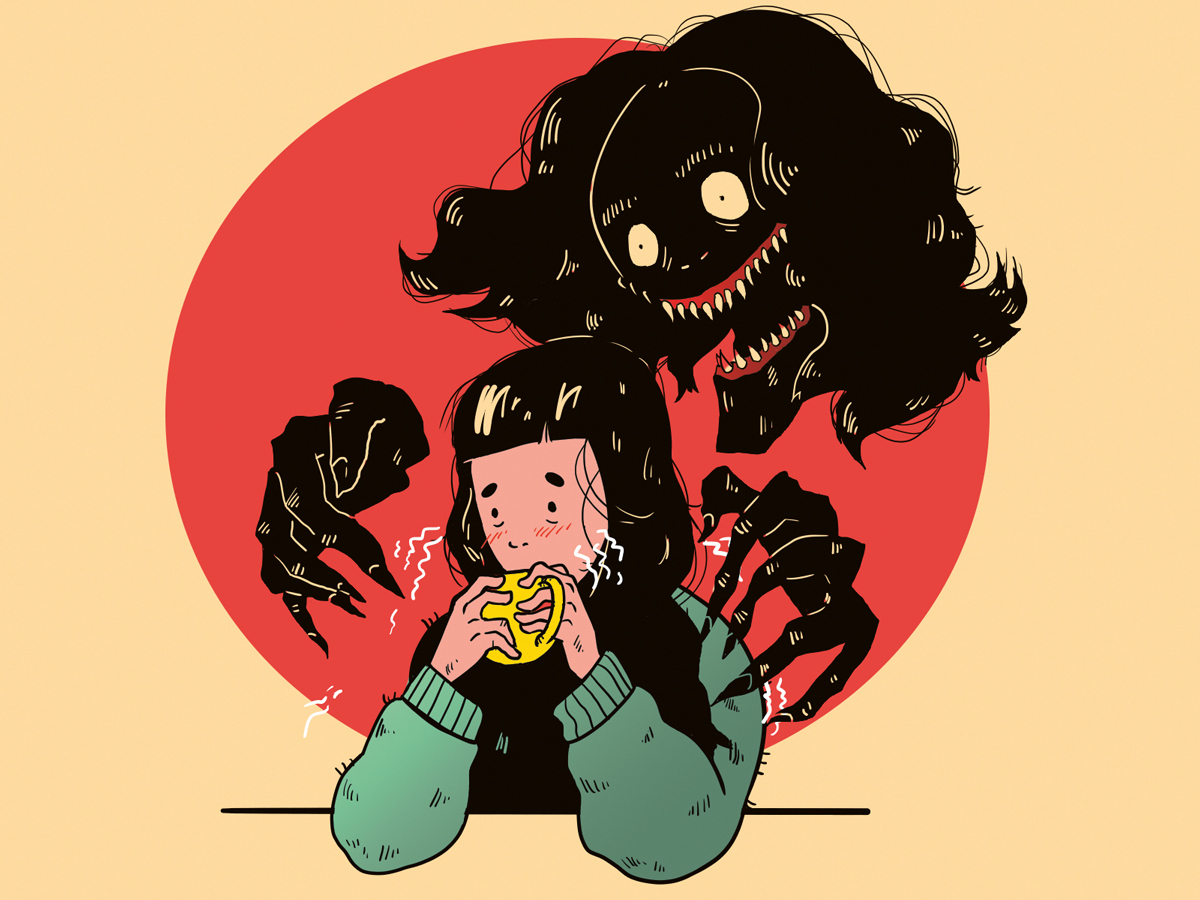 My Saturday mornings are usually pretty great. I stay in bed until noon and get to worry about nothing at all for even just a little while. My entire family normally has breakfast in the dining room without me—they know I’d rather sleep in by myself than get up at an ungodly hour for food.

Everything had been seemingly normal. I was drifting in and out of consciousness when I heard my relatives go downstairs for their usual breakfast. I laid on my side as I continued to sleep.

That was when my entire body froze.

I first heard about sleep paralysis when I was in college. My friends would talk about an unseen force pressing on their chests, sometimes so heavy that they’d stop breathing. Others would tell me of seeing shadows in their bedrooms, illusions of an old hag creeping on top of them. I had never experienced it myself, and thought I never would, until that one Saturday morning.

I knew when I woke up that that was it. I was finally getting my own episode of sleep paralysis. I was awake, but dared not open my eyes for fear of the monsters I would possibly see. I kept still, unable to move any part of my body, hoping that this was the worst it could get and that control over myself would come back soon.

She spoke to me while I desperately tried to wait it out as calmly as I could.

Despite her words, her tone was far from comforting. The whisper felt like it came from a presence behind me, a warm breath murmuring into my right ear. The voice sounded similar to a fusion of a banshee and a dying animal. Whatever it was, it wasn’t human.

Wake up, my darling.

It was a challenge. She was daring me, because she knew I couldn’t.

I screamed as I tried to break away from my paralysis. Running down the stairs, I settled into the dining table and had breakfast for the first Saturday in a long time, my hands still trembling. No one in my family knew what just happened.

Sleep paralysis affects around 63 percent of the entire human population. They say that the more you’re aware of the condition, the more you read or watch material about it, the more likely you’ll experience it yourself. When you do, don’t open your eyes.

It Wasn’t Him
By Anthea Reyes

I was expecting him.

We got home late one evening, to a house we knew was haunted from the beginning. It was a beautiful house with a built-in mid-century chandelier, high ceilings, and marble flooring.

The ghost was kind. He was a tall, imposing figure, and he was kind. There were voices, unnerving dreams, and inexplicably moving objects, but never ill intent.

Once, he mimicked my mother’s voice, yelling at my sister to come inside before it got dark. Everyone heard it—my sister, her playmates, our maid, and our grandparents living across the street. Everyone except for my mother who was at her office in Makati. And me, who was inside the house.

Once, our maid, Ate Ai, dreamt of the man coming down to her room in the basement. He sat down and stared at her from the stairs with unseeing eyes.

Every time he made his presence known to everyone in my family but me, there was never malice. In fact, we started seeing him as an odd guardian. He wasn’t welcome per se, but he was there before us.

That night, I had my turn with him.

It was dark and quiet. Our village was going through a brownout. My mother went ahead of us to light candles at the altar, the one at the end of a narrow hallway, between my room and my parents’.

The candles shed a dim orange light on both of our rooms, casting shadows on every corner. I went in after my mother, going straight to my bed, lying on my side, and staring past my open door, through my parents’ doorway, and right into their full-body mirror standing by the corner of their room.

I started feeling…numb. Not quite awake, not quite asleep. I kept looking at the reflection of my parents’ empty bed, telling myself that I was asking for trouble. Something was going to show up, something that’d be scary.

But there was a coldness, a sudden lack of feeling shrouding me. Then, I felt a breath right above my ear.

The rasping voice of a woman whispered, “Sa’kin ka.”

I froze, spent a second convincing myself it was just my imagination, or my mom. Still, it was like my body had a mind of its own.

So I went to my parents’ room. It said be terrified, so I cried. I had been expecting a frightening happening. But whoever, whatever that was, it wasn’t him. 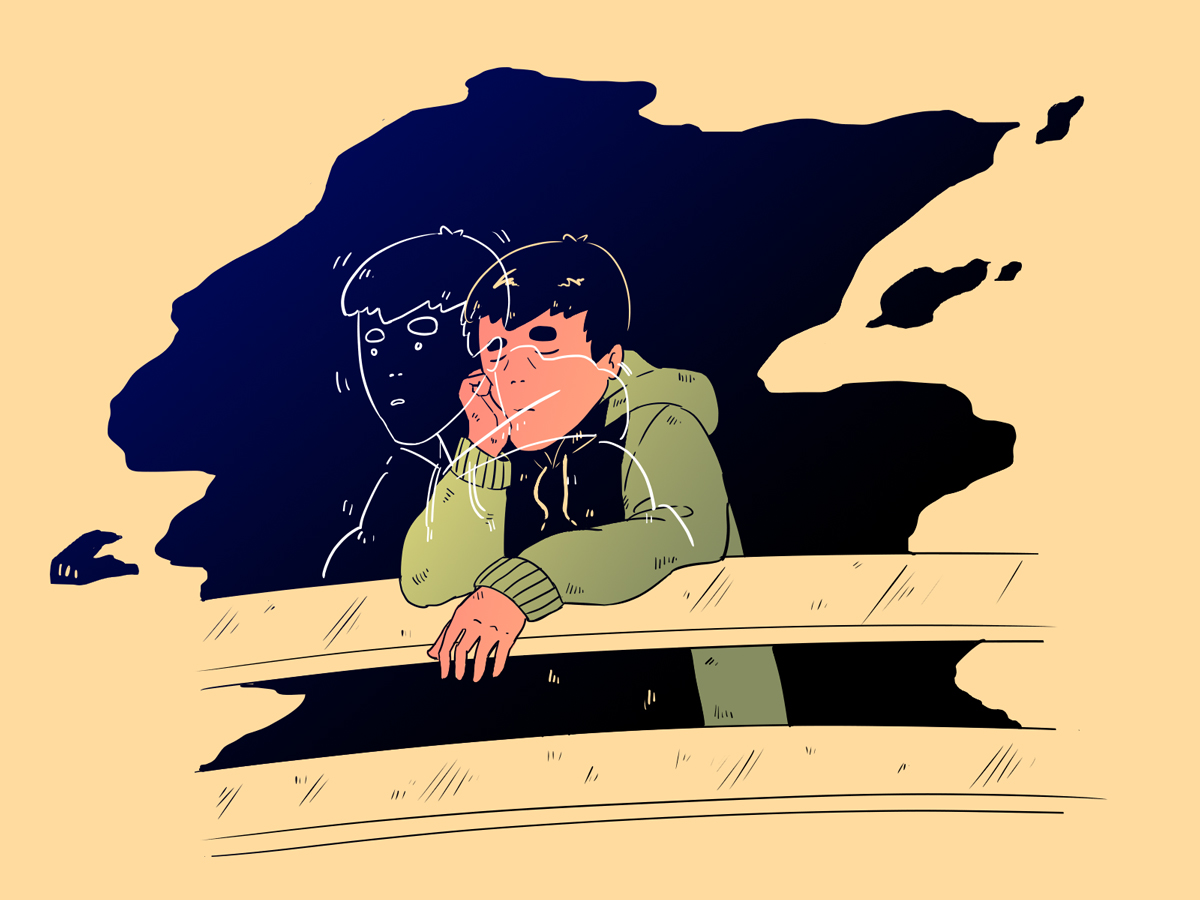 You’ve always dreamed of being able to teleport. The convenience this little magic trick or superpower could give would be a solution to all your problems, you think. Especially so on this chilly spring evening.

You are on a ferry boat in a foreign land. The waves at the harbor rock the ship gently, but coupled with your hunger and your heart-stopping first bicycle ride across busy streets, even the gentle swaying makes your head and your insides turn. You’re getting seasick.

You look out from your window-side seat but see nothing. Nothing but the little patches of light at the harbor reflected on the water. Nothing beyond, no land ahead. Just sea. Lots and lots of sea.

When are we ever going to leave? You wonder, head in your hands. Minutes pass. The unintelligible rambling of a sea safety video buzzes in your ears. The waves continue to rock the boat. Your stomach rumbles. Your head pounds. Why aren’t we moving?

And then you think, how convenient it would be if you could teleport. Then and there. Maybe back home, where you can finally lie in bed and rest your tired feet. Or maybe to a good restaurant first, because God knows it’s your hunger causing this terrible pain in your head.

But teleportation doesn’t happen the way fantasy stories show it. Science says physical teleportation isn’t possible. (Or perhaps not yet.) Teleportation, the scientists say, can only be at the atomic or quantum level, and only particles or data can be transferred. Philosophy questions it: If, for example, you were to break yourself down to your core atoms and transport these atoms, will the you at the destination be the same as the you from the point of departure? A video game series, on the other hand, combines all these elements, breaking characters into atoms and transporting them—rather, their consciousnesses—not through space (alone) but through time.

You lift your head and you see your fellow passengers standing, disembarking one by one. You look out over to the sea, but you see nothing.  What is happening? Why are we being made to leave?

Slowly, you yourself disembark. Of all the times for a malfunction it had to be tonight. No one says a thing. Or rather, no one says a thing in English, or any language you can remotely understand. You follow the crowd, until you exit the harbor. 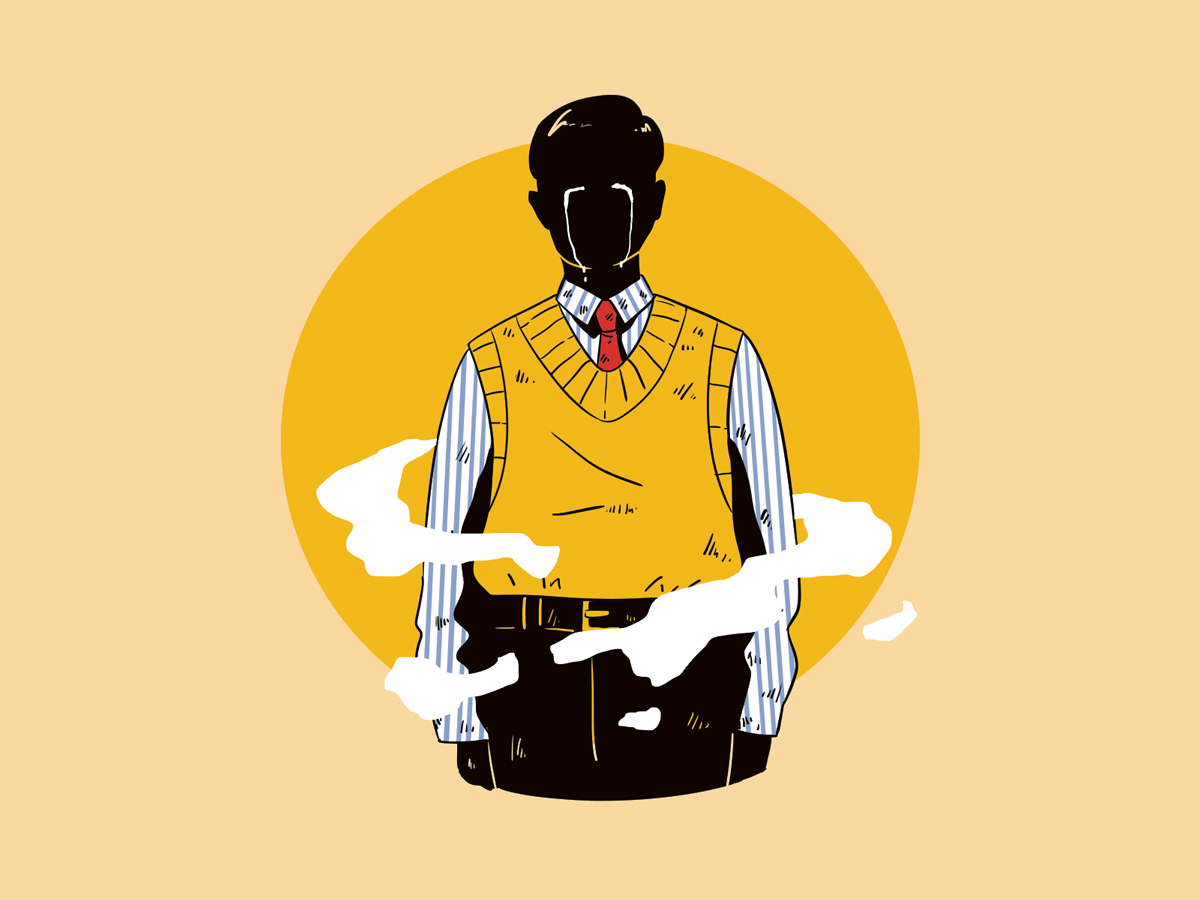 Mr. C was the nicest teacher I’ve ever had. He gave the easiest exams, greeted everyone with a smile and never, not even once, raised his voice in class.

Of course we were horrible to him. We were such brats. We used his class time to eat, chat, braid our hair and work on projects for our other classes. We made fun of the dumbest things like how he was the only teacher who rode a bike to school or how his eyes would widen every time he got really enthusiastic in his lectures. Even the other teachers would imitate his goofy grin and his stutter. And yet Mr. C’s kindness never faltered. He never took anything personally, which frustrated the hell out of everyone. We all longed for the day he would finally snap.

But he never gave us that satisfaction. It was the middle of Christmas break when Mr. C died in his sleep. The last thing he said was how excited he was to cook for his family the next day. Except he never woke up. None of us knew he had heart complications. Nor that we would be his last advisory class. And as his class president, I had never felt more awful about myself.

A few days later, I found myself back in Mr. C’s class.

As usual, nobody paid attention to his lecture, including myself. I remember being in the middle of a conversation with my seatmates when for some reason I felt the need to get up. The moment I stood up, the reality of Mr. C’s death hit me like a bucket of ice cold water dumped over my head. I looked at Mr. C and saw a man smiling and full of life. Goosebumps crept over my body. I started crying. The voices around me mellowed until the only the sound in the room was my sobbing. Mr. C asked me what was wrong. I kept apologizing, kept telling him he deserved better. My classmates began to cry, too. I asked him why he had to leave so soon. I turned to Mr. C and saw tears running down his cheeks. On his face was a small, sad smile. I asked him if he’d ever forgive us but before he could respond, I woke up, sobbing.

Hey, fellow commuters! Our daily grind just got greener and it seems to...

It’s time again for one of the biggest annual fairs–Satchmi’s Vinyl Day is...