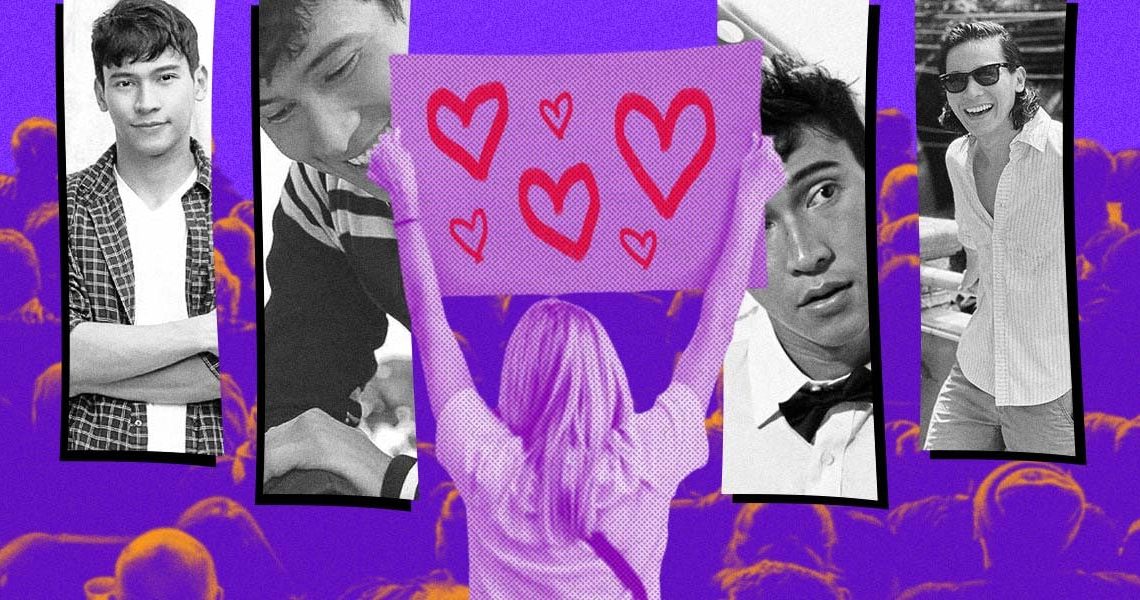 While Edward Cullen and Super Junior lived in my grade six classmates’ wallets, I had magazine cut-outs of Enchong Dee in my portfolio. “If lost, contact this number,” I wrote at the back of the cover. “Don’t steal. Karma will haunt you.”

Placing Enchong in my portfolio said a lot about how important he was to me. Another telltale sign is finishing my homework early so I could catch “Tanging Yaman,” “Magkaribal” and “Katorse.” I spent my limited broadband internet load to check updates from his fan pages, if not for school research. Hell, he even popped my second lead syndrome cherry.

There’s no denying Enchong was my gold standard for crushes back then. (if you’re not him, I don’t see a future for us, sorry.)

As a 13-year-old who’s still learning the ropes of emotions, I did a pretty good job at being Enchong’s imaginary non-showbiz girlfriend. “Sardines,” I once answered in a Facebook contest hosted by Gigger Boys, his former boy group, when they asked what Enchong’s favorite food is. Everyone else said “sisig” and “siomai.” But I nailed it. Subscribing to his Kapamilya Text stream (GMs, make it celebs) was also a no-brainer. It was the closest thing I could do to communicate with him given our physical and metaphorical distance.

One day, the pact became official. “Jelou Galang-Dee,” our secretary wrote in the daily logbook.

One day, the pact became official. “Jelou Galang-Dee,” our secretary wrote in the daily logbook. As class president, this was the first time I could potentially be sent to the disciplinary office. But I took the risk. Instead of whipping out my correction fluid to remove what I believed was my future surname, I kept it.

I took a lot of risks for Enchong. Being the humanized version of the #GrowingUpShy Twitter trend, I didn’t like crowded events. But I needed to see Enchong, I told myself. Even if I had to swallow my pride and sit beside a hundred more people who also think they’re his non-showbiz girlfriends.

To repay Enchong’s rich updates via KText, I decided to write him a letter. In that way, my words will be immortalized in ink, like how my classmate did with “Jelou Galang-Dee.” In my first Enchong mall show, I approached someone from the production crew and asked them to hand my letter to him backstage. When I got home, I didn’t find my name on Enchong’s list of fans he thanked for letters and gifts.

I kind of gave up. Once, I attended a poetry reading session with my mom in Greenbelt. Enchong was also there to perform, as a king of superior taste in the session. His intelligence is one of the things I liked about him, aside from his dedication to acting, dancing and swimming.

Being Enchong’s fan made me realize that I like reaching for the impossible.

I didn’t attempt to approach him in the poetry session, but I did have a chance to have a photo taken with him at an event in 2011. As expected, I couldn’t breathe—but I had to since I should spell my name right during the autograph. Being Enchong’s fan made me realize that I like reaching for the impossible.

It was the peak of my childhood fangirl experience. But what comes after the peak?

”Mawawala rin ‘yan,” my older cousin told me when we passed by Enchong’s billboard. She was right.

(Your feelings will fade someday.)

But my admiration didn’t exactly “fade.” It only toned down, like how usual first loves go. I had less time to keep track of everything going on with Enchong. I focused more on studying, explored other interests and became a fan of more people and things.

However, my support for him remained, like an irreplaceable childhood crush. Actually, I was doing something I learned from him: to continue growing.

And when adulthood started rushing in, I witnessed his growth, too. He’s not only the TV softie or hunk athlete everyone knew. He’s now amplifying voices. He speaks the truth. He’s not scared to challenge the status quo.

I was never an athlete or a dancer like him. But as adults, we share the same belief of fighting for what is right.

”We have to start thinking beyond ourselves, our voice is not for us but for others who have nothing, those who live paycheck to paycheck,” he said, persuading other celebrities to speak up in the height of the ABS-CBN franchise renewal issue.

When 54 trees were cut in Baguio this year to make way for a new condominium, Enchong didn’t think twice about going against it. “This is what happens when you [allow] backwards leadership rule,” he said.

It’s a long list I’m hella proud of. Normally, we outgrow our idols, or vice versa. Luckily, the fan-idol dynamic worked for Enchong and I—at least from my POV.

Grade six Jelou’s daydreams may not have come true, but I’m happy knowing I somehow grew up with Enchong. I was never an athlete or a dancer like him. But as adults, we share the same belief of fighting for what is right.

When I cried my heart out after watching “Elise” for the first time, I knew Enchong has always lived in my head (not only in my portfolio) rent-free—and he can definitely overstay.

There it was: shining, colorful, and untouched. My breath caught in my throat....