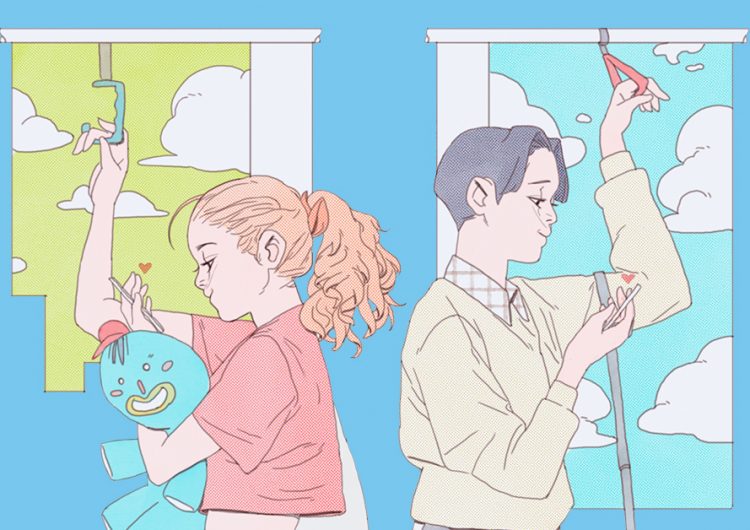 I moved households a few times when I was younger: from my birthplace, Baguio, to the heart of Manila, the coastal part of Cavite, and to a suburb in Bacoor. While some homes felt more familiar than others, I had distinct memories of each. Most of them involved friends. I grew up with the thought that each time we’d move, I’d never see the same set of friends ever again. Sometimes the pangs of being free to visit each place would enter my mind, and I thought it would be a good idea—until the time that I actually attempted to do it. I realized that I could never really return to the homes I had lived in, because they will never be exactly the same as I left them, or vice versa.

I felt the same way when talking to strangers on the internet. It didn’t matter that we might not be able to talk again. It felt exciting to live in the ephemeral and the anonymous.

Read also: I fall in love during times of transit

The first time I had a memorable conversation on the internet was on the official Eragon website circa 2006. As part of its promotional campaign, the fantasy novel series-turned-box-office-flop had this great idea of hosting a website where people who clicked on the same things would fall in the same chatroom, two people at a time. I never was a fan of Eragon, so I don’t remember the specific things I had to do to “match” with someone (the system had something to do with virtues and dragon eggs?), but after a few minutes, there I was, saying my first hello. “Hi,” the person on the other end said. So went a good 30 minutes of our talking about where we’re from (she was from Adelaide), how old we were (I was two years younger), a little bit about the books we’d read (she couldn’t believe I hadn’t read Eragon yet), and then on about how we lived and how it was where we are. Questions you normally wouldn’t ask to someone you haven’t met in person yet.

But this was the time of the wild internet, where everything was in an amorphous state, and you never knew if you would end up ever meeting IRL, let alone talk again. Not on this platform. I felt that we were both afraid to give away too much, in case the person on the other end of the line would turn out to be a total creep, but we were also too trusting to become anyone else than who we were. She said goodbye, I closed the window, and that was that.

Before social media, the thought of keeping in touch with strangers online for me could only happen in video games. I used to play Endless Online, a janky fantasy online role-playing game that was already outdated even then. It was one of the few games my PC could handle, and with only a few thousand players at the time, it wasn’t that hard to end up striking a conversation with someone. I remember joining a Facebook-like social media platform designed for kids called Matmice, and by the time I shifted to Ragnarok Online, I had joined Friendster and then Facebook.

I was about to graduate high school when the Facebook craze started. People treated it the same way they did Friendster: adding strangers and posting on each other’s walls. Poking was still a thing. Everything was innocent. I don’t remember how it happened, but I ended up becoming an admin of one of those corny Facebook pages that were named after statements. As admins, we treated it like a blog, asking questions and just talking about our day under code names.

You know how it goes. We were all in our early teens, curious, young, filled with pubescent angst. Let’s call her M. She’s also from the Philippines, a few months younger than I was, and we liked the same things. That was enough. Very shortly after we met online, she moved to Canada. I would wake up early just to talk to her. She became a constant, and I became her internet boyfriend.

To ask about each other’s day every day was enough to send me to the moon and back. I downloaded Skype so we could see each other’s faces for the first time. I’d tell her about the music I listened to and she’d tell me about her struggle to adapt to the cold. I told her I wish I could hold her hands to make them warm. The yearning to meet IRL felt stronger every time we would talk, and when our Skype calls would be filled with dead air, the thought of being with her filled my mind. It burned my heart—or at least it felt like it. Blame it on the hormones.

The thought of never being able to meet as internet lovers played a big part in why we broke up. It was a crazy setup in the beginning, one that was never made to last. She ended up dating someone in her area, and I focused on  college.

The memory of what happens can never be distorted, because what is there will always be there.

But memory on the internet doesn’t work like ours. Every website that we have ever visited, every link that we have clicked, every interaction we’ve ever made online, is recorded. Everything we have ever done is stored in a server connected to all of the servers that make up the network of the internet. The memory of what happens can never be distorted, because what is there will always be there.

Read also: Lessons learned from an orchid and a lost love (if it is)

When I close my eyes, I am reminded of how lonely I really am. How lonely all of us are, despite living together with billions of people. Living in the 21st century, the world may feel as if it were getting smaller and smaller and smaller because of technology, but in truth, the distance is just the same. True connections can be made over the internet, but nothing feels better than having a face to see or a hand to hold.

True connections can be made over the internet, but nothing feels better than having a face to see or a hand to hold.

We remained Facebook friends, and after a few years we ended up talking again. There was a pattern: Every six months, we would catch up via Facebook Messenger, updating each other on what’s going on with our lives. We would share our college woes, and would always wander into the same question: “Are you dating anyone?” Oddly enough, sometimes, she would say yes, sometimes I would say yes, but never both of us at the same time. Of course, I could just check her profile. But I wanted to hear it from her.

As the internet found its anchors and became an integral part of everyday life, the connections I’ve made with people via the internet solidified and also translated into real life. The Facebook page community of a decade past is now found in the interest-based Facebook groups of today. Online dating was always and still is a big business, with not just websites but also dating apps available. Meeting online friends IRL, I would argue, has never been safer since the default anonymity of previous platforms is long gone. Which makes the relationships that were made before that much more valuable to me.

But back to M. The oddest, craziest thing happened last year: After a few missed attempts to meet in person whenever she would visit the Philippines, a family trip to Canada brought me to her town. Without giving all the details to my parents, I snuck out of the day’s itinerary to meet her. You think you know someone, given the years you’ve talked, but it’s really different when you see each other in real life. We went to one of her favorite restaurants, her university, and an indie bookstore. She was the only thing familiar in a foreign place.

Is it strange to hold on to something as mundane as conversations with internet strangers? Did the conversations mean anything to them as much as they do to  you?

But we both knew I had to leave. In the hotel lobby of where my family was staying, I told her we would see each other again. I don’t think she believed me. Despite all of it, I think eight years after we fell in and out of our idea of love was the perfect time to meet. We were on different sides of the world and for one day, our roads in life intersected. Sometimes that’s enough. Sometimes that’s all we can get.

Life on the internet can be one big party that doesn’t end, and sometimes you will find yourself looking at the people you miss out of pure subconscious desire. Everything was much more innocent back then. Is it strange to hold on to something as mundane as conversations with internet strangers? Did the conversations mean anything to them as much as they do to  you? Was it love? Maybe these aren’t the right questions to ask. Maybe they weren’t meant to have answers.

Job hopping, no matter how common that word is for fresh grads, is...