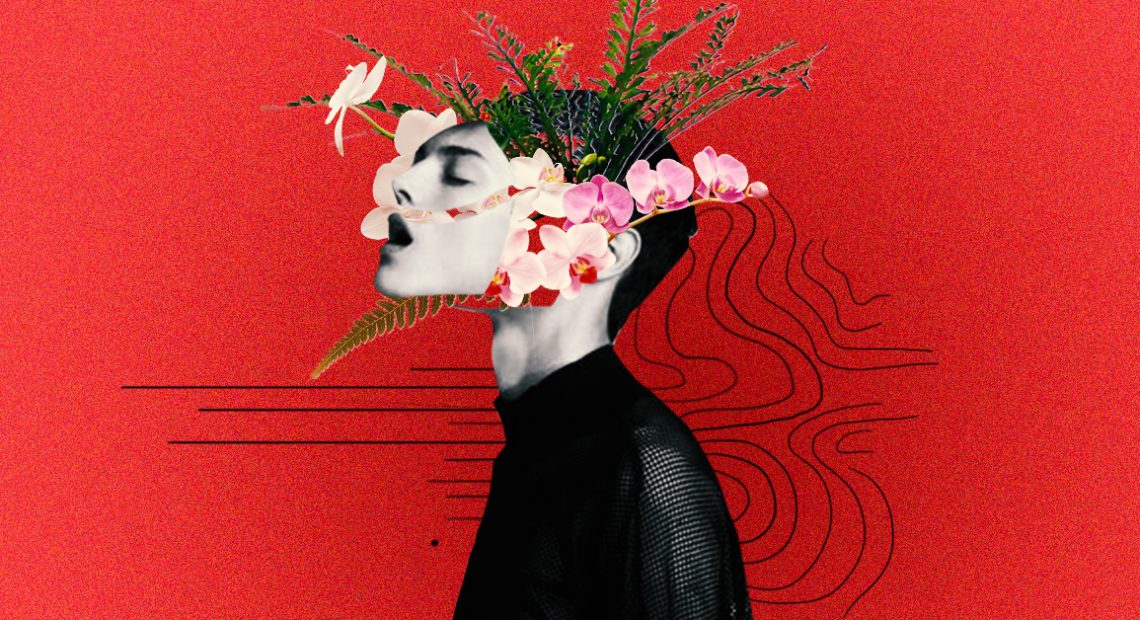 This Valentine’s we unpack the meaning of love through personal essays. Here, Oliver Emocling draws parallel between an acquaintance and his special attention to plants.

Nature has its way of declaring change. Dark clouds hover over the city—a melange of rusting roofs, cement, and some lush canopies make up the picture from above—before it rains. The flush of red malabulak (Bombax ceiba) flowers means it’s February. When the young shiny leaves shoot out from the bare branches of narra (Pterocarpus indicus) , it means summer has started. Then, a rain of its fragrant yellow blossoms and flower-covered gutters signal summer’s peak.

Before this short-lived floral exhibition, the tree’s foliage has fallen off its crown months ago, exposing the intricate ramifications of its mighty branches. The nakedness of the narra tells us that the air is cool without the breeze touching our skin. In this temperate weather, the falling of the tree’s leaves spells sorrow. For other species in the plant kingdom, though, this weather triggers a different kind of beauty.

In a city where the air temperature stays at 30 degrees Celsius or above for most of the year, this is the only time for the orchid Phalaenopsis schilleriana to expose its arresting beauty through its cascade of dainty pinkish flowers.

Also read:  How growing my own house plants changed my life

It was two years ago when a curious purplish bud poked out of the orchid stem, in between imbricate mottled leaves whose undersides share the same color as the bud. Its silvery roots hugged a moss-covered fern slab and hung by a wall at the garden. Naturally found in shady rainforests of Luzon, the orchid was protected from the midday rays of the sun by the extensive canopy of our neighbor’s narra tree. But by the time the flower spike emerged from the stem, the narra had lost much of its leaves. So, it must have been cold when I first met E.

I don’t know if I remember this because of E or if I remember him because the changing colors of my tiny garden are ingrained too deeply in my memory, carrying with it the memories relevant to each time. Perhaps it’s the latter.

“It’s a fern,” E answered when I asked him to identify the plant sitting on the table in front of him. E wore a gray shirt and dark denim pants, hair parted neatly perhaps with a pomade. “But what kind of fern is it?” I asked quivering voice.

”K-E-N-Z-O-I,” he spelled it out when I gave him a quizzical look after he said the word. He spoke each letter with care as if I were in a phonics class.

I have always been fascinated by ferns growing on mossy walls, but I wasn’t, and still not, a big fan of the Aspleniaceae family. The kenzoi fern, though, had an endearing neat structure. I bought it because of that. Plus, E’s cute and he made my heart leap.

I knew his name, his occupation, and the name of his cat (which I’ve forgotten already), but I didn’t particularly like the plants E liked. He liked ferns and some aroids usually kept inside the house. I didn’t like them as much as I liked trees anould give me an idea of a tiny aspect of his everyday life.

Truth be told, I didn’t—and I still don’t know—what to make out of that rush of extreme emotions I felt then. To me, it easily translated as love.

Days had passed. Like many potted orchids, I learned that ferns like shade and humidity. They also like to dry out in between. Unlike my orchids, the fern spent time on my bedside table. As he suggested, I watered the plant with a spray bottle every day. But one day, I devised another plan. I grabbed a pail of water and soaked the fern until the medium was saturated.

I figured that keeping the same plants wouldn’t ever acquaint me with any aspect of his persona, so I admired him from the screen of my phone. It was the closest I had ever been with E. Well, that was if the internet was fast enough.

Also read:  Enumerating the life lessons we can learn from plants

I may have not known the scent of his breath or the touch of his skin, but his presence on the digital world—where ferns are forever lush and orchids forever in bloom—made my heartbeat skip. Each like or comment he gave my post found a place in my tattered journal.

One night, he appeared in my head and my heart beat faster and faster until I had to crouch down and feel my chest with one hand. It was hard to breathe, but I liked it. “I have been feeling this kaba since I met E,” I wrote in my journal entry that night. The date was Feb. 5. It had been six days since I first met him.

Truth be told, I didn’t—and I still don’t know—what to make out of that rush of extreme emotions I felt then. To me, it easily translated as love. It was a feeling I thought I felt once, back when I was a boy who knew about love through TV shows. I thought it was love, so I kept whatever it was I was feeling inside me.

Living with orchids requires so much patience. It takes five years for an orchid grown from seed to reach maturation. The huge Grammatophyllum wallisii only flowers every three to five years. And the P. schilleriana, endemic to the highlands of the Philippines, only flowers when the cool nighttime temperature is sustained for several weeks. It’s a must to take several other orchids under your care so you don’t get bored.

In the case of the P. schilleriana, a bloom spike doesn’t always guarantee the arrival of its delicate inflorescence. This is what I learned when the orchid showed the slightest interest in flowering. I gave it icy mists in the morning as one of the members in an orchid hobby Facebook group suggested. Another member recommended placing the orchid inside the fridge, but with a huge orchid, misting with icy water seemed reasonable.

I fervently examined the spike’s growth every morning before I head back to my room to check up on the fern. They both grew so slowly.

When an orchid blooms, the inflorescence follows the light. It extends upwards until the buds fully open, pulling the top of the elongated spike down with its weight. This is particularly true for Phalaenopsis species.

I waited for the flower spike to grow longer and branch out like in the pictures online. It never reached quite the height, but I still hoped it would bring out even just one flower. It didn’t. The fern also didn’t budge one bit.

The daytime temperature shifted back to the usual along with the speedy return of bright green clusters of leaves on the narra tree. I took a thinner blanket, which remained folded under my pillow until it’s time to change the sheets. The P. schilleriana, too, liked the heat. A new set of leaves along with fat roots appeared.

The spike’s growth, on the other hand, was put to a halt. It was too short to reveal a pendulous exhibition of fragrant blooms. The cool air escapes the city too quickly—as if it’s hurrying back to a quieter space—to prompt the emergence of magnificent flowers. If the air had stayed cool for a little longer, the P. schilleriana would have revealed its gentle yet ravishing beauty. But in nature, rules are rules.

Flowers don’t always bloom the way uninformed minds expect them to. Instead of pinkish faerie-like blossoms, a new orchid had popped out of the bloom spike. Its leaves are mottled with silver and green exactly like its mother’s. This is perhaps the curse of taking the orchid away from its natural home.

The feelings we nurture deep inside us don’t turn out the way we want them to.

The extreme feelings I felt towards E him were just gone one day. It wasn’t unexpected. After all, the moments we shared were brief and limited to pleasantries. So, the attraction had died earlier before the curly leaves of the fern even dried under my care—Gosh! That little fern would have still been alive if I kept it outdoors under the Vandas.

Or maybe the attraction waned slowly like how the P. schilleriana revealed its offspring unhurriedly? Maybe that’s why I didn’t notice that I had stopped visiting his social media profile and the pages of my journal were no longer dedicated to him.

At a time when the narra must have been in full bloom, I wrote about E one last time. With black ink and a messy cursive, I admitted that I never had a way to distinguish what it was despite its strength. It was too convoluted, and it didn’t lend itself to recognition. “Memories of him made breathing difficult. It was hard living with the feelings I had for him, but it felt good. Suddenly, however, it was all gone like snow melting in spring,” I wrote. Still, I wished it stayed a little longer because I know I’d never feel this way again in years.

And when it comes to these strong feelings I’ve felt twice only, I like to wait not for it to grow and bloom into a garden. Instead, I wait for it to fade until there’s no trace left.

I like waiting, anyway. That’s why I took lab-grown seedlings of the coveted Euanthe sanderiana. I like to hear the ticking of the clock as I sit at the doctor’s office. I like extracting the seed out of katmon (Dillenia philippinensis), soaking it in a hydrogen peroxide solution, cast it on soil, and let three months pass until cotyledons poke out of the soil. And when it comes to these strong feelings I’ve felt twice only, I like to wait not for it to grow and bloom into a garden. Instead, I wait for it to fade until there’s no trace left.

Recently, days have been chilly enough for me to pull up a thick blanket up my chin even in the absence of an electric fan. The P. schilleriana and its offspring are attempting to grow a flower spike once again.

Waiting needs patience, but I can do away with expectations.

Japanese Prime Minister Shinzo Abe just had the best Olympics entrance of all...