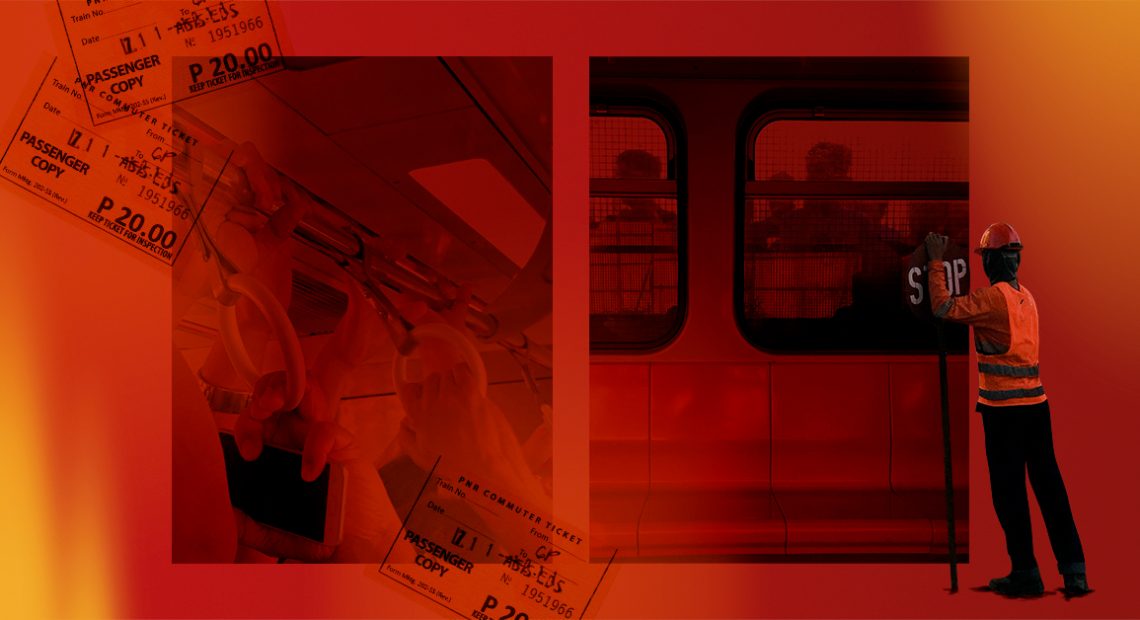 In 1990, the beloved Hong Kong filmmaker came here to finish his second feature film Days of Being Wild. Likewise, Leslie Cheung’s aimless Yuddy, the lead character of the film, embarked on a journey here in the Philippines to find his aristocrat mother.

The director and the fictional character are both in search for a sense of direction for an ending and for meaning two weeks before the film’s release in their motherland.

For some reason, the rather slow burning film picked up an action sequence at PNR’s Tutuban station after Yuddy refused to pay for a fraudulent American passport. With folding tables dressed in familiar vinyl covers and Filipino hooligans aiming their guns inaccurately, Yuddy and the sailor Tide (Andy Lau) jumped off the window. They ran on rusty roofs as the train let out an arrogant noise from a distance. Soon, they found their ending on board a PNR train. 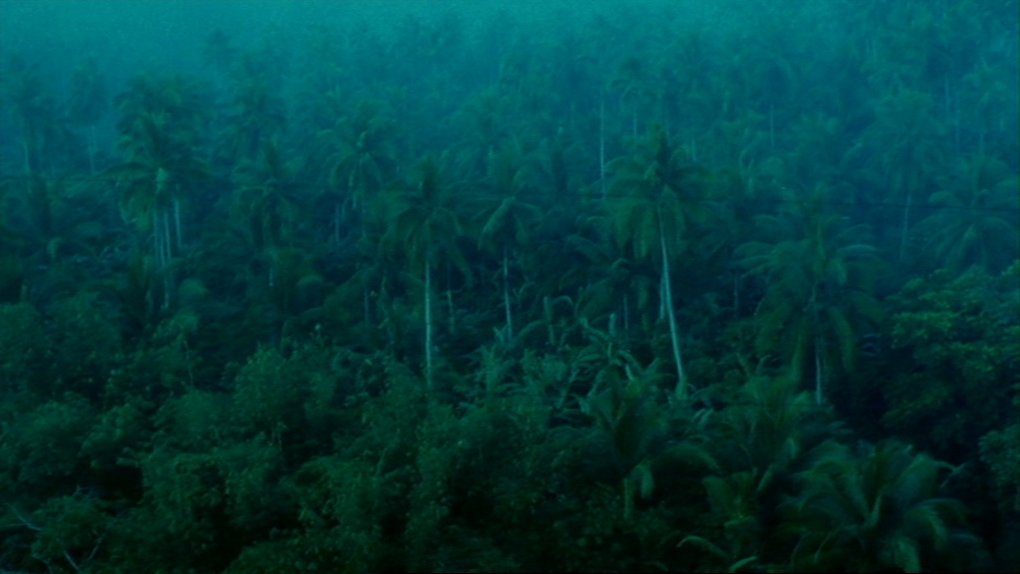 Still from Days of Being Wild

This train ride is the end of it all: The oblivious Yuddy remained uncertain until he was shot by an unknown assailant, but Wong Kar Wai, despite his tendency to improvise a lot, knew exactly what images to show.
In between shots of Yuddy holding on to life in what seemed a sweltering and maybe even stinking coach, the film director captured an enchanting, almost dreamy image of a verdant jungle (somewhere in Laguna, according to an  article from Rogue’s Nov. 2017 issue) as the train passed by.

Twenty-eight years after filming Days of Being Wild, so much has changed with the railway system. For one, the original Tutuban station has been turned into a shopping center. Typhoons have damaged networks of railroads, leading to the suspension of routes to Southern Luzon. Much of its downfall, including the discontinuation of Northern Luzon segments, is a result of years of neglect. Despite its long history (tracing from the Ferrocarril de Manila of 1890s) and attempts of bringing it back to its former glory, the PNR has been in a constant state of decline. And if we didn’t take it for granted, it could have been our best transportation system. 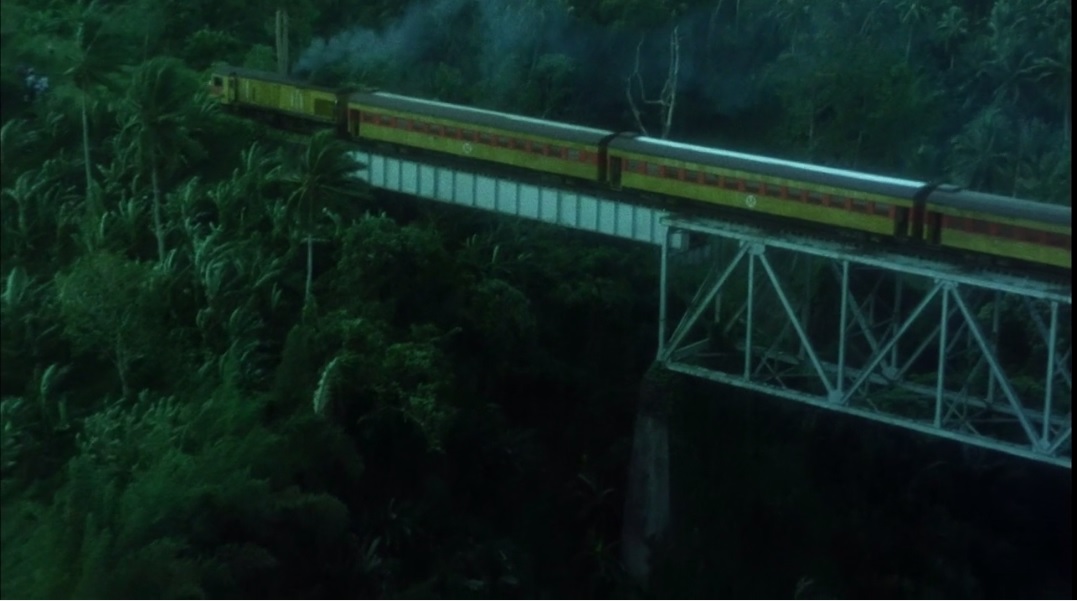 Still from Days of Being Wild

My closest encounter with the railway system is when the jeepney I ride from Taft crosses Osmeña Highway. I never really cared about the PNR until the launch of its Malabon station on Dec. 4. The new station follows the re-opening of the Caloocan stations, which has been closed for about 20 years, in August of this year.

As a resident of Malabon, this means I can go to work and go back home with just one train ride sandwiched between two short walks. That, aside from working in Quezon City (not the Eastwood side, okay?) or somewhere near, is the dream!

Before the launch of Malabon station, my best option was an LRT ride. It has gotten better mainly because my work starts at 10 a.m., allowing me to skip the long queues in the morning. To get to our office in Makati, I spend an hour and thirty minutes to two hours on the road with a total cost of P62. Meanwhile, the PNR only takes about 45 minutes at only P20—yes, a two-minute tricycle ride in Makati is way more expensive.

I’ve heard bad stories about the PNR (e.g. a video once circulated online showing the train running with doors open), but with this promise of convenience? It’s a done deal.

The PNR station along Governor Pascual Avenue in Malabon isn’t quite like a train station. You’d find the station under the NLEX-SLEX connector road. Hidden behind galvanized iron sheets, a tarpaulin of the sparse train schedule and an audio recording of the current train routes playing on repeat are the only indicators of this new station. They, too, are unnecessary. After all, there were train tracks here decades ago. 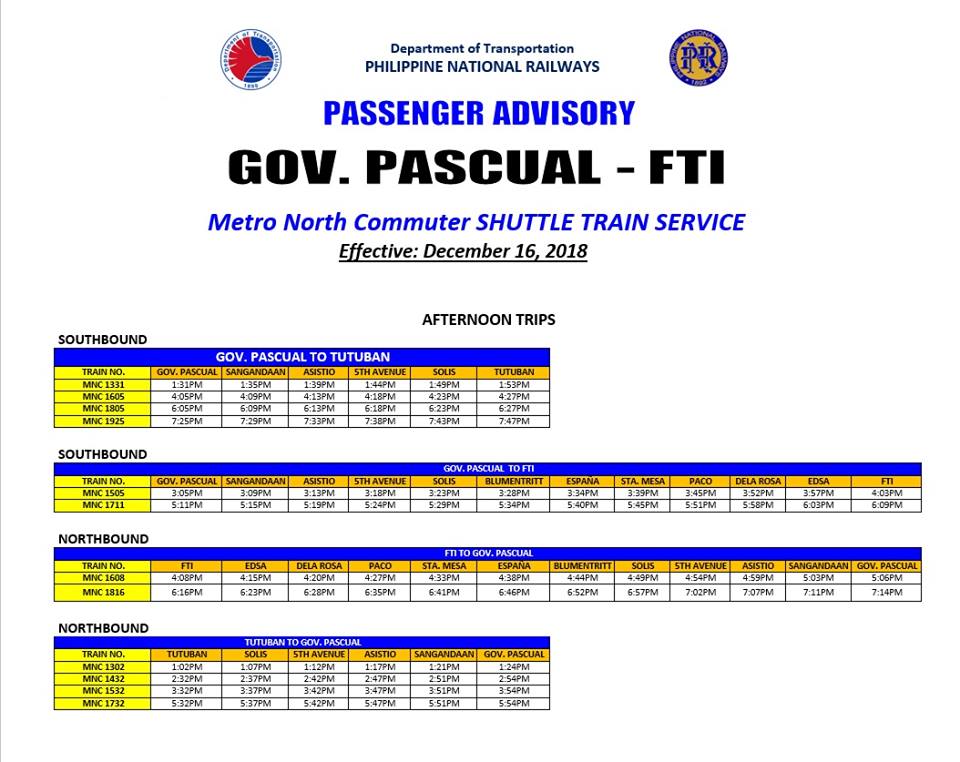 The guard is stationed at a collapsible plastic table right beside the ticket booth. The ticket booth in fresh blue paint is just slightly larger than the dusty portalet across the road. The elevated platform where the train loads is short; perhaps, an indication that the opening of this station has been rushed. Commuters fill up the tiny waiting area fast, making it seem like lines are long even when they aren’t. 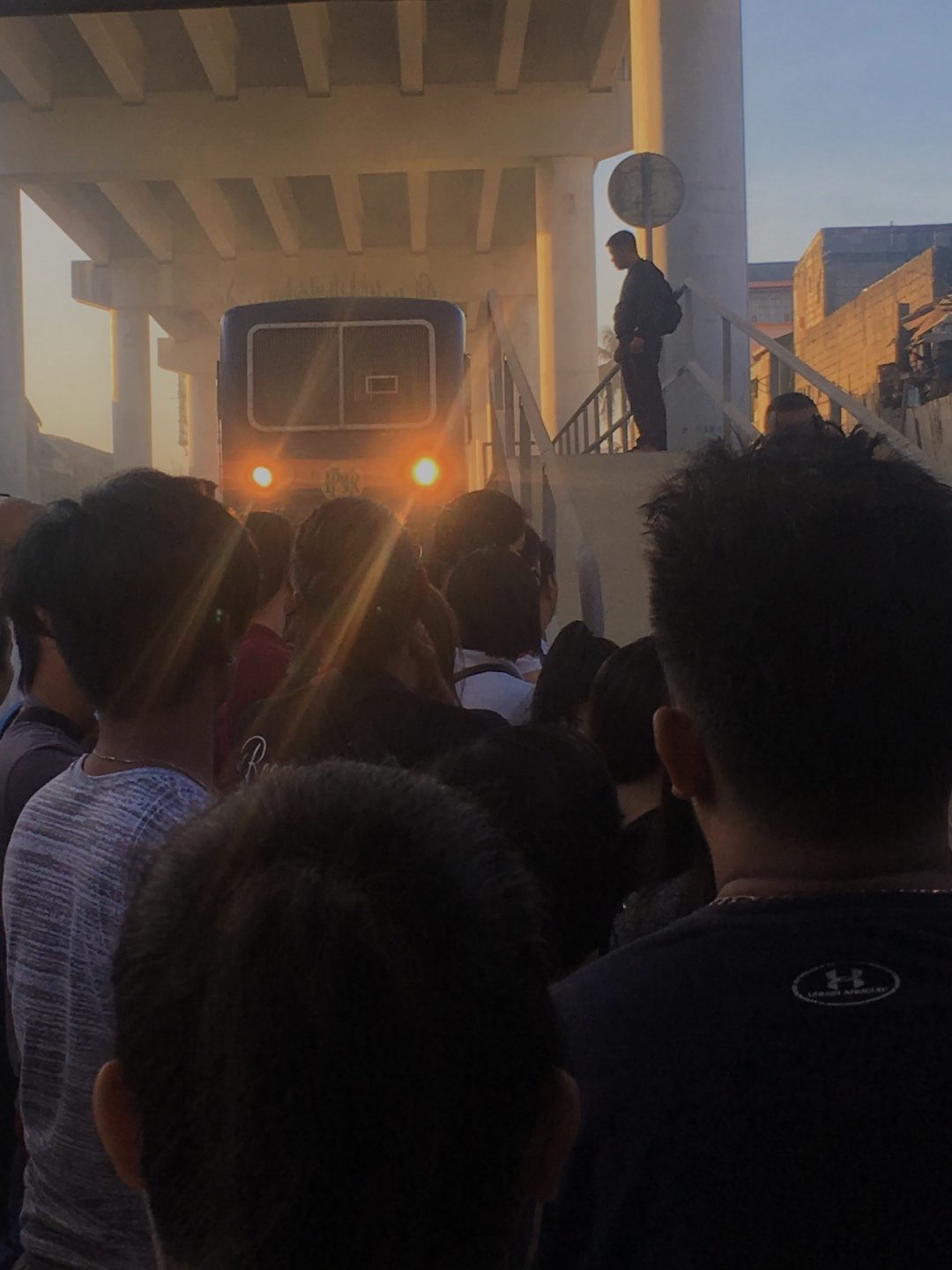 There’s little comfort here. It’s as if this space knows that people come and go. Dust is everywhere as with any space where construction takes place. Once fine particles form a thin film over your phone screen, it makes you want to leave. And that’s fine. No one wants to stay here for so long. No one likes waiting.

The train arrives at 7:03 a.m. As usual, its arrival is pompous. It almost feels too arrogant when it reaches the station with its elephant-like whimpers. For few seconds or maybe a minute or maybe more, its engine goes quiet. Passengers alight and hastily find their way down the ramp where the new passengers have lined up. 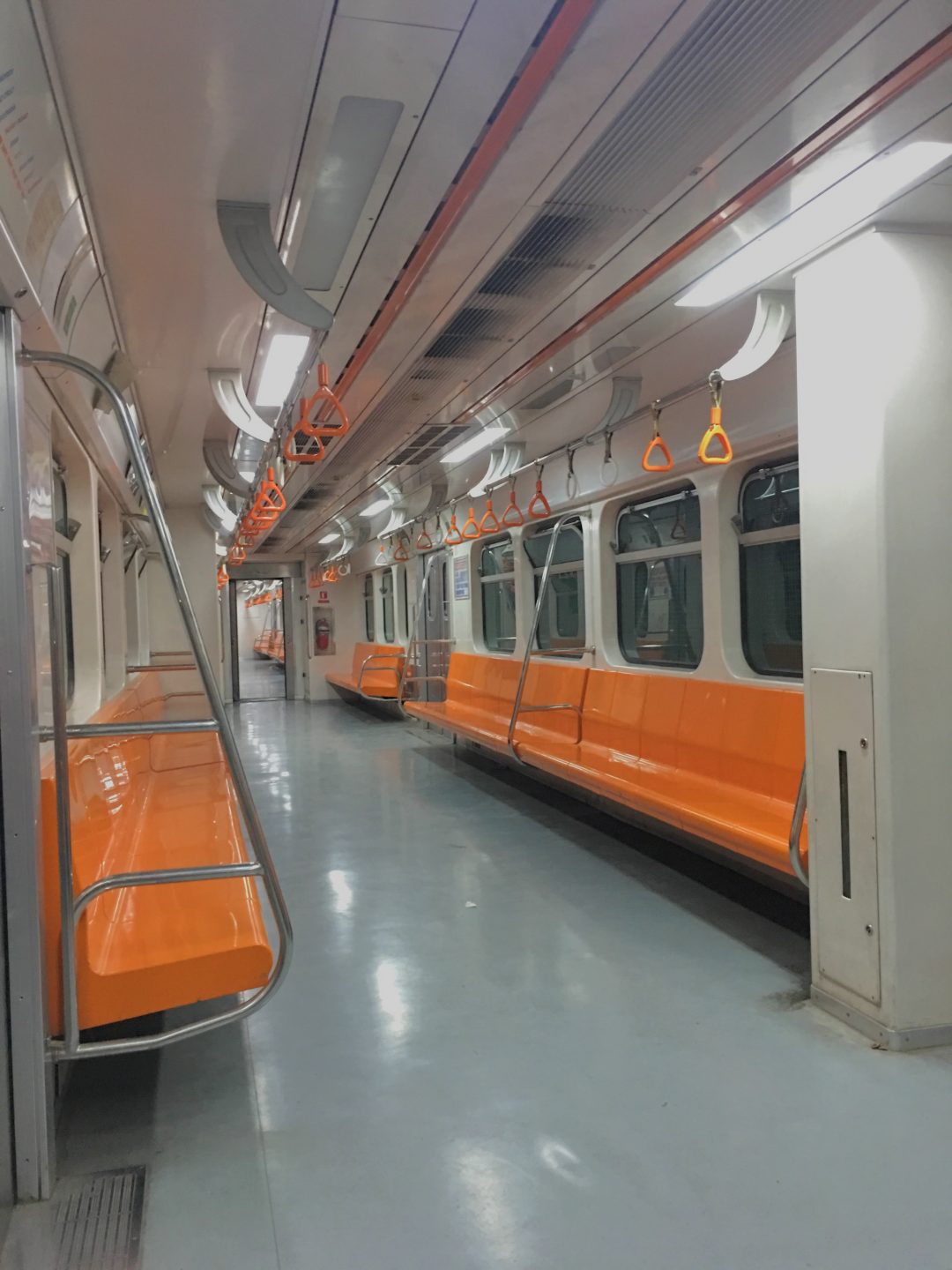 There’s order when you take the train at the first station. Perhaps it’s because there’s no need to worry about chasing a comfortable spot. The platform is short, and you’ll have to enter through one of the first few doors to get to the front coach.

Unlike the cold, intimidating sense of its exteriors, the inside of the train exudes a rather welcoming energy. It’s spacious and it’s cold enough. Even if you choose to stand and hang on to a Galop d’Hermes-esque safety handle, you won’t break a sweat. Or maybe it’s really just because of the orange motif? 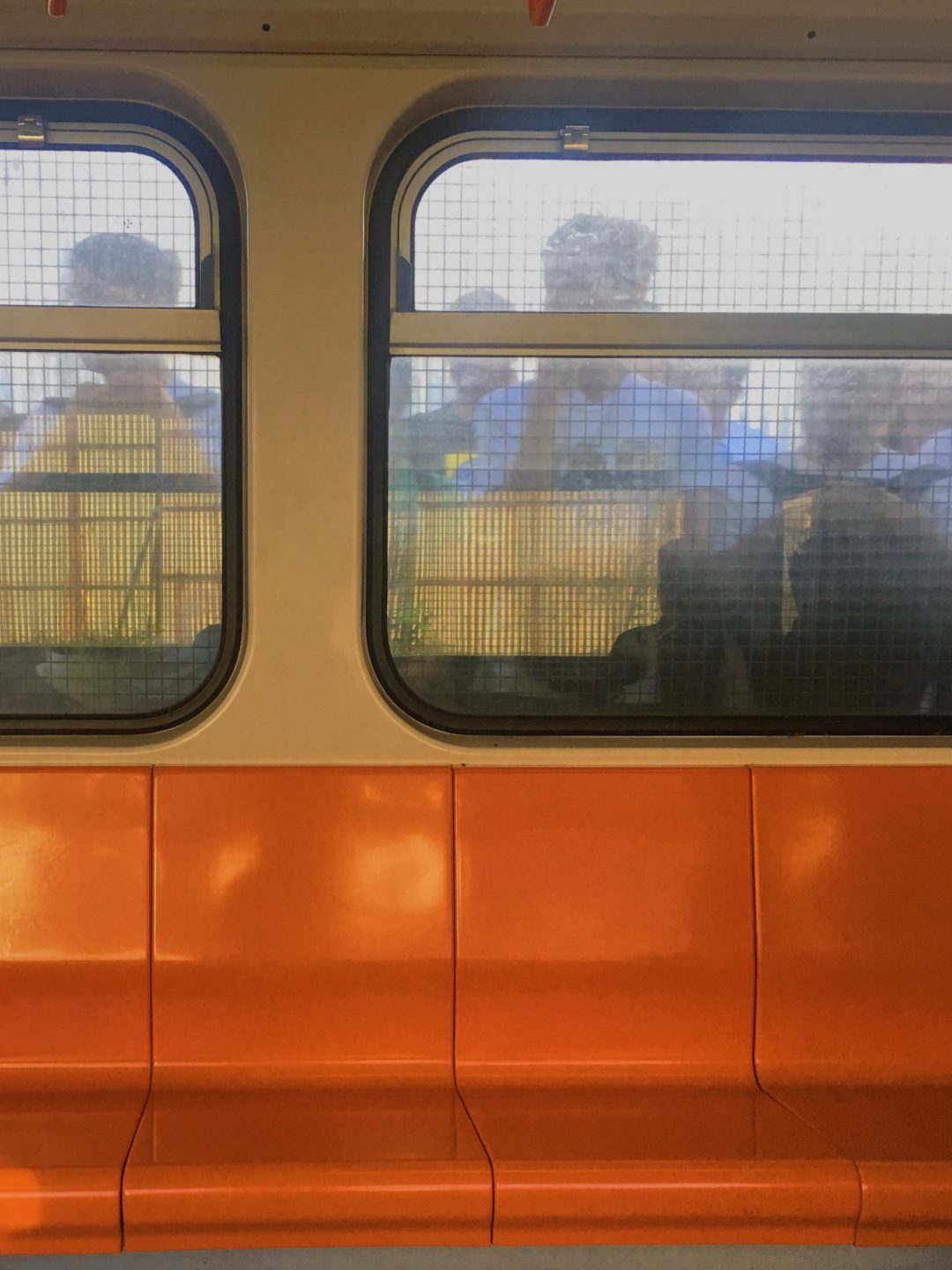 By the third or fourth station, the train gets full. And when it reaches the fifth station, skin contact is inevitable. But what’s the point of complaining? We’re all just trying to fit in and move through cities. And this, by far, is the most convenient and comfortable means of transportation for most of us. 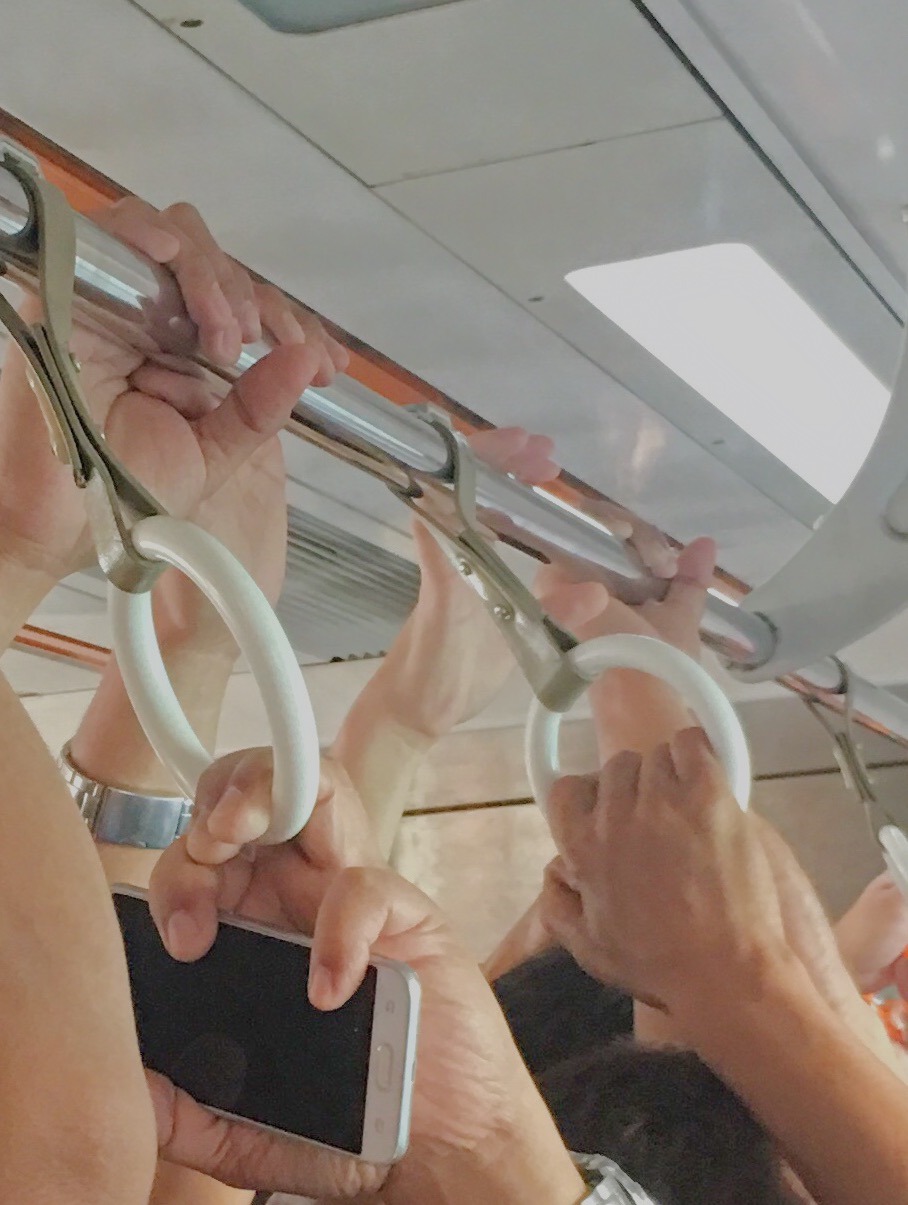 Scenes from the train

The train is an intruder. It passes through the urban jungle (or even the serene tropical jungles of Southern Luzon as seen in Days of Being Wild) almost without courtesy. To some degree, it disturbs the humble life around it. But is it still an interruption when the noise has become constant?

In the morning, you’d see people peek out their windows with a mug in their hand, others water their plants, and some bathe out in the open. Between the tracks or wherever possible, weeds, vines, and even big-leafed colocasias grow. In fact, like the community surrounding the railways, they survive and maybe even thrive. To a certain point, a PNR ride feels bucolic. 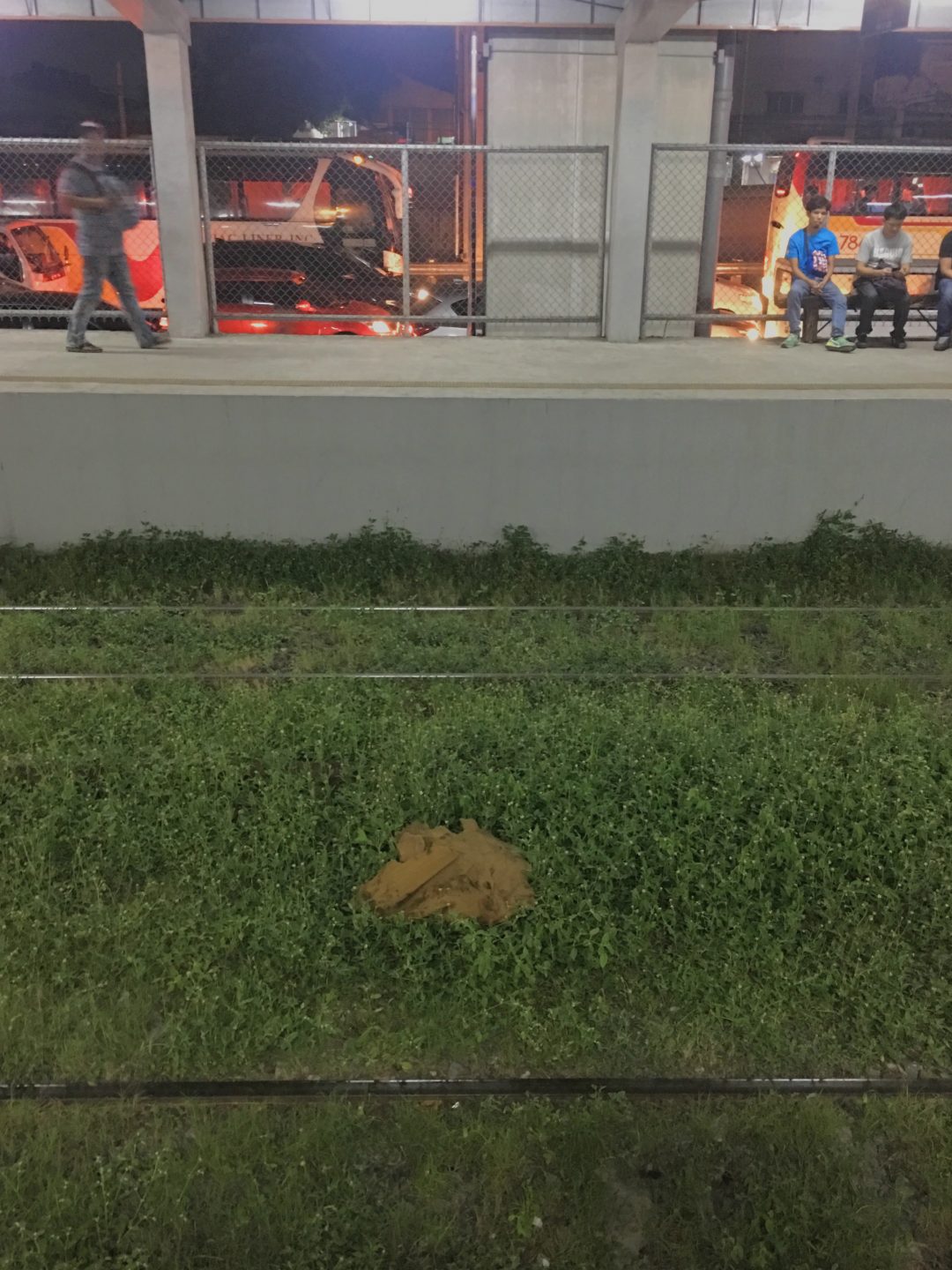 So much could be said about the life around the metropolitan route of the PNR. Like, in many ways, it’s a case of poor urban planning. However, the very life around it is what sets PNR apart from our other train systems.
When you ride the PNR, there is some sort of intimacy that doesn’t just come from the fact that we are in a packed train. It’s an innate sense of intimacy that springs from the system itself. Since trains are scheduled, the people on the train today are most likely the same people you rode with yesterday. Like, the grandmother who scolded me when I heedlessly walked straight to the priority area. Or that group of friends who called me a “human CCTV” for taking photos of the train the first time I tried it. 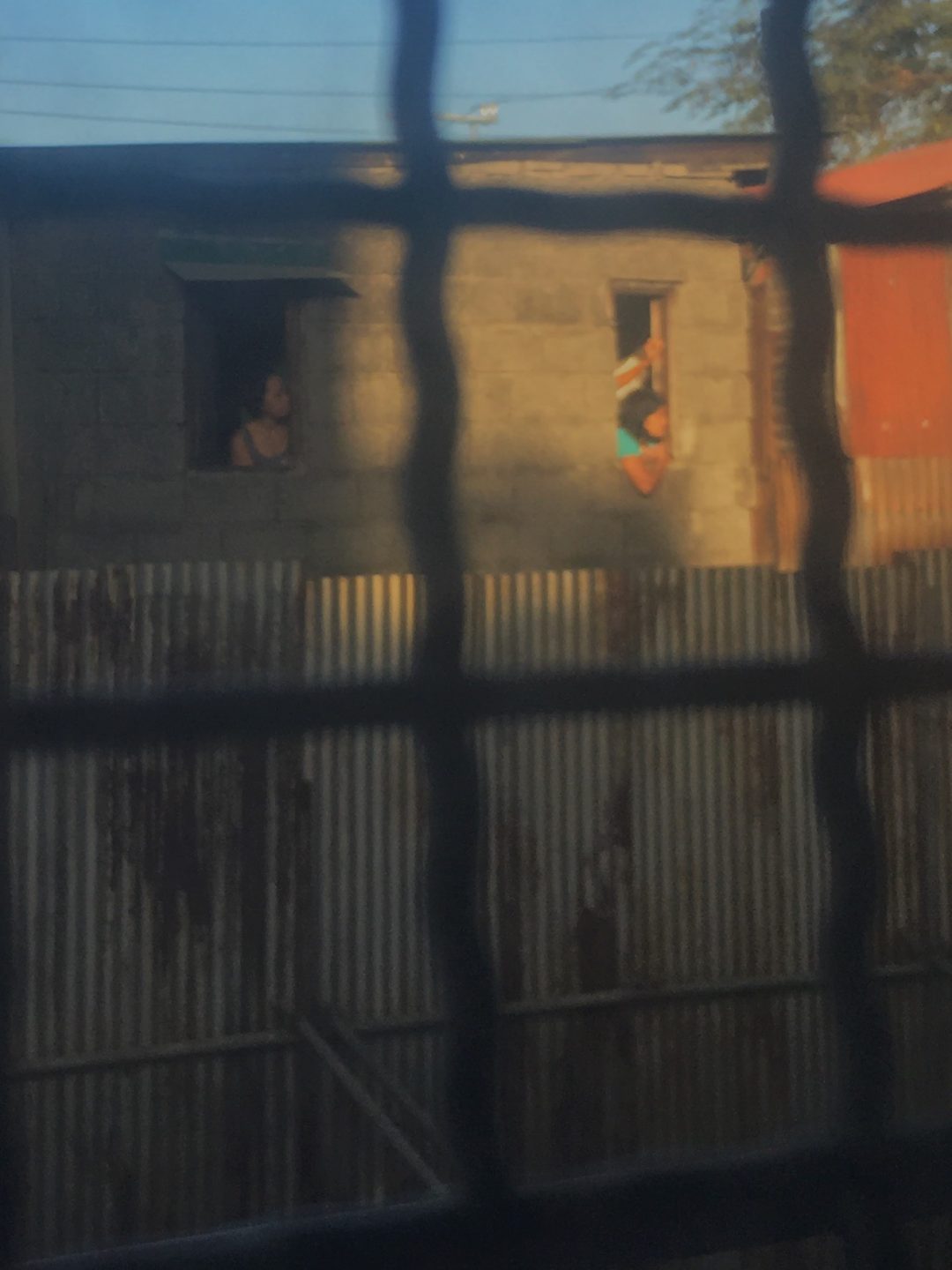 Much of the sense of intimacy, however, comes from the train’s contact with the ground.

The scenery along the metropolitan route of the PNR isn’t as majestic as what briefly appears in Wong Kar Wai’s film. The railway system acquaints us to the nooks and crannies, the innards of Metro Manila. If you had the chance to step off the train in the middle of two stations, you’d find yourself a few steps away from shabby homes, a furniture workshop, or maybe a basketball court—the abundance of courts along the railroad is proof of our fondness for the sport.

The train arrives at Dela Rosa at exactly 7:58 a.m.

From here, it only takes a two-kilometer walk to get to the office. I love walking around Makati because of two reasons. First, tricycle fares in this city costs twice the PNR fare. Second, it acquaints me to the roads of this strangely unfamiliar city. Even if I work here, I can’t feel a sense of belonging in this city. 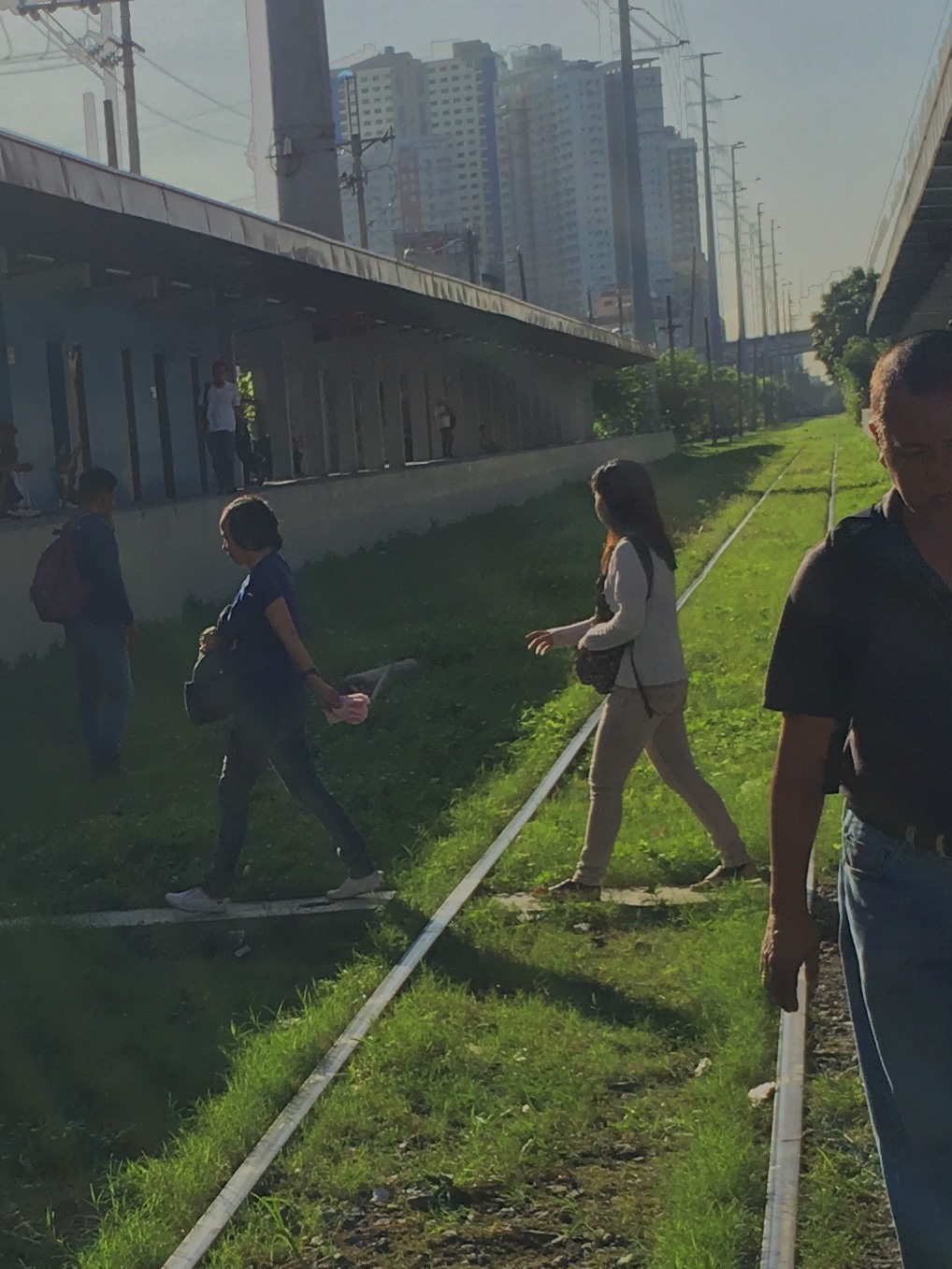 It’s the most convenient means of transportation I’ve tried, but it’s not perfect.

In fact, Wong Kar Wai remembers the PNR for a mishap.

“It’s a very long night,” the auteur recounts in the book WKW: The Cinema of Wong Kar Wai. “Now, we knew we had about two hours to pass through the jungle and another hour to reach Manila. And we were supposed to stop at a station before the jungle and get a shot of the assassin boarding the train. But at some point, one of the train staff yelled at us, ‘No more next station!’ and the next thing we knew, the train was already in the jungle! The stop before the jungle had been cancelled without any notice! I even used that line in the film.”

So far, the train has always stopped when it’s supposed to. Trips have also left as scheduled—thanks to the generally good weather earlier this month. But to be honest, I just really wish it could be more accommodating. 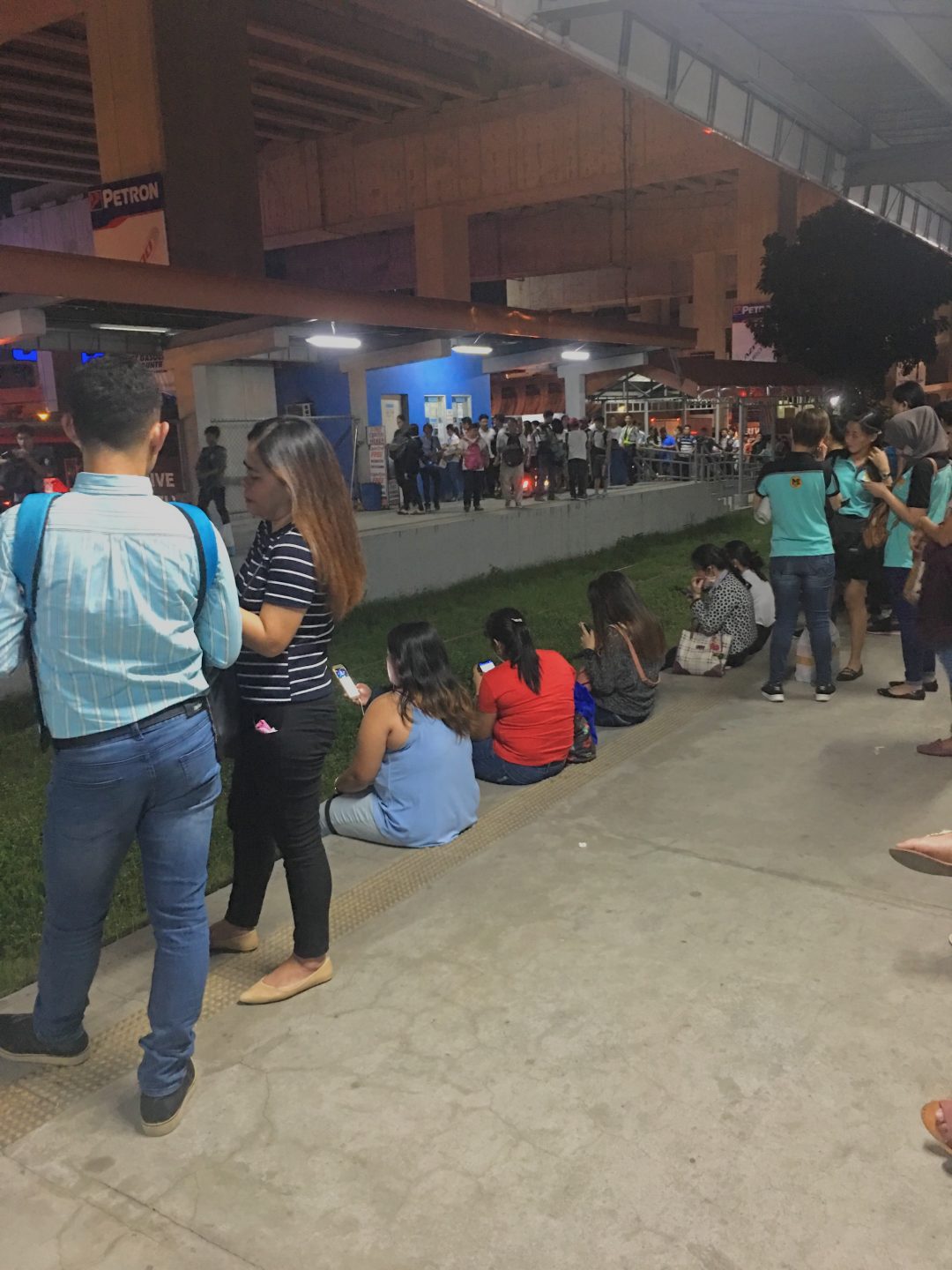 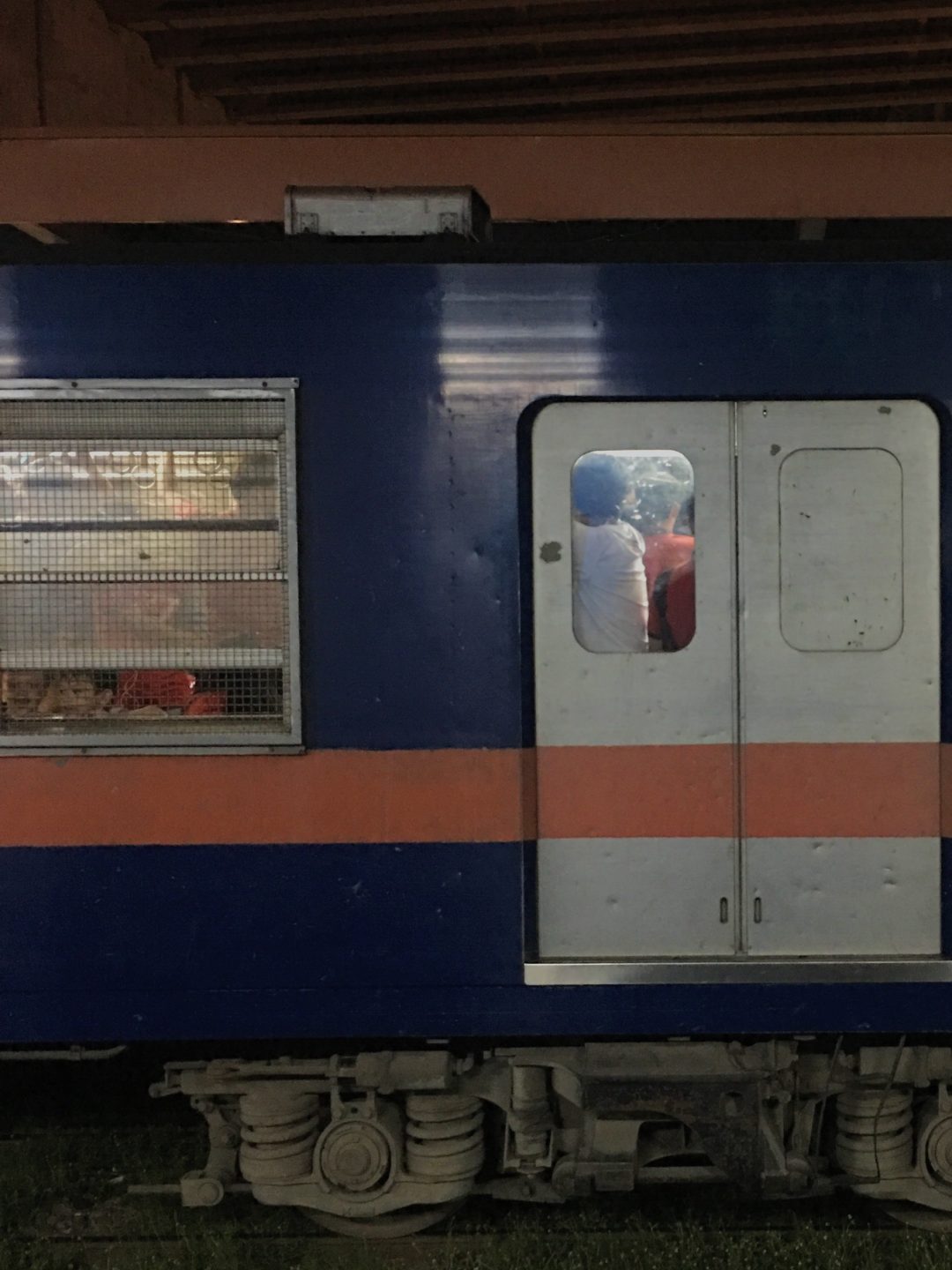 As of now, the last train leaves at 6:28 p.m. For someone who clocks out at 6 p.m., I have enough time to get there maybe 10 or 15 minutes before the scheduled departure. Still, there’s no assurance that I’d get on board because of passenger control. When I asked for the schedule of the cut-off, the guard on duty told me it simply depends on the load of passengers taking the train. Of course, you’d have to base it on your gut feel.

The train tends to get hot at night, too. It’s not the type that makes you sweat profusely, but it’s the heat that seeps in through your eyes first before your skin. Then, it makes you feel tired. When you’re inside a packed train full of bodies who toiled throughout the day, it’s just natural for the air of exhaustion to circulate. But for bodies yearning for respite, as long as this train saves us from the infamous Manila traffic, this will do.

On the evening of Nov. 28, Filipino dream pop duo Outerhope divulged the intricacies...