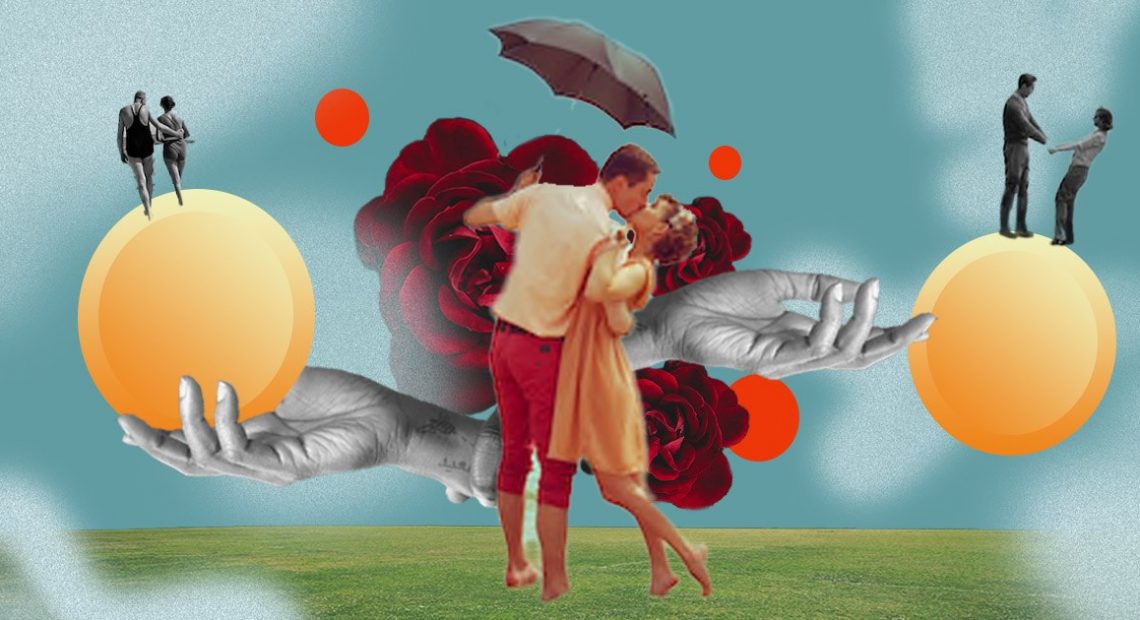 Picture this: It’s a Saturday night, you’re flipping through a streaming service, and there appears the category “Guilty Pleasures.” You have your usual suspects: “Bridget Jones’s Diary,” “Love Actually” and a whole selection from the Nicholas Sparks cinematic universe. For short, romance.

Guilty pleasures and romance go together like marathon movies and weekends, so much so that they seem intrinsically linked, almost synonymous to each other. “Guilty,” because you’d sooner delete your watch history than confess you’ve been sobbing to “The Notebook” in your spare time. “Guilty,” because you’ve been taught that the romance genre isn’t as highbrow as an Oscar-bait film, or mildly acceptable enough as the next “Mission Impossible” installment. “Guilty,” well, because romance is too girly.

The romance genre has been the subject of much derision in storytelling, be it in novels or cinema. To shun narratives as simply being a love story is one way to say that it has no artistic merit at all. In the world of cinematic and literary discourse, romance is the running gag. Director Erik Matti made waves on social media due to his comments on K-dramas, tweeting that these are “faux Cinderella stories with Belo-fied actors whiter than white. And it’s all about love in the midst of this pandemic.”

Website Romance Rehab cites several times when the genre has been the subject of critique: The New York Times ran a story that spoke condescendingly to readers of romance novels, while the Business Insider boils down to shaming sexuality: “No one really reads romance novels for the plot. Instead, it’s all about skipping to the ‘good parts,’ if you know what we’re saying.”

In the case of its storytelling, critics pinpoint to romance’s formulaic structure with its meet-cutes and happily-ever-afters. But not much has been said about the crime genre, which follows a formulaic structure in the same way. In a journal article “The Romance Publishing Industry and Its Reputation” written by Lauren Cameron, the author cites that crime comes with a predictable pattern of its own: “There is a crime, there is someone trying to solve it, there is a conflict, the false suspect, and then the true criminal.” It just doesn’t receive the same kind of backlash because it’s a male-dominated genre, therefore acceptable. So, is “formula” really the problem here?

In the world of cinematic and literary discourse, romance is the running gag.

In all likelihood, the problem may lie in what romance stands for. Most of the time, it’s written by women for women, making it a so-called feminine genre. Romance’s pages—and screen time—are powered by the female gaze, laced in female fantasies. The genre has women coming to terms with their sexuality and desire, while framed by their perspective. And for some reason, society polices that just as much as their minds and bodies.

Romance novel authors like Sarah Wendell mentions that romance is self-actualization. The genre has also evolved from the typical bodice-rippers, with recent authors bridging the gap between romance and the “high culture” sort. Take for example novelists like Sally Rooney, who takes the genre to another turn by capturing young love in its rawest form in her novel “Normal People.” There’s “The Time Traveler’s Wife” by Audrey Niffenegger, which plays with fantasy and science fiction elements, without having to sacrifice both romance and literary merit. More recently, there’s “Eleanor Oliphant is Completely Fine” by Gail Honeyman, a romance still driven by its female protagonist, and “A Love Story for Bewildered Girls” by Emma Morgan, which talks about love stories in all senses—LGBTQ+ relationships, female friendships and love for yourselves.

In all likelihood, the problem may lie in what romance stands for. Most of the time, it’s written by women for women, making it a so-called feminine genre. Romance’s pages—and screen time—are powered by the female gaze, laced in female fantasies.

It’s true, not all romance stories are created equal. Criticism is valid when it comes to certain books. On the other hand, romance books of the past are considered canon in literature. Think of the Brontë sisters with “Jane Eyre” and “Wuthering Heights,” or the whole author page of Jane Austen. Just as how Shakespeare catered to the mainstream and the “lowbrow” during his time, it’s now considered high culture. There’s something about time that distances them to us, turning them into something revered.

But now, the very label of romance still gets snubbed, because of that assumption that recent works are all trash. Novelist Jennifer Weiner says, “It’s sexist when critics automatically relegate anything concerning young women’s lives to the beach-trash dumpster bin—especially when they’re automatically elevating anything about young men’s lives to the exalted spheres of literature.”

When a movie, show or a book is snubbed for being just “a love story,” there’s a knee-jerk reaction from me: So what if it is?

It’s because of this reason that teenage girls get shunned for liking books about vampire romances (artistic merit notwithstanding), or how “strong female characters” are doomed to chaste, loveless lives. An older view of romance is that it’s “anti-feminist,” since it eventually ends up having a woman riding off to the sunset with her lover. According to some scholars, romance may just be a form of “subversive feminist literature” because it’s “a genre written primarily by women, for women, and about women” who are looking for “personal, emotional and physical fulfillment.” It’s the female experience without the barriers.

Women are denied their own desires and looked down upon for having them. And if they do engage in male-dominated genres, there’s gatekeeping to be dodged, as seen in the gamer girl discourse or with women being questioned for their enjoyment of comic books.

When a movie, show or a book is snubbed for being just “a love story,” there’s a knee-jerk reaction from me: So what if it is? I honestly hope there’s some love involved in all stories—because really, thank god for romance.

Read more:
It’s okay to like ‘Twilight’ again
According to Princess Carolyn, a strong woman is also a fragile one
The “fake nerd girl” is a huge sexist myth