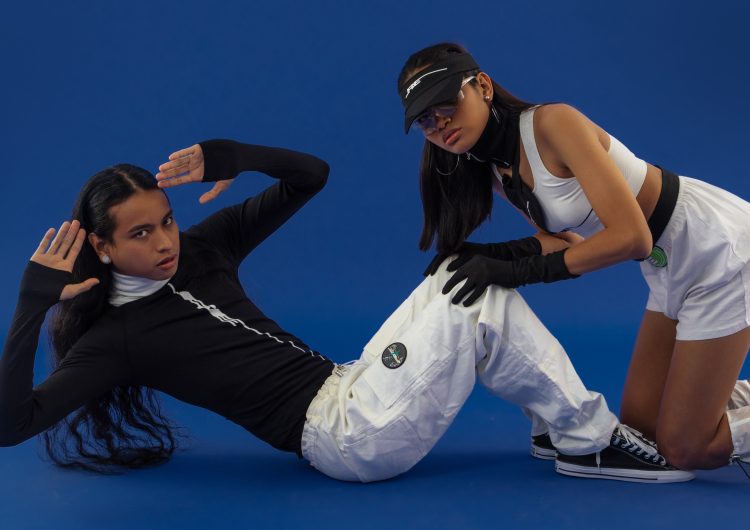 Reconstruct Collective is a young Dutch all-girl fashion collective who teamed up after finding out that their school wouldn’t fund their graduation show. They produced their first fashion show through the help of crowdfunding, and two and a half years later, their designs  have made their way to New York Fashion Week for the second time.

Their body of work is a harmonious, versatile blend of functional sportswear centered on a very DIY spirit. All of their clothes are unisex and involve a lot of fabric manipulation that allows them to be reversed or interchanged to great effect.

When she visited relatives in the Philippines last December, Reconstruct co-founder Alyssa Groeneveld told us more about the frenetic energy their collective carries while shooting some choice pieces from their collections.

i-D described Reconstruct as “extraterrestrial.” Does that idea apply to all of your collections?
The interview with i-D [came after] we had released a collection based on outer space. That’s why they said it like that. We are from a country where fashion isn’t really a focus. In a way, yes, we are doing it ourselves. People [who want to get into fashion] have to do it themselves or go to another country. We just graduated and we were super broke, and because we got the opportunity to start our own brand, we thought that if we put all our strengths together, we’d be really strong. Since we’re doing it our own way, we’re different from other designers. No offense, though; we look up to them.

“We are aware that it can be difficult, because we’ve been through so much. We trust people, and I think that’s the main point of working together.”

Some of Reconstruct’s designs deal with already existing pieces. What’s Reconstruct’s approach to design? How do you determine what you want?
Reconstruct isn’t just a state of mind. [With] how we reconstruct materials, we also thought it would be cool to show brands what we can do for them. We first started with Converse as we know someone who works there; it ended really well. We want to do it with more and more brands, especially with their overstock. That’s usually what we go for. Working together with other brands can work really well [for them] in making new context.

Is it intentional that Reconstruct is comprised of all women?
I think it’s meant to be, but also all of the boys dropped out of our class. Most designers are men, and we’re really happy to add more  diversity.

Do you have any insight on how Reconstruct works so well as a collective?
We actually started with nine people, then three people left. We are aware that it can be difficult, because we’ve been through so much. We trust people, and I think that’s the main point of working together. We all have different roles in the company. We let everyone do their job. We don’t involve ourselves in each other’s tasks.

Do you have any general tips for fashion brands who also have the same dreams as  Reconstruct?
Just believe in yourself; that’s what we did. We didn’t know how to run our own company, but working together was the key. We all have different strengths: One of us is really good with textiles, another is really good with marketing. With the strengths together, you also really need to be confident. Having a network—connecting people—is also key. You meet a lot of people, and you shouldn’t be scared. Just dare yourself and make the best out of it. And you also need quality to show, of course.

By Danice Abril Illustration by Maureen Gonzales Did you ever feel like an...

If you’re over the physically exhausting trick or treating (you have stopped eating...