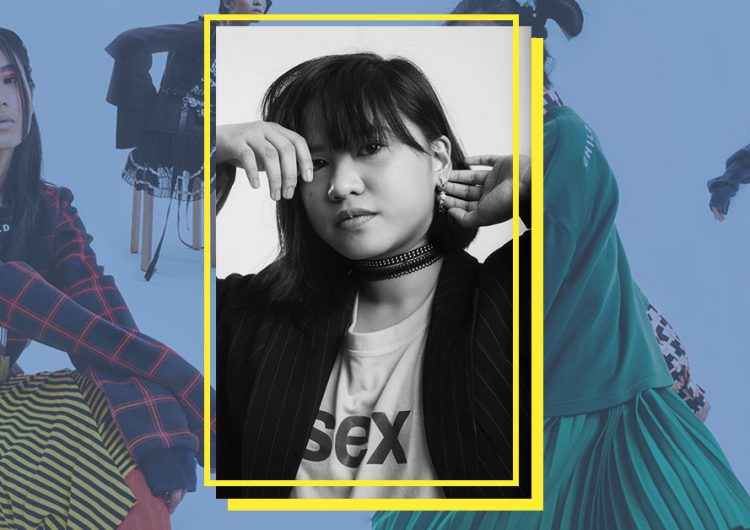 Sex. Fuck. Vagina. These words effortlessly flow from the lips of Laguna-born Pr()blem Studios fashion designer Jenni Contreras, as she explains the meaning behind the blatantly graphic words slapped all over her 30-piece debut solo collection. “They’re words that people here in the Philippines [think of as] a disease or something, when they’re actually natural and one of the many beautiful things in the world,” she asserts.

Unabashedly aware of the provocative nature of her self-expressive designs, Jenni reveals that her clothing isn’t a direct reflection of her personality. Behind the loud colors, bold prints, luscious frills, exaggerated shapes, and multi-layered seams is another budding designer who’s waiting to come out of her shell. She admits, “To say that I am sure of who I am as a designer—no, I think not. I’m still at that stage of trying a lot of things. It’s still a work in progress. Ang hirap kasi my clothes are really loud, but I’m actually pretty shy. Did you know that at parties, I have to get drunk to socialize because I can’t socialize when I’m sober?”

Her collection, “Problem Child,” was inspired by Romina Ressia, Fly Art Productions, Cecilia Azcarate memes, and Stanley Kubrick. She stitched the pieces over three consecutive weekends while juggling a 9-to-5 job, eventually winning herself a ticket to Tokyo courtesy of the Bench Design Awards 2017. The 24-year-old’s designs were shown on the runway of last year’s Amazon Fashion Week Tokyo. Now that she’s ditched her day job and taken on Pr()blem Studios full-time, she dives into the world of fashion head on.

Where did the name “Pr()blem Studios” come from?

It’s actually supposed to be “Problem Child,” but I checked and there were already two brands named “Problem Child” and friend ko pa ’yung isa. So, I took the “problem,” added “studios,” and made the “O” look like a vagina. Everyone thought it was an open and close parenthesis because I’m open to collaborations. Well, pwede rin, but it’s meant to be a vagina.

So you named your collection “Problem Child” instead?

Yeah. “Problem Child” because I think that everyone, at one point, was a problem child or wants to be one. Like, “Fuck it, I’m going to do whatever the hell I want!”

So, were you a “problem child” as well?

Nung college ako sa [De La Salle-College of St. Benilde], lagi akong late sa classes ko. I exceeded the allowable absences. I didn’t even know how I fucking survived, and I was a scholar too. You can ask any of my professors. I skipped classes. I was always late. My plates were mediocre. Nagseryoso lang talaga ako nung fourth year na. Sa grad show na lang. My collection then was kind of like my collection now: Renaissance. Renaissance x Punk, specifically. The concept was; what if Anne Boleyn was living during the ’80s?

I watched a movie called The Other Boleyn Girl and became obsessed with Anne Boleyn. I’m very fascinated with her. She’s such a badass. She was notorious. She was one of the wives of King Henry VIII. And she was sort of like a fashion figure during that time because she had a different way of wearing her clothes.

Is that “notorious” or “rebellious” nature something you instill in Pr()blem Studios?

I guess it’s part of the DNA of the brand, but I’m not trying to be rebellious. It’s more a reflection of how I grew up, who I am as a person. It’s a reflection of me, so I think it just comes naturally.

Well, my parents are liberated. When I lost my virginity, my dad was the first one to know. He’s like my best friend; I tell him everything. On our way to church, I told him that I lost my virginity. I was 16. My parents talked to me about sex at an early age. I have a gay brother and a bi younger sister, so parang my family’s kind of very open. We talk about sex, we talk about that shit. I mean, alam nila sex life ko. It’s natural kasi it’s not an issue sa family ko. We weren’t afraid of saying things sa parents ko, that’s maybe why we grew up like this—very open to people, walang limitations.

What can you say about people who might find your designs offensive?

I don’t really blame them because it’s a common reaction. As long as they don’t condemn me or shove their beliefs down my throat. I’m not shoving mine sa faces nila. Parang, “You’re such a bad person because you’re doing this sa clothes mo.” Just as long as they don’t do that. It’s kind of a mutual respect thing. I respect your views, you respect mine, we’re all good.

Have you ever thought that maybe your clothes might not be for here?

I want to sell in Japan talaga. Like, when you go out, is it common to see people wearing fashionable clothes? No diba? In Japan, you see them every day. Ang hirap kasi dito eh, sa Philippines. Kasi no one’s going to buy my clothes here. Let’s be honest. Siguro some, but it’s just a small market. But fashion is and always will be a business first and dito sa Philippines ang hirap. I want it to be a global thing. Eventually, I want to expand more. I don’t think my brand and my clothes are for here. I’m making an online store, a website for my clothes. It’s not going to be launched yet. Pero I’m also looking to sell these particularly in  Japan.

Yeah. I would want to make clothes for here, but not for this brand. I have a couple of collaborations lined up this month and I’m actually thinking of studying in Tokyo. By the end of the month, I will be releasing a ready-to-wear brand for women with two of my friends called Bad Rags. It has this cool ’70s vibe. But I’m not going to stop for [my] brand. I’m also doing a collab with an artist under Pr()blem Studios. Hopefully, we’ll release in March.

Your next reads are Ricky Lee’s free online screenplays

Missed your chance to get schooled by master screenwriter Ricky Lee in his...