JP Velasco is a self-made man. In hindsight, he might seem like every young creative in the Philippines, trying every field that interests him. But something is compelling about this creative 19-year-old. “Oh I forgot to tell you,” he quipped after our formal interview. “I’m not only a designer and a painter. I also make music and I’m trying filmmaking as well.”

JP taught himself everything he knows, while providing for himself as well. He started making beats by fooling around on Garageband, got into filmmaking by borrowing a friend’s film camera, and eventually painting after discovering Jean-Michel Basquiat.

Grabbing what he can find from ukay-ukays around the city, he merges unlikely pieces into one, finding coherence in chaotic patterns.

“I actually hated painting and art before because it felt so structured. It had to be so precise, and intricate, so I hated it. Like, why is it so neat? I wanted to mess it up,” he recounts how the painter inspired him. Jean-Michel Basquiat’s influence isn’t limited to JP’s paintings, it also bleeds into the seams of his new clothing brand.

Named after his birthday, 02-24 serves as his personal project. He’s the designer, the marketing head, the tailor—he’s in charge of everything. And just like every skill he has, he taught himself how to embroider and sew his own pieces. 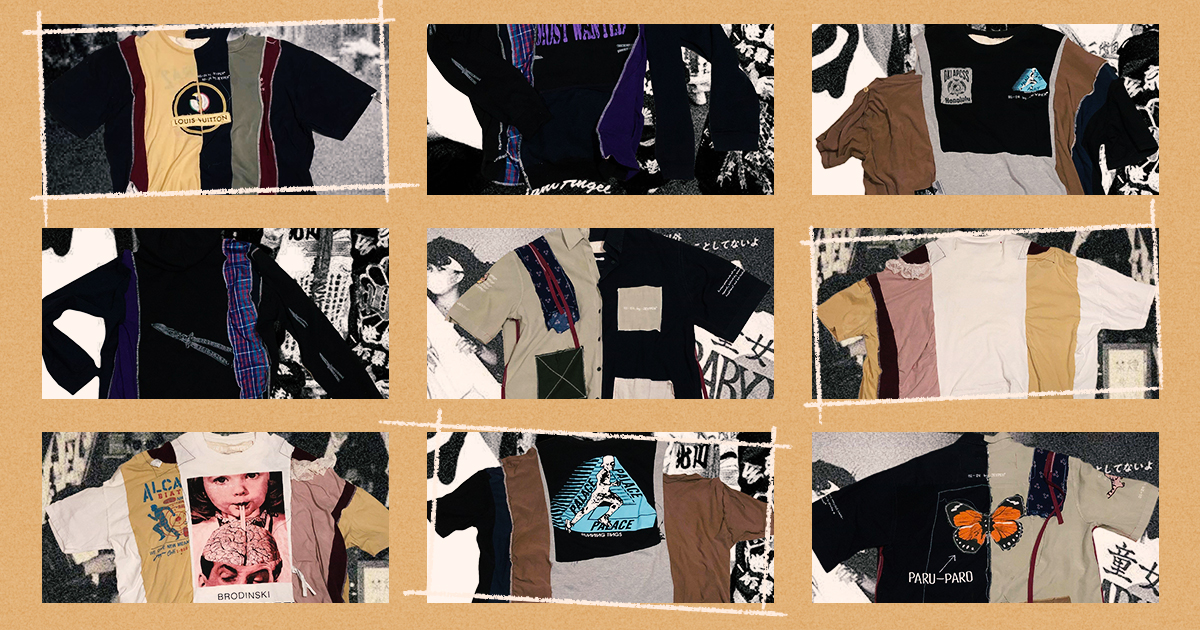 He learned by asking and observing tailors from his neighborhood. Through their help, he brought his pieces to life through his own hands. “02-24 is more of my experiment, like my baby. I’m learning how to sew the clothes and embroider it myself, how to cut the garments precisely, and which pieces would fit together,” he tells us.

The pieces under 02-24 are all upcycled clothing. Grabbing what he can find from ukay-ukays around the city, he merges unlikely pieces into one, finding coherence in chaotic patterns. It’s a play on structure and form with prints acting as secondary priority.

02-24 officially launched at La Fureza last Jul. 26. Through an old Hyundai van and a lemonade stand, JP’s late-night pop up for his first capsule is DIY realness. People are copping and reserving his pieces since the drop, while his close friends in the scene like Aly Cabral are getting pieces customized by him.

We caught up with JP and talked about his relationship with fashion and art, meeting passion and practicality halfway, and where he sees Filipino youth fashion heading.

What have you been up to recently?
I’m making my own clothes right now out of recycled clothes that people don’t use anymore, and make them more out of this silhouette that kind of represents my personality. It’s chaotic yet precise.

Are you studying fashion right now or is it something you’re passionate about?
I really, really want to study right now, but I don’t have enough money yet.

How did you get into fashion, or art, in general?
I used to study business management at UA&P, but I didn’t enjoy it. I didn’t want to be a businessman. Then, I started painting in 2017.

“I don’t know who made this construct that fashion is binary, that ‘skirts are for women, suits are for boys.’ I dress up to be able to express who I am.”

Art is something I didn’t enjoy before. Before, I thought art is supposed to be precise and clean. My perspective changed when I found out about this guy named Basquiat. I think I found him on Google. I started watching these documentaries, and I was inspired. I was like, “Yo, these paintings? They represent me.” So I started painting shit like that.

Could you tell us more about your personal style?
It’s kind of like expressing myself. If I don’t wear the clothes that represent who I am, it feels like I’m dressing up as someone else. It’s like dressing up in a costume. I couldn’t imagine myself being in a suit and tie every day.

Fashion’s supposed to be non-binary. I don’t know who made this construct that fashion is binary, that ‘skirts are for women, suits are for boys.’ I dress up to be able to express who I am. It’s a way of being free.

Who or what inspires your taste in fashion and design?
A lot of local artists in the Philippines inspire me, actually. I got to give them credit, like Jason Dhakal, Rainiel Moraleta, and I fucking admire Bryan Sochayseng, man. I haven’t met him yet, but I bet he’s a cool guy.

I also admire people I encounter everyday. I see construction workers rocking their shit. I see old ladies dress up with their baggy trousers, their loose blouses, and their New Balance sneakers with their tote bags. That’s how I found out about tote bags by the way, from lolas. Old ladies here in the Philippines did that.

How did you come up with 02-24?
My first capsule was more of a trial and error basis, but it went well. I got a lot of positive feedback, like from you guys, but I also had bad feedback. I’m not gonna lie. People were saying “That shit’s trash. That looks like a rag.”

I was actually planning this project for a long time. Before my current brand, I made a brand with a couple of friends, but it didn’t work well. 02-24 is my deconstructed, reconstructed type of vibe for these types of silhouettes I tend to make. Once I study soon, hopefully, I can make better, more intricate garments.

That’s what I aim for: to inspire other people, like what other local artists did for me. Hopefully, people who’ll buy my clothes are also creatives trying to do their thing.

“But in the end, I see everyone in the local [fashion]scene progressing, going up, reaching their goals.”

As a 19-year-old designer trying to make it, where do you see youth fashion heading?
Before I was part of the scene, y’all were doing pretty good already. There are ups and downs. But in the end, I see everyone in the local scene progressing, going up, reaching their goals.

The Starving Artist was an unknown brand before, but now they’re pieces are sold out. Same goes with Wednesday. Royalty used to be a meet-up thing, but now they have their own spot in Bratpack. DBTK also used to be like that.

Isn’t following your passion harder now you’re providing for yourself?
It’s not easy, honestly. It’s a struggle. But in the end, I promise you it’s all worth it. The feedback you get from people, the reactions you get from the designs you make or whatever you make—songs, or art, or whatever. It will all pay off in the end.

Don’t end up out here with just having concepts in your head, unable to execute them. Just try to do whatever you think is right. Do what you love.

There are recent reports that a tiger from Bronx Zoo in New York...