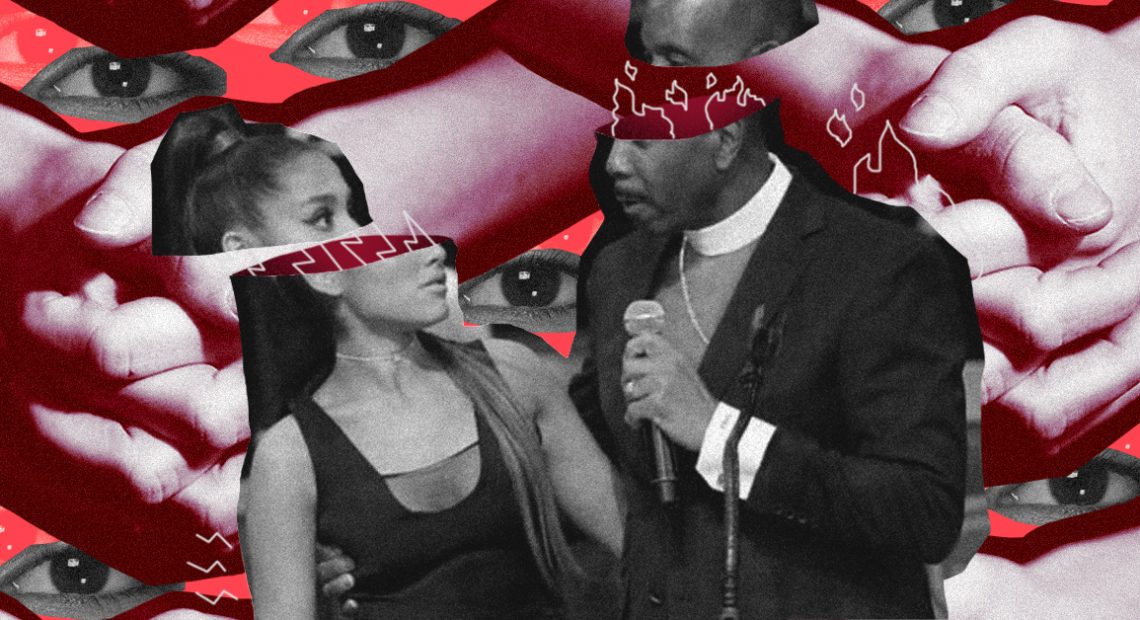 I was sick when a bishop harassed Ariana Grande in everyone’s full view during Aretha Franklin’s funeral. The video, which went viral on Twitter, triggered fans and people on the internet to express hate against Bishop Charles H. Ellis III. He quickly apologized and later claimed he was only being friendly. Talk about half-assed.

Supporters made known their support for Grande through #RespectAriana. Because she kept silent about the incident, some questioned whether she really felt uncomfortable. There were those who insisted the singer should have said something if she were really bothered. Otherwise, she “let it happen.”

This reminded me of a similar experience I had while working as a part-time table server at a Makati bar. Nights went by; some quiet, some rowdy. Customers came and went.

My job was not just about serving tables. It also meant dealing with intoxicated customers, cleaning up after they barf and getting unsolicited and intruding “compliments.”

In one event, a man in his mid-30’s, well-respected in the local art scene, entered the bar. I’m still not sure what he does for a living. All I know is he always comes in with a crowd, orders an obscene amount of alcohol and walks around groggily as if he’s king of the club.

I was manning the door that night for a gig. Bands played out loud, giving him authority to speak millimeters away from my ear. After a few questions about the event, which I answered professionally, he started getting personal. He asked about my age, why I worked there. Soon he was gliding his crotch up ands down my leg. Up and down, up and down. It went on for a minute before I had the courage to stand up, get out of the bar and pretend to look for friends.

After a few questions about the event, which I answered professionally, he started getting personal. He asked about my age, why I worked there. Soon he was gliding his crotch up ands down my leg.

What happened there? Why didn’t I slap him right away? Why didn’t I cause a scene? He surely deserved it if I did. But I didn’t. I froze.

Ariana Grande, a pop star watched by the world, froze solid like I did. She felt what I felt if not worse–considering all the pressure that’s probably in her head. There’s PR, management, and a Christian community in Aretha Franklin’s funeral. There’s Hollywood watching her as she awkwardly shrugged off the harassment.

Let’s stop making this another case of victim blaming. It’s normal to freeze and I’ll let you in on some things that go through our heads when harassment happens.

Many would say that she, being a feminist icon, should have done something, I’m one to say it’s understandable that she didn’t. It doesn’t mean that she wanted it, nor does it mean that she let it happen. Let’s stop making this another case of victim blaming. It’s normal to freeze and I’ll let you in on some things that go through our heads when harassment happens.

Second guessing / “Maybe I was overthinking.”

“Did he really just do that? Who would have the guts to do that? Maybe I was overthinking. He was probably dancing to the music, but he can’t dance for shit so it felt like he was harassing me.”

When harassment happens, there is a shock. It doesn’t matter if it’s the first time, second time, or nth time. There was a voice inside my head that second guessed what just happened. It’s as if I were in a nightmare and I wanted to slap myself out of it. Except it was real.

I heard a lot of harassment stories and there was this realization that because of the a-hole in front of me, I am now one of the victims. It wasn’t fiction. It actually happened.

Fear of invalidation / “What if they don’t believe me?”

“Okay. Let’s say that just happened. But what if people don’t believe me? What if he says he was simply being friendly and puts the blame on me? Will I embarrass myself?”

There’s a fear of invalidation even if I were the victim. I took into account his power as a customer and as a well-made man. Meanwhile I was a small table server easily subject to invalidation by his crowd and his influence.

In that situation, I was a feminist surrounded by strangers whose reactions may vary. I could have been victim blamed if I slapped him in the face without hearing his explanation first. On top of that, my bosses cared about the business. If I caused a scene, it would have meant losing customers and possibly damaging the name of the bar I worked in.

It’s so easy to encourage girls to act immediately but I couldn’t seem to have shaken off this fear of invalidation.

Accustomed to silence / “Maybe I can just forget about it.”

“If I don’t speak, this will blow over. It was only a minute after all. I mean, he didn’t rape me or anything. Maybe keeping it silent is the best way to avoid drama.”

When it boils down to doing something right after harassment happens, being accustomed to silence is a factor that can freeze victims solid. Sure, if I spoke up on the Internet, people would have backed me up.

However, I was in a bar in the Philippines where being a woman meant joining the long-drawn fight for equal rights. Considering I have been silent my whole life, how do I know when it’s time to speak up? Perhaps there’s also trauma in others that drive them to stay silent instead? It’s some kind of damage control, when it shouldn’t be.

I know, the questions out of reflex can easily be answered. However, when you’re there, it’s hard to even think straight. While there are some feminist heroes who literally smack their abusers straight in the gut, there are also girls disabled by their fear, anxiety and trauma. This doesn’t mean, however, that we should invalidate the people who blanked out in the face of abuse.

Weeks after getting harassed, I blamed myself for not causing a scene. I didn’t give him what he deserved which was yet another anxiety on top of what had happened. I felt like a disappointment for I always thought I was brave. As time went by, I realized I shouldn’t have in any way redirected the incrimination towards myself. It is not my fault that I reacted that way.

Society should stop victim blaming those who freeze. These girls didn’t just “let it happen.”

No, I am not encouraging girls to be silent. To hell with it, be as loud as you want because you have the right to. However, society should stop victim blaming those who freeze. These girls didn’t just “let it happen.” They also did not “want it” or “paved way” for it to happen.

We are at the point of gathering courage to fight patriarchy and sexism in loudest way possible. After years of misogyny, flipping the coin doesn’t happen overnight. There is novelty even in the smallest steps.

Don’t fret: It’ll be available on PS4, Xbox One, Nintendo Switch, *and* PC

SHAREIn between the rack of IDEA tees and a display of a Geoff...