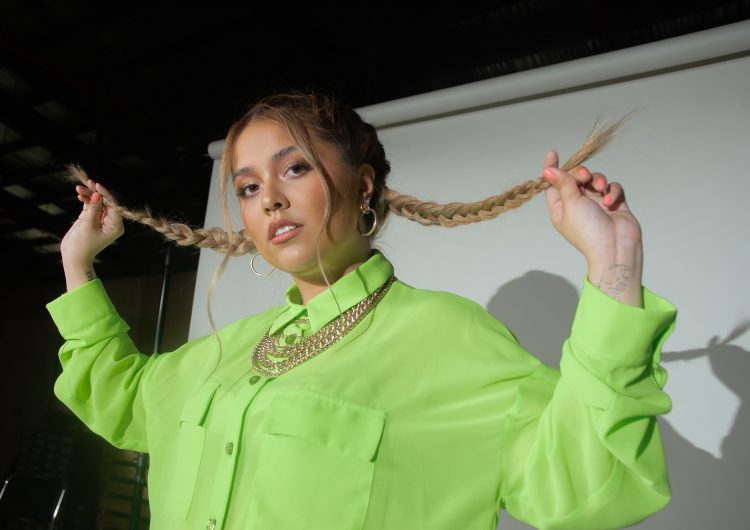 Within the span of a breezy interview, a handful of spontaneous glam time conversations, and a guerilla warehouse shoot one Tuesday morning, we’re convinced that Tiana Kocher is a pop R&B artist to watch. She dances, styles her own looks, plays soccer, and most importantly, is a White Chicks fan like all of us. (“I’m gonna have a BF!” is her favorite line.) That’s besides her impeccable singing voice, which was trained constantly throughout her childhood in Manila, and then through her performing arts degree from the UK, and now through her nonstop rehearsals and performances as an up-and-coming artist in LA. From the looks of it, she’s got the makings of a star.

We sit down with her two days before her first show in the Philippines. As the opening act for A$AP Rocky at Xylo this Apr. 4, her Manila debut is already pretty hard to beat. She’s not sweating it though. For Tiana, performing is just about having a blast with her passions and her team-turned-family. That’s probably why our conversation hopped seamlessly through everything she adores: from her favorite thrift places in Manila, to her attachment with her dogs (we’re already in love with her corgi, Lil A$AP Ferg), to her upcoming EP, which centers around love. She’s in it for the fun, and most of all, for the love of it. 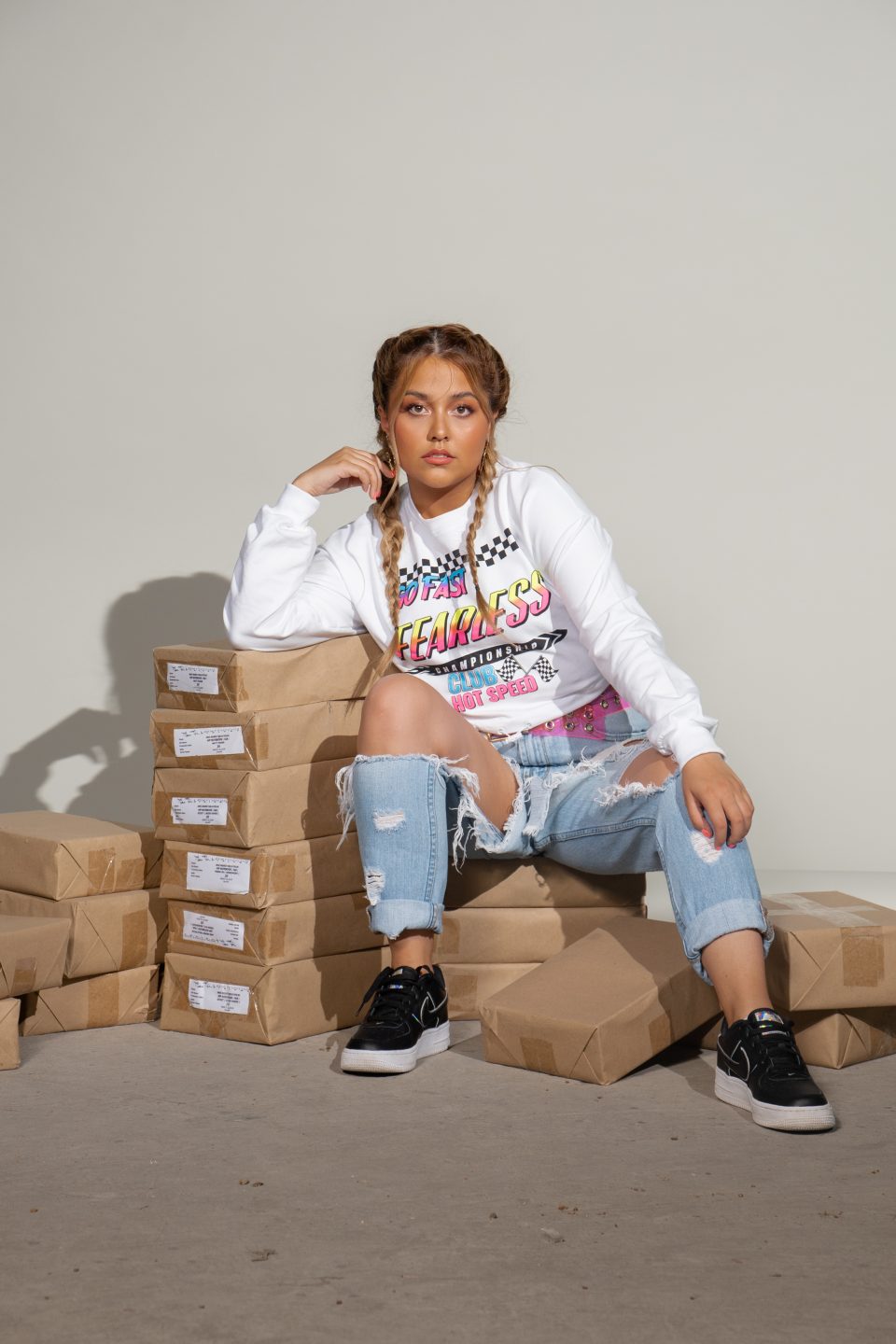 So, I did a little stalking on your Instagram and I saw on your story that you were out and about having fun last night. What does an off day look like for you? It seems like you’ve been busy flying everywhere.

Yeah. When I have an off day—oh man, that’s when I have an off day—we actually just hang out. Like my whole team and I, I have them over, we have game night every weekend. It’s important. It’s like literally our lives. We just compete against each other and it gets really competitive like [when we play] Uno, and we stop talking to each other for like five minutes… but just five minutes though. Living in LA, there’s a lot of things to do. Sometimes we’ll go to Disneyland, or Magic Mountain, or go to the beach, but when I actually have an off day, the first half of the day, I actually just try and spend time for myself. I’ll do errands, or I’ll just take a bath, or I’ll watch some Netflix.

I also know that you’re Manila-born but now you’re LA-based. So what’s the backstory on that?

Well, I was born and raised here. [I] went to school up until high school here; I went to Brent. And then I moved to Cambridge for two years, studied musical theatre, and after that, I moved to LA and I’ve been there ever since. So, I moved to LA June of 2018.

So, was music your first love? How did you get into it?

Actually… I mean it was always there. Like as a child, you know, I’d sing in the shower, my mom put me in theater music camps, but it wasn’t always my first priority. I was always an active child. I actually did a lot of sports. So when I was in eighth grade, freshman year, I actually tore my calf muscle playing soccer. And I just had to find something to do with my life, so I started singing again and I started taking it seriously probably like junior, senior year and then I applied for performing arts school. 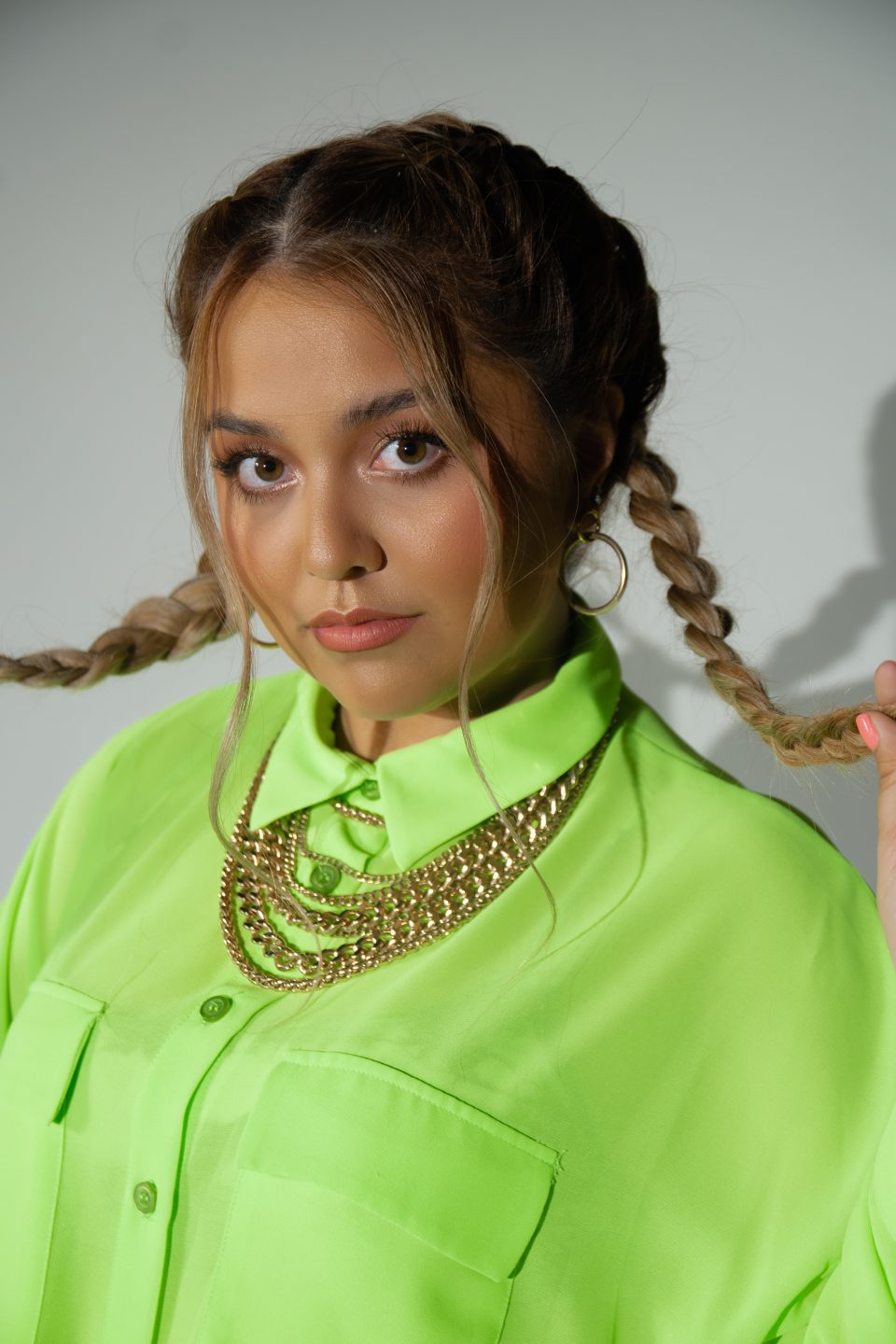 Singing wasn’t even your first interest, but you’re so good! So, if you didn’t sing, you’d be a soccer player?

Thank you! Honestly, I think I would’ve been an athlete, yeah, because I would go to San Francisco every summer and do soccer camps. [No,] but I actually think I would be a stylist.

So who are your inspirations, fashion-wise?

Locally, my stylist Daryl Chang. Love her. She’s the sweetest person ever, and I just love that she’s very unique. Very, very unique. Other than that, I kind of just go on Hypebae and just look at random photos. I thrift a lot of my clothes, actually.

Yeah, here or anywhere I go.

Okay, now we need to know. Where do you thrift in Manila?

You know Makati Cinema Square? (Laughs) There! Whoops. I love it there. 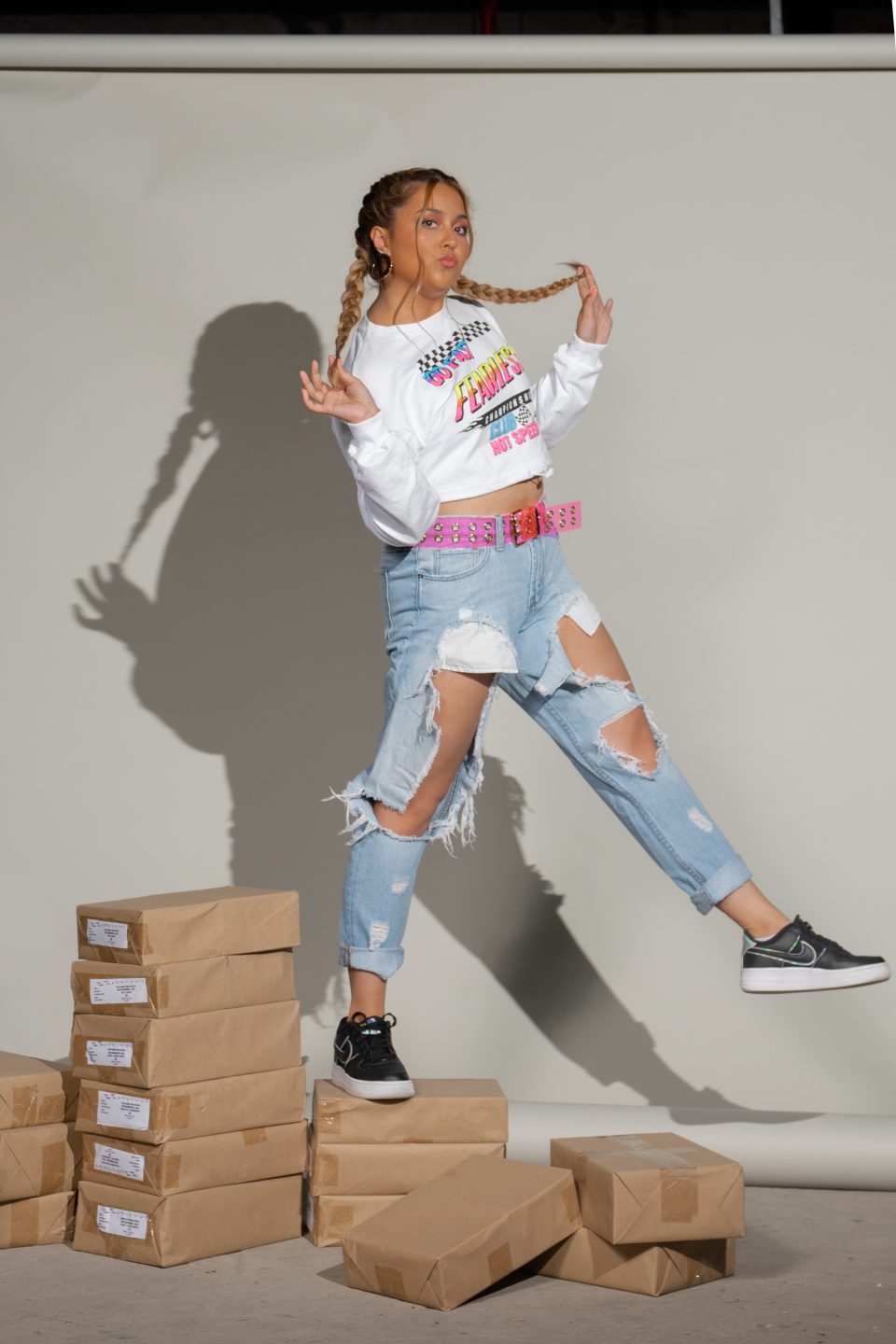 No it’s fine, we go there all the time! How about music inspirations?

How would you describe your music, then?

I also watched the music video for “Just My Type,” and Rob Schneider was there, and Marlon Wayans was there! Were you a White Chicks fan?

Hundred percent. Hundred percent! Yes. So, that was like the first grown-up movie I watched as a kid. “Grown-up movie.” (Laughs) So when my manager and I were looking to cast people, we actually were like, “Terry Crews.” [He’s] such a big contrast from Rob Schneider, because we wanted some sort of like Filipino representation, apart from me, in the music video. So we were like, “You know Rob Schneider, I’m pretty sure he’d be down to do this!” So, we reached out to his people, he said yes. After he said yes, we wanted a really different-looking person, literally [someone] opposite. So we tried to contact Terry Crews but I believe he was already booked on something else, so we were like okay, Marlon Wayans. And he said yes!

A mood! (Laughs) So aside from Rob and Marlon, who would your dream collaboration be with?

Oh, man. Who do I always talk about? Kehlani. I love her. Shawn Mendes. He’s just beautiful. I love a lot of English artists. Jorja Smith. Raye. Mabel. Like the new generation of contemporary R&B.

How about locally? Any artists in mind?

I love Kiana [Valenciano]’s music. She’s super sweet. Jess [Connelly], I love her music too. Other than that I’ve been gone for so long, I’ve been gone for like three years so I’m so out of the loop! But actually, I just started listening to Careless [Music Manila] ‘cause they’re opening as well, and it’s pretty dope! I’m actually into it, so yeah. Love [them].

You were gone for three years. What do you miss the most in Manila?

My dogs! My doggies, yeah. My babies.

I was just about to ask about Lil A$AP Ferg [Tiana’s corgi]!

Oh, Lil A$AP Ferg! No, but he’s in California! He’s my dog there. But I have two corgis here and two Japanese Spitzes, so I have Kehlani and Tequila.

There’s a theme there. (Laughs)

Yeah, there’s a clear theme there! (Laughs) Those are the corgis. And I have Bean and Bear, Those are my Japanese Spitzes. But my mom has a corgi. We have, like, eight corgis. She has her corgis and one of them is named Cardi. I’m like, alright. Apparently, we really like rappers. 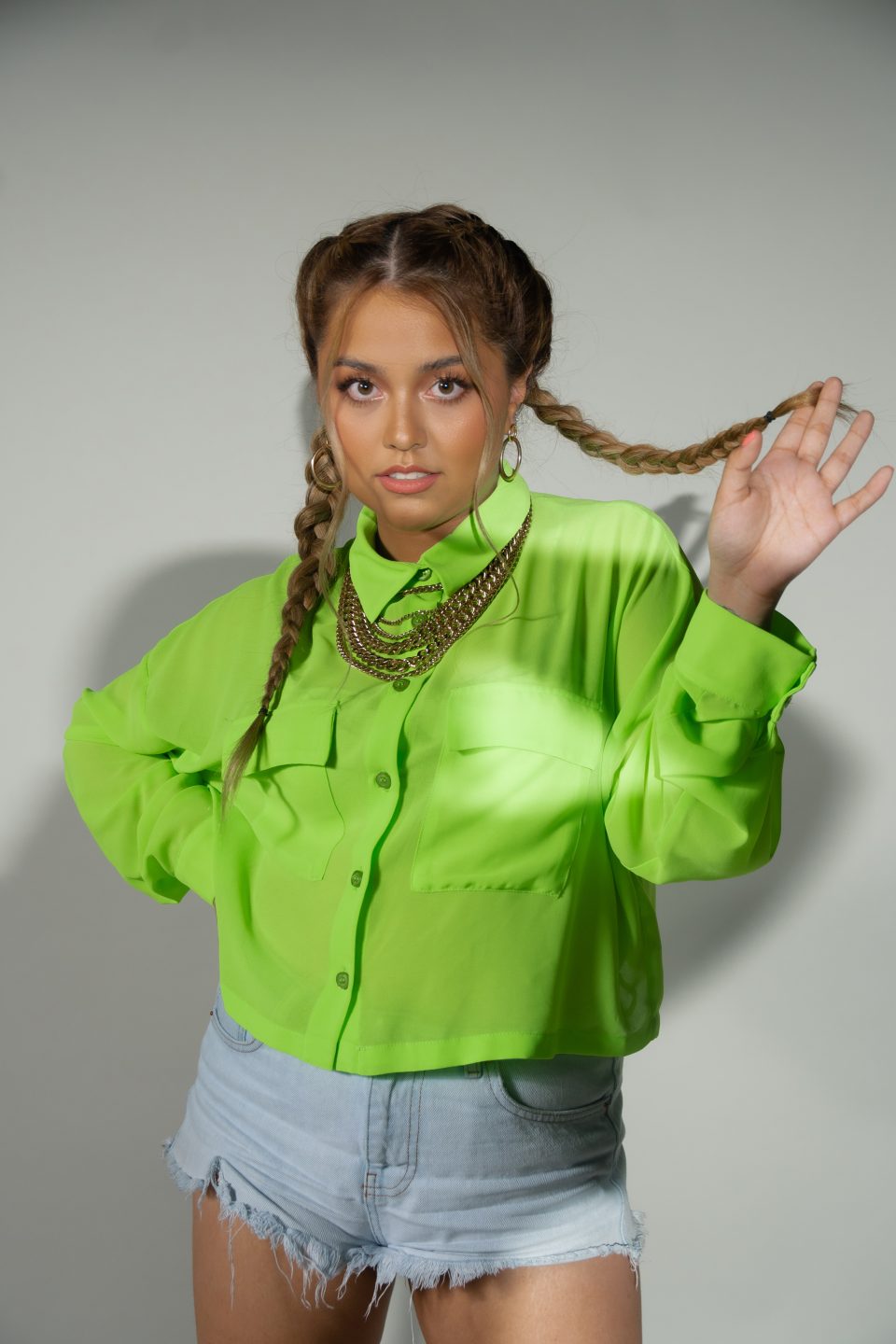 Looks like you do. (Laughs) So Lil A$AP Ferg. Any relation to A$AP Rocky? Is he a godfather, maybe?

(Laughs) You know what? When I meet him, I’m actually gonna be like, listen. I named my dog A$AP Ferg. I know it’s not Rocky, but I feel like you should just know. (Laughs) But actually, when I was looking for a corgi and I saw him, I was with my good friend Marissa, we were just thinking of names for him and it was supposed to be Storm or Star or something? And then it became Alfie, and it became Schmidt, and she said Ferg. And I was like, oh my gosh. A$AP Ferg. That’s him. We named him A$AP Ferg, it’s so weird.

I asked because of course, you’re opening for A$AP Rocky on Thursday. Are you excited?

So hyped. It’s my first show ever here! It’s gonna be fun to see all my friends and familiar faces in the crowd. My mom’s gonna be here to watch and to support, so I’m really looking forward. It’s actually gonna be my first show though without my dancers. So… (laughs). I’m gonna have to really amp it up. But I’m really excited!

We hear you’re also gonna be playing some songs off your EP. What’s the vibe of your EP going to be like? What can we expect?

It’s about love. Heartbreak. Youth. Very, very familiar themes, but not a familiar sound. I always try to bring something new to the table wherever I go and whatever I do. So yeah, expect something you’ve never heard before.

Remember how in the “Chamber of Secrets” Dumbledore canceled all exams because of...

Campy murder-mystery horror is a thing and we are here for it.   ...